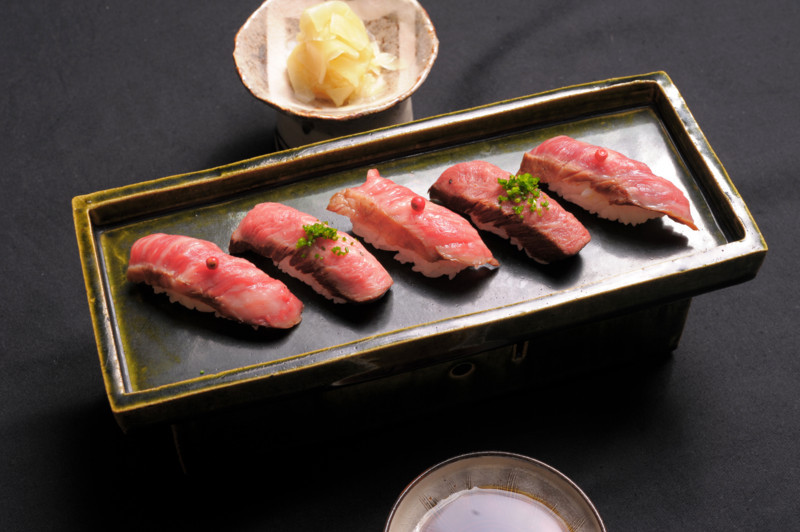 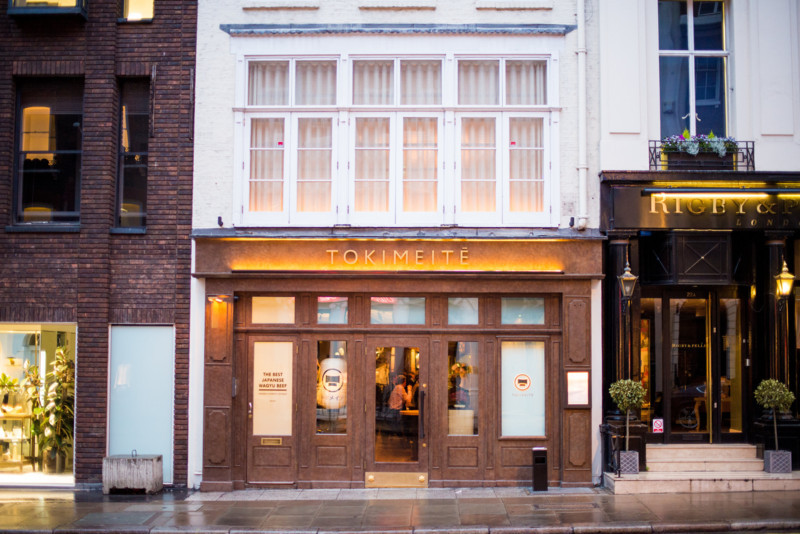 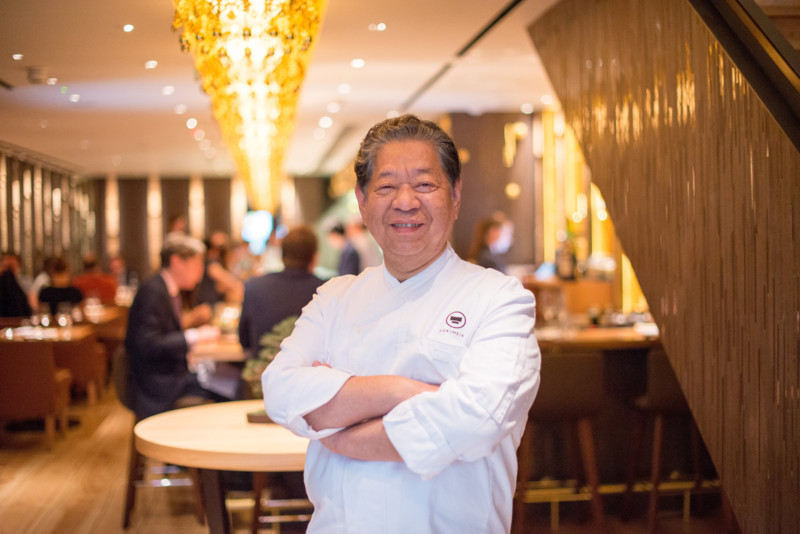 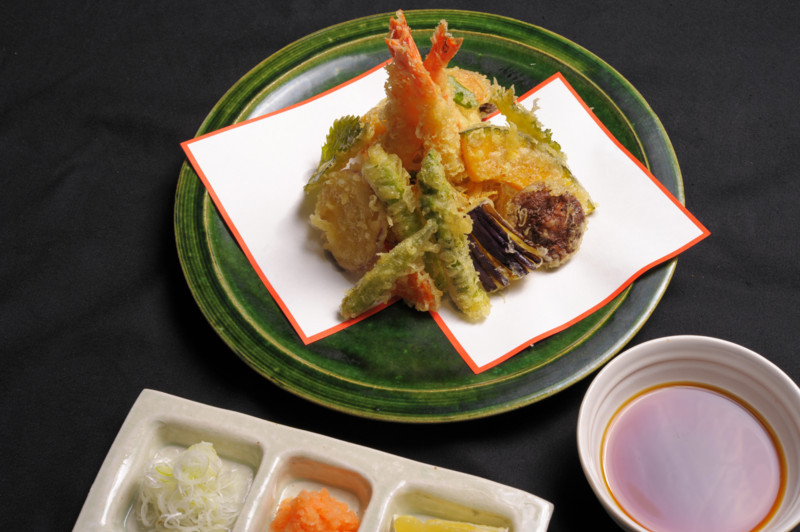 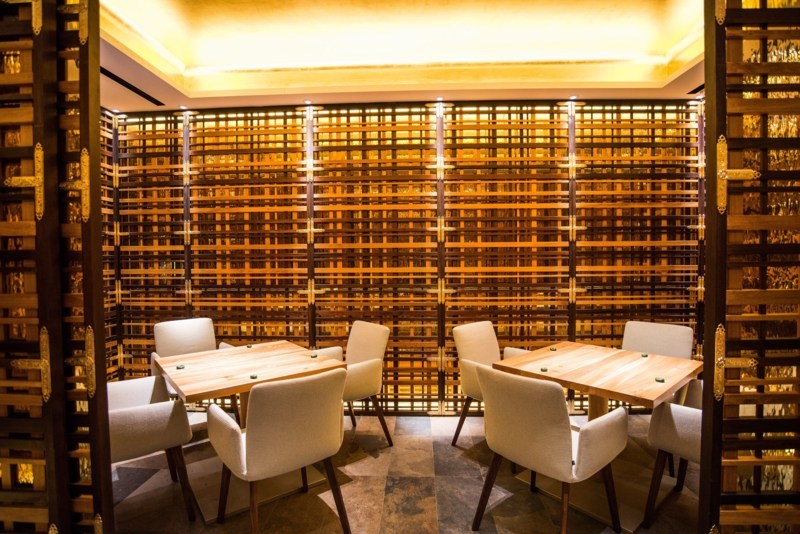 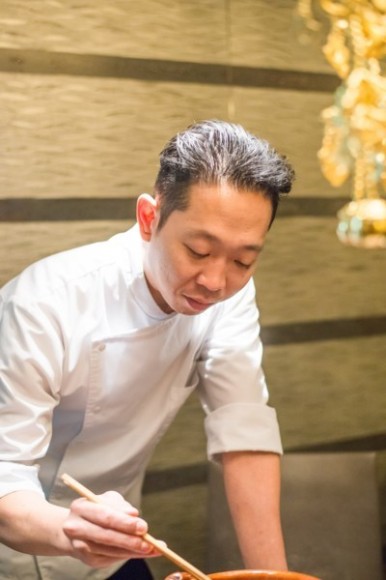 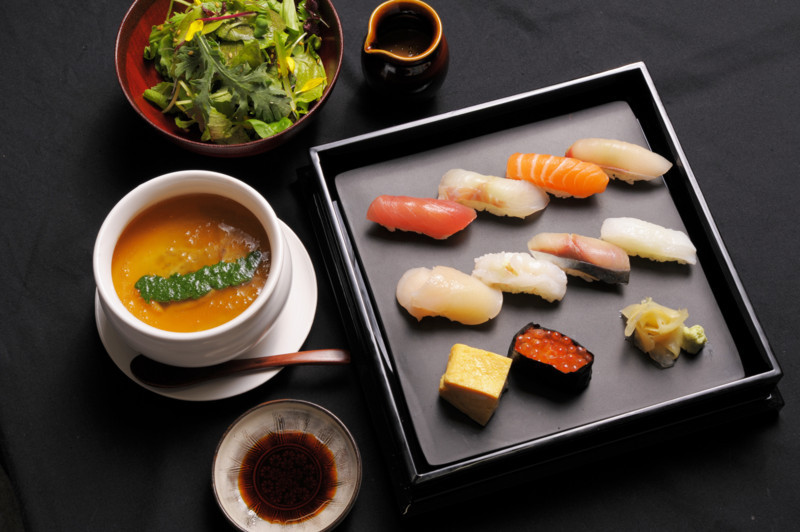 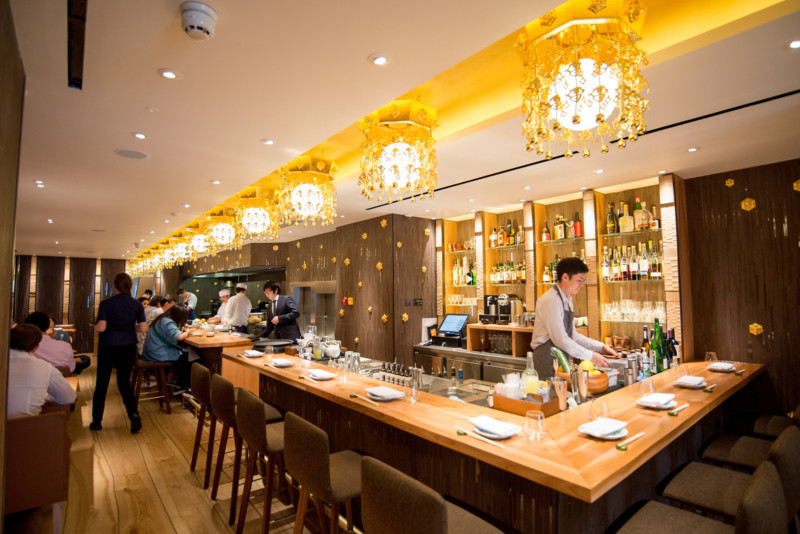 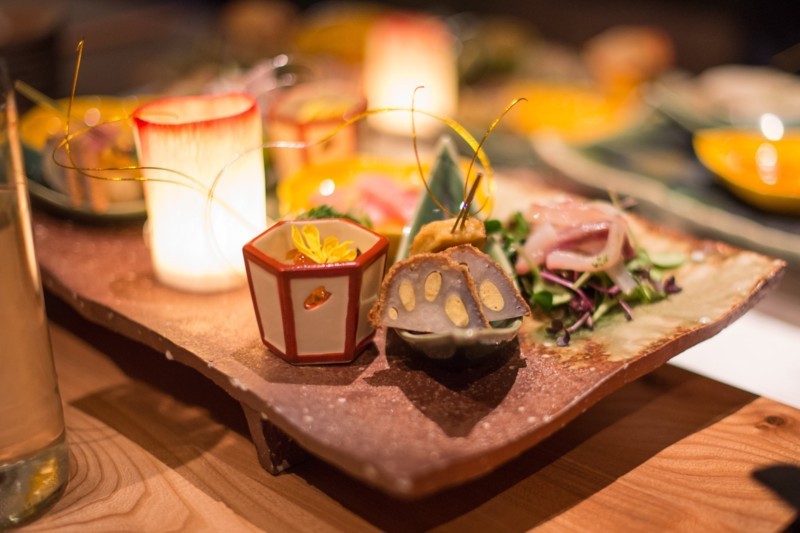 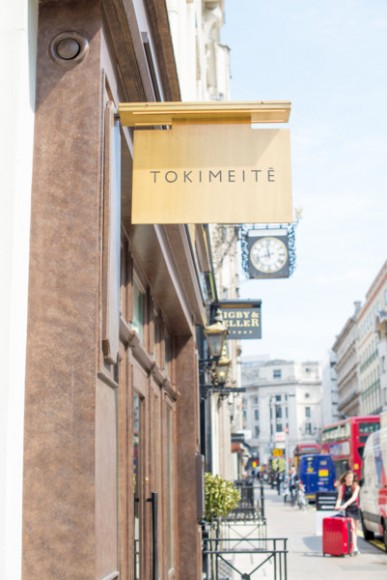 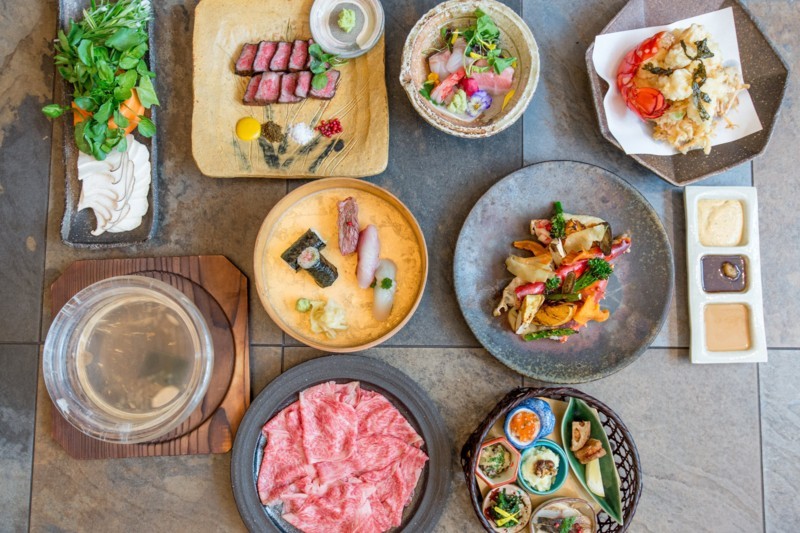 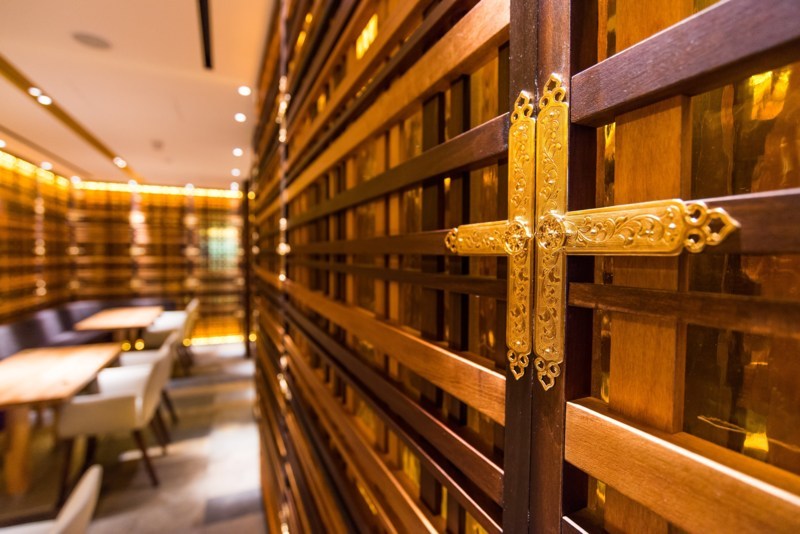 The chance to dine with a globally-celebrated chef who holds seven Michelin stars was certainly not one that The Review could turn down. On learning the evening would be partnered by Suntory whiskey, we were even more intrigued. A whole meal accompanied by spirits? Could it be achieved, and how so?

Having previously eaten fugu, the famed poisoned blowfish, there is always trepidation when approaching a Japanese cuisine. The best chefs can prepare the delicacy with just enough poison retained to numb or tingle the lips. I needn’t have worried, as my destination lay in Mayfair – and besides, Fugu isn’t allowed to be served in the EU.

It was most appropriate that my senses were on high-alert as, on arriving at Tokimeite, the reason for the restaurant’s name immediately became apparent. ‘Tokimeite’ is the sensation of high-anticipation or butterflies in the stomach that they hope visitors feel when dining there. The surroundings alone can get a diner excited about what they are going to undertake and experience.

The restaurant is set over three floors, designed to celebrate elements from Japanese seasons and temples. The ground floor is inspired by fire, and features dappled golden koi lighting alongside an open kitchen spitting flames used to sear food to perfection. This serves as sensory canapé for what is to come.

The first floor evokes the contrasting mood of water, the glass on the windows is rippled like a waterfall, and is very reminiscent of the Japanese ritual Misogi – or ritual purification. A collection of antique ceramics on the walls echo the watery tears. The back of the first floor brings forward the element of wood, with warm colours and tactile woods borrowed from Japanese shrines. The design was conceived by the acclaimed Yasumichi Morita and works perfectly and harmoniously.

Chef Yoshihiro Murata is arguably Japan’s greatest and most respected chef. Chef Murata, who holds a total of seven Michelin stars across his three restaurants in Kyoto and Tokyo, continues to play a mentoring role for chefs worldwide, collaborating with masters such as Ferran Adrià, Alain Ducasse, René Redzepi, and Heston Blumenthal. A unique pedigree that only served to heighten the anticipation. As having dined with all of them, I was keen to see if I could spot the origination of some of their influences.

Chef Murata’s speciality is Washoku, which is the traditional form of Japanese cuisine and recognised by UNESCO as an important part of the world’s cultural heritage. In its purest form, Washoku is known as Kaiseki, and dates back to the ninth century. Chef Murata is seen as the master of Kaiseki, which features seasonal vegetables and fish, and is renowned for its low calorie count. The word – literally “rock held to one’s bosom” – refers to the hot rocks Buddhist monks carried under their robes to stave off cold and hunger. I was a little concerned if I would end the evening replete, and whether there would be enough to parry the accompanying whiskies.

Kaiseki is an artform that balances the taste, texture, appearance, and colours of food.

To this end, only fresh seasonal ingredients are used and are prepared in ways that aim to enhance the flavour. Local ingredients are often included as well.Finished dishes are carefully presented on plates that are chosen to enhance both the appearance and the seasonal theme of the meal. Dishes are beautifully arranged and garnished, often with leaves and flowers, as well as edible garnishes designed to resemble natural plants and animals. The other thing you need to know about Kaiseki is that it is multi-coursed, and on the evening we visited, we were treated to a tasting menu of no less than sixteen courses.

Service, as you would expect in a Japanese restaurant, is efficient, informal and polite. Given the restaurant was full, we experienced no delays and the staff struck a perfect balance between erudition and service. I have, in the past, found traditional Japanese service a little subservient, although this wasn’t the case here.

From moment one, the execution was as impressive as you would expect from a master of his craft. A selection of starters arrived encompassing what can only be described as chef dotting tastes across the full palatal range.

Selected starters arrived in a multi-partitioned bento box. These included slow-cooked and smoked wagyu beef that melted on the tongue in pink perfection, lifted by a mustard of distinct heat and lightness. This was followed by a grilled cured mackerel served with saffron sushi rice, pink pepper and pickled turnip. The quality of ingredients and concepts of Kaiseki simply shone through. Beautiful colours and textures meeting in a kaleidoscope of tastes showcased this approach. The grilled cured mackerel, delicate and smoky, provided the perfect transit to a seasonal vegetable follow up.

When they arrived, the char-grilled Japanese aubergine with ginger and dried bonito flakes did not disappoint, expertly and daintily charred. My only criticism is that some of the ingredients were influenced by the close proximity of their neighbours, which was little confusing at times.

As you would expect, with fish as a stalwart of Kaiseki, there then followed an impressive array of sashimi and nigiri sushi. The rice had clearly been finely polished and prepared with great attention to detail. The balanced rice vinegar had clearly been selected by the master to work with the finest array of fresh fish assembled west of Billingsgate. The salmon was thin, and sweetly fatty to the taste.

We were then treated to the heavyweights of Chef’s repertoire: a main course of wagyu sirloin arrived wrapped in fig leaves and served with fig and onion. The sweetness of the latter two complementing the rich, dark-red meat. My personal favourite was the Scottish lobster awayuki gratin truffle which followed. This showed vintage cookery reincarnated with the sweetest Scottish lobster, skillfully prepared, and accompanied by a truffle meringue. The lightly-crusted, soft, foamy texture oozed and mixed perfectly with the firm, sweet crustacean.

Japanese desserts, in my view, can be particularly underwhelming. But after having my tastebuds played like a shamisen, the hoji-cha ice cream, with its distinctive roasted-tea edge, and the light, steamed Matsukaze cake seemed the appropriate close on this occasion.

Yoshohiro Murata is undoubtedly a master of his craft. The nuances he has added to those he has mentored are clearly visible. That said, he also has a strong brigade behind him, led by executive chef Daisuke Hayashi, who has clearly been trained well at Murata’s hand. All fresh ingredients are prepared with great skill and accuracy, and the aesthetic of the dishes is just as important as the inspiration and philosophy behind them.

Japan is often seen as a place of fads and fashions, but I’m in no doubt that the cuisine at Tokemeite is about as authentic as traditional Japanese can get in the UK. Chef Murata’s interpretations push his food into the twentieth century, whilst still holding the principles of Washoku true. And the whisky? That deserves an appreciation of its own…


Error: Access Token for thereviewmagazine is not valid or has expired. Feed will not update.

I should start by talking about the provenance of the local area, of the coastal beauty of South Devon, and the steeped history that the Cary Arms and its outlands hold. I should regale you with grand tales of the gaff yawl “escape” and the vision as she rounds Long Quarry Point.