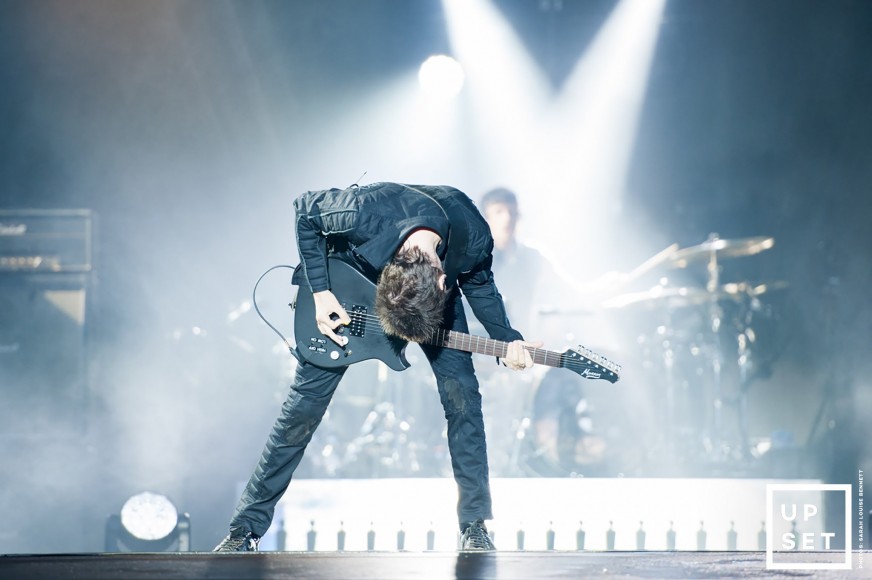 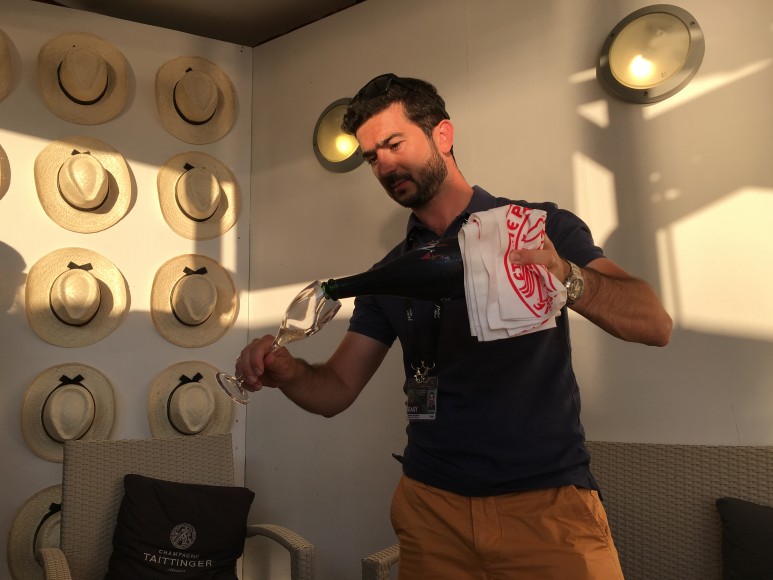 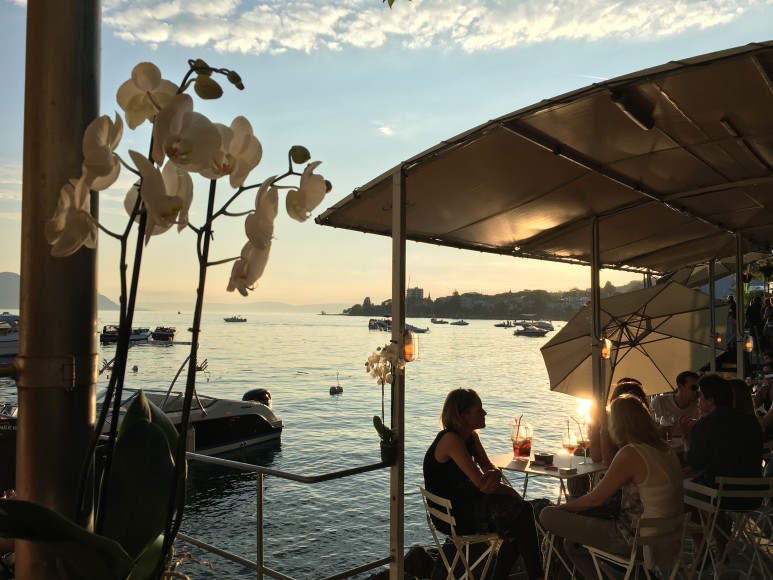 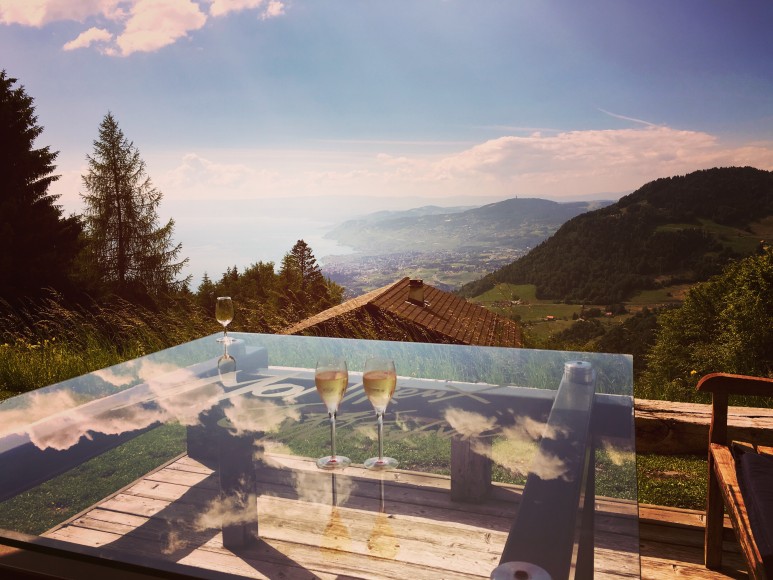 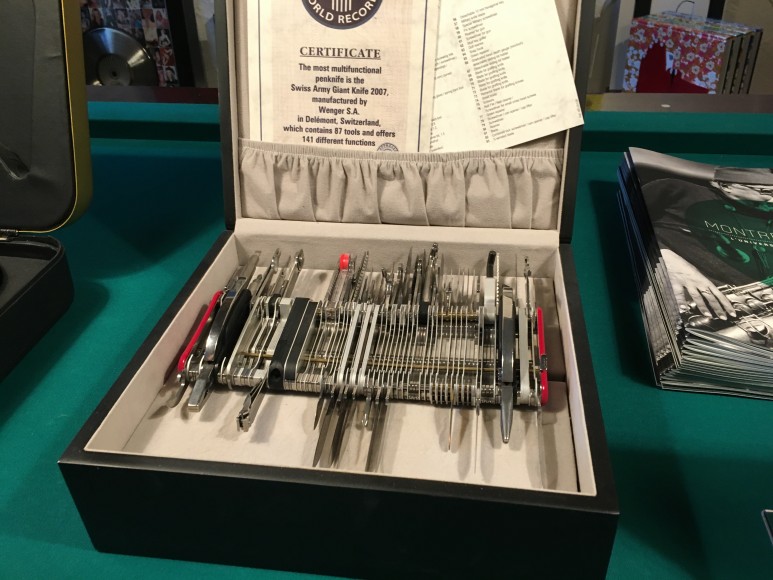 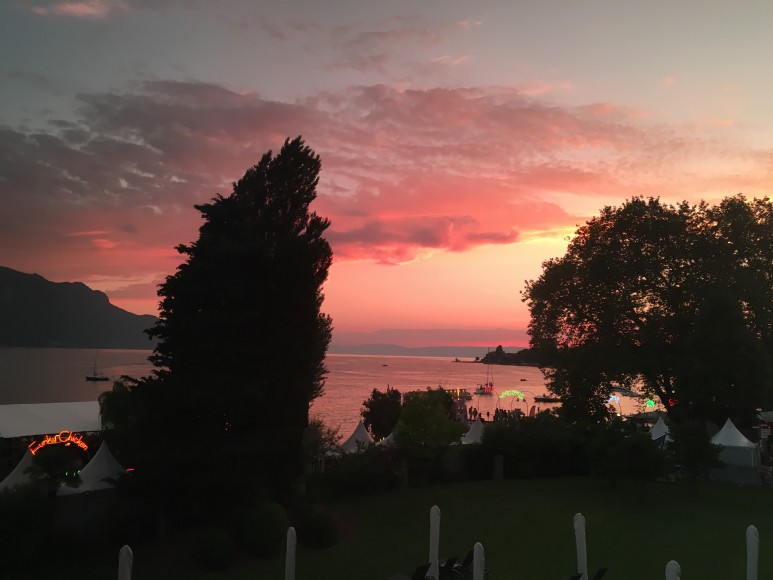 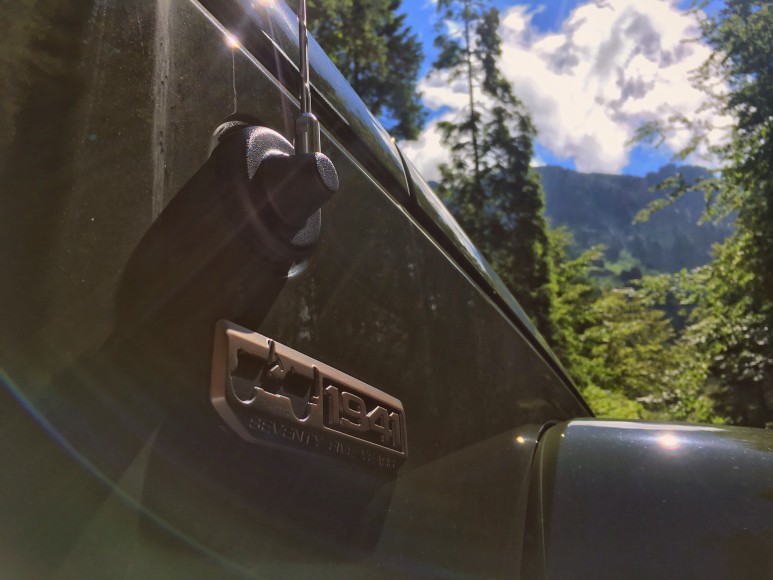 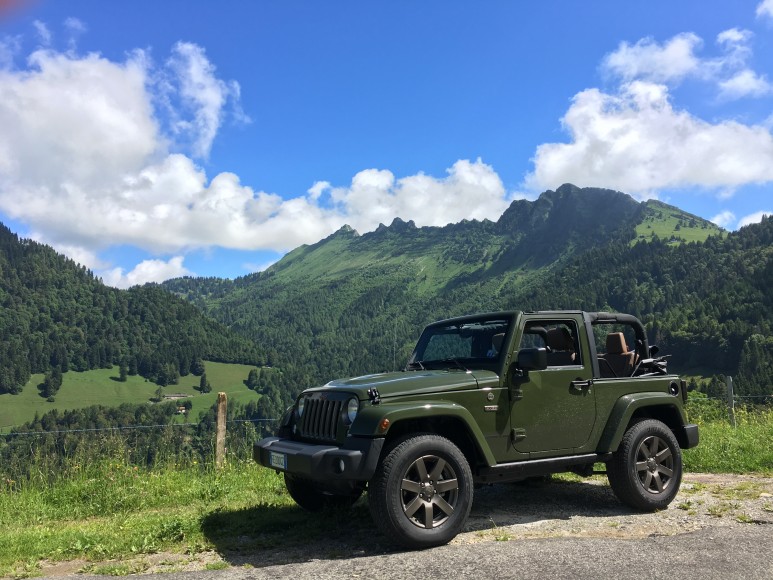 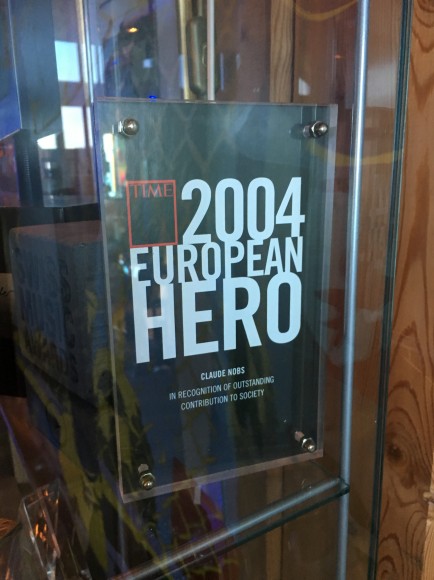 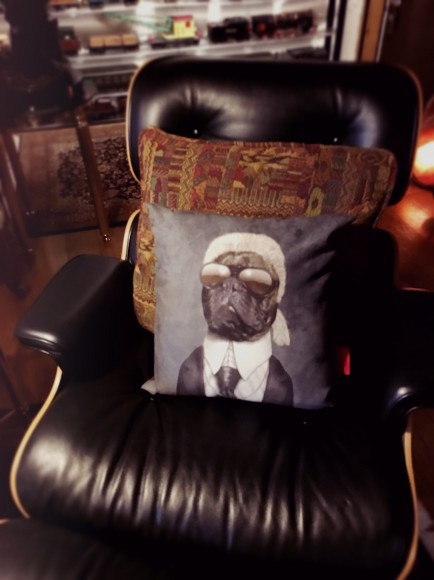 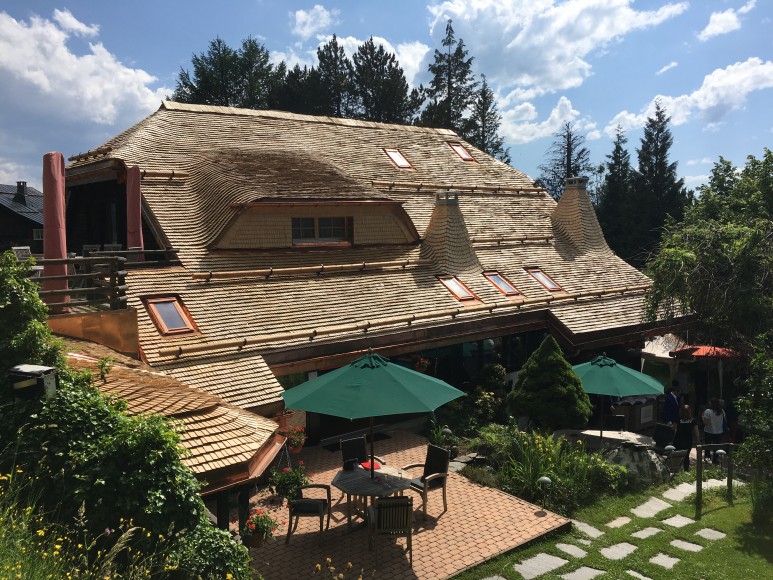 What would Johnny Hodges think of the Montreux Jazz Festival? Born in 1906, Johnny Hodges’s became the most famous featured soloist in Duke Ellington’s orchestra for over 40 years. Renowned for the beauty of his tone and his mastery of ballads, Hodges was among the most influential saxophone players in the history of jazz. He also had a penchant for detail, commissioning some of the worlds most elegantly detailed, bespoke saxophones in the world.

Longevity and detail were clearly important in Johnny’s life. Hailing from America, he would approve of our transport as we move around the Montreux Jazz Festival. Halfway through Johnny’s illustrious career, what would become a unique lifestyle brand emerged under the clouds of war. Then known as the General Purpose, this soon became ‘GP’ and then in due course “JEEP”. Jeep have now celebrated their 75th anniversary and this has been done in Hodge’s style, with some great detailing to back up their legendary off road performance.

Offered on all models in the range, the celebratory series is produced in limited quantities and stands out for its new and exclusive special livery, the “75th Anniversary” exterior badge, low gloss bronze wheels, bronze and orange exterior accents, and exclusive interiors with seats featuring an embossed “75th Anniversary” logo. The package is made even more appealing thanks to the generous standard equipment and outstanding Jeep technical contents, in terms of mechanics, off-road capabilities and much more.

During the Jazz Festival,  Montreux becomes ‘Jeep city’ transporting artists, organizers, guests and sponsors. You cannot turn a corner without encountering a Jeep in one shape or another. The Montreux Festival is itself fifty years old and been visited by legendary names from the international jazz, blues, soul and rock scene. Montreux has seen performances by artists such as Nina Simone, Ella Fitzgerald, Deep Purple, Bob Dylan, Van Morrison and Alannis Morrisette.

The Review’s first Jeep encounter is with a Cherokee and initial impressions are of a vehicle with some real road presence. It’s love it or hate it angular nose with trademark Jeep seven bar grille hints at its purposeful nature and its “Trail Rated” badge at its off road capabilities. The latter is a clever way of helping customers to determine which Jeep is right for them, as all Jeeps are given a trail rating for different terrains when tested on the world famous ‘Rubicon Trail’ in Sierra Nevada. Our Jeep immersion involves a far more urban environment in comparison around Montreux, Lake Geneva and the Swiss Alps.

The legendary chalet “Le Picotin” lies one thousand metres above Lake Geneva. This was home to Claude Nobs who founded the Montreux Jazz Festival. The Jeep’s Multijet diesel 2.2 litre took the one thousand metre climb without even batting an eyelid. Surefooted, as it headed ever upwards, the nine speed automatic changed smoothly as it climbed into the alps. This is no Baja entry though. Sure it can pull the skin off a creme brûlée, but is behind class in the speed stakes. This can be forgiven, as it is not the purpose this vehicle was designed for, and its torque is undoubted.

It is important to remember this is a truly capable four wheel drive vehicle. The on road handling however is a bit wallowy and there is little feedback from the steering. Neither concerned me, as the overall package gives great confidence in that it will go ‘anywhere’ you point it due to its tons of traction. The bias of this car has clearly been set to take on modern life with a very soft ride and light steering and should satisfy most people. There was no need to activate the available low gearbox mode but it was reassuring to know it was available should the need arise and the going get very loose. It also stands as testament for this vehicles capability and intention to live part of its life off road if required and via an engineered rather than electrical solution.

Arriving at the Montreux’s founders home you cannot fail to miss the copper guttering and unique design. Nobs’ residence has become a genuine museum, a must-see venue for any respectable music lover. The four floors of the cottage showcase archive photos, miniature locomotives, different coloured juke-boxes, old motorcycles and an extensive range of musical instruments. This gem is further embellished by his collection of records which includes close to 45,000 titles. One of the most treasured items is the kimono which Freddie Mercury gave to Claude Nobs when he lived close by the traditional Japanese costume is now exhibited at the Montreux Jazz Café.

In 1971, Deep Purple mentioned Claude in their timeless song: “Smoke on the Water”, which was inspired by a headline-making event which took place in Montreux: a fire which blazed in the Swiss city Casino during a Frank Zappa concert. Nobs saved a number of youths from the flames and Deep Purple commemorated this in the lyrics: “Funky Claude was running in and out pulling kids out the ground”.

As we head down the mountainside and navigate the surrounding countryside there is certain feeling of invincibility and utility about the Cherokee. The interior has a premium feeling dashboard, however plastics below dash level are of a much lesser quality, this is in keeping with the use the vehicle is likely to see, but not for it to be a luxury SUV contender. Cherokee is well kitted out with up to an eight inch touchscreen, six-speaker stereo and 17-inch alloy wheels. The system is bright, easy to use and better than some other premium SUV’s. Bluetooth is standard for both calls and music streaming making the cabin easy to work within. Automatic headlights and wipers are also standard, as are a power tailgate and leather-wrapped steering wheel. Overall, headroom is good but the rear seats can feel lacking in legroom even with the bench seat fully adjusted back.

You can’t help but feel that to truly understand the capability of Cherokee that you need to exercise it within an off road environment and you get the feeling that it would then exceed expectations. On the road the vehicle has undoubtedly been compromised to retain its off road ability. To be able to perform well off road there can be no compromise in this regard.

Johnny Hodges would, no doubt, recognise the subject of our second Jeep encounter. The DNA is evident at one glance that the Wrangler is the closest to the original ‘GP’ and as such has become an icon. I remember someone saying to me once of Wrangler – “what is the point?” My reply- “does there have to be one?”

This is an adept, unbeatable off roader wrapped up in a whole lot of fun. There is no compromise in sight. At the wheel the driving position is upright, you can see the total dimensions of the vehicle and the avaricious glances from the pavement.

The interior of the Jeep Wrangler gives you the feel that you are in an indestructible vehicle, the plastics are solid and buttons are chunky and require very positive input. Doors shut with a reassuring clunk and every part of the hood mechanism requires maximum input to take it up and down. Our variant was the 75th Anniversary 3.6 V6 Petrol pushing out 281bhp and linked to a five speed auto. A great 256lbft of torque able to propel you wherever you want to go.

The simplicity is reassuring, select low gearbox and you can head offroad and embrace the vehicles ‘go anywhere’ attitude. Limited slip differentials also add to that feel. There are no electronic gizmo’s here to control your mud plugging. That said there is a premium sound system with sat nav, thick leather seats and 18 inch alloys that add the detail which say this could be very easy to live with and perhaps more practical than people think.

Driving into the alps it feel like the amount of rubber in contact with road is peeling up the tarmac wherever you traverse. This is the only time you welcome road noise; proving how unstickable this car is. On opposite lock slaloming downhill the tyres chirp as you control steering and accelerator together for maximum squealing enjoyment whilst the engine burbles away.

Ultimately Wrangler is really a lifestyle option full of choices. You have to decide between petrol like our vehicle or the diesel in a 197 bhp guise; there is however something indulgent and ‘very right’ about the big muscular petrol engine. There are soft or hard top options, the bulky latter requiring somewhere to store after removal. We mustn’t also forget that the larger four door version is probably now the most creditable and only ‘proper’ utility off roader with Land Rover’s Defender gone.

Whilst driving a Wrangler you do feel inextricably linked to history. The images of American G.I’s jumping Jeeps into battle in WW2, the MASH style exploits of Vietnam and the film and television appearances from The Thomas Crown Affair to Billions all reinforced the true iconic nature of the car. Jeeps 75th Anniversary celebrations are as pertinent as they are in their intricate commemorative detail. In summing up this vehicle how would the iconic Johnny Hodges or as he was later known Johnny “Jeep” Hodges put it? Well, he would probably put his highly detailed, great alto sax to his lips and play his biggest solo hit- “This Jeep is jumping.”

Walking in my fathers footsteps

My love affair with Machu Picchu started when I was in my mid twenties whilst working with an American airline to promote the richness, diversity and beauty that Central and South America has to offer. Hours of putting brochures and ads together to promote this part of the world meant that the iconic image of Machu Picchu was imprinted on my soul early in my adult life. Even before “bucket lists” were de-rigueur I knew Machu Picchu was on my list. My desire grew in my 40’s when, having just had my son, my amazing 74 year-old Dad announced that he was going to walk The Inca Trail. Something he…