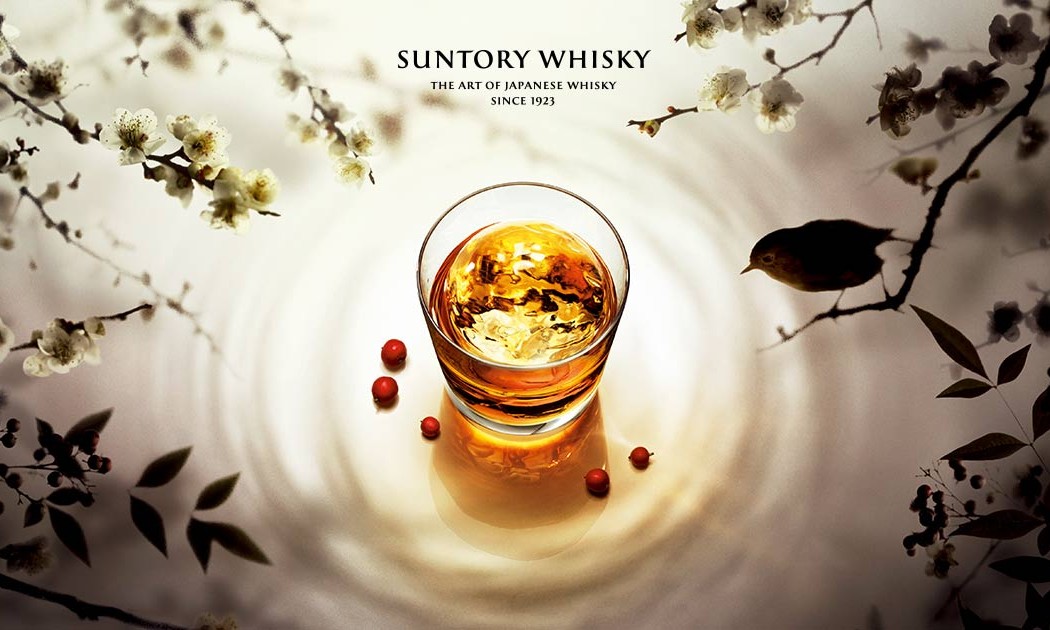 For The Review, an audience with Mike Miyamoto, Ambassador for Suntory whisky, is to gain a portal to over thirty-nine years’ experience in the industry. Having undertaken everything from running a cooperage business to blending, and eventually running Japan’s most important whisky distilleries, Mike can be seen as an sensei of grain-based spirits in his own right.

During the eighteenth century, the Japanese began to discover a taste for whisky, with small-scale production beginning in Japan around 1870. But Mike is keen to point out that the first commercial production was in 1924, with the opening of the country’s first distillery, Yamazaki, near Kyoto.

Food and whisky are inextricably linked in Japan; the Japanese palate is very subtle with natural flavours at the forefront, accompanied and supported by the potation of choice.

Shinjiro Torii, the founder of Suntory’s Yamasaki distillery, immediately identified that he would have to create a subtle, refined and intriguing spirit, if it was to enhance the dining experience. This approach went hand-in-hand with the desire to produce a drink that expressed the enhancement of nature through craftsmanship. It could be said that he was a pathfinder, and would be quite at home with the operations of today’s artisan boom, particularly in the gin sector.

Torii’s production approach was so trailblazing because he took only one inspiration: Scotland. He intentionally selected topography and weather conditions that were completely different to whisky’s homeland, in his quest for an indigenous product. The bourbon states of Kentucky and Tennessee bear more resemblance to the Japanese climate than anywhere else on earth. This weather manifests as cold winters and hot summers, allowing more variance in temperature during the ageing process. This results in faster maturation and allows for more influence from the barrel. This increases vanilla notes, and also the clarity of colour of the various malts. In style, Japanese whisky is closest to the Scottish – however, his approach can be seen as radical as trying to produce a Chablis-style wine in Northumberland.

This approach was once again seen in the late 1930s when Suntory introduced the Mizuwari – the concept of blending whisky with water to allow it to be paired more effectively with food. This is now seen as mainstream practice in Japanese foodie society.

In some ways, the Japanese method is more authentic in representing their own brand and regional variation than its forebears. This is because whisky companies in Japan own both the whisky brands and the distilleries themselves. In Scotland and Ireland, it is common practice to share stocks when producing blended spirits; whereas in Japan, any blended whiskies will be produced only from in-house production.

Japanese distillers can still show entrepreneurism by their use of different types of still, tests, grains, and use of casks. This is evidenced in the use of sherry casks, oak bourbon casks, and Mizunara, the Japanese oak, all of which they can call upon to add flavour and colour.

These various approaches allow Japanese distilleries to produce a wide range of styles from peaty, Isles-style to floral and light representations more akin to Spey. These days, we all search for authenticity. Now it is third-generation master blender Shingo Torii who has taken up the family mantel, challenging the concepts and manifestations of Japanese whisky.

And how to drink your Suntory? You can consume Scottish-style, particularly in the case of single malts, or alternatively with some Japanese theatre as a ‘highball’. For the latter, pure glacier ice is hand-chiseled into a perfect ball and your whisky is served over this and topped with soda. The highball works surprisingly well as a food accompaniment and within the concept of Mizuwari, which Shinjiro Torii originally promoted.

The big question is: which whisky do you match to which food group and which do we favour? The Review has the answer.

Yamazaki is a deep and multilayered whisky from Japan’s first and oldest malt distillery. Water known as rikyu no mizu (water of the imperial villa) continues to bubble up near the distillery and has been designated by Japan’s Ministry of the Environment as one of the best natural mineral waters in the country. The Katsura, Uji and Kizu rivers converge here, providing a unique misty climate. The diversity of this region’s temperature and humidity creates ideal conditions for cask ageing, known as the signature ‘Suntory maturation’.

Appealingly gold in colour. The nose is of zesty fruits and peach with a hint of vanilla and a light oak. The finish is medium to long, bringing on fruitiness and spices of warmed cinnamon and crystallised ginger.

The succulent, fruity flavours of Yamazaki 12-year-old complement delicately grilled lobster and truffle meringue perfectly. It is also a wonderful companion to rich, grilled food, sitting well with yakatori in all forms, and also roasted duck.

We think this is an ideal first step into the world of food matching blended Japanese whisky.

The extra six years gives a deeper amber hue. Immediately on the nose there are dates, raisins and apricot. The palate is one of dark red fruits – blackberry, loganberry, and a touch of cocoa nib. The finish is long, drawn-out and viscous.

Perfect to round off a Japanese dinner, this rounded, full-bodied whisky needs the contrast of a mild-mannered food-matching to perform. Japanese green-tea ice cream makes the perfect partner to this International Spirits Challenge trophy-winning whisky.

This is a big glass for those who enjoy full, lengthy, deep spirits. For those who don’t, steer for more accessible options.

The Hakashu distillery nestles in Japan’s Southern Alps, at an elevation of seven-hundred metres, and is one of the highest distilleries in the world. Built by Keizo Saji to commemorate fifty years of Japanese whisky-making, it takes advantage of its unique forest microclimate to produce whisky of exceptional quality. The water here is unique in its purity, which is a result of filtration through granite of rain and snow.

Straw-light gold in colour. An extraordinary nose of cucumber, mint and melon. On the palate, almost herbaceous, an edge of lemon balm with just a hint of grapefruit. A short yet refreshing finish with a hint of smokiness.

This is a definitely a love-it-or-hate-it offering. We enjoyed its quirkiness, but others may struggle with its intricacies. Due to its freshness, it will pair well with gravadlax, or with crab or scallop.

A deep vintage wine gold accent on pouring. The nose has developed with age to become almost Mediterranean. Immediate accents of basil, almonds, coniferous needles and a zesty green apple. There is an immediacy on the palate of kiwi fruit, stone fruit and a hint of mint. The finish is short but fun, reflecting green tea, poached pear and a subtle smokiness.

This felt like a coming-of-age for us; the development of all aspects result in a whisky which will sit alongside most fish and shellfish from sashimi to grilled bass.

Hibiki means ‘resonance’ or ‘echo’ in Japanese. It is aptly named because there are echoes from all the component Suntory whiskies and distilleries within the blend. Hibiki celebrates the art of blending using both malt and grain whiskies.

A luscious amber presents itself in the glass. A full-perfumed nose of lily, honey, nectarine and dragonfruit prevails with a lemon-thyme note. There is an immediacy behind its caramel and toffee overtones that are balanced with black cherry and vanilla. The finish is pleasantly sweet, preserved fruits then follow with a lychee aftertaste.

There is a luxury to this Hibiki which urges you to revisit it. We had it matched with wagyu beef and it delivered with panache and style. If we were only allowed one selection from the range, then this would be it, due to its complexity and presence. Were The Review to be classified by a Japanese whisky, this would be it.

Sustainable, responsible and impact investing (SRI) is an investment discipline that considers environmental, social and corporate governance criteria to generate long-term competitive financial returns and positive societal impact. Yes, I know, you hear the words fiscal responsibility and you’re already headed for Nantucket. But really, you should be telling the pilot to plot a course for the Svartisen glacier in Oslo.