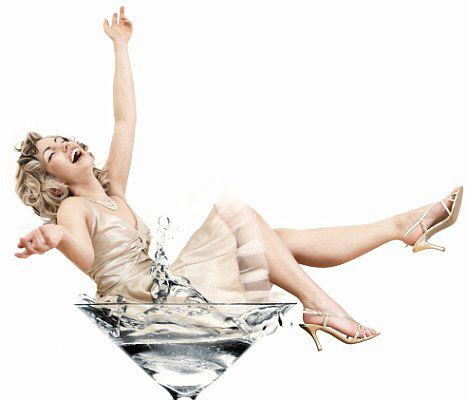 For ten thousand years, ever since human beings settled down to the cultivation of cereals and vines, alcohol has played a fundamental role in society.

It has served as an object of religious festivals, social lubricant, and afforded many unattractive men and woman the otherwise-unobtainable affection of higher mortals.

Suffice to say, heavy drinking has always been part of the British character. Winston Churchill once told: “A lady came up to me one day and said ‘Sir! You are drunk’, to which I replied ‘I am drunk today, madam, and tomorrow I shall be sober, but you will still be ugly.”

For years alcohol manufacturers have been telling us that their particular brand of alcohol will leave us king-of-the-jungle and irresistible to the opposite sex.  The idea is that Jack Daniels is catnip for girls; splash it around your carcass and women will flock to you like plankton shortly before wrestling you for a place in the bed. The reality, of course, is that you wake up in the morning, slightly jaded and alone, with little more than a souvenir of beer mats and a lighter wallet.

The marketing machine of the alcohol industry tends to have less-subtle imagery than Korean propaganda. And yet, every time we find ourselves in a pub, we order our staple beverage regardless of what the marketing minions have suggested might make our paltry lives better. So, in the interest of progression, having accepted that whatever will be will be and you will drink whatever you damn well please, here are some dubious suggestions on how to avoid that jaded, light-wallet feeling in the morning.

If you have any other theories on how to cure the common hangover, then email minesanotherbrandy@thereviewmag.co.uk

Five percent. Only five percent of the ocean has been topographically imaged. This means that 65% of our planet, where you and I live, is unknown. We’ve mapped Mercury and have an incredibly detailed “Idiot’s Guide to the Moon”, complete with ramblers maps which show you how to trek around the international claims of the US and Soviet governments. But comparatively, we know very little of the abyssal plains and continental shelves.