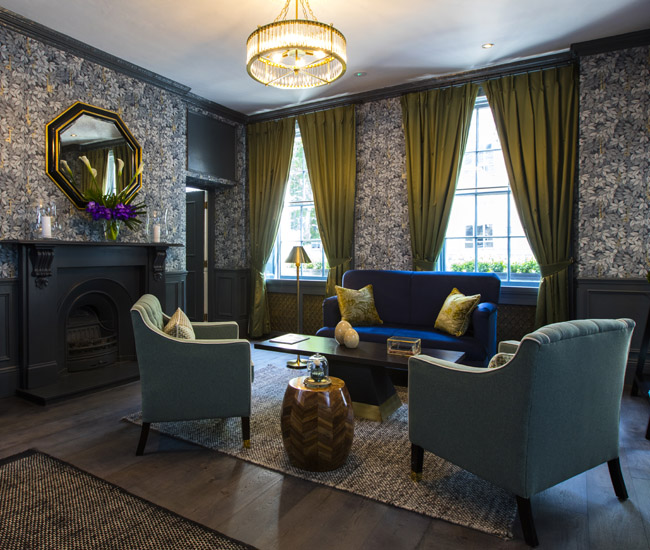 It’s easy to miss The Academy. Standing elegant yet inconspicuous on Gower Street, Bloomsbury, the only thing hinting that you’ve arrived at a hotel is a sign for The Alchemy Bar outside. Comprised of five Georgian townhouses, The Academy’s semi-recent redesign was overseen by Alexandra Champalimaud, whose clients also include The Dorchester and The Carlyle. Characteristically, then, while there’s still a nostalgic sense of l’originale, the design, themes and palette here are quintessentially modern and boutiquey.

I hate to tarnish or expose anyone for having a ‘concept’, but The Academy’s evocation of its literary locale is both befitting and tasteful, with novels by the Bloomsbury Group—Woolf, Forster, Keynes—adorning pockets of the property.

The centrepiece of all this, The Library, is a room that conforms more to afternoon tea than novel-reading, but is nonetheless cute and bookish and well-thought-out. Indeed, the space is inspired by the tale of Mr Ma & Son by Lao She (a copy of which is gifted to me during my stay). And the hotel’s Mr Ma’s Afternoon Tea artfully marries Chinese sweet treats with quintessential British haut.

Back to check-in, and I’m greeted by the hotel manager, Ralf, who’s German, affable, and palpably proud to be captaining the 50-bedroom property. We head for a drink at the aforementioned Alchemy Bar, which is sleek and intimate, with perhaps six or seven tables. But the garden is where this bar really comes into its own; a sip of tranquillity in the glut of the city.

We talk of each other’s backgrounds, our heritage, our families and, inevitably, Brexit. The industry is built on amazing people being relocating to where they’re needed—not least the English. So, who knows what fate’s in store for five-star hospitality in the UK. But the real takeaway is Ralf’s passion for it all. It’s not unusual to have similar conversations with managers who are tired and jaded. Not here. Ralf’s enthusiasm runs through the hotel and its staff, perhaps symptomatic of a “boutique hotel”, with a more specific clientele, that hasn’t got laurels to rest on. At least not yet.

The small staircases and corridors are just as charming as their custodians. Original features are showcased, balancing a taste of the Georgian with a restraint of the modern. The bedrooms and suites follow suit, with touches of deco in such furnishings as the light shades. But mostly, these are rooms you want to stay in: inviting, comfortable and important.

The only thing missing—forgivably—is a place to eat. But Ralf directs me to his favourite spot for lunch: Macellaio’s, an Italian just round the corner, specialising in carpaccio, tartare and steak. I didn’t doubt his recommendation for a second—and I urge you not to either.

The Academy is doing all the right things, for all the right reasons. Its people are smart and professional, and it stands in a class of its own, as bohemian as Bloomsbury’s literary greats, in a city otherwise overrun with sameness and abundance.

I don’t know where to start. It creeps up on me. I could be placating my way through a board meeting, or having drinks with friends, and then I just lose all interest. The situation, whatever it is, completely ceases to amaze me. Life just loses its colour. I try to reassure myself, whilst hopelessly attempting to coax the addiction monkey off my shoulder and back into its bloody cage. I just can’t get enough powder. Before we go any further, and I get a call from my mother (probably to enquire into the quality, rather than express concern) I want to make it clear that I’m talking about snow….