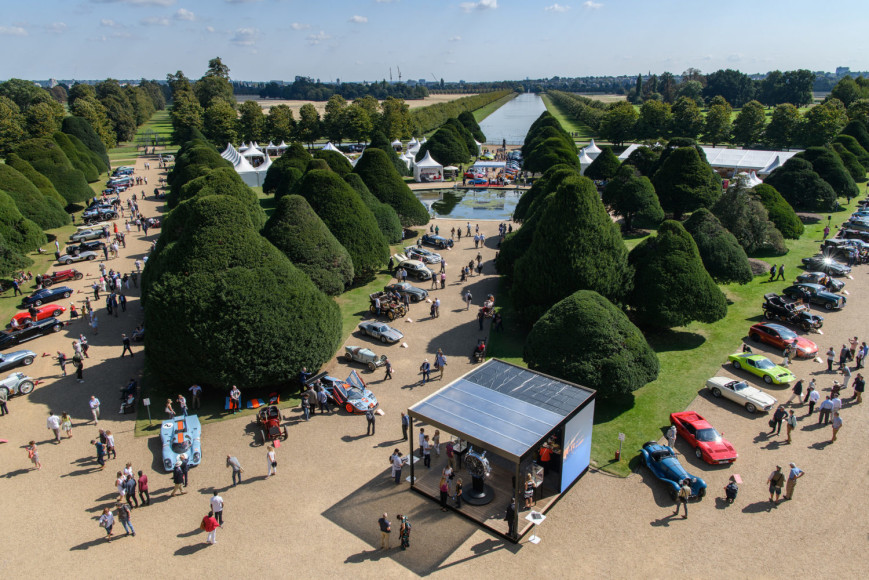 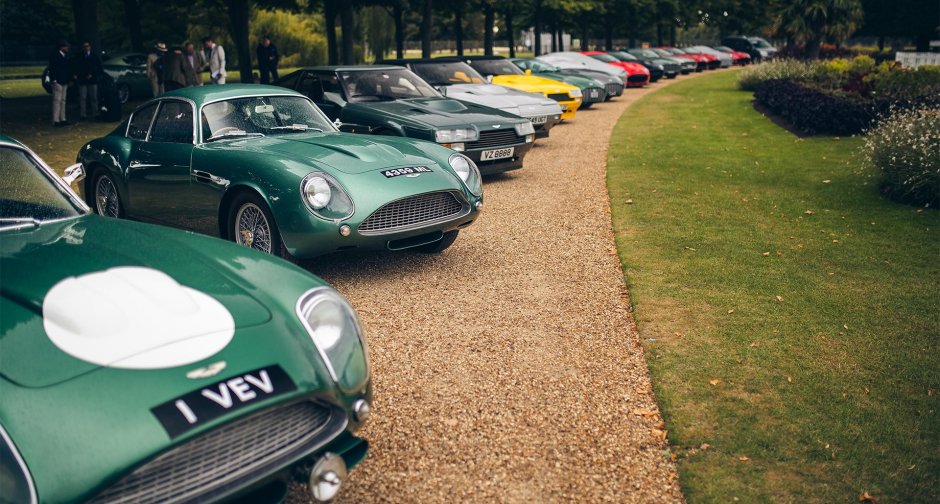 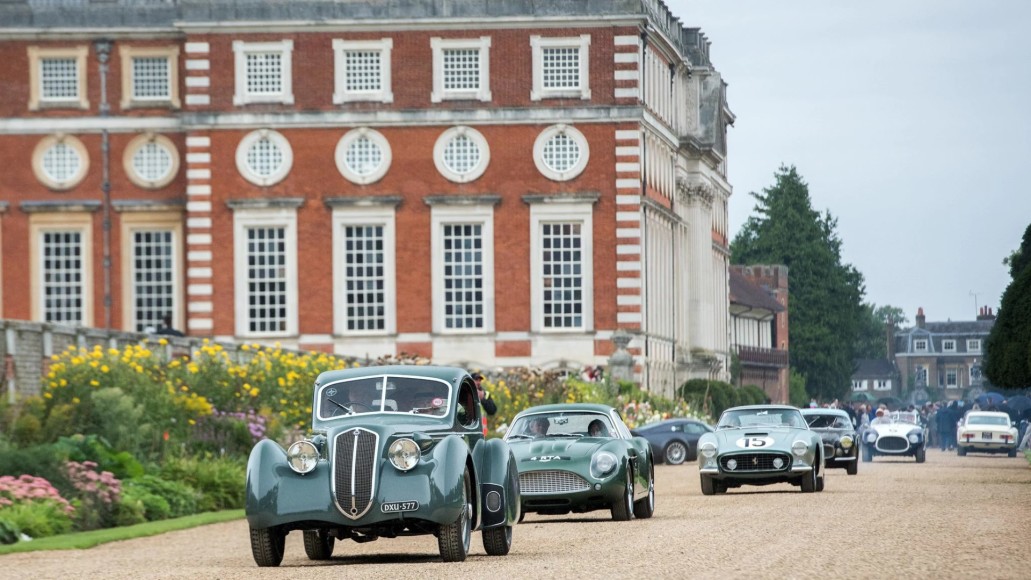 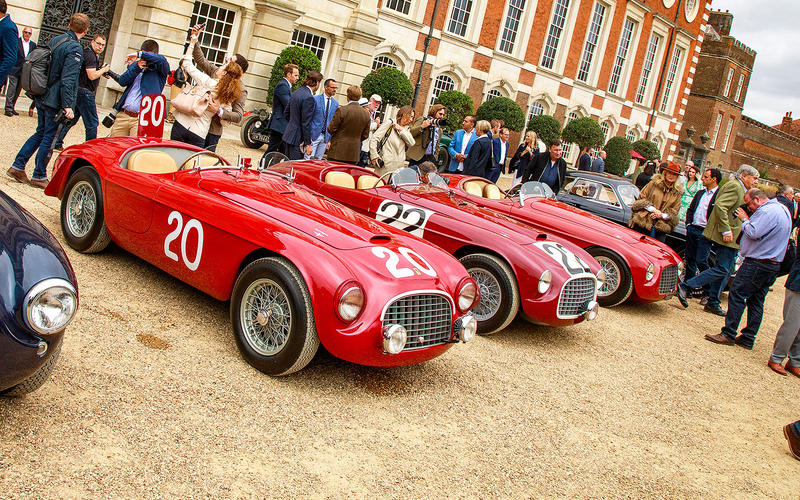 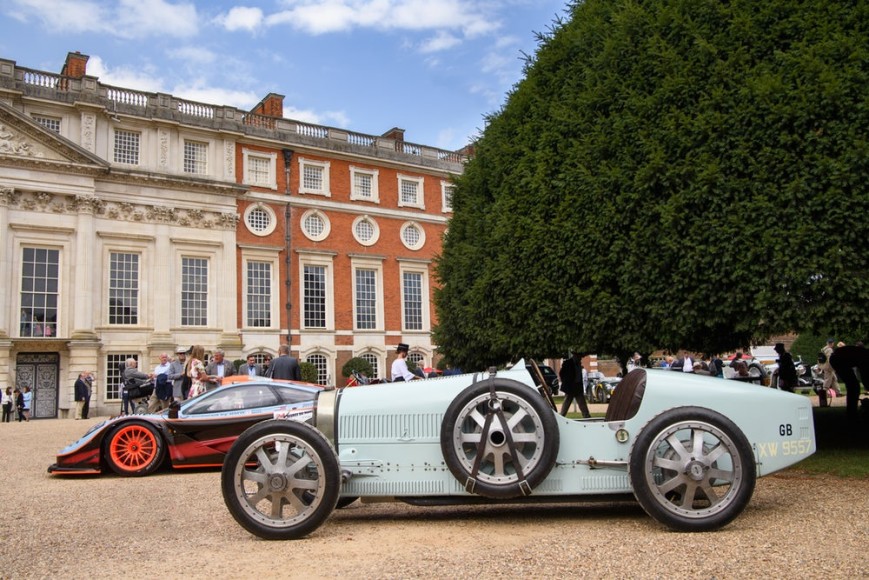 As the sun rose on Saturday the 7t​h​ of September after an up and down year in the classic car world I was interested to see what the turnout and appetite would be for prestigious events such as the Concours of Elegance at Hampton Court Palace.

For the uninitiated; these events consist of horribly wealthy older gentlemen with Panama hats and considerably younger partners. There appears to be an unspoken and unofficial competition each year for depth of tan, size of wristwatch and age gap betwixt partners. I quietly judged this year’s winner to be an American fellow in his eighties who was a deeply nurtured shade of mahogany whilst looking resplendent with 1:1 scale replica of Big Ben on his wrist and a partner who would be forgiven for having alphabetti spaghetti for lunch. Runner up was to my mind a mean-looking Swiss chap in a suit costing more than my house and wearing a watch of suspicious gold origin (circa ‘39-’45). He was accompanied by a young lady adorned in all four seasons of Gucci’s 2019 collection. Add into the mix what is probably knocking on the door of a billion pounds worth of classic cars and enough Champagne to comfortably bob around in a Vanguard-class submarine and you’re basically there. Dive, dive, dive!

Cynicism aside, these events are ​the​ showcase for some of the finest automobiles ever made and on the odd occasion, ​about​ to be made. It sounds like a cliché but it’s effectively a showcase of fine art on wheels. So imagine my delight then when the email dropped in asking if I would like to be part of the panel of judges who on behalf of Bridge of Weir leather would be selecting the brightest and the best for the ‘Bridge of Weir Jaguar trophy’. Brushing aside any thoughts around mistaken identity I gleefully accepted.

After a predominantly legal two-hour drive from the Cotswolds in the obscenely capable Jaguar F-PACE SVR, we rolled into the beautiful surroundings of Hampton Court as the morning sun broke through the clouds and armies of valets fastidiously cleaned the cars. I was feeling rather proud to arrive in the F-PACE, the fact that this car can turn heads amongst some very serious cars indeed, mixed with everyday usability and then smothered in high-end sports-car performance is hugely impressive. After pulling myself away from the bright blue beauty we strode into the main event.

The chaps and chapesses at A. Lange & S​ö​hne, Charles Heidsieck and the Hampton Court Concours had certainly pulled some very special machinery out of the bag and earlier thoughts of poor market appetite vanished. I appreciate that this wasn’t buying or selling however the passion for these cars appears to be still very much present.

After a coffee and croissant, I was introduced to my fellow judges. With the exception of myself it was a who’s who of Classic Car royalty and splendid chaps to boot. I won’t bore you with the details of scoring and criteria because far more interesting were the stories of the owners and the cars combined.

I’ve always believed that classic cars should be used. Stationary they may look beautiful but it’s only fulfilling a small part of its purpose. In broad-brush terms, Malcolm Sayer designed the E-type but I’m sure a thousand others worked on the gearbox, engine, suspension, electronics etc, etc. So by my slightly skewed maths that means that a stationary E-Type is only fulfilling 1/1000t​h​ of its potential which is scandalous. I wasn’t to be disappointed.

I spoke with one chap (with a great tan) who in his first year of owning his XK120 OTS, drove it from his home in London to Genoa in Italy, caught the ferry to Palermo, did a lap of the famous Targa Florio circuit and then drove it home. He said it never missed a beat!

Another gentleman had driven his 1950 XK120 down from Chester the night before in the pouring rain averaging 75-80mph. Someone else regularly used his for track days at Goodwood and the last man I spoke with showed me a picture of his two little boys playing in his XK140 during restoration in the garage on the side of his house. Both his sons are now 35 and married.

As the judging drew to a close, scores were totted up and disagreements arose. It was a majestic exercise in Britishness to watch us all argue so politely over things that individually and collectively we were so passionate about. Any invitations to a spot of ‘Queensbury rules’ were dispelled as we were ushered into a jolly smart lunch to chew over our decision (sorry). The only thing that broke our attention from intense deliberation was the arrival of a wonderfully hirsute HRH Prince Michael of Kent, superb champagne (chapeau Mr Heidseick), and the most wonderfully presented and thought through food. It’s tough, I know.
After much deliberation, the winner of our overall prize was a gentleman who owns probably the most original Jaguar C-Type in existence. It’s drafted into action for everything from the school run to the odd emergency shopping trip. Between this, it is campaigned at the Le Mans Classic and the Monaco Historique Grand Prix. I’ll let you research the value of it but needless to say none of the above is a mean feat.

So perhaps the takeaway from a fabulous day is more about the stories that the cars and their owners create when they’re together as opposed to the ups and downs of the economy. We all have an inexplicable love for these machines and we relish the hardships that they put us through during our adventures together. From the great and glorious in Tesco’s carpark to the positively antique thundering along at night in the rain; it’s all about the experience so balls to ‘the market’.

As the ranks of the independent filmmaker exponentially expand and the funding market for new films grows, the team at Canon are carving out a serious piece of market share for themselves. What better way to kick-start our inaugural tech review than by featuring a giant-killing piece of kit. The influx of DSLR filmmakers has heralded a new wave of creativity flooding into the market. The next generation of cinematographers walks amongst you. The 5D – and whilst this is by no means conclusive – led this charge in my humble opinion. Those of us wanting to produce work without a bank loan or a budget for a RED epic were…