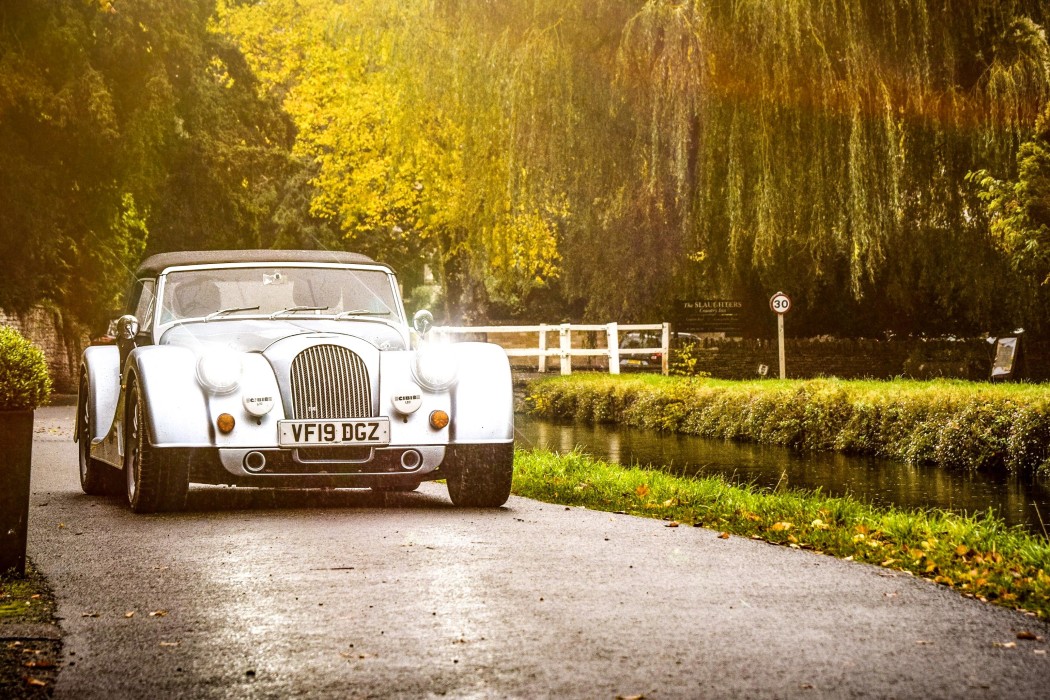 We arrived at the Morgan factory to find the hallowed grounds shrouded in thick Autumnal fog, the modest structures that form the iconic Malvern Wells site appearing from the misty abyss like anchored galleons; conditions that served to amplify the profound sense of mystique that envelopes what is one of the oldest and arguably most illustrious automotive complexes on the planet. Truly a day of Great British weather in which to experience one of Britain’s greatest automotive institutions. One hears about Morgan’s factory, the vivid preconceived mental image often formulated is one of mustachioed, pipe-toking ex-airmen in begrimed period coveralls, laboring over original jigs within traditional workshops, steeped in history and alive to the beat of sawing and metal working. However, nothing quite prepares you for the immensity of the experience in witnessing the grandeur of it all first-hand. It’s a beguiling labyrinth of wonderment; a stark yet seamless amalgamation of time-honoured processes and cutting-edge modern technology; the sense that you are somewhere truly special is ever present and unequivocally palpable. Cars in various stages of completion lay dormant as if in a state of suspended animation, waiting to have life bestowed unto them by Malvern’s crack team of master craftsmen and women. One of the resounding highlights of the factory tour – for me – was Peter Morgan’s office. Perfectly preserved, and frozen in time; it’s a proverbial Tutankhamun’s tomb of historical relics from the marques history. Cracking the door, the powerfully evocative aroma of age hits you instantly. A tapestry of photographs and plaques adorn the walls, and papers lay nonchalantly scattered on a leather top mahogany desk, as though the great man has simply popped out for lunch. It’s an almost overwhelmingly poignant experience, and one that I wholeheartedly recommend to car enthusiasts and history aficionados alike.

For a passionate enthusiast such as myself, Morgan’s Malvern Wells factory, much like Hethel or Lode Lane, holds legendary status. It is truly a place of unparalleled provenance, however we were here on this particular occasion to experience something decidedly contemporary – introducing the Plus Six; the marques first all-new model in 19 years. Really? – I hear you derisively exclaim. Yes, really. Whilst this may look like every other four-wheeled model from the brand’s 110-year history, it is in fact – by anyone’s standards – a thoroughly modern sports car. Underpinned by Morgan’s new state-of-the-art, bonded aluminum ‘CX’ chassis, and powered by BMW’s latest B58 turbocharged inline-six, the Plus 6 heralds a revolutionary new era for the Morgan Motor Company, and this right here, beneath my mortal bum cheeks, is genesis; chassis no. 001. 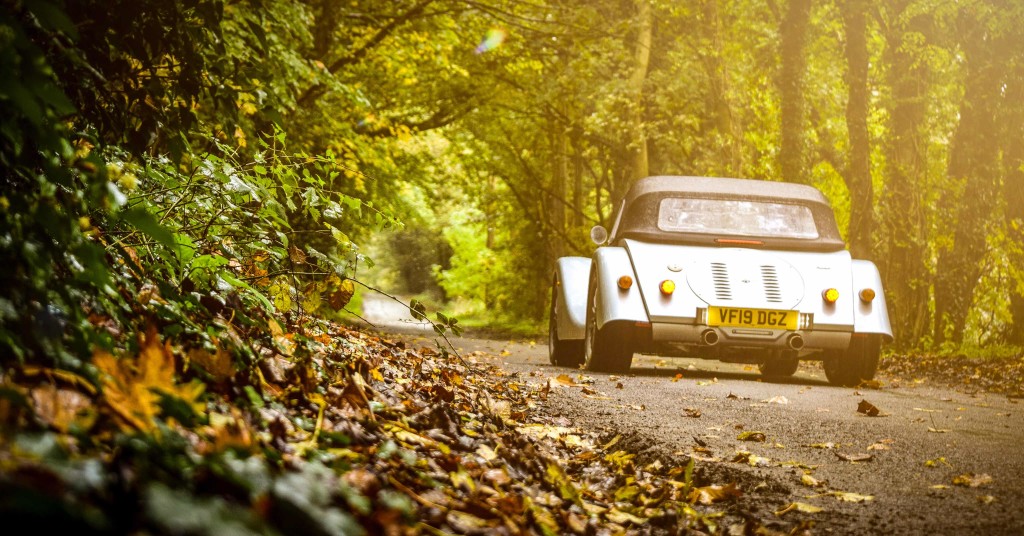 Sadly, contrary to my somewhat overly-romanticised, pre-emptive visualisation of how I’d hoped the day would pan out, the weather transpired to be characteristically uncooperative. Ever the optimist, and determined not to let the drab conditions perter me; I embarked upon the process of tentatively acquainting myself with the Plus Six, the incessant rain and mud-caked roads creating the ideal environment in which to explore the extent of its everyday versatility. Totally unphased by this particularly miserable bout of inclemency, the Plus Six tackled the rutted, potholed tracks that somehow pass as public roads here in rural Gloucestershire, with the comfort and composure of a well-appointed GT car. The cabin space in the Plus Six, unlike some Morgan’s of old, is copious enough to accommodate even the most generously proportioned motorist, and the two-seater configuration allows for ample storage space in the rear, enough for all the luggage one would ever need to sustain a long weekend in the Cotswolds – just remember to pack wellies. The interior aesthetic is a slightly surreal amalgamation of classic Morgan and modern BMW switchgear, which strangely, works. A digital driver information screen has been sympathetically incorporated into the centre of the instrument cluster, and for the more radical technophiles amongst us, there’s even an AUX cable situated in the glove compartment, which is sure to have some die-hard traditionalists choking on their stout.

I believe the Plus Six’s stated power output figure of 335hp has been somewhat conservatively calculated. As has been previously proven with the B58, in both its Supra and Z4 guise, I suspect (having personally driven all three), that the actual figure is, in fact, notably higher. Integrated into a platform that weighs little more than a 1000kg (almost half a ton lighter than it’s B58-engined peers), and with the omission of complicated electronic driver aids, the Plus 6 offers a uniquely exhilarating and unadulterated driving experience that belies its classic appearance. The lack of immediacy that often plagues forced induction drivetrains is a complete non-issue in this instance, due in part to the B58’s innovative twin-scroll turbocharger. There will undoubtedly be those who mourn the loss of the sonorous, baritone V8, but the six-cylinder has a beguiling character all of it’s own. Furthermore, 35MPG is capable with little to no effort, a genuinely impressive feat considering the performance on offer.

The art of successfully modernizing a piece of iconic, classical design is one that has evaded many manufacturers in recent years. The Plus Six is a beautiful and harmonious amalgamation of classic and contemporary, a master class in tasteful modernisation. The unmistakable Morgan silhouette has been subtly yet effectively altered. The Plus Six is wider, and lower; the period-style grill has been extensively redesigned, and the large chrome bumpers have gone in favour of a more contemporary-looking sculpted lower valance. It’s difficult to comprehensively pinpoint the exact elements of it’s architecture that give it it’s decidedly contemporary presence, however, one thing is for sure; the cumulative result of these numerous revisions, is a truly worthy modern evocation of a historic icon. 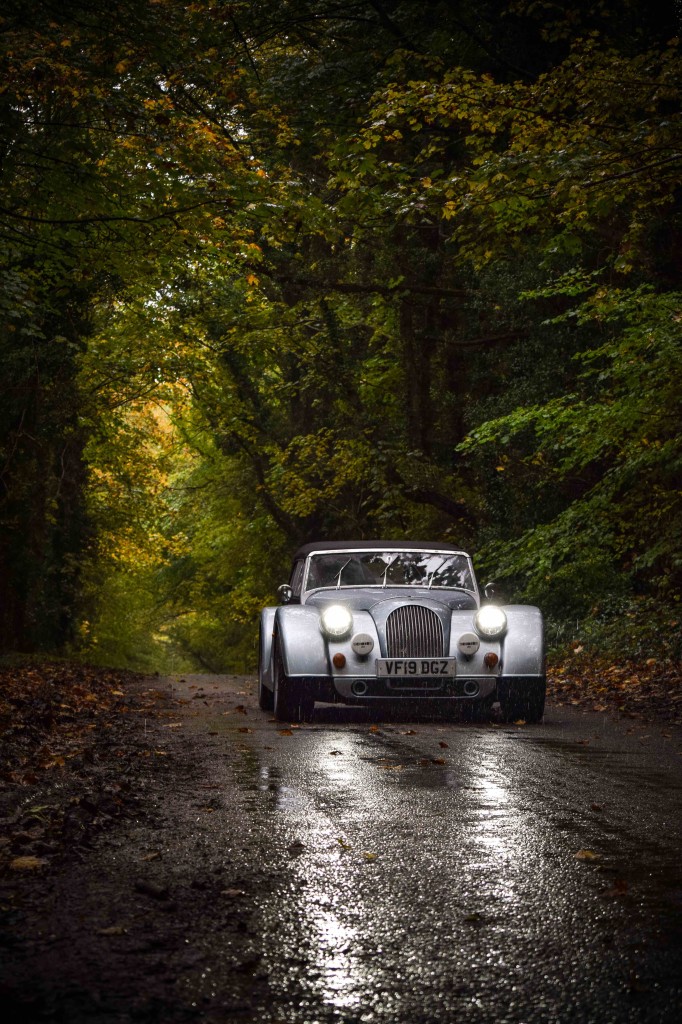 A brief intermission in the rain presented an opportunity to get the roof down, which purists will be pleased to know, is a quintessentially, digit damaging, Morgan-esque experience. The ever-so-slightly dryer conditions were at least conducive to me properly exercising the Plus Six’s performance capabilities, without the risk of fouling my trousers, or the hand-upholstered leather seats. By removing the top, the sense of occasion is heightened tenfold; the evocate bark of the straight-six all-consuming in it’s amplification. 335hp may not sound earth shattering by today’s standards, but the nature of it’s delivery, combined with the lack of mass, makes for a truly potent combination; a potency that manifested itself one evening, to the detriment of a rather unsuspecting Porsche Cayman driver, who was shocked and bemused in equal measure by the Plus Six’s sudden and perceivably uncharacteristic turn of pace up as I accelerated past him on Fish Hill.

There’s something wonderfully contradictory about the Plus 6, on the one hand, it’s the embodiment of British sophistication; dignified, cultured and eternally stylish. However, at the drop of a tweed cap, it’s transformed into a raucous, froth-mouthed lunatic; shouting and spitting like an anti-social youth. It’s a noisy, two-fingered salute to conformity; a bit like turning up to the queen’s garden party wearing nothing but winkle-pickers and a g-string. Slipping the 8-speed ZF transmission from auto to manual, and engaging Sport+; the visceral cacophony of exhaust and induction noise envelopes you as you power up through the ratios, urging you to bury your right foot increasingly deeper into the carpet. Pulling on the steering wheel-mounted paddles, a slight lateral twitch as the Morgan’s bespoke Avons fight to overcome to Plus Six’s colossal torque on the grimy autumnal country roads serves to emphasise the sense of exposure and potential danger surrounding the task in-hand, as you engage in another mad dash to the redline. Forget about variable drift control and the raft of other contemporary electronic driver assists, this is a driver’s car in its most uncorrupted form. The Plus Six wasn’t developed to flatter the egos of pot-bellied bankers, it requires a concerted effort to drive it on, or near, the limit, however, and great rewards await those proficient enough to harness its true capability. There’s an acute sense of connectivity one feels behind the wheel of the Plus Six, a level of engagement that is all-too-often absent in today’s high-tech performance cars. 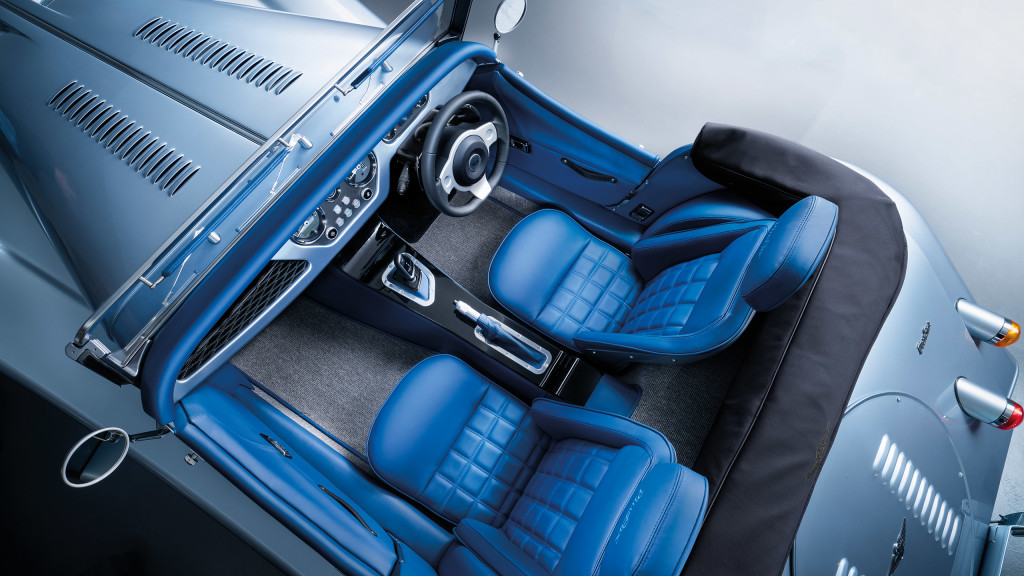 A lighter, stronger, more torsional rigid chassis, in conjunction with a fully-independent, bespoke suspension set-up, and a more optimum weight distribution – due in large part to the lighter six-cylinder engine – ultimately bestows the Plus Six with a far greater degree of composure and dynamic proficiency over the outgoing Plus 8. The initial turn in feels precise and controlled, and the veritable tsunami of torque that serves to propel you out the other side is endlessly grin-inducing. The power steering, whilst electric, is perfectly calibrated, and offers an extremely good level of feedback through the steering wheel. In the dry, the Plus Six handles corners with an accuracy and sure-footed competency to rival any of the current raft of high-performance sports cars – although I would advise exercising a certain degree of caution in the wet.

Within the space of a few short days, I’d become completely besotted with the Plus Six. Even with a modern, turbocharged drivetrain and a multitude of other modern elements, that unquantifiable and unique sense of engagement that only seems to be prevalent with classic cars, is still very much present.

As you eventually come to rest after a spirited drive, the heat haze swelling from the louvered bonnet vents, the blood settling in your veins and your heart rate slowly normalising; you can’t help but feel overcome with an overwhelming profound sense that, although this new Morgan is as contemporary as Netflix or selfie-ing, it’s still very much an event. The Plus Six commands attention in a way no garish supercar ever could. It’s highly revered, by young and old alike. It heralds a dramatic, revolutionary new era for the Morgan Motor Company, however the human element is still very much at the core of everything they do, and the Plus Six is certainly no exception. It is, unequivocally, the perfect antidote to the banality of modern motoring.

Aleksander is an Automotive and Travel eccentric and excessive in the extreme. The very idea of marrying both his adoration for Italian sports cars and engines alike and his pursuit of air miles keeps the entire editorial team on it's toes. Aleksander likes nothing more than to put on his wellies and braces and head out to the Breacons for a spot of climbing in his C63AMG. The question is, how long will it last?

Asia in the Mediterranean

As someone who is passionate about travel and experiencing all the wonders and riches of the world’s eclectic cultures, cuisines, people and landscapes I am rather embarrassed to say, as yet, I have not visited as much of Asia as I wish to. However, my daily life is enriched with many of the cultural influences that have reached our shores from the incredible food, their historical attitudes to natural health and wellbeing ( I practice yoga, tai chi, meditation and use Asia influences practices like acupuncture for health) , to their Feng Shui design influence and the strong religious philosophies which resonate powerfully with me ( I am sure I…