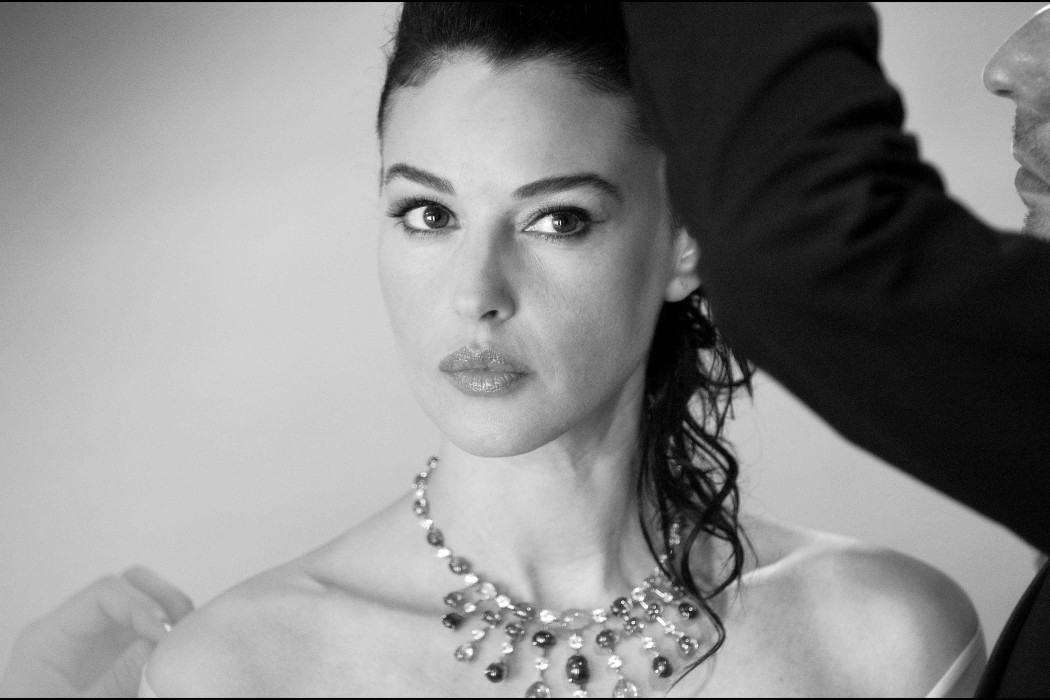 Few women have the title of ‘Siren’, in my opinion. Only a handful make the cut these days. It not only requires an artistic flair that makes them seem both crazy and magnificent in equal parts, but also an otherworldly, almost Elysian quality. If there ever were more than three or four of these empyrean femme fatales, Monica Bellucci would be chairwoman of the board.

As writers, we spend months chasing up interview requests and ultimately pursuing the proverbial white whales. Monica Bellucci is The Review’s first female front cover. And what a cover.

Spanning a career that arguably began in the late-80s, when she signed with Elite Model Management, Bellucci has had an enviable métier. She originally studied law at the University of Perugia. As is often the case, after her career took off, she quit her studies and moved to Milan. She quickly made the switch to treading the boards and her career to date has included such critically-acclaimed films as L’Appartement, alongside Hollywood box office hits, including Bram Stoker’s Dracula and The Matrix Reloaded.

“I’m very lucky I’ve had the chance to work with so many directors,” she admits. “That’s the richness of my work.”

Last year, we interviewed Domenico Dolce and Stefano Gabbana. You encapsulate the brand ethos perfectly. Why do you think that is?

I work and have been friends with Domenico and Stefano for many years. In 1989, they saw me just as a young Italian model. Years have passed, but they still invite me to participate in promotions and be a face of the brand. It is very touching of them. The meaning of beauty there is not necessarily ‘young’. It’s really a faithful Italian story of love and friendship. When we do shoots, it’s not work; it’s having fun with friends creating, beautiful and timeless pictures together. We have the same ideal of beauty, probably because of where we are all from. If I was raised in France and confirmed to their sense of beauty then I might say Brigitte Bardot epitomises beauty but I’m Italian and I grew up with actresses like Sophia Loren, so they’re my continuing ideal of beauty.

Why do you think Italian culture is so closely linked with beauty and, of course, high fashion?

My home of Perugia was a vacuum when it came to style. So I didn’t start to appreciate fashion until I moved away, when I was older. Italian woman have gossamer of femininity that is very strong. All of the world’s big fashion brands have offices in Milan and the women there are hugely into their fashion – although the style is much more reserved, traditional and elegant than Rome.

Your career is impressive. Have there been any serious obstacles to your success over the years?

I think like anyone trying to make it. The hardest part was the beginning. It has taken over 20 years and, in that time, I have started to work in the fashion business, after working in movies. The transition from one to the other demanded patience, strength and awareness.  It’s all about appearance, depth of character, and you must be able to play hard too.

You are considered by many men and women to be a true ‘siren’. Who do you find more complicated, the female or male of the species?

Oh, that’s a really difficult question. I cannot say for certain, I know only one side of the coin, so can only speak as the ‘siren’.  I suppose sometimes this world does not want to see strong women, because by our nature we are considered the ‘weaker’ gender. Whatever the case, I’m glad to be a woman.

Do you think you would have been as successful as male?

I would have used my skills to the best of my ability – siren or red-blooded male.

Speaking of red-blooded men, I remember watching your ex-husband Vincent Cassel in Oceans 13 and muttering the coolest sounding, vitriolic swearing I have ever heard: “Les petits fils de pute”.

He will always be one of the most dashing men I know. Marriage, we never know how long it will last. I never got involved in the choice of his papers nor in mine, we are very independent, we lived in different worlds, his friends were our friends, mine are different.

There is a generally accepted comedic concept in England towards the French and Italians, with regards to mistresses and lovers. Do you think this is a fair stereotype?

Each culture has its own relationship principals. I have friends that adore the attention they receive when they come to Italy and, conversely, Italian friends that think all the men in London are gay because of the lack of attention. In Italy, we flirt and we charm all the time, it is nothing more than a look, or a gesture, but then nothing happens afterwards. So no, I don’t think we have a predisposition towards infidelity, but merely have a penchant for amorous behaviour.

So, that said, what does being Italiano mean to you personally?

I have a strong sense of self and national pride. I travel around the globe but I am still Italian at heart. I think that I embody the place I come from. Family, friends, food, these things are all intricate to our culture, I seem to keep my family traditions going like breathing – it is part of who I am.

What are you working on at the moment?

I have been working for a while with the Serbian filmmaker, Emir Kusturica. It’s a project called Love and War and it’s dedicated to a man who survived war and became a monk. It is my first time in Serbia and I have never been to such a magical, mysterious place. The scenery is breathtaking. What spirit! I’ve actually been living at the home of Emir Kusturica. I’m considering learning Serbian as well.

Is it a culture shock working in Europe as opposed to the big studios in the US?

America is the land that gave birth to the modern studio system. In Italy, we have cinema, talented directors and producers, but not in the same way as America. To get a project off the ground, you need money. We don’t have enough money in the arts, films, ballet, opera, these things all need investment. Obviously, I left Italy to pursue a global career and I am pleased that I did, otherwise I would not have known this success, but Italy will always be my first love.

I arrived in the Cotswolds late one evening, to collect The Review’s motoring editor, Oliver Smith. I had driven out to catch the sun set across the fields, as I wafted along to the sounds of Romance by John Barry. For a moment, I experienced a sense of stillness behind the wheel of Audi’s 4.0 litre, 597bhp weapon. This was quickly dispelled by the quad exhaust delivering a guttural raw the likes of which can only be conveyed in a Jerry Bruckheimer film. I arrived in good time, of course, able to observe the usual pleasantries of drinking coffee, whilst lapping the stationary vehicle and muttering first impressions to ourselves….