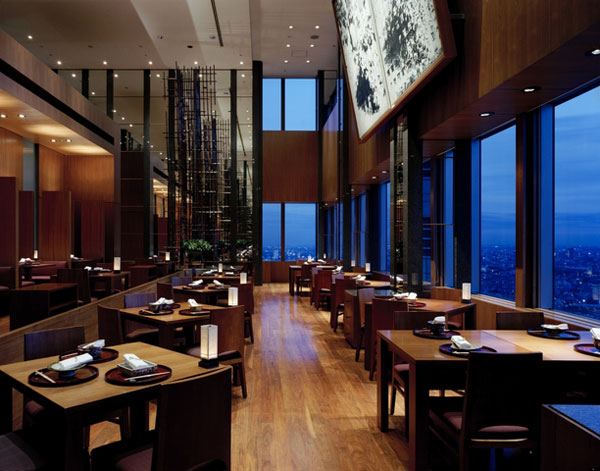 My knowledge of Japanese cuisine was only a smidgen above zero when I touched down in Tokyo. Despite the popularity of machine-rolled sushi flogged in supermarkets and the flurry of ramen houses that have popped up in recent years, the mass market (me included) is only familiar with a narrow cross section of Japanese cuisine in the UK.

With this in mind, I tried to widen my horizons and see what the heck else I could trough during my time there. On my first night in the capital I washed barbecued beef, onions and bean sprouts down with Asahi. That was at a street stall with a squatter toilet a few paces further up the alley. Keen to bite into a banquet at the other end of the spectrum, Night Two was dinner at Park Hyatt’s Japanese restaurant, Kozue.

Kozue is impossibly stylish. The ceilings are high making it seem airy and sophisticated. Speaking only as someone with a pair of functioning eyes and not as an architect, it would have been easy to have split this space into two floors, two separate restaurants and garner twice the profit from punters. But they didn’t. Consequently the place oozes class. The furniture is simple and the décor is minimalist though when you’re 40 storeys above Tokyo’s buzzing entertainment and business district, Shinjuku, throwing money at fancy interiors would undoubtedly be pointless. Wisely, Park Hyatt seem to have invested their money on gigantic windows to aid their clientele look down, down, down to the neon playground below.

It is with keen curiosity and an open mind that I sit on the chair that’s being pulled out for me. Wine menu in hand, I flick passed the Californian reds and study the Japanese wines. I’m not talking sake rice wine here, I’m thinking about the familiar, alcoholic grape juice variety. The Yamanashi prefecture which borders the Tokyo district is nicknamed the ‘Kingdom of Fruit’ and its harvest is responsible for around 40% of domestic wine. I try a glass of a very agreeable ARUGA Retiro Catavento, a merlot, cabernet sauvignon, peti verdot blend from here.

Lights from skyscrapers dance below us and as the gentle and smiling staff waltz away with our order, we’re left hoping against hope that the food can pleasure our taste buds as much as these views are satisfying our eyeballs.

Kozue offer kaiseki cuisine which is a multi-course haute cuisine take on traditional Japanese meals. A kaiseki menu usually includes an appetizer, a sashimi course, a simmered dish followed by a grilled dish and then a steamed course.

The appetiser arrives in a deep box tray. There are mouthfuls including a single piece of sushi and seared duck breast inside. These morsels work to set the tone for what’s to come and the Autumn influence is glaringly obvious in the chunks of roasted chestnuts which are dense, sweet and purple in colour. The presentation is very deliberate – each and every decorative maple leaf is placed with precision. And love.

That’s down to Head Chef Kenichiro Ooe who has been with Kozue since its launch in 1994. Here are two really awesome things about him: first, he has a special license from the government meaning he’s allowed to serve the potentially deadly Fugu pufferfish; second, his commitment to his work extends beyond the food he serves right to the recepticle he will present it on. So much so that over the years he has selected thousands of unique pieces of crokery himself.

Next is the sashimi. A king prawn, a helping of tuna and a couple of squid bites are rolled out in a silver bucket of crushed ice. While the tuna is devine, I wonder if wedging the prawn in the ice means that it loses a little of its flavour. I’m new to raw squid but my lipsmacking lust for calamari is huge so I fly in there, chopsticks like pincers. It is so far from calamari. It is creamy and not especially chewy. This is disappointing on a personal level though nothing wasabi and soy sauce can’t sort out.

For my ‘main course’ equivalent I opt for the shabu shabu –  beautifully marbelled sheets of Japanese sirloin that are to be dunked in a pot of broth that sits on a posh camping stove on your table. Along with seasonal veg like mushrooms and Chinese cabbage, you fish it out before seasoning with pepper, seasame and soy sauce.

The crescendo of my particular meal was the beef but the menu is very fish-heavy. If you’re not a lover of stuff that comes out of the ocean, lakes and rivers, Kozue might not be your ideal munching venue. Thankfully, the 52nd floor of Park Hyatt is home to the New York Grill where you might feel a little more catered for.

If fish is your thing, Kozue will be your wet dream. There are things on this menu so unusual (for a westerner) it’ll send fish lovers into a salivating stupor. There’s everything from snow crab to sea urchin to SIX varieties of blowfish delicacies. What’s more is that each and every dish that leaves Chef Kenichiro Ooe’s kitchen on his personally chosen platter, is a work of art that demands respect and admiration.

Jeep has showcased its legendary 4×4 driving credentials by becoming the world’s first automotive manufacturer to drive a car up and down an Olympic-standard white water rafting course. Jeep and Red Bull ambassador Aimee Fuller guided the Jeep Renegade Trailhawk on the thrilling challenge at Cardiff’s International White Water Centre. The Renegade and Olympic snowboarder Aimee tackled extreme off-road conditions as they went up and down the 250 metre long course, battling a flow of water that exceeded four tonnes per second and a descent of more than 30 feet from top to bottom. “I’d never done anything like this before so when I arrived and saw the power and…