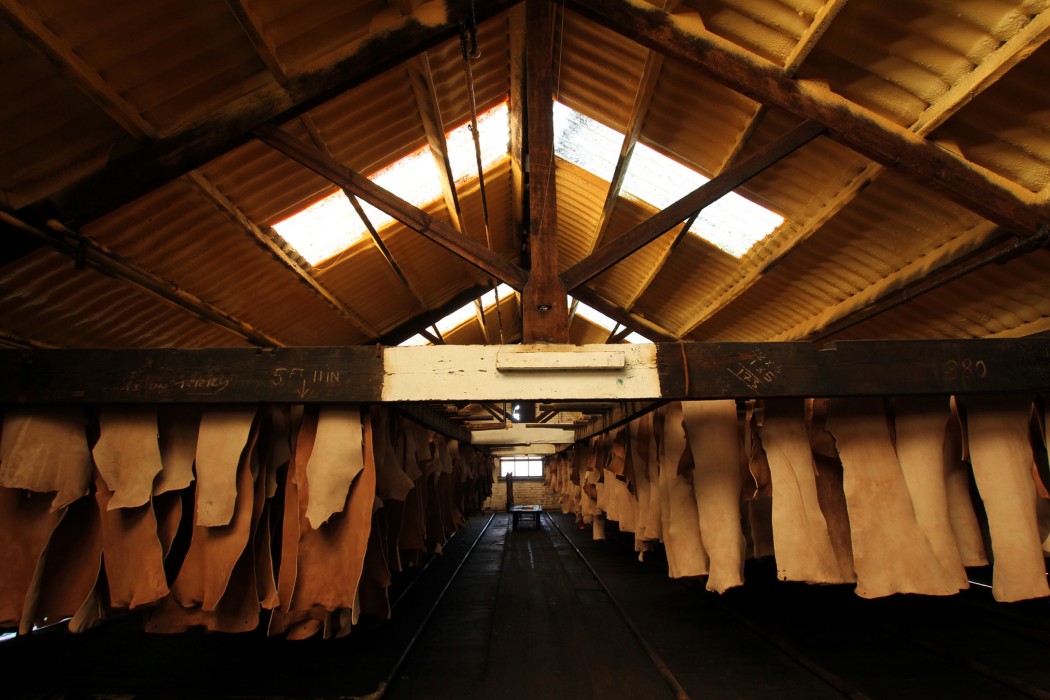 There are constants in life. Some of which are present to such an extent that they become overlooked – taken for granted if you like – and therefore, their importance dismissed. The presence of leather in luxury goods is an example of this. Leather is deeply rooted in the luxury market, and rightly so. Although, historically, leather production has become industrialised and readily available to the working man, there’s a world of difference between a finely-tanned hide crafted from Hereford beef stock and those being mass-produced for the commercial market coming out of the Far East and India. Chalk and cheese.

I spent a couple of days in September wandering the numerous venues hosting London Design Week. Gorging on the feast of outstanding quality that British design has to offer, one thing that I noted was the vogue for raw-base organic materials used this year. Paper sculptures meticulously folded, cascading from walls as if origami has taken root. Dried and preserved mosses intricately laser cut and layered as soundproof wall claddings. Non-ferrous metals such as copper and brass patinated and polished to bring out both their raw states and their honed, gleaming range. Domestic timbers, such as oak, ash and chestnut, were present but finished in almost-unperceivable lacquers that gave the effect of wood in its raw form. At its most natural state, wood is beyond comparison as an organic material. Leather was, as ever prevalent at the show, natural, organic and tactile. It has grain, fibre and, above all, substance.

I got thinking about the diversity of leather and how it’s used to give gravitas to objects of desire. I needed to know more.

Leather in its various guises comes into our daily lives in so many ways. In the fashions that we attire ourselves in, from the very soles of our shoes to the coat on our back. Would James Dean have looked so ruggedly handsome in a tweed sports jacket? Our interiors are adorned with it. If you have ever seen a leather-tiled floor, you’ll agree that it’s a sight to behold. Our furnishings are resplendent in it. What’s a club chair without a beautifully-grained, rich leather upholstery that creaks delicately as you relax into it?

Not so long ago, I was commissioned to design and make a desk for the Cube Gallery. The brief was that it should be of mid-century style, but with an air of refinement. For me, it had to be of oak with a leather-bound top, fulfilling the brief exactly. When did you last see a luxury car that wasn’t upholstered in the finest of hides? The smell and feel of the interior of a Rolls Royce is in no small part down to the quality of the leather used. It seduces before you’ve shut the door.

My curiosity piqued. I contacted Thomas Ware & Sons, a tannery based in Bristol, England. One of a handful of traditional Tanners that are still operating today, they have been based on the same site since 1840, and are producers of some of the finest hides available on the market.

Technical sales director Barry Knight was kind enough to give me an afternoon of his time. I’d struck gold. I would’ve been hard pressed to find a man more qualified to guide me through the history, processes and applications of leather. As president of the UK Leather Federation, Barry knows a thing or two about leather. His knowledge and expertise are immeasurable. He talked me through some of the history of the business and what a vital role it played in industry.

He spoke of The Worshipful Company of Leather Sellers, an industry guild that dates back to the 1400s and is still in existence today, albeit in more of a bursary and educational role. This guild split the various disciplines involved in leather production into individual roles. A barker, for example, would take bark from felled trees for use in the tanning process. A skinner would carefully strip the skin from a slaughtered beast, ensuring that it wasn’t stretched or punctured. Any skinners or barkers in your contact book?

It was big business back in the day. The Guild did this to bring some organisation to the business and to ensure that each element was undertaken by someone proficient in their craft. These guide lines stayed in place until the 1850s, when they were relaxed in order to enable British tanners to compete in the European market, which was turning out leathers far quicker than we were.

I had no idea what an important role leather had played in the Industrial Revolution. Literally turning the wheels of industry, by means of leather belts running from the drive shafts of steam engines. Or how much leather was involved in the railway network that was growing across the country in the mid-1800s. The carriages used vast quantities of leather in the upholstery; what other material would have been hard-wearing enough to take the daily flow of people up and down the country?

Thomas Ware & Sons use processes today that are as old as the loin cloth. Time proven, you may say. Alongside and complementing their historical techniques, they adapt and develop new methods to provide their clients with a product that is unsurpassable in its quality.

It’s no quick trick turning a skin into a high quality hide. General saddle leather takes four to five months to turn into a stable usable material – and that’s just a baseline product. Further adaptations are required to tailor the hides for use in specific markets, such as Northampton’s bespoke shoe industry. More specialist processes take up to two years. These are not commodity hides. These are a nurtured, crafted, bespoke product, revered by those in the know. A product engineered to the exact requirements of its use – the suppleness, colouration, tensile strength, thermal stability, thickness and aesthetic characteristics all tailored to the highest standard and needs of the individual client.

To reach these exacting standards, Thomas Ware procure the best possible tanning ingredients, all of which come from sustainable sources. Another aspect of their ethos.

The responsibilities that Thomas Ware takes on board not only ensure that every ecological aspect is examined, but also that every byproduct of the tanning process is fed back into industry. Lanolin has numerous uses: collagen and elastogen are used by the pharmaceutical and surgical markets, denatured hair is used in fertilisers, and proteins derived from the skins go into the food industry. The diversity is astonishing. It’s hard to think of any other natural product that can be manipulated to such a broad range of markets and applications.

The bespoke footwear market reaches out to Thomas Ware for the supple, yet hard-wearing leathers they require. The equestrian market requires thick leathers, robust enough to withstand the rigours of horse riding, yet appearing to be the epitome of luxury, holding such deep rich tones in their colouration. A cricket ball bowled at any international match would most likely have had the leather sourced from Thomas Ware. Barry showed me a beautiful, but slightly damaged leather floor tile that had been lifted from a New York apartment. Their brief was to reproduce the fine detail of cut and embossing and match the colour and characteristics impeccably. It’s testament to the skill and knowledge at Ware’s that international clients entrust them with such meticulous work.

Barry’s passion and enthusiasm for his craft is infectious. As he stops to briefly chat with employees about the various processes they are involved in, you can see it’s a passion shared throughout the company. This is all-too-evident in the finished hides; they are simply beautiful. As time has proven age old crafts such as tanning are vital to bespoke design.

Clarke is an accomplished bespoke furniture designer and maker. At the helm of True Bespoke, Clarke is creative director and ensures that only the finest furnishings leave their workshop in Bristol. Having spent the last 20 years fitting out desirable residencies from the South of France to Moscow, Clarke has the right stuff.

Some years ago, when I was seeking my fortune as a publisher, I stumbled across a property in a leafy part of Paddington. Yes, they exist. It was an altogether minimal affair: the entire ground floor of the interconnected, listed townhouses had been flattened to create a Zen-like reception area, complete with people raking sand. When I returned on business, not too long ago, it appeared the owners had decided the property was worth more residentially than commercially, and turned the whole place on its head. Luckily this isn’t the sort of thing that happens at The Arch London, one of the few bastions of what I would call a…