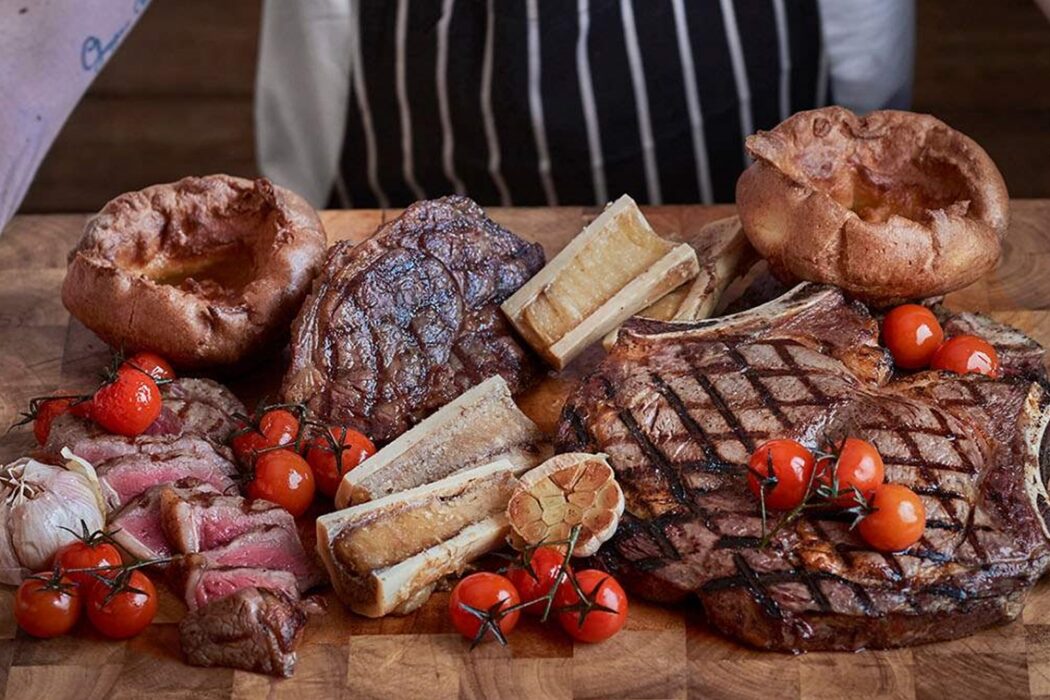 It’s a paradox that, during a recession, high-end restaurants thrive and less expensive restaurants fail. And, in moments of hardship, there’s one plate of food that out-eats any other. Steak is a sign of the times – very us, very double-dip. It’s the most a man can get for his money without feeling shafted by the system. Hard times should theoretically be punctuated by frugality and abstinence – soup, vegetables, grain and off-cuts. Yet, in practice, there’s nothing better than chowing down on the perfectly-pink pomposity of a steak. It’s adversity with bone marrow and mustard.

Gillray’s, the new offering at London’s Marriot County Hall, epitomises everything about recessional appetite and aesthetic. The room is vast, high-ceilinged, with an air of ceremony and grandeur. It even evokes Depression-era decor, as does the bar, with its cute focus on gin-and-something aperitifs. But, however pleasant the surroundings, does London really need another steakhouse?

There’s a fundamental problem with steakhouses: they all charge the same prices. This wouldn’t be an issue if their quality was consistent, but we’ve all had steaks that are a cross between Leatherface’s mask and a biopsy tray. You’d probably consider it face-slappingly condescending if I explained the mechanics behind cooking the perfect piece of beef, yet so many chefs get it wrong. There’s the obvious advice to cook it quickly and let it rest, but so much more lies in the seasoning of flesh and the rendering of fat. It’s a waste of time hanging and ageing a bit of meat only to murder it a second time. Have some respect: if you’re going to cook a cow, do it properly.

I was dining with my brother, Justin, who is the actual critic in the family – not professional, but a better one than I will ever be. He kept asking what I was going to write in my review. He never reads anything I write, so I told him how I usually just waffle, a kind of circumstantial speech, without much substance and even less guile. His decision-making plays like a lesson in neuroscience. He deliberated and backtracked over which starter to order – the prawn cocktail or the corned beef and bacon hash – until we agreed to share three dishes, including my choice of scallops with smoked bacon and pea mash. The scallops were okay, not memorable, lacking cohesion and bite, and the prawn cocktail, as Justin opined, was ‘just a prawn cocktail’. The corned beef and bacon hash, however, was everything a good dish should be: more than the sum of its parts. The taste was bold, the texture light yet assertive, all bound together with the unctuous yolk of a fried quail’s egg. One of the best starters I’ve tried this year.

In the spirit of assessing a restaurant, it probably seems selfish that we both ordered steak. Selfish, but not regretful – this is a steakhouse, after all. He went fillet, I went rib-eye. Everyone knows what a good quality, well-executed steak tastes like, so it’s pointless me insulting you. A menu may have ten different steaks to choose from, but you only ever get served one of two: a good steak or a bad steak. The steaks at Gillray’s are unimpeachable, to the point of showing off. The produce is well-sourced, the cooking is even, and the fat melts on the tongue like butter on a hotplate. Bovine brilliance. Steaks are served with a selection of mustards, ranging from genial to sinus-burning – a seriously deft touch.

As a rule of thumb, side dishes for steaks are generally pitiful creatures, like sick patients in the gastronomic waiting room, treated with sympathy rather than ceremony. Gillray’s offers sides that people actually care about: black pudding, bone marrow, carpetbag oysters, crab oscar, alongside mushrooms, creamed spinach and triple-cooked chips. This is eating at its best: solid plates of food, without the pretence, without the pokey portions and without the superfluous decoration, delivering exactly what you came in for.

The dessert menu posed yet another quandary for my brother: apple pie or sticky toffee pudding. He settled for the latter, on the basis it came with custard, not ice cream. The staff, who were charming and effusive enough, accommodated without any fuss. He initially described it as the best sticky toffee pudding he’d ever had – but then, in a moment of realisation, no doubt triggered by the fear of being published, abruptly retracted the comment. You’re welcome, bro.

My lemon meringue pie was served chilled, not hot, the way it should be. Its Madonna-bra peaks were firm, crunchy and sticky. The base was thin and undemanding, with an overzealous filling of zesty curd – a well-judged finish, an exclamation point, to a well-judged service.

It doesn’t take a closing paragraph to summarise Gillray’s. In fact, the older sibling did it in one succinct sentence: ‘For a steakhouse, it delivers’. And he’s right. Gillray’s proves that steakhouses don’t need reinvention or quirks, just the knowledge and ability to do what they advertise, because nothing is harder to swallow than a botched bit of beef – except the bill, of course.

A Night of Unreality

Laith Al-Kaisy on the search for salvation. Reviewing high-end hotels is a curse, a pox of the profession. I don’t know how I will ever stay in a crap hotel again. In fact, if it comes to it, you’ll probably find me hanging from one of the fixtures or overdosed in the bathtub with a note reading ‘They only had prosecco’. I recently stayed at a four-star in Bristol, which really has no business marketing itself as such. The easy assumption to make is that promises were made, money was passed, and trousers were dropped—a bit like the average customer’s stay. It was awful. A couple of weeks later, I…