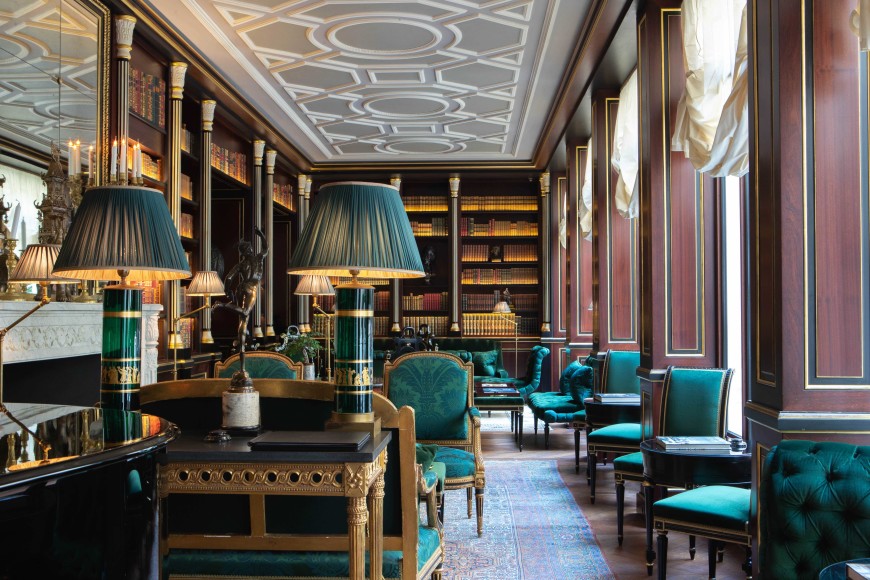 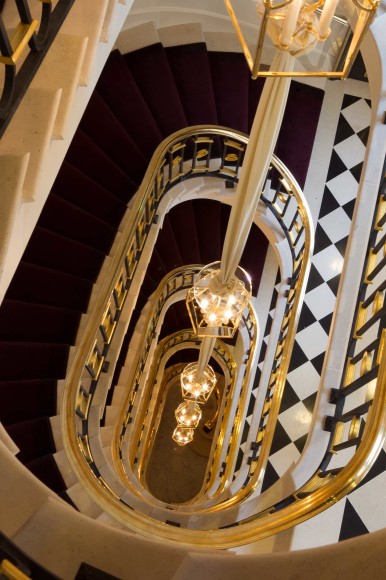 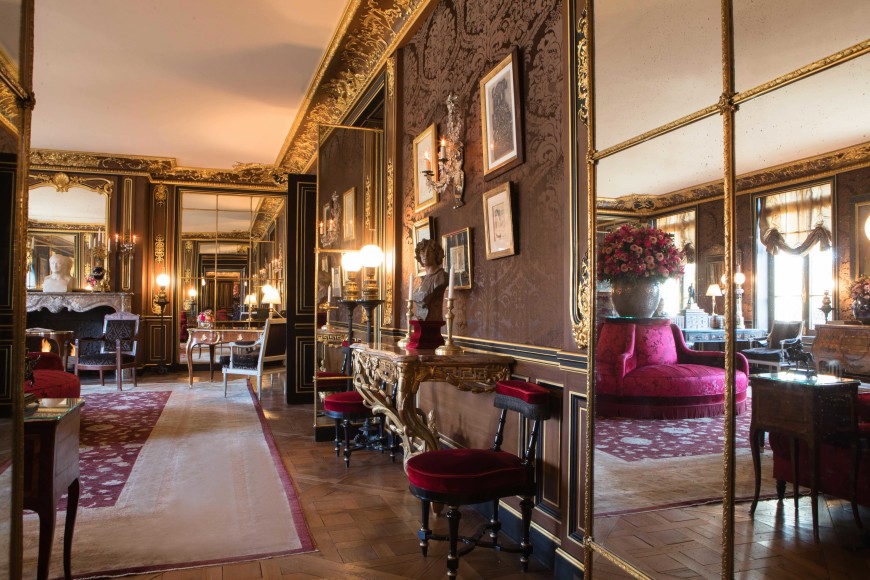 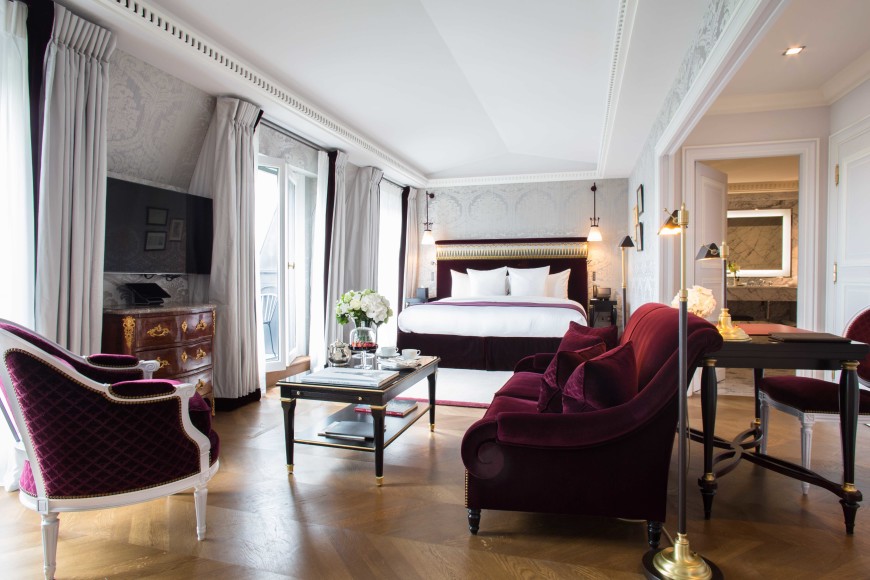 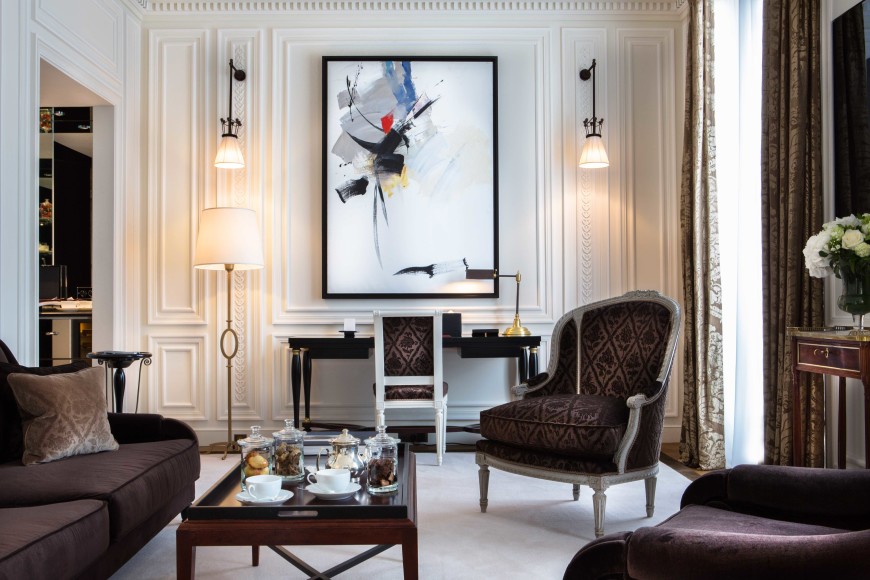 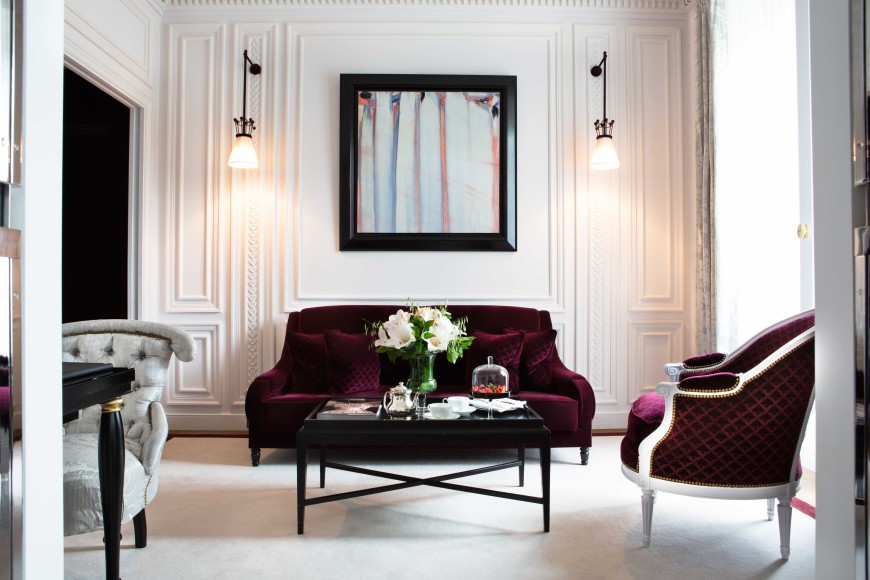 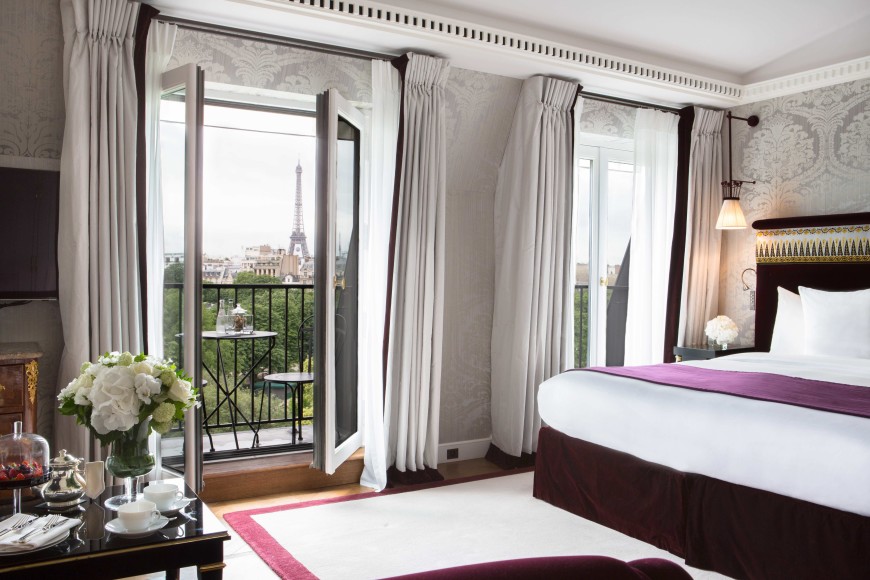 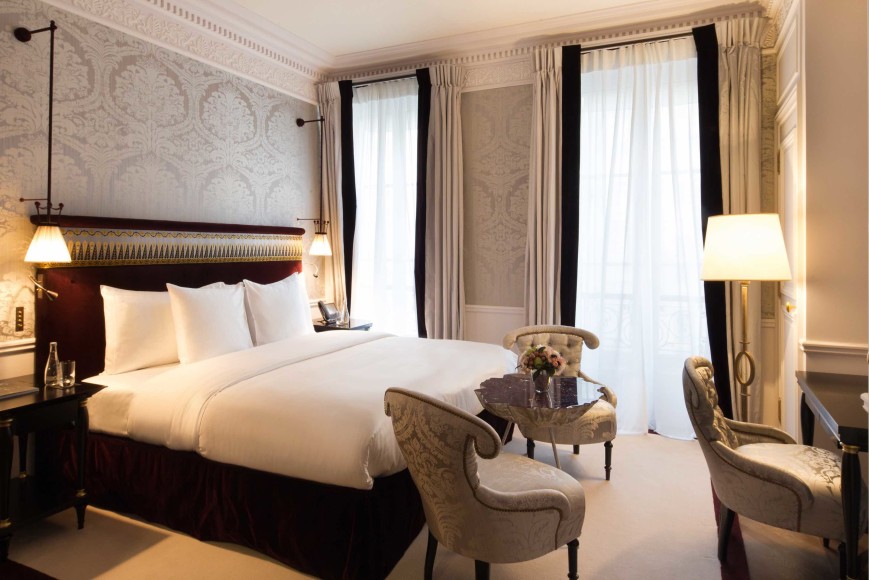 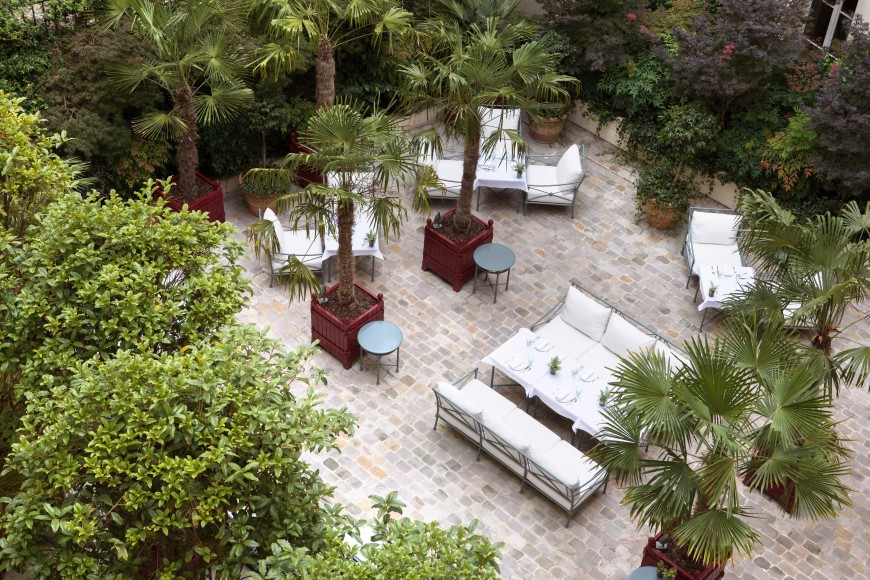 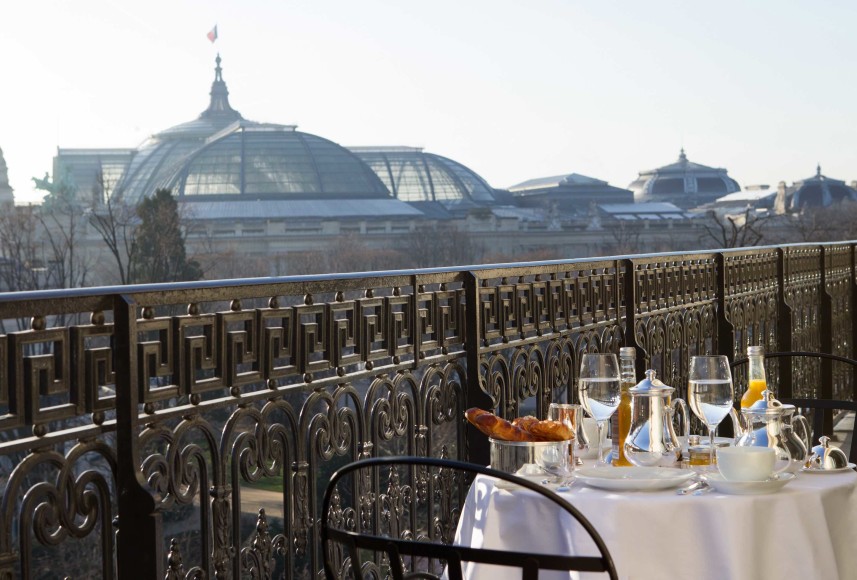 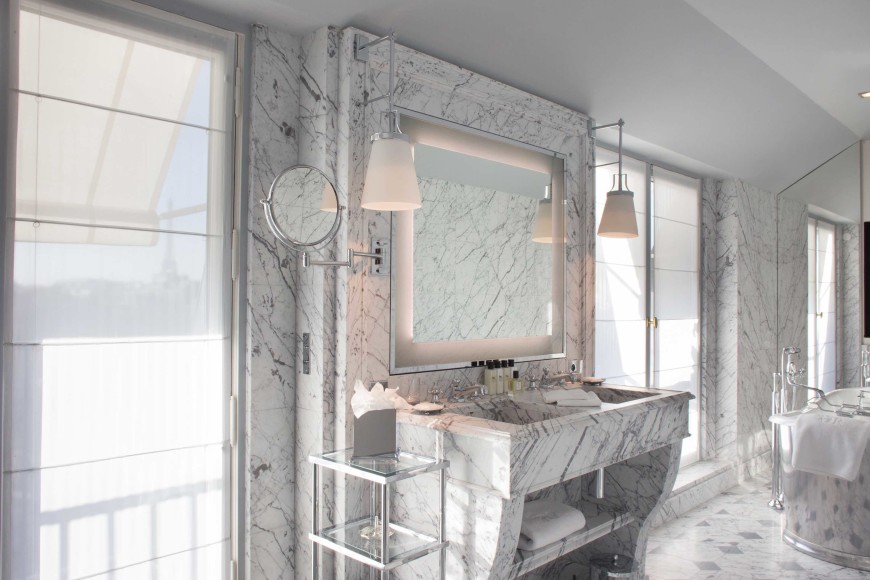 If, like me, you’re closed-minded when visiting a city, you want the quintessential, stereotypical experience that goes with it: haggling in a Marrakech souk, drinking espresso on a crisp Autumn morning in Rome, or perhaps a car bomb in Tel Aviv.
So, when a trip to Paris is on the cards, I want to crank up the French-ness so far that the tables outside of the cafes shake and the mirrored walls in the bistros begin to distort. Let’s think Serge Gainsbourg, really strong fags, small glasses of red wine, black rollnecks, and cars made of corrugated tin. Need I say more.
With my stay booked at La Reserve, I was not to be disappointed. Arriving on a sunny Friday afternoon, there was a bustle around the Elysee Palace with armed policed and dark blue Citroens wafting through the streets in a spirited fashion. It was hot as hell, and as I popped open the door on the Ferrari 488GTB (honestly, what did you expect?) the humid city air hit me like a duvet.

The top-hatted doorman swooped on the car and had the majority of bags removed before I’d even alighted. I said ‘hello’ to one of them, to be amiable (although with bag lifting skills that quick, I did just want to rule out the fact that they were from the West Midlands), and was escorted towards the grand red doors.

Located on the Avenue Gabriel, a mere stone’s throw from the Champs Elysee, the location is perfect. A short walk from the hotel is the famous Rue du Faubourg, home of Chanel, Dior, Hermes, among others. The last name of which named their most famous handbag after Serge Gainsbourg’s long-time muse Jane Birkin. Delicious.

In the foyer, I’m led through to a lounge, which is so sumptuously decorated that you could be forgiven for thinking that the revolution didn’t happen at all. Once seated, the abundantly helpful Nicolas makes me suitably comfortable and ticks the small-talk box with compliments on the Italian car and polite enquiries as to the quality of my journey. After a little while, Nicolas and I begin to understand each other, and this is punctuated when the expression on his face changes from general-public smile to a look of amused mischief, as though he’s recognised a kindred spirit – heaven forbid.

Looking me straight in the eye he says “Monsieur Smith, I want you to understand that here at La Reserve, the only rules that we have are the check-in and check-out times. Other than that, I would be personally offended if you do not treat this as your home”. I like Nicolas; we’ll get along.
After being shown to my room, I throw my case on the bed and have a little nose about. The bathroom is a marble tour de force, which has a square footage larger than most UK homes, and the cool cream carpet feels wonderful under bare feet. I meander across the living room and open the balcony door to be confronted by distant sirens, heat and the noise of mopeds whizzing about their hurried daily business. Getting comfortable, I pour a glass of champagne, light a cigarette, and sit back to muse on the day’s occurrences. As the clock strikes 5pm, I slide into bed for a quick nap before my dinner reservation at Pagode de Cos.

The TV that rises from the end of the bed at 7pm gently wakes me, and I clamber into the shower for ablutions before popping on a clean shirt and heading down for a pre-dinner cocktail. My date for dinner meets me in the foyer and we are shown through to the restaurant. Pagode de Cos is billed as the more informal restaurant of the two available at La Reserve – informal in the way that Kensington Palace is more informal than Buck House.

We take our seats in the almost-empty restaurant and just settle into conversation when a hurried exchange of words between one of the waiting staff and the immaculate maître d catches my eye in the far corner of the room. Seconds later the maître d is standing at our table looking apologetically at my date. “Mademoiselle, I’m am so sorry, but we cannot accommodate you here for dinner this evening. I have taken the liberty of securing you a table in our deux Michelin-starred restaurant, as you are far too beautiful not to be seen”. Smooth bastard.

With that, we move into Restaurant Le Gabriel and get instantly blown away. If you have a shred of epicureanism or even hedonism in you, I urge you to do whatever it takes, including organ sales, to come and dine here. I’ve been lucky enough to see some sights in my life, but this place has them all pegged bar none.

The maître d introduces our waiter for the evening, along with our American sommelier (a less educated me would have thought that funny and ironic). We are gently steered toward a seven-course taster menu with a wine flight that is almost beyond description. I’m not ashamed to admit that my date and I felt a little intimidated by this place, but we were quickly put at ease by the playful and quick-witted maître d and his team. Seven courses and multiple glasses of wine later, and the day was beginning to catch up with me. My eyes felt fizzy and my head felt dull. I was satiated and content, yet at the same time slightly melancholic that this experience had to end.

That’s the thing about La Reserve: it isn’t just a bed for the night. It’s an experience, and a truly special one at that.

After dinner, we move into the cool night air to take an armagnac on the terrace. The freshness is a good wake up and by 11.30pm talk turns towards the light show that occurs at midnight on the Eiffel Tower. Feeling a little romantic (Paris does that to you), I strode in to see the concierge and ask for a 15-minute spell in a suite on the top floor, so that I can see the lights from the comfort of my Armagnac-induced haze. I was asked where I was seated and told that she would bring a key out to me before midnight. Sitting back in my chair, feeling more than a little pleased with myself, I was shortly followed by the concierge who slipped a small leather wallet across the table and said to me “Monsieur Smith, for your special moment”.

With a raised eyebrow, my date looked at me as if to say ‘If you really loved me, you wouldn’t want to make me unhappy with marriage’. I smirked and led her to the lift. Emerging on the fifth floor, we went into the suite and headed over to the balcony. Opening the door, we were confronted by a clear view of the Tower, and the Ferrari parked in the street below (it didn’t have the axle lift option, so they couldn’t get it into the car park).

At midnight Paris fell silent, punctuated only by the visual crackle of the lights on the tower. The traffic seemed to slow down and my perception of time with it, whilst we took in this moment. Just five minutes later, it was all over and we went off to bed, stomachs full and hearts overflowing.

At check out the following morning, Nicolas enquired after our stay. I couldn’t find the words, so instead gave him a knowing nod of appreciation with downturned mouth. He understood.

No one should miss and experience like La Reserve.

With his distinct cockney accent and rough-around-the-edges charm, Michael Caine gained stardom in the 1960s as the working-class antithesis to the typical upper-class English hero. The Review met with Caine to discuss his successful—yet seesawed—career. How did you get into acting? My father thought acting was for sissies – but he didn’t actively discourage me from doing it. He died soon after I became an actor. But my mother always encouraged me to do whatever I wanted, she was really great. Growing up, how involved were you with the South London gangsters?  I knew a lot of gangsters in London very well. That’s why, when I made Get Carter, I…