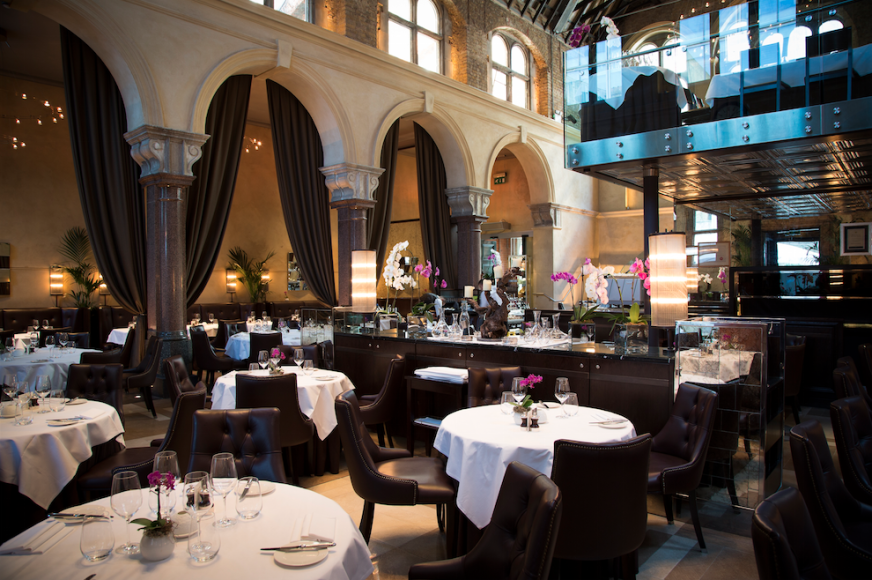 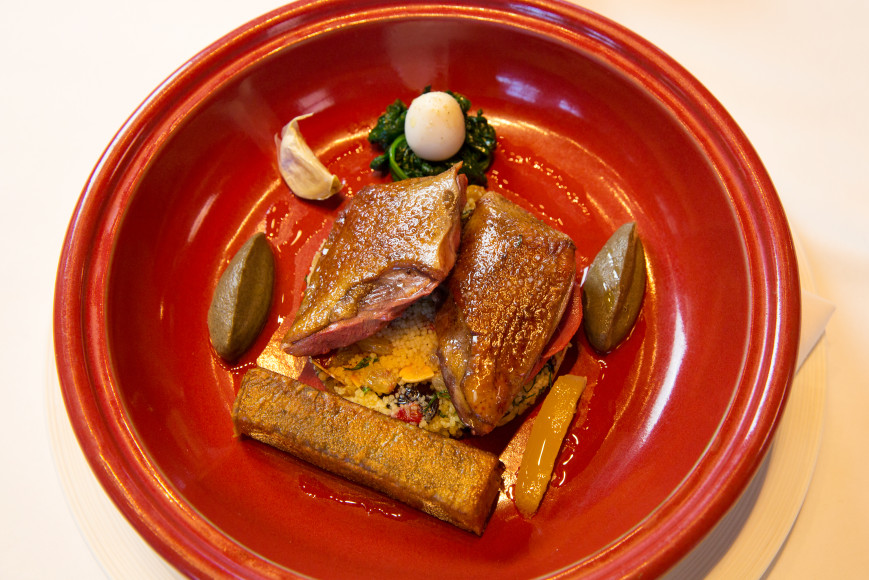 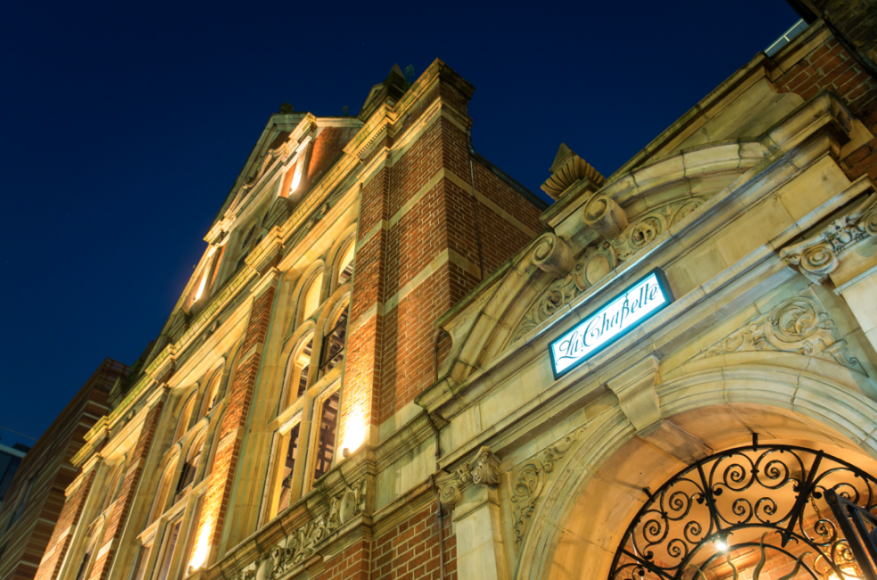 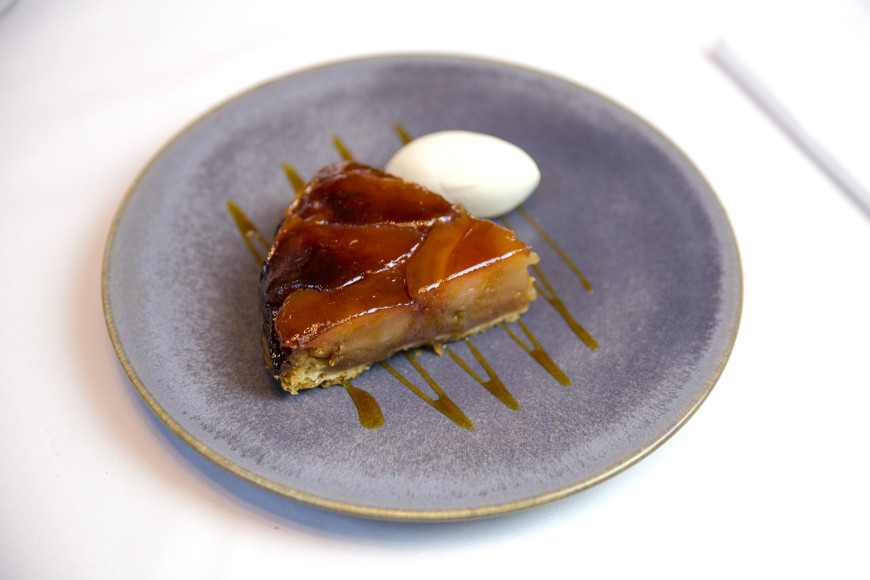 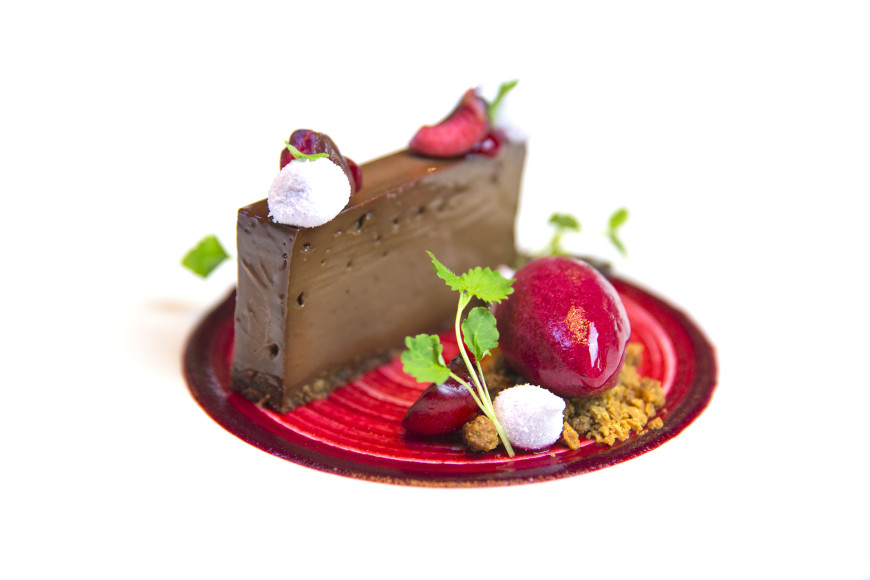 My visit to Galvin La Chapelle coincided with the first proper rainy day of the summer. My partner and I rejoiced at how wonderful it was—how we would soon see the restoration of the green and pleasant land of England—and celebrated by spending the day in bed watching the extended The Return of the King, whilst said partner, a historical architecture fanatic, remarked on the relative merits of fortifications and roof structures.

It was rather fitting therefore, that upon leaving our hobbit hole we were dining in the Grade II listed St. Botolph’s Hall, now Galvin La Chapelle. Constructed in 1890, the building is late-Victorian architecture at its reminiscent best; an exterior of Flemish Renaissance revival with a Grecian-style interior of pillars, pediments, and a ceiling high enough to have a chat with Zeus. The restoration to this hall—once moments from demolition—is enough to warrant a visit but… what about the food?

Rather than describing the food as others have done as unorthodox French, my only advice is to not take the menu too literally. Bear this in mind when you order a keystone of the Galvin gastro-empire: the lasagne of Dorset crab. The French have always celebrated—and rightly so—ingredients that melt and, with this lasagne, the Galvin brothers utilise the melting quality of thin sheets of lasagne with the softness of a crab  mousse and supported by a glorious beurre Nantais on the plate. It was delicate despite the collaboration of butter, cream and pasta that often warns of health issues to come.

The wine, a beautifully coloured, creamy Bourgogne Blanc ‘Les Sétilles, was chosen by their wise head sommelier. Wise, not only because of his discerning palate, but because his expertise was not merely about showcasing the outrageously expensive. The outrageously expensive option however, is available and, although Galvin La Chapelle holds a Michelin star, it is reasonable to say their wine cellar—as one of the few restaurants in London to hold a vertical list of Hermitage La Chapelle—shows a certain standard of restaurant. Order the 1961 La Chapelle if you wish but be equally aware that the sommelier will help you choose a wine from their extensive selection for a far more reasonable price.

My opposite number ordered the charred Galician octopus—again a slightly misleading description of the starter as arguably the use of ‘nduja to flavour the octopus moves this dish from the North of Spain to the South of Italy. This is no criticism however, I prefer this Calabrian style octopus to the usual Galician, particularly when supported by the simple, clean taste of the Terre Bianche, Vermentino.

Grouse season had begun and, after months of game deprivation, the grouse special served with boulangère potatoes and blackcurrants was my only option. Matching well with the berry flavours of the South African Mourvèdre, Spice Route, this course was classic and hearty. I have one issue: the basil sauce accompaniment. However, luckily placed as one would a mint sauce, it was avoidable. If it was an attempt at doing for grouse, what mint does for lamb, it did not work; I am glad the grouse was dead and did not see such irreverence. Leaving the basil/mint blasphemy in the cupboard, as one invariably does, I cannot fault the rest.

Devouring, at the other end of the table, a wonderfully pink chateaubriand of Cumbrian beef with truffle mash and roasted bone marrow, the only distraction from the plate of my companion was an intensely ruby Château Grand Barrail Lamarzelle Figeac, St Emillion Grand Cru. The combination was terrible for conversation except for when my vegetable-identifying services were needed—rainbow chard, if you are interested. Silence is golden? Not if you must write an editorial.

Cooler weather indicated it was time to start eating things that were dense and chocolatey again so I chose the Valrhona chocolate pavé.  It was more than satisfying—there was enough chocolate to pave a cathedral and yet, the macerated cherries worked well to cut through its supreme richness. Caramelized white chocolate was also an interesting addition and the thirty-year-old, Palo Cortado ‘Apostoles’ sherry added a pleasantly nutty element.

I would say however, that the apple tart Tatin opposite was the superior dessert. Simple, well-executed and a delectable square of syrup-soaked, thin layered pastry, paired with the glorious Hungarian ‘Oremus’ Tokaji Aszù. Perhaps it seems unpromising that the better dessert was the traditionally executed classic. It was not the [s]tart of a culinary French revolution, mais la révolution culinaire, ce n’est pas la tarte. Hard, and sometimes unnecessary, there is no point in changing tradition whilst the populace is still shouting vive la pâtisserie glorieuse.

And why shouldn’t they? Returning to this notion of unorthodoxy, that I personally cannot see, it is more fitting to say that Galvin La Chapelle is, like its building, a contemporary restoration of timeless classicism. Galvin La Chapelle is well-worth a visit… and then a revisit

Ferrari is probably one of the most recognised brands in the world, let alone the motoring industry. Steeped in so much tradition that even the uninitiated can often name at least one of the models. With this, you can imagine my excitement and also palpable sense of responsibility when the phone rang and the publishing director tells me that I’ll be taking the new 488GTB to France for a week. There are worse jobs, I suppose. Fast-forward three months and there I am, staring the car in the face, about to be handed the keys. The first thing that strikes me is that it’s not finished in the famous Rosso…