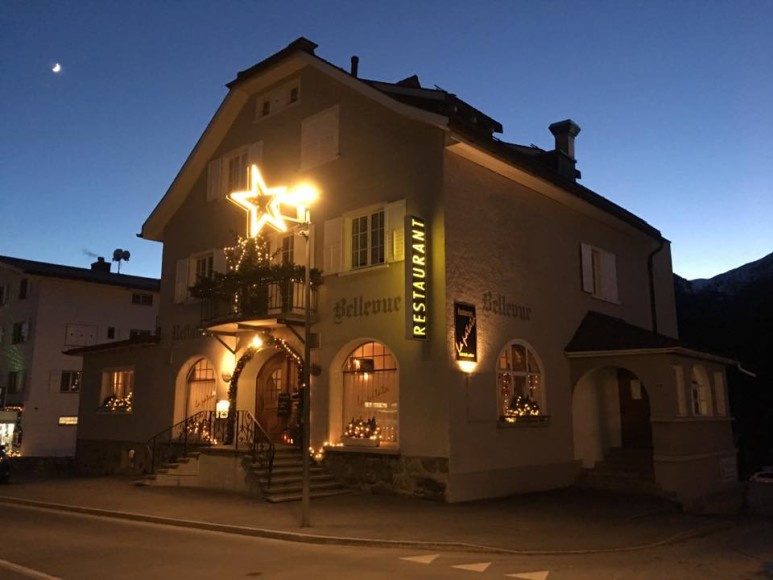 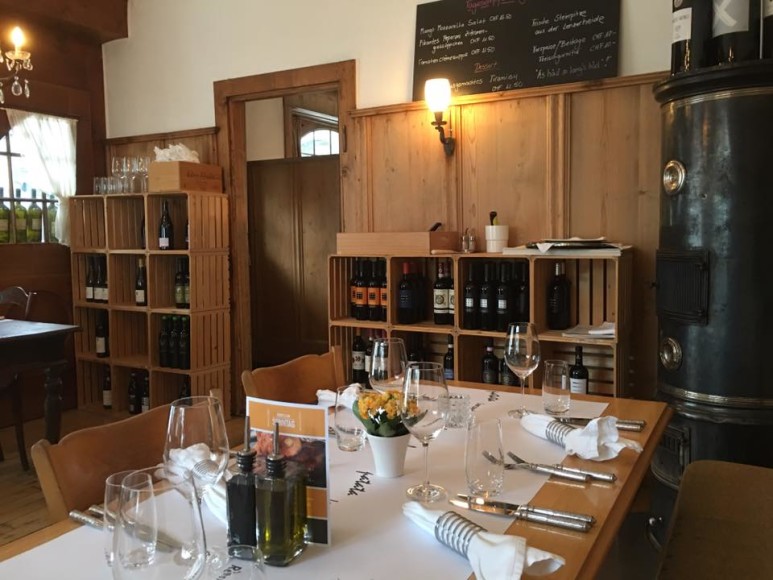 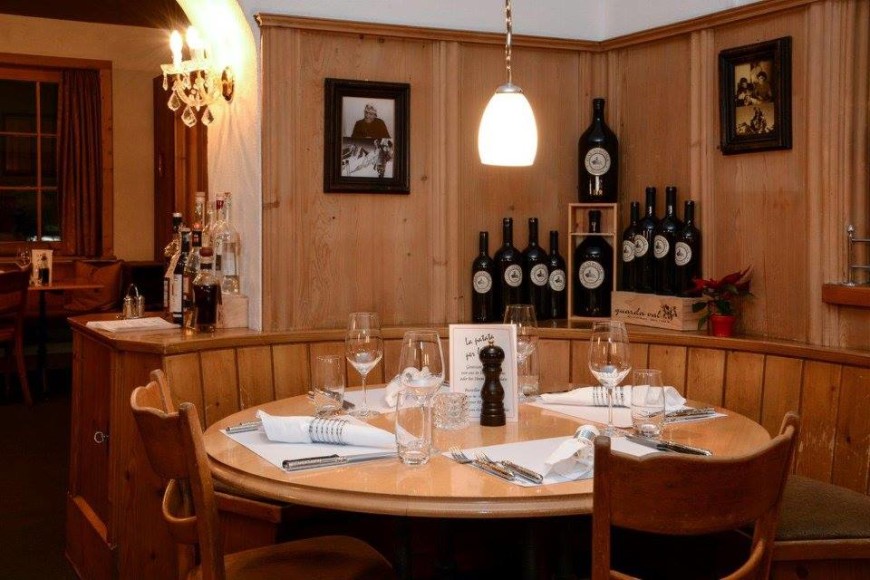 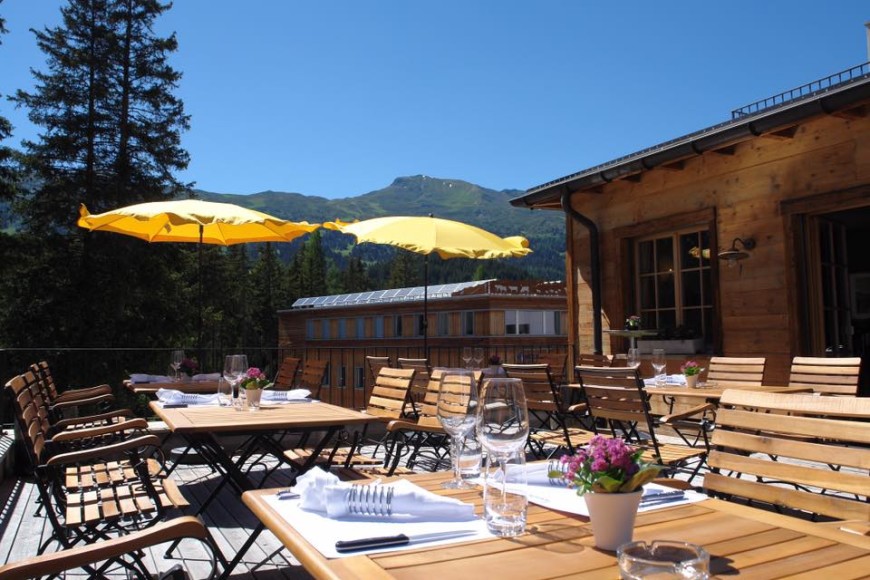 Occasionally, whilst reviewing a restaurant, you come across a story that adds a real insight into the passion behind a business. Then, once in a while, you find one which really touches your soul. Having dined at La Patata, a classical family restaurant in Lenzerheide, we were introduced to Giancomo. The restaurant was his brother’s love and life’s work. Unfortunately, five years earlier, he was killed in the valley, in an avalanche. Giancomo took the view that, because the restaurant was, as he says, ‘his brother’s life’, the building should go to the employees. It now stands as a fitting tribute, and his brother’s dream lives on.

Being towards the end of the ski season, it was unusual to find somewhere that still had the glow of life. From outside, you can hear the sound of cheerful voices – which is why Mr. Robinson, our publishing director, and myself ventured in.

We were immediately welcomed warmly and shown to a table at the bottom end of the restaurant, next to large cordial group of locals, who were clearly enjoying themselves. The restaurant itself is in classic ski chalet style, a stone building clad inside with pine flooring and pine panels almost up to the ceiling. A beautiful antique woodburning stove occupied one corner of the room. We really didn’t know what to expect, as we had been advised this was a ‘hidden secret’, and that we should not miss dining here.

Simple pine shelving holds bottles of wine around the room and the tables are pine and functional. Some have red leather backs, others are like school chairs. Table mats are paper; subtly printed. More function is found in the square bottles that hold oil and vinegar, and there is sense of purpose about the dining area. This is a family who take real pride in their work.

Our waitress appears, smart, friendly and fluent in English. Mr. R and I are fully able to make our way around a foreign menu, but it’s always more relaxing when in a country with one of your lesser tongues to be able to indulge without pressure.

The wine list arrived with good homemade bread to cleanse the palate. I chose a bottle of 2015 Swiss sauvignon blanc, made by Peter Wegelin some 24-miles away in Malans. The list itself offered some 10 wines from the local Canton, along with a good selection of familiar German, Austrian, French, and Italian bins. This was part fermented in oak, giving it a soft nose of gooseberry. The back note was flowery with some vanilla. Lively and elegant, it sat wonderfully with what was to come.

My starter arrived more akin to a French brasserie, and I let my knife travel gently through the foie gras which I had been presented. The bloc of duck liver had clearly produced in-house, and as the first piece touched my tongue, it started to melt with a sweetness and finesse. There it was again: chef had added a touch of his own, and the subtle hint complementing the richness was vanilla. Nothing less than inspired. I looked across the table and similar expressions were emanating from Mr. Robinson, who looked in angelic ecstasy. I took another mouthful of the sauvignon and allowed the two hints of vanilla – one oaky, one sweet – to clear my palate.

We had both gone for more filling (but again, more traditional) main courses. We weren’t to be disappointed. I had gone for the ossobucco alla milanese, accompanied with homemade gnocchi; my fellow combatant, the beef with the potato rosti. Whilst these are simple rustic dishes, it quickly became apparent that we were in the hands of a master. The gnocchi were perfect shells of potato, sucking up all the juice of the veal. The meat itself was cooked rose-pink, just as I like it, so beautifully sweet, you were left in doubt it had great provenance.

Opposite me, the potato rosti was disappearing fast. Again, it was expertly delivered, crisp while still soft in the middle. The beef had been slow-cooked and fell apart with the insertion of a fork. This was impressive, old-school alpine food, and it’s no wonder the restaurant is so busy. We had accompanied these dishes with a house Italian red and white, respectively, by the glass, and found the offering to be more than acceptable.

There was no room for anything other than some sublime homemade gelato and some very good Italian coffee. The ice cream was creamy and flavoursome, with coffee of the quality found in Rome. The decision to recreate an affogatto al caffé was easy, combining the two in a bitter sweet mélange. This drew an admiring smile from our host.

This was a quality experience, with carefully sourced ingredients, treated with respect and delivered with creativity. Chef left the exile of his kitchen to ask us what we thought of dinner, and we had no reservations in verbally applauding what we had eaten.

A small glass of armagnac in the style of a ‘trou’ followed to aid digestion. This was promptly followed by a shot of grappa, courtesy of our hosts, to keep the cold out on our return to our hotel. It was then, as we were leaving, that we met Giancomo – who we raise a glass to for allowing such a great venue to live on.

Iain Beaumont is the founder and Managing Director of Venues and Ventures. Since ditching the City, Iain has worked on some on England’s grandest country estates and leading luxury venues, refining his eye for spotting new opportunities and helping businesses realise their potential.