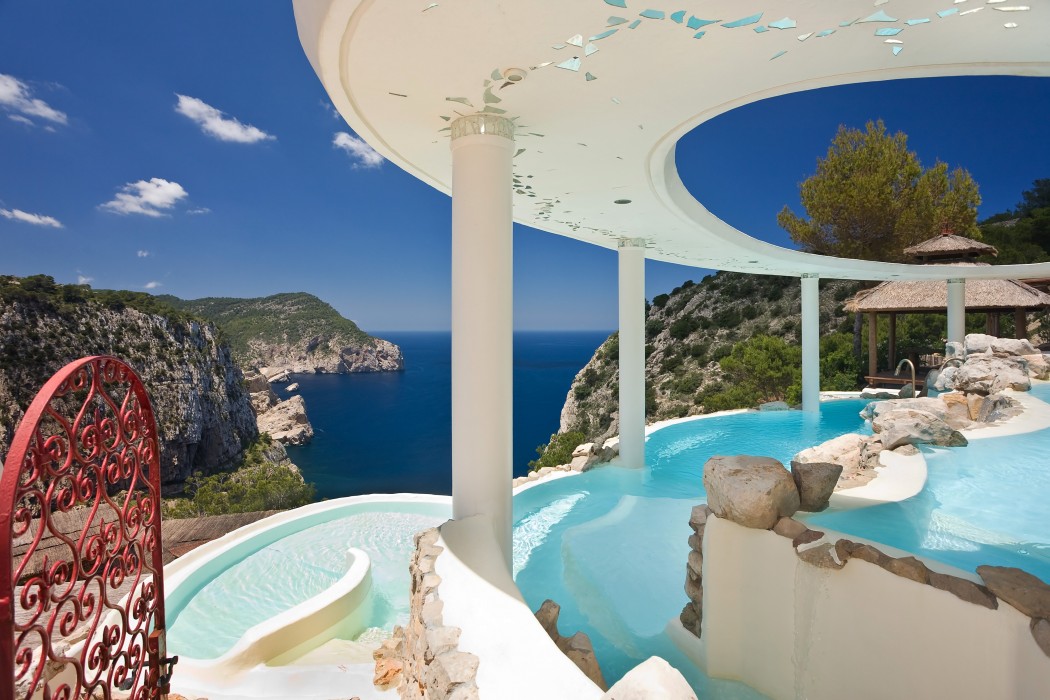 Ibiza must’ve been made on the sixth day, when all that God had left was a brutish hangover and some clay. The island is architecturally unremarkable, a brown featureless lump, where people don’t come for the history, or the culture, but for the twenty-first century Mecca of clubs, comedowns and sexually-charged coastlines.

At least that’s what I thought.

We’d spent the first four days in the heart of clubland, Platja d’en Bossa, at a hotel called Ushuaïa, which if you know Ibiza, is a place where the party never stops. Everything about this part of the island is imported junk from university campuses in less-sybaritic parts of Europe. Namely Manchester, where a night that ends without being covered in foam, florescence and vomit probably wasn’t a good one.

Now that we’d done the ‘up’, we were on our way north, to come hurtling back down to terra firma. And what a landing.

Located on the north-west of the island – ensconced quietly in a cliff and camouflaged by majestic pine forestry – Hacienda Na Xamena is unlike anything else you’ll experience in Ibiza. For a start, you can’t hear the continuous, metronomic thump of dance music resonating through your central nervous system. Instead, there’s simply nothingness. And despite being the most aesthetic and sumptuous hotel in Ibiza, there’s none of the pretence or pomp that you’ll find in Platja d’en Bossa and San Antonio.

Hacienda was refurbished just two years ago, having first opened in 1971, so the paint is still fresh and the staff’s pride still palpable. Its makeup is barefoot-chic, white-linen colonialism, and grand orientalism, all working effortlessly to welcome and relax you: it feels like a secret, hushed and runic, with opulent rooms brandishing imported artefacts, freestanding baths, grassy balconies with corner hot tubs, and nearly 200-metre-high views over the shimmering Mediterranean. It’s no wonder the hotel markets itself as a romantic retreat; it’s the perfect place for honeymoon, or even to get married.

The building itself was designed by the Belgian architect Daniel Lipszyc, whose son, Alvar, now runs the property. Michael Winner famously hated the place, giving it an acerbic review in his Sunday Times column, Winner’s Dinners. But I couldn’t disagree with him more.

The poolside at Hacienda is serene and idyllic, with glowing azure water, noble palms, and a secluded upper suntrap where your every whim is catered for: beers, wines, cocktails, tapas, and full-blown lunches of seafood and steaks. The gastronomy is consistently impressive, as seen in the hotel’s main restaurant, Eden, where the views are unlike anywhere else on the island, and a smaller restaurant next to the main bar (the wagyu beef, though expensive, is totally worth it).

During the daytime, the thalassotherapy spa provides a perfect break from the sun’s indulgences: essentially a water massage, this is a series of outdoor, heated pools, jets and waterfalls, each with their own remedial features. Again, the view here is what gives meaning and memory to the experience. The spa also offers the usual menu (obviously), with everything from facials to deep tissue and Thai massages.

You’ll also have access to tennis courts, a gym, pools, a volleyball pitch, mountain bikes, a pétanque court (that’s bowls to you and me), and a games room with consoles, fussball, ping-pong, chess, and of course pool tables.

Practically all the 77 rooms have sea views – and trust me, you don’t want to end up in a room without one. Most of the suites, as briefly mentioned, have private gardens-cum-balconies, complete with artificial grass and hot tubs; little touches that make the experience so much more delectable. The only downfall is that some balconies – thankfully not ours – are overlooked by others, so privacy could be an issue (unless you’re into that kind of thing).

Our room had was airy and blissful, harking back to bygone colonial era. Everything is draped in white and built in mahogany. The bathrooms are a highlight, particularly the overhead ‘rain’ shower, with enough room for a small party. The rooms – actually, the entire hotel – really comes into its own at night. Across the ebony sky, you can play join-the-dots with constellations and shooting stars; ink-blot shadows leap around the rocks and pines like a species of their own; and the phosphorescent moon protects the island like a military searchlight.

For a decent-sized room at Hacienda, you’re looking at prices from £500 a night. But when you’re paying upwards of £100 just to get into a club in Ibiza, the price of the hotel becomes negligible. Indeed, when it comes to staying at the best hotel on the island, the discussion should always about experience and never about expense.

When I called Rolls-Royce to ask if I could borrow a Phantom Drop Head, I was a little despondent when informed, “I’m terribly sorry, sir, but we’re phasing them out”. In the most first-world way possible, I was sad about this. Although that was quickly swept away by the follow up of “…have you tried the Dawn?” Thinking that, as a consolation, they were going to send me to lunch with the lady who cleans the offices, I enquired gingerly as to what he was talking about. Well, it transpires that the Dawn is just over seventeen-foot of wood, leather, aluminium and automotive pornography. Because (in England, at least) we…