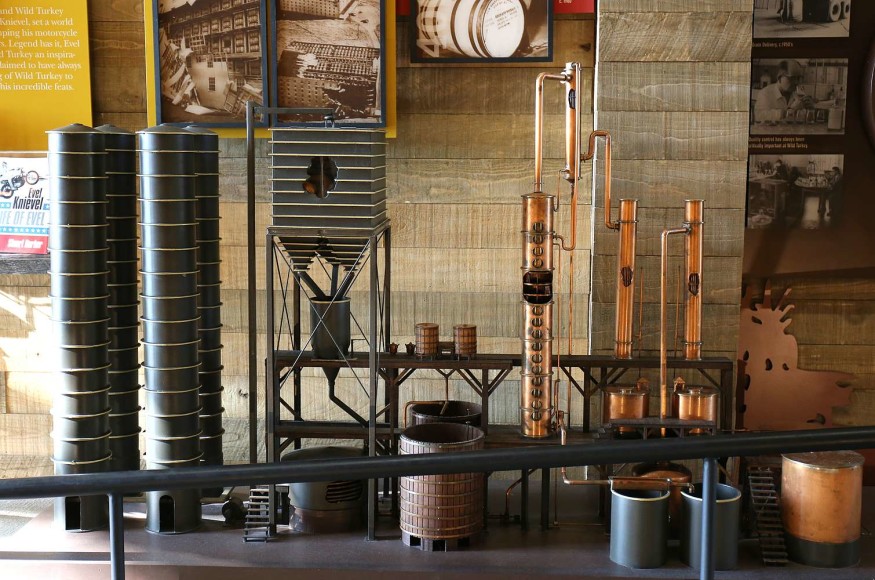 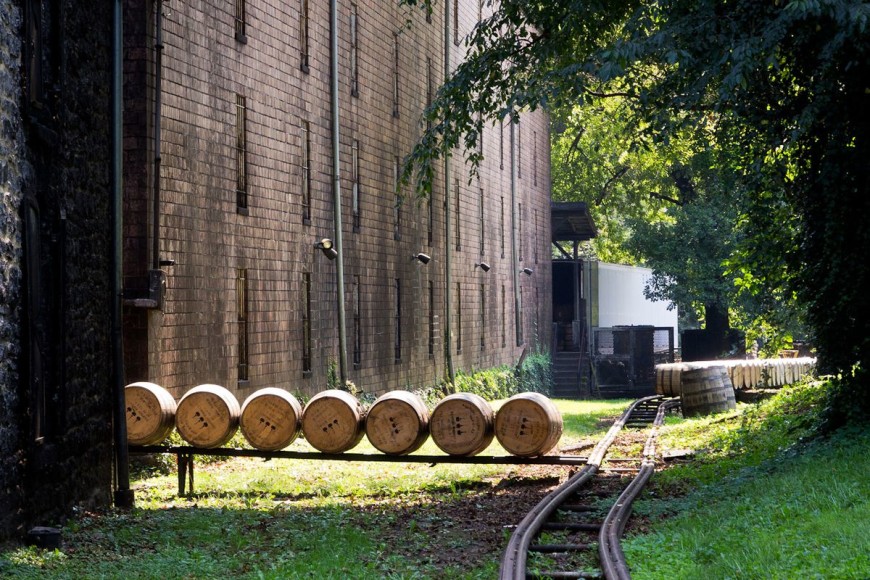 Bourbon is undoubtedly the most misunderstood spirit of the bar shelf or cocktail cabinet. Never has a spirit sparked such an immediate cry of denial and reaction from people. No doubt because they tasted a brand poured far too long, non-premium and solo over ice. Like many things, it’s about opening the mind and looking for the right one that fits your taste profile. Bourbon now comes in many tastes, shapes and sizes so we decided to explore subject with the best distiller in Kentucky, Eddie Russell from Wild Turkey, on a rare across the pond visit and get to the bottom of this spirit.

Bourbon is rooted in family tradition, when Jimmy, Eddie’s father, started producing Bourbon there were around 57 distilleries, in 1981 when Eddie decided to follow the family tradition there were just eight. Five big family brands drove the industry and they were all connected and on the best of terms, operating in their own niche market spaces making ninety-five per cent of all production. He tells of his father and the other influential makers as being high school graduates, and although they had no biochemistry degrees they could tell you how a tree, its age and where it was from could change the taste and composition of a whiskey. The dark art in bourbon, literally, is taking a barrel and making the end result taste the same. Not as easy as it sounds given the fact the barrel will add and take flavours differently given the prevailing meteorology also.

This where part of the confusion lies, not all whiskey is bourbon but all bourbon is whiskey. What sets the two apart is that bourbon is the most highly regulated spirit there is. The governing rules state that it must be made from fifty-one per cent corn and be eighty per cent proof or less. It must be made in a charred oak barrel and be sixty-two and a half per cent proof when it goes into its barrel. Bourbon has to undergo a minimum of two years ageing and has to be at least four years old if you do not want to be required to state the age. This means between two and four years a bourbon will be designated in how many months old it is. Now it is important we don’t get fixated with age when it comes to bourbon, after all this isn’t the Scottish liquid we are talking about. It is important to understand this is a totally different drink and that after around 18 years old bourbon starts to lose its caramel flavours and gets very oaky and is not something you would want to drink. At the point of sale it has to be forty per cent proof as a minimum, and at the end of the process, you are not allowed to add any further additives to adjust the flavour or colour of the resulting drink.

Eddie says all he thought about in his town, when growing up, was how you were going to get away. The epiphany came when he realised that Bourbon was his heritage and it was the place he was “meant to be”.

Bourbon has had a big identity problem, but then again the ‘brown spirits’ business has as a whole. Vodka and clear rums upset the business from the moment they arrived. These clearer spirits were far easier to drink and once people became adjusted to these lighter styles it was hard to lure them away. Bourbon as a business had also concentrated on the Deep South as post-prohibition Canadian whiskeys had captured North America. The southern whiskey style remained polarised on sales in Texas, Kentucky, Florida and Alabama and nowhere beyond.

I asked Eddie what made Wild Turkey so unique in his opinion and he was quick to detail that ingredients were key. At their distillery, they have never utilised genetically modified corn and remain the only producer so to do. All their corn is from Kentucky and within a seventy-mile radius. All their barley is sourced from Wyoming and North and South Dakota and is sent for malting in Wisconsin to ensure quality control.

Barrels are key to the process and only American oak from Missouri, Kentucky and Arkansas are used at Eddies father’s decree. After decades of experience, Jimmy says elsewhere the oak is too hard and unable to breathe in the same way, producing a totally different result to the one they want to achieve. Wild Turkey uses what is called a number 4 alligator char, to give their Bourbon it’s characteristic colour and taste. All oak for their barrels is air dried for six to nine months and not kiln dried, this allows natural retraction and oil retention within the wood. Kiln drying can be seen as being akin to ‘forcing’ asparagus and can have a detrimental effect on flavours imparted.

During the process, thirty per cent of the original contents are lost over eight years of maturity. Years one and two result in the biggest loss as the bourbon soaks into the new, charred oak. When a bourbon reaches fifteen years, on average, ‘the angels share’ amounts to a loss of sixty per cent. Beyond this Eddie reiterates the caramelisation deteriorates and the whiskey takes on so much oak characteristic he would not be happy to call it bourbon. At every stage of the maturation process natural temperature control is employed- the open and closing of windows in the distillery move the air around the barrels in a pattern determined by the design of the building. Again in other areas such as Washington State whiskeys are artificially heat controlled.

The other key ingredient in the process is water and bad water will always show through the wine or spirit you are making. Wild Turkey is fortunate that their source, the Kentucky River, is of top quality. Being a limestone spring-fed river, it arrives pre-filtered and softened with all metals removed. This ensures any iron edged tastes are negated before they can even happen.
There is clearly no substitute for experience in the distillery either, Eddie says that his father has a mantra for his style of bourbon. He says that he “cooks it medium rare” to keep in the flavours; this approach keeps in fusel alcohols that turn into esters adding flavour into the mix. The further mantra of Wild Turkey is “barrel at low proof and bottle at high” allowing natural alcohol and flavour to develop.

Bourbon is an emotive thing to its fans and Eddie shrugs off the suggestion he is a bit of a sensei as far as his loyal drinkers are concerned. Whether that is true or not, approximately one hundred thousand visitors per annum make the pilgrimage to the Wild Turkey distillery. Tours are even conducted on Sundays, but after church, I am reminded, as the distillery sits deep in the ‘Bible Belt.’

Bourbon saw an epiphany when it started to become a cocktail ingredient around twelve years ago. Mixologists like Erick Castro at the time said: “the whole business is coming up with new drinks and we haven’t even learnt to make the old drinks.” Social factors were to contribute in the intervening period as the sixties generation wanted nothing their parents did and were very anti just about anything. They chose to object, drive different cars, make their own choices and drink very different things. The new generation now seems to want the drinks heritage and return to it but in a very different way.

It seems the concept of drink less, drink better is not only alive and well in the United Kingdom but also in the United States. Younger drinkers now want premium spirits and this includes mixing them in their cocktails. Mixologists have now risen to superstar DJ and celebrity chef heights and travel the world with their cocktail kit in bespoke roles and cases. This makes them important ambassadors for drinks brands, carrying their messages globally. If you want to access Wild Turkey through a cocktail, the Old Fashioned is definitely the place to start- long, cold and with the delicious hint of orange, it’s a great entry point using Wild Turkey 101.

Eddie used to spend his travel time around the globe educating drinks stockists wholly, now he spends seventy-five per cent of that time talking to those who tend bars. He says he remembers when the bar job was either done “to get through college” or by “old men”. He is a great supporter and fan of women in the drinks business and says he has twenty-nine year old in his team at the distillery who has one of the greatest palates he has witnessed. Sixty per cent of sales of bourbon are to women, as either a personal or family buying decision, and Eddie says this is a market you ignore at your peril.

Naturally, the biggest market for Bourbon is the U.S. After that it is surprisingly Australia, who have taken the mantle from Japan. Eddie still makes a thirteen-year-old Bourbon primarily for the Japanese market but says, the obsession with age of spirits and lack of understanding of the differentiation to Scotch Whisky has seen them tread a different path. Thailand and the Philippines are developing well as they are big consumers of brown spirits. China, Eddie says, is a difficult market, as it is primarily online and the re-education piece is very difficult on that basis. A new market doing well is private sales. A distributor or client can select their own personal two hundred litre barrel after tasting, and then the bespoke label for resale or their own consumption.

Eddie very much sees cocktails as allowing people to access and start appreciating bourbon, particularly the lighter styles, then introducing them into the taste so they can then access the more traditional or specialist blends. He sees this as being responsible for the last five years growth in the UK and also views it as necessary that what was meant to be a “sipping” drink becomes more mainstream.

When asked about the future and threats Eddie smiles. He says the biggest threat is not enough stock, as people then may move on. His biggest hope is that his son will make a Bourbon in his own style as he did for his own father Jimmy. I will raise a glass to that!

This bourbon is six and a half years old and the opening is very smooth. Obvious roasted flavours and sweet salted caramel characteristics. Starts very softly and expands to a full finish. Very accessible. A great first step into bourbon. Sixty per cent proof

A midpoint to move to or if you like aged Scotch Whisky from the island. There is a creamy sweetness to this mid-weight classic. The taste of smooth caramels, fruits and nuts start to show through. Eighty per cent proof.

A big hitter for sipping. Not easily accessible if not used to big spirits or just drink white wine. Full and round. Smoky dark caramel notes. Ideal to drink as a digestif. 8 Years old.

In this issue of The Review we interview Alex Chri

Kaspars at The Savoy – WC2

For the longest time, The Savoy has eluded me. I’ve passed its decorated facade on many occasions, but for some reason, its heavily recessed entrance has never drawn me in.