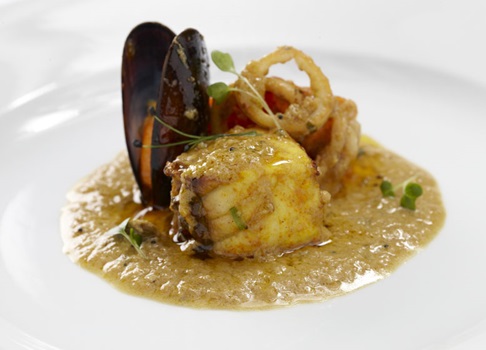 We got escorted off the premises of Cinnamon Kitchen the other day. The lady and I were frogmarched to the roadside by the scruffs of our necks and admonished for doing the unimaginable, the abominable, the detestable: smoking.

It was like being back at school. There we were, two grown adults, merrily imbibing the night, suddenly cut down by these health fascists. I understand not smoking next to the front door, but in an empty seating area? C’mon, guys, don’t cack on free choice. Other restaurants would be thankful to have a drippingly cool couple who think they’re Humphrey Bogart and Lauren Bacall smoking outside. This is Shoreditch, after all. You want that wanton, bohemian, devil-may-care aura on your doorstep. It’s just good for business.

It’s Friday night and busy. The vibe is convivial and chirpy, and we’re already drunk. There’s only one thing for it: the tasting menu paired with wines, because there’s no better judge of delicate gastronomy than two omnivorous inebriates.

Bread, dips and chutneys arrived, which tasted like the start of any Indian meal, only better, because it didn’t come from a jar. Naan breads fresh from the tandoor were well-baked and bursting with garlic, coriander and coconut. Superb.

One thing about bog-standard curry is that it all tastes the same: a tomato or yogurt base, tweaked with fruit and veg, then injected with heat ranging from mild to infernal. Curries are often too similar in consistency and so convoluted with ingredients that they are impossible to deconstruct. This is where Cinnamon Kitchen shines. Individual flavours that marry in the mouth are what make a memorable meal. With British and French food, it’s easy. However, the vast amount of stuff that goes into Indian food means it’s an art form.

A silky broth arrived with a sweet lobster tail buoyantly sitting on top. The triad of coconut, chilli and cumin was calm enough to let the lobster take centre stage, and the colours of white and pink meat against the exotic orange broth exuded the very spirit of Indian cuisine.

The courses kept arriving; a merciless onslaught of gastronomy. Sea bass and venison were all cooked to perfection and complemented by a divine knowledge of spice and balance. Not a single mouthful was overwhelming. The deer, in particular, tasted ruddy and wild, like eating an eccentric old aunt.

Too often duck is served like it’s just been stolen from a butcher’s chopping block – not just underdone, but still being read its last rites. This was evenly pink and crisp on the outside, but still, no one will ever convince me that duck belongs on an Indian menu – not even this dish.

Though impressive, this tasting menu lacked one thing: cohesion. Plates of food arrived, we ate them, and more came out, but there was no sense of journey, no narrative, no first, second or third acts. A tasting menu needs to create a relationship between each plate of food to avoid turning into a showy gastro-wank. But self-indulgence aside, Cinnamon Kitchen more than justifies its existence.

Sri Lanka is a well-established destination, with inspiring experiences like national parks, venerated temples, tea plantations and rose-gold beaches. But as a short trip, this was more about the quality not quantity, a focus on achieving an authentic starter-pack sense of the people and the place. So we stripped the itinerary right back to focus on just three things. First, to visit some of the iconic Buddhist temples and start to understand this powerful faith and its influence on three quarters of the population, Second, to see the natural and diverse beauty of Sri Lankan beauty (despite its relatively small size Sri Lanka in fact is in the works top five hot…