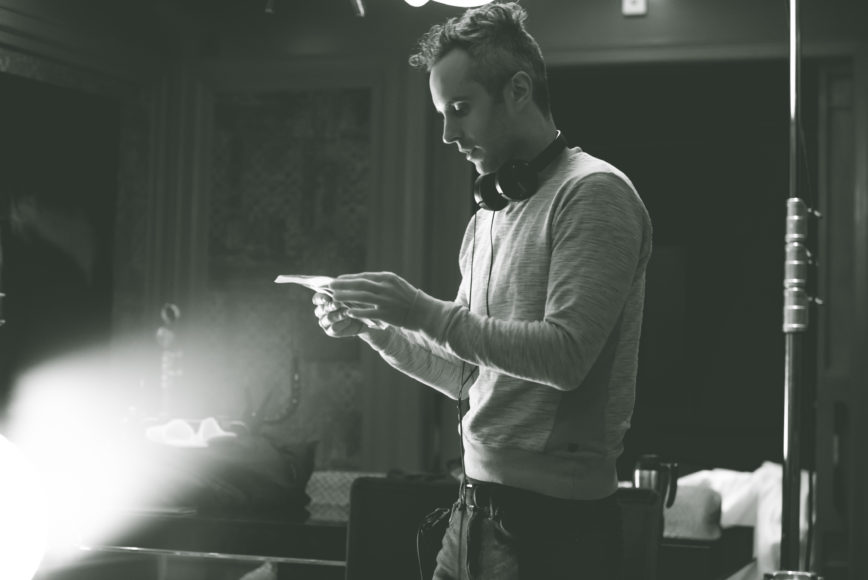 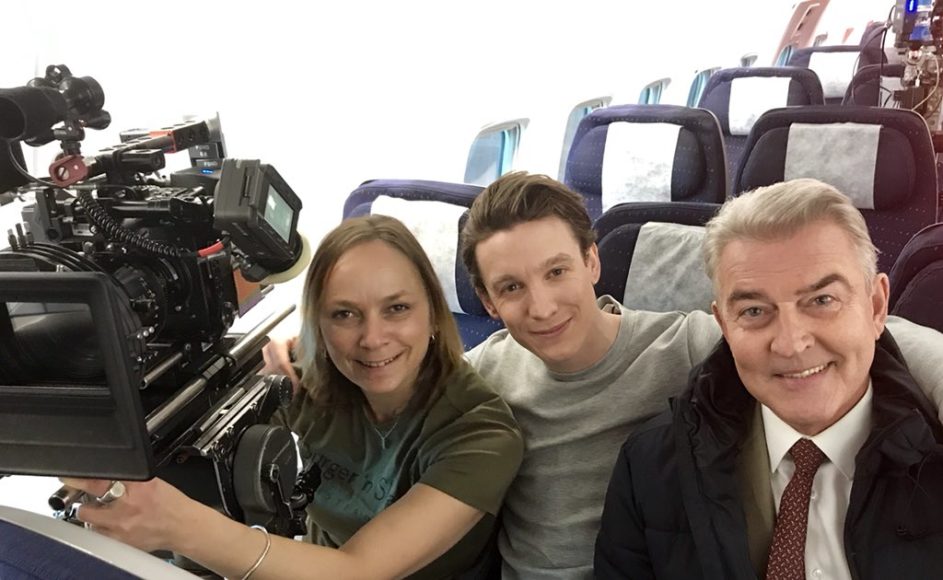 Directed by Andy Newbery with Cinematography by Oona Menges, The Host is the first internationally distributed, English speaking, Dutch feature film. It’s a tense thriller, with a veritable cavalcade of talent from Emmy Award Actress Maryam Hassouni, Mike Beckingham and Dougie Poynter to Togo Igawa and veteran actor Derek Jacobi. The Review sat down with Zachary Weckstein, founder and Producer at Pearl Pictures Productions to talk about his first feature film, The Host.

Where is home at the moment Zach?

I have lived in several countries growing up, the U.S, Australia, the U.K. and the Netherlands. I did an internship in Malaga, Spain and ended up living and working there for a little over a year before finishing my studies in international business. But at the moment, The Hague is home and where I chose to build my company. After graduating with my Masters in Filmmaking at the London Film School, I decided to go back to LA and visit my family. Obviously, Hollywood is still headquarters for the industry unless you’re going to go into the Chinese or Bollywood market. But if you are going global, Hollywood is the place to be. So, while in Los Angeles I visited with several production companies. It was an interesting time for sure.

So how does living and working in the Netherlands compare to growing up in California?

The most obvious is the weather. From growing up on the beach in San Diego where it was common to surf, go sailing and spend most of the time outdoors, and then coming to the Netherlands where you have a definite four seasons and a full winter wardrobe. Because I lived in London before moving to the Netherlands, I had already become accustomed to life on this side of the pond. Now when I go back and visit my home town, it has really changed for me because I look at it from different eyes from when I was young. I saw that there was more value in coming back to Europe to make films and not having to be a small fish in a big sea.

How are you finding the European film industry, I know you studied in London of course and you’ve lived, well everywhere, but how do the two media markets merge?

I thought I would bring different attributes being from the U.S. and growing up in the American marketing culture. I enjoy the marketing element that Hollywood brings, along with the beauty in European storytelling and culture, for me I like to mix both worlds. I found this helpful to incorporate both views into my filmmaking and I think that allowed me to understand a broader audience. Hollywood produces massive productions but sometimes smaller European films have such heart and soul and amazing stories. In order to get an international audience interest, the look of a film is affected by elements such as its lighting, costuming, locations, etc.. I believe that good films bring both worlds together. I think that’s what Hitchcock and these other great filmmakers and actors were able to do when they came over to America, and that’s some of the value they brought which made them great storytellers.

What made you land on being a Producer over above all the other roles and departments?

I started at a young age acting in musical theatre, and given my curiosity, I was exposed to various roles in theatre productions. I continued in the arts throughout my youth and growing up. My interest in producing all started actually during my internship in Spain. I worked for a Producer in Malaga and at the same time I was working for a Director in New York. The Spanish Producer recommended that I take a look at a Documentary, ‘The Kid Stays in the Picture’, the story on Robert Evans life. The moment I watched it, it changed my entire world and led me to understand what I truly wanted to do – produce films. From the very beginning in film, I was passionate about the creative side of filmmaking as well as giving something back to society.
When I saw that documentary, I really identified with the Producer role. Robert Evans began as an actor, he had a creative side to him but he had a business side as well. Evans was notorious for his role as a creative Producer. There have been plenty of producers that had finance or understood finance of film and wanted to get into the creative side but weren’t really talented in that way. Robert had an eye for talent in front as well as behind the camera, as well as a vision and understanding of what made a good story. I felt a lot of similarities with Evans in the start of his career, and I wanted to make my mark in the industry.

You honed your skills at the London Film School, didn’t you?

What was so great about the London Film School and what sets them apart from other great filmmaking Universities is that it’s mandatory for their students to experience every single role on set. In my two-year Masters in Filmmaking course, I was trained as a Director, a Cinematographer, a Camera Op, an Editor, basically all the main roles. It’s a practical Master’s Programme, and the facilities and equipment that the University has allows students to experience and strengthen their talents on filming. We were able to work with many different cameras and lenses, using film as well as digital, filming in studios and building sets, and filming on location. I was able to create various film types and genres within the LFS mandatory 13 films. It was a tremendous education, and I totally submerged myself into each and every role(s).
This really gave me not only hands-on experience, but a broader understanding of filmmaking.

So The Host, who approached who, how did the project get started?

Laurence Lamers, a local filmmaker approached me in mid 2017 with a story and a partial script. We spoke, and the idea needed a bit of work. I took the project on, developed the story and brought on two scriptwriters. Then started looking for film crew and finance. I was fortunate in both areas, bringing on a hard-working crew, as well as receiving full funding in a very short period of time.

Funding came in at the very end of 2017, and I started immediately with the writers. Then pre-production began at the beginning of 2018 and we set to securing some big-name actors. The film had loads of potential as a low-budget because we were able to get actors such as Emmy Award winning Dutch actress Maryam Hassouni, Mike Beckingham, Dougie Poynter, veteran actors Derek Jacobi, Jeroen Krabbé and more. It’s so great that sometimes talent comes to you. We started principle photography in March 2018 and into April, with a pick-up week in September. Post-production and the international distribution contract was completed by August 2019.

It’s clear the casting went incredibly well so let’s talk about the department heads, who came on first?

I was in discussions with several Directors, and wanted a Director who could take the Vera character and do her justice. With the film’s female lead character who suffers from an abusive parent, I was looking for a Director that was able to be sympathetic to her role.
I brought on Oona Menges the Cinematographer in the meantime as she is a good match with my philosophy of film production. As it’s so important for the Director and Cinematographer to have good collaboration and communication, I spoke with Oona about Directors that she worked with in the past and knew. I decided on after a few meetings, Andy Newbery. All the other department heads flew in quickly, with a wide array of experience and talents, all hard-working department heads.

Location wise, you’ve split principal photography between the UK and Netherlands, how do they compare?

Both Amsterdam and London have their own unique beauty. Holland is really welcoming to filmmakers. They’re two different countries so there is of course a difference in each country’s architecture, skies, etc., but the main difference for filming is that in London we had to pay for film permits on certain locations and in Amsterdam and all through Holland there wasn’t any fees. There is so much beauty in the Netherlands and London, so I wanted to make sure that all the locations that we had were ones that an international audience could appreciate but also see each location in a different light.

So how was the budget put together for this project?

I was looking for investors and sponsorships that matched the project and could bring it to the highest production value. It was straight-up independent finance, and I was able to raise all funds in 3 -4 months.

Well at the moment I have a pile of scripts so I am just seeing what’s going to be the best fit for the coming years. I am evaluating these at the moment, as well as concentrating on the marketing of The Host and the rest of its worldwide release.

The Arab world’s most successful designer showcased his Autumn/Winter 2013-2014 Paris Haute Couture collection’s sartorial elegance – every little girl’s dream. Undoubtedly, the 49-year-old Elie Saab has emblazoned his mark on the fashion industry with celebrity clients including Katy Perry, Mila Kunis, Rihanna, Christina Aguilera and Bollywood actress Aishwarya Rai. Impressively, Saab had dressed 102 international celebrities by 2010. Additionally, he is an established designer amongst royalty with habitué, including Queen Rania of Jordan, Princess Madeleine of Sweden and Princess Beatrice of York. By – Arnelle Paterson This collection would not have been made possible without his atelier of 500 seamstresses. The models graced the stage with perfectly sleeked hair and…