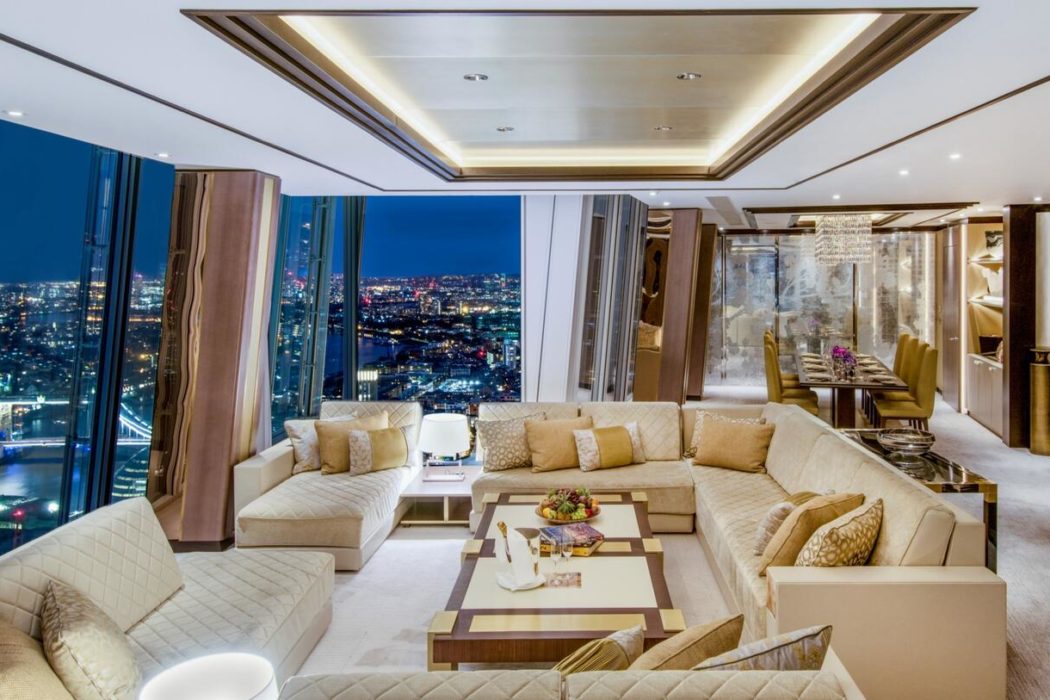 I’m bored of the Shard. I expect you’re bored of it too. I doubly expect that you’re bored of me boring on about how bored I am of it. Yet here we are, back on these well-thumbed pages, trying to reconcile the first architectural abomination of the twenty-first century; the final phallic frontier before the circle completes, the world implodes, and we go back to living in huts, eating mud, and slinging shit at each other.

I wasn’t planning on staying in the Shangri-La Suite. The Review had booked me in to do a write up of a middle-of-the-road room – if Shangri-La has such a thing – and I was even thinking of bailing at the last minute. You see, until now, my trips to the Shard had mostly been flops. Aqua, for example: a restaurant of such mediocrity, it’d be closed by now, were it not for its gawping bird’s-eye of London.

A marketable view, like an attractive waitress, is a smoke-and-mirrors distraction from the food on your plate. Like most of what makes up the Shard, Aqua is serviceable and (you guessed it) boring; a destination restaurant in the sky where the only way is down.

The first Shangri-La I stayed at was in China, where the hotel looms on the upper floors of Beijing’s World Trade Centre complex. Not exactly subtle. The one in Paris – my favourite – is set in a Napoleonic family mansion, where you can wake up to an eyeful of the Eiffel. You see, there’s nothing understated about this brand. It typifies conspicuity – and let’s face it, there’s really no place it could park itself in London other than the Shard.

Back to the eponymous suite – and forgive my crassness, but let’s talk money. This is a bum-clenching £14,000-a-night of room, yet still costs less than The Lanesborough over on Hyde Park Corner, which retains the epithet of ‘London’s most expensive hotel’ – a head-scratcher of a fact, especially when stepping into the Shangri-La Suite for the first time. Sure, The Lanesborough gluts the appetite for a bygone sense of prestige and grandiosity, but as much as I love it, I’d rather something cooler, more modern and more minimal.

All 188 square metres, to which you arrive by private lift, was designed by Francesca Muzio and Maria Silvia Orlandini with forensic detail. It would have to be, given the tapered ascent of the building. These two run FM, the Italian atelier, whose main gig is designing superyachts – so making the most of unusual space is what they do best. Moreover, the same maritime aesthetic permeates this suite: the whites, the creams, the beiges, the browns; the cabin-feel furniture; the telescope that takes centre-stage at the 180-degree window.

It’s just all so unimposing – a hard feat when, essentially, this is overblown luxury. But this suite is undoubtedly the sum of its parts. Take the marble-clad bathroom, complete with television-cum-mirror screens, walk-in rain shower, hot whirlpool bath, heated floors, and his-and-whoever’s sinks. It screams the decadence that’s so understated in the living area. 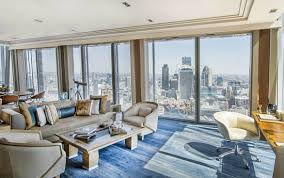 The walk-in dressing room could host a small party, while the dining area is smart, seating around 10 guests, with a kitchenette for a private chef too. The well-equipped office comes with personalised stationary – an almost neurotic level of detail, but yet another example of the lengths some hotels will go to make you feel like an A-lister for a day.

All of this is held together by a 24-hour butler service, which I didn’t use, but might’ve, had I needed to order some hookers and blow. And speaking of service, as with any Shangri-La, it’s warm and solicitous, but never obsequious. The people here are unwaveringly professional, most having worked in the industry for years before landing this gig. And you can tell they’re happy about it; everyone proudly wears a transnational smile.

But like it not, as with everything at the Shard, this stuff is all incidental to the views. Here, you get an unfettered look over half of London: a grey, rambling cacophony. Stood in the Shangri-La Suite, in the tallest building in Europe, watching the city below, feeling its rhythm, seeing its mechanics, all with a whiskey in hand, the feeling is palpable.

Life, at least in the material sense, doesn’t get much higher than this.

Find out more about Shangri-La at the Shard

The fascination of ‘taking the waters’ for health and well-being seems to be imprinted in the human condition. From the Turkish baths of the Ottoman Empire, and the great bathhouses of the Roman Empire, to the modern sophisticated spa, we have used water as part of many social, physical and spiritual rituals. Hot springs, cold springs, sulphur springs, sea water, river water, mountain water: this precious natural commodity has provided external and internal therapy for every generation and culture. To review Evian, the source of one of the world’s best-known mineral waters, and home to the renovated Evian Resort, I jumped on the short flight to Geneva, crossing over the…