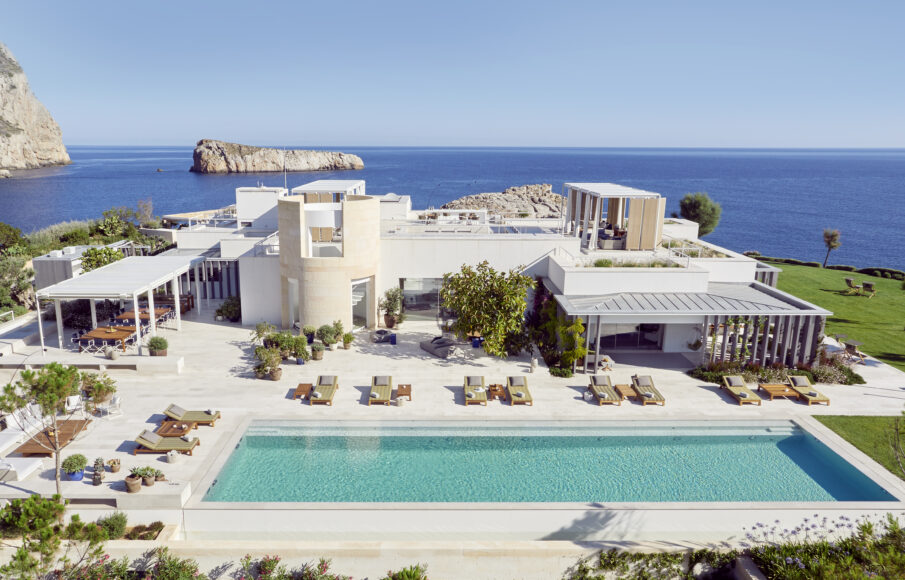 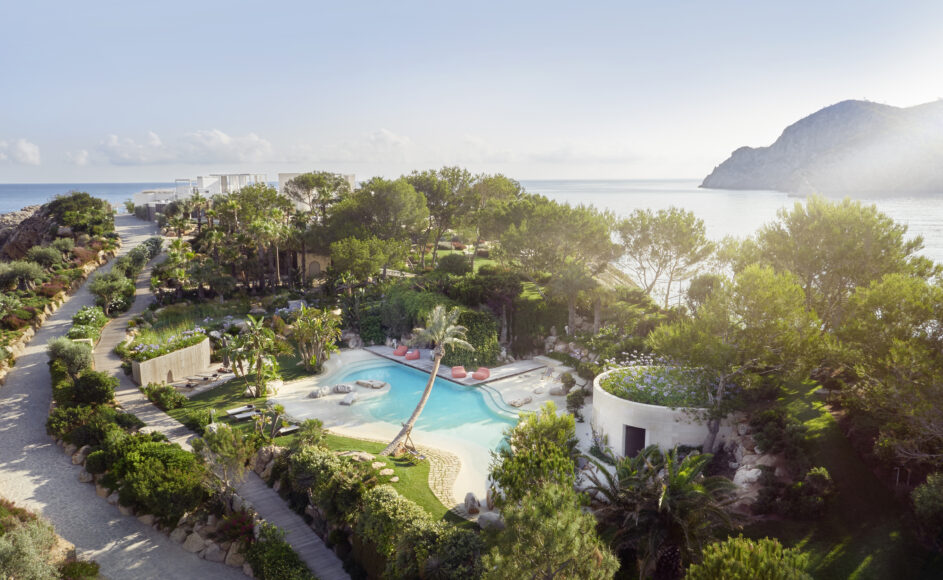 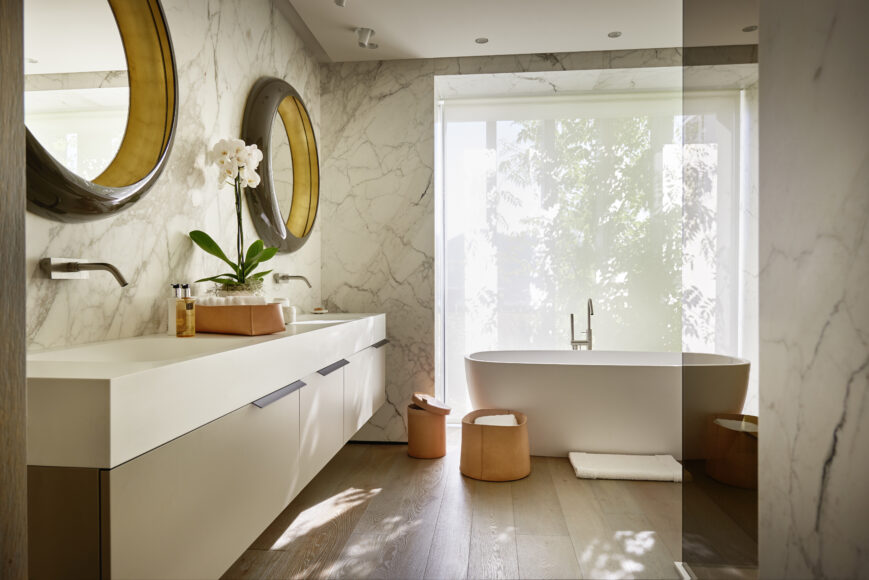 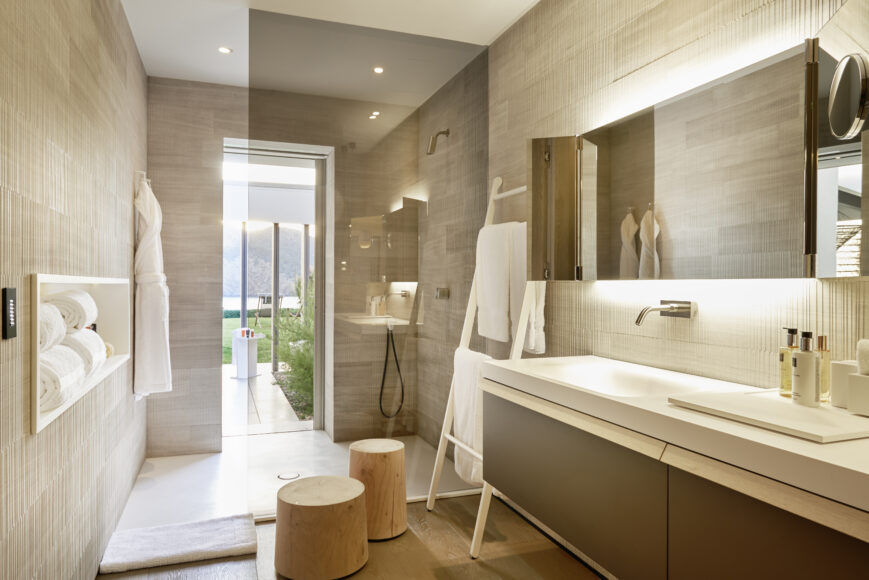 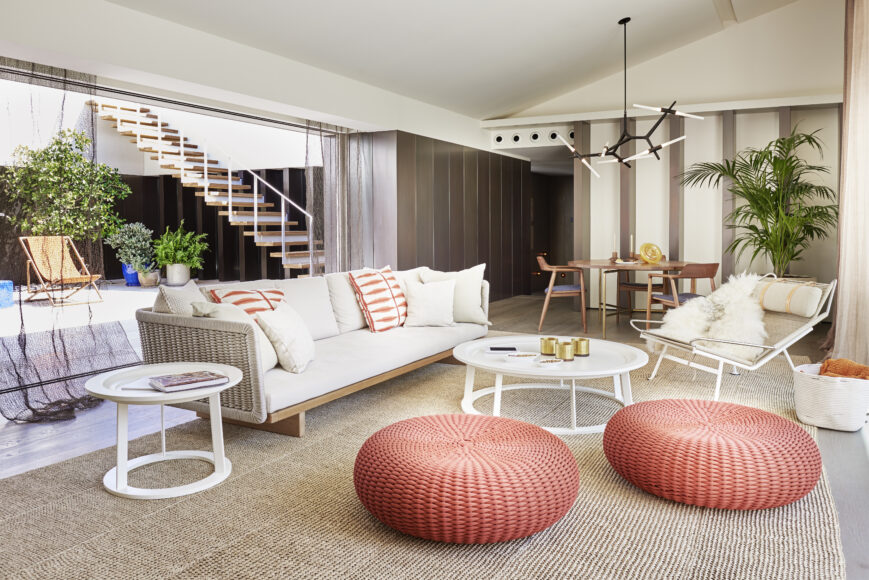 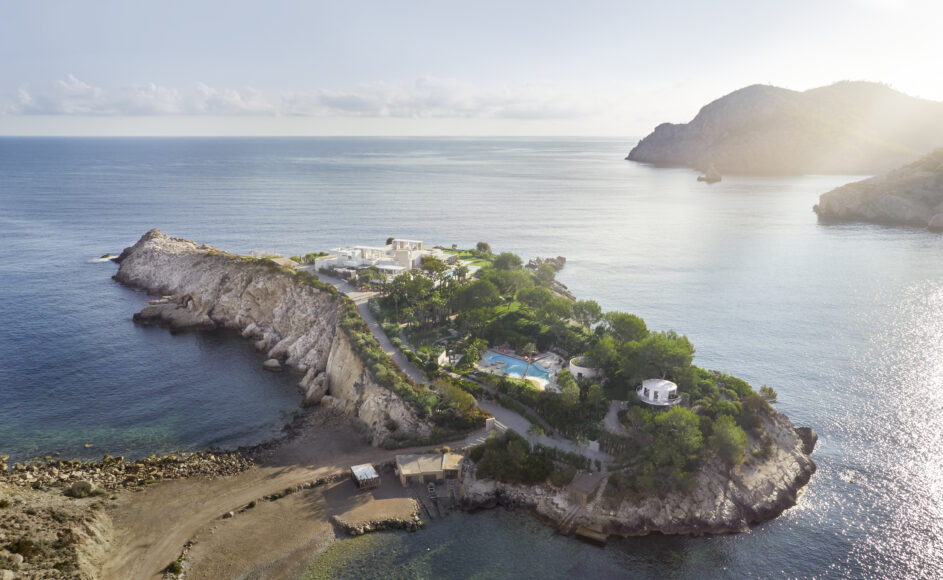 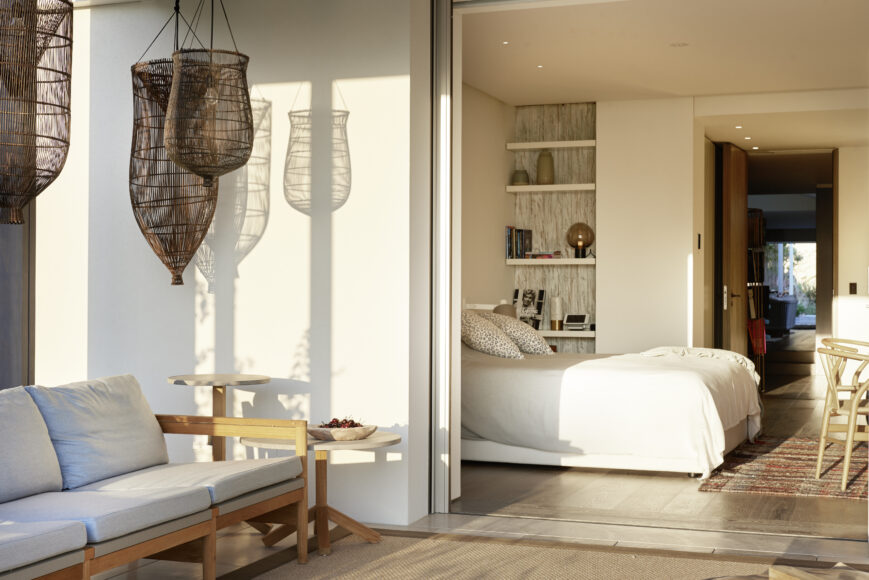 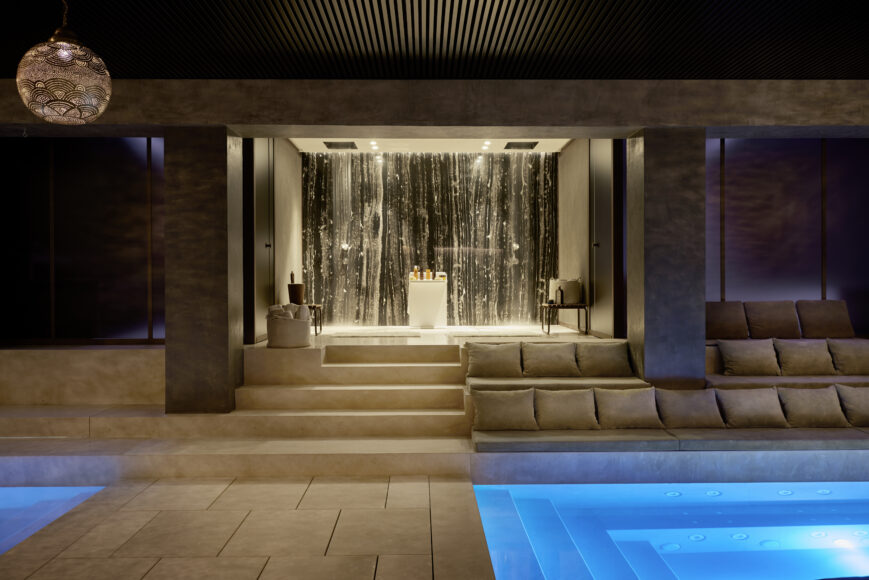 “Come and enjoy the island for a couple of days,” read the invitation from Isla Sa Ferradura, Ibiza’s only private rock in the ocean, a property so exclusive that it eschews advertising for word-of-mouth and deters any other undesirables with its bum-clenching £200,000-a-week price tag.

Neither the wife nor I had travelled abroad in over a year, not even for work, due to lockdowns, so we were raring to re-enter the game at the highest level of hospitality – a prospect as thrilling as it was daunting, especially as we’d be taking Coco, our two-year-old, who’d never built a castle in international sands before.

Coco was actually conceived the day after our last trip to Ibiza, in 2018. I’m not sure if there’s some clumsy synchronicity to that, but it’s worth mentioning, if only because, this time, we’d be travelling with another bun in the proverbial.

But it’s not just the responsibility of children that would make this visit so estranged from the last: we’d also be nestling up north, where life is sedate and the idea of luxury can be explored without the compromise of pilled-up partygoers, thumping basslines, and the forced construct of ‘havin’ a good time’.

The promise of Ferradura isn’t just about being ‘Ibiza’s only private island’, but a sybaritic seclusion that only a few ever get to experience. And it all begins by email: a handful of questions so that Ulf, the island’s manager, and his team could start getting to know us: our favourite food and drink (where do you start?), the type of service we prefer (aloof or solicitous), and the little things that would keep us happy whilst away from home (particularly for Lady Muck, whose various demands for comfort far outweigh her two years).

The island’s private car picks us up, as it does all guests, unless travelling by yacht or helicopter. Taxi drivers certainly won’t brave it. “It’s like being taken to a Bond villain’s lair,” I was told before coming. And except for a blindfold, that’s no joke. Our blacked-out, four-by-four Mercedes courses north towards Sant Miquel, almost jeopardous as we navigate the thuggish, barrierless mountain terrain.

As we arrive at the grandiose front gate and ascend the driveway, the stateliness of this place, its vastness, becomes more apparent. The 23-strong Ferradura team are waiting outside to meet us: a line of transnational smiles. It’s a personal, familial touch that sets the tone for the next 48 hours.

We’re promptly shown to our room – and what a space: languorous but mindful, Balearic and modern, neutral yet inspiring. Two superking beds – on one lies a Steiff whale, a gift for Coco, and a needlessly beautiful touch that, as we’re starting to learn, will typify the above-and-beyond mindset that the team prides itself on.

Floor-to-ceiling windows lead to a veridian garden, ideal for sunbathing, sundowners, even sunrisers. Two bathrooms are elegantly designed and regally marbled, with sizeable walk-in showers and Rituals cosmetics (Happy Buddha is now the shampoo of choice in our guest shower room at home).

We rendezvous back at the bar, where canapés and champagne ­start proceedings (as well they should). There we meet the two other invitees to the island and begin to unravel what each of us is doing in a place usually reserved for top footballers, kajillionaires, and the sparkliest of glitterati.

Shlomo Gabbai, director of the Boutique Hotel Awards, is here on reconnaissance for this year’s industry accolades, while the eminent classic-car photographer Renee Staud is snapping a magazine spread. And me… well, I’m here to write this feature and tick another private island off my bucket list before World War 3 gets underway.

A libation or two later and we’re ready to acquaint ourselves with Ferradura’s 35,000 square-metres. Wherever you go, the 360-view is a constant reminder that you’re on a private island, with the sea sparkling frenetically under the grace of the sun.

Follow the winding path to discover lush, tropical gardens, chiselled palms with draping leaves, neat and vibrant hedgerows and bushes, and a pond rippling with psychedelic fish. A discrete opening gives way to a giant hammock, where you can easily squander the laziest of afternoons, while the rest of the world may as well not exist.

The hammam-style spa is last-days-of-Rome decadent: eastern-inspired pendant lights hang overhead, while a blue hue radiates from beneath the hot hub and cold plunge pool. There’s also a sauna, steam and space for a massage, should you choose to have one here. But you could pick anywhere, including the island’s serene yoga area (a perfect spot to watch sunrise too).

The 23-metre, terrace-level infinity pool gives way to arresting ocean vistas, where boats with flamboyant masts rock gently in the salty breeze. For those with kids, the free-form lagoon pool outside the spa and gym is especially fun. Coco spent an entire afternoon learning to swim, battling inflatable toys and building up an appetite.

Speaking of which, every meal at Ferradura is a fiesta of the highest indulgence: immoderate and unforgettable. Starters of gazpachos, crab cakes, salads, tortillas, crispy kale, halloumi, deep-fried leeks, carpaccio, tartare; entrees of barbequed lobsters, black cod, cote du boeuf; desserts of cheesecake, poached pears, sorbets and ice cream. And it just keeps coming and coming until you wave your serviette in the air, like a little white flag of surrender.

Ulf is a colourful host and raconteur, regaling us with stories about the property’s history, its refurbishment – well, complete reconstruction actually – and its eccentric owner, who sunk millions into updating the island from a kitsch 70s relic (think gold tiles, leopard print and Egyptian paraphernalia). The job took four years to complete, and you can see why. Everything has been mapped and inspected with forensic care: no shortcuts, no savings, just pure overblown luxury.

Of course, Ulf can’t tell us everything – a testament to Ferradura’s commitment to privacy and the team’s what-happens-here-stays-here ethos. But he still recounts some of the bizarre and extravagant requests made by previous guests (anonymously, of course), including rooftop barbeques at 3am, and impromptu post-club parties on the island’s 750-square-metre terrace (complete with bars, pergolas, dance floor and mixing decks).

Nothing, it seems, is off limits.

But that’s the point, isn’t it? Ibiza will always bear the stigma of being that place, where the preoccupation of the summer swarm, be they breadline or billionaire, is to live as hedonistically as possible. The north of the island does its best to temper this, particularly Ferradura: civility in a wild west. The focus here is still excess – just well-mannered and well-moneyed.

But aesthetics and amenities aside, it’s the team’s passion and intuition that makes staying here so exceptional, so effortless, so personal. And like the Steiff whale that now adorns Coco’s bed at home, Ferradura isn’t just about an idyllic getaway, but a gift that stays with you long after you’ve left.

Guests: up to 12 – there’s 1 master suite and 5 double bedrooms (options are available for more guests)

It isn’t very often that a hotel launches in central London and makes such a Conrad Black-sized dent in the hotel hierarchy. 45 Park Lane opened its doors to the usual pomp and ceremony in September 2011. It collected its awards, welcomed its establishment and glitterati clients, and promptly sat down with a cocktail whilst its fans rallied around clapping and fawning uncontrollably. It is most definitely the heir apparent to the top of the London hotel scene. I have been a quiet fan of 45 Park Lane for sometime now. I have coveted her art deco lines and enviable location like a lion stalking a Cartier encrusted gazelle dragging…