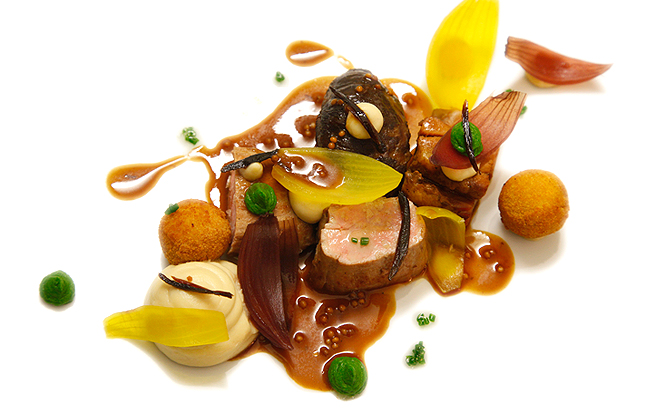 Weinsinn, with its Michelin star and quaint, impossibly French setting amongst the concrete and cash of Frankfurt is a restaurant doing dining so perfectly well, this might make for quite a boring piece…. if Paul was writing it, but it won’t be, as lucky for you, I drew the long straw. And fortunately so, as that very evening we were meant to be flying to the Dolomites for a weekends skiing, but as Paul’s recompense I was instead ushered into Weinsinn, one of the most highly acclaimed restaurants in Frankfurt.

Perhaps explaining its wine list 4 times the thickness of the food menu, Weinsinn initially opened as a wine bar before immediate success as a restaurant, a testament to its head chef, André Rickert. The decor inside is soothing, intimate and tasteful – you could sit on any of the 35 seats and still feel taken in by the walls.

As is agreeably mandatory to all German high-end restaurants, the wine list inevitably involve Sekt and Reisling with the measured quote of precisely how far from where we are sitting they are from. Not that far. Weinsinn is a very slick operation, which is expertly hidden under the warmth and laid back welcome of the owners, husband and wife duo, Matthias and Milica.

Without qualms, we were recommended the tasting menu and after a quick glance around the room to confirm this was the done thing here, we willingly accepted. Through this, we discovered the experimental edge Rickert applies on dishes, which gladly spices up the sometimes standard and formulaic feel tasting menus can have. One of the fish courses had a distinct curry masala base to the foam and was remarkably served, according to Paul, on a bed of four leaf clovers (!).

The other fish dish had a reassuring British feel that did not need the obligatory heap of roe rolling off the pile. Cod was served with peas, mash and, as is always pleasing to me after being made to wear them pinned to my school jumper on St. David’s day during my school years – leeks. Beneath this Home Counties accent I am painfully loyal to my Newport routes. Paul’s big favourite was the beef tartar with a definite glimpse of ginger and soy, although we only realised the Asian slant half way through the course.

We happily feasted our way through the evening, particularly enjoying the expertly made ravioli, which honestly satisfied after our initial dismay at the lonesome single piece, and the always-fulfilling fillet of beef with truffle sauce. The food produced here was boringly faultless, and the wine was plentiful and kept up to its foddered pairings.

Our night concluded a chat with the owners, who proudly rationalised the niche they had filled in Frankfurt’s, and perhaps Germany’s rather stiff restaurant scene. We wound up quite happily reassured that we were not meant to be en route to Italy with over-sized luggage but instead huddled full-tummied, sleepily sharing a licorice cigarette on the restaurant’s patio and flipping a coin on who would get the easy job of story telling the nights gluttony. The tails for Wales never fails.

“Ten years ago, even before the migration crisis dominated the political and media landscape in Europe, I was increasingly interested in ideas around freedom of movement,” says The Drifters Director Benjamin Bond. “I had spent some time in Senegal working on the music concert ‘Africa Live’ for PBS.