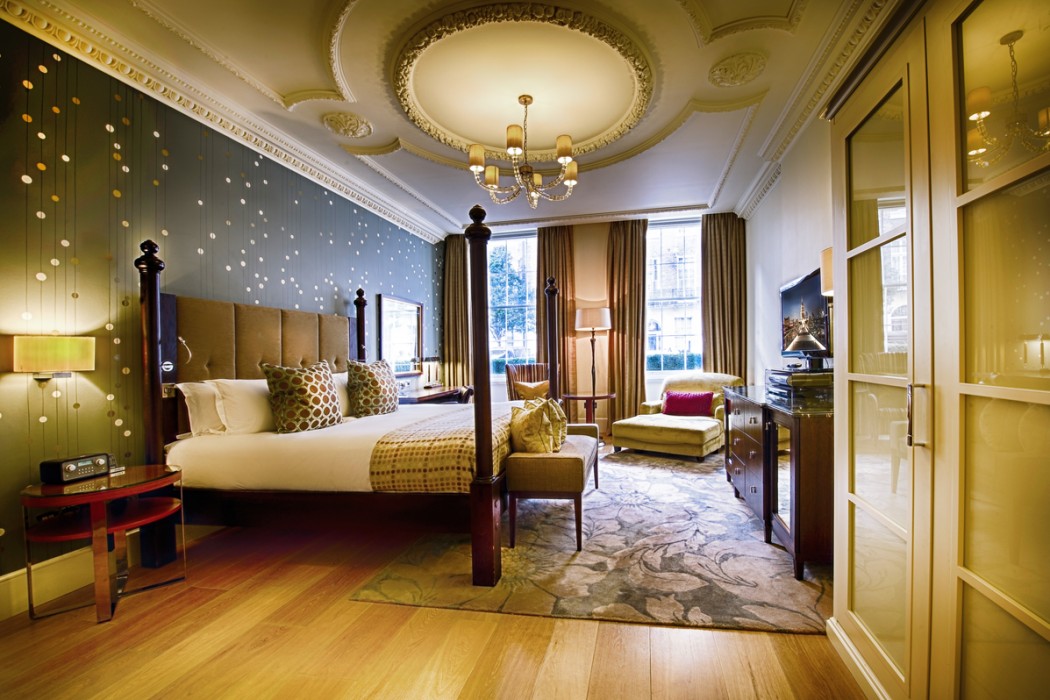 Some years ago, when I was seeking my fortune as a publisher, I stumbled across a property in a leafy part of Paddington. Yes, they exist. It was an altogether minimal affair: the entire ground floor of the interconnected, listed townhouses had been flattened to create a Zen-like reception area, complete with people raking sand.

When I returned on business, not too long ago, it appeared the owners had decided the property was worth more residentially than commercially, and turned the whole place on its head. Luckily this isn’t the sort of thing that happens at The Arch London, one of the few bastions of what I would call a boutique service.

The first thing I want to say is this: people on Trip Advisor (The Arch has an excellent ranking), if you arrive at a hotel and feel uncomfortable because it might be a cut above the rest, perhaps in future you may want to find lodgings elsewhere. My grandmother maintains to this day that the word ‘posh’ is a term she used to use when travelling to and from India. Standing for portside going out, starboard-side coming home. There are many thoughts on where this term came from, but I like to agree that it started in travel. In those days, a tan was not meant for the upper classes (see daytime TV, or indeed anything on music television after 9pm). If you were sporting a tanned complexion, it meant that you were a manual labourer or field worker. The route to India meant that the steam ship would set sail in the afternoon sun on the right or starboard side. Returning from India, the afternoon sun was on the left of port side. This meant a cooler room and, indeed, avoiding the midday sun.

Why the anecdote, you may ask. Well, our opinions of the world around us are inevitably influenced by our elders. My grandmother is a woman of staunch opinions. A well-travelled lady, she always saw the benefits of staying in places that were considered part of the establishment.

The Arch lies a short stroll up Great Cumberland Place, not surprisingly as the crow flies from Marble Arch. The Arch itself was built in 1827, as the formal state entrance to the cour d’honneur of Buckingham Palace. In 1851, it was relocated to its current position on the former site of the Tyburn gallows. I arrived somewhat later than expected, thanks to the Chinese ambassador’s entourage adjacent to Harvey Nichols on the A4. I almost took out a poor gent on a motorbike, entirely my fault, of course, when looking for the hotel. There is something to be said for not splashing your logo onto a 20-foot neon sign, establishment whispers.

I was greeted by a well-dressed doorman, who whisked my car away to an overnight car park on Park Lane, leaving me to ingratiate myself with the reception staff.

The interior is lively yet lavish, the reception area affixed with rows of iMacs, and the lounges filled with contemporary art. It’s a great place to see and be seen, if that particular pastime is your cup of tea. I had grander plans.

The deluxe room on the ground floor was more than enough space for me and an entourage, actually. The bathroom looked like it could host a full BBC make-up team. As always, it’s the little details that count: an actual DVD library, coffee machine, complimentary drinks, and a policy of personally showing guests to their rooms. Having gone through my usual routine of arriving in London and trying to wash off the disdain I have for the atmosphere, my guest had arrived, complete with rucksack and trainers.

Dr Paul Farrow is a lifelong friend: school, college, jobs, marriage, we have seen each other grow as people. As he reaches further into his 30s, we can only hope he develops a penchant for fine tailoring. As a working doctor, he typically arrives in whatever he wore that day and leaves a jumper, headphones or occasionally a shoe in your possession until the next time.

We immediately joked that it might be strange for a male friend to visit a male friend in his hotel room, with the staff knowing that I would only be staying one night. Then we remembered that conservative stereotypes are archaic and we had reservations at Hunter 486, the hotel’s restaurant.

When you have seen London and dined at a wealth of hotels, sometimes you just want to be able to walk down the hallway and into a chair. It had taken me a few hours to get here, so the prospect of slumping into a stiff drink was appealing. I started off by trying the house cocktails. Refreshing, and a welcome distraction on an empty stomach.

Hunter 486 has my kind of ambience: private, quilted leather booths, velvet chairs, and lots of very stylish looking women dining together. Don’t get me wrong, I like the masculine as much as the next man, but I have no fondness of brash City boys and recruitment types drinking their body weight in beaujolais.

The restaurant’s general sense of poised calm was perfect. No more than twenty minutes later and we were knee-deep in a ribeye steak. I presume they either had a Jasper Coal oven, or were individually flame-grilling each piece of perfectly-cooked steak. It was that good.

Arguably, The Arch is a venue for those that like a debonair and central base. City break, shopping, our American cousins flying in for a visit, etc. The service is up together without being too invasive. The hotel has a full turn-down service, concierge and – oh, yes – a gime, no a gyme, sorry, a gym. Whatever that is.

The Arch is my pick for location and service. Boutique doesn’t have to mean self-service. The right balance has been struck – take heed one and all.

The @ferrariuk F8 Spider. Perfect for a week long

“As far as statements of intent go, it doesn’t

Do we need another Hypercar? By @iandigman “Hy

“I was just out of film school, so I was both ov

For this foray into the countryside, there could be only one choice of dining partner: our illustrious publishing director, Gatsby himself, Peter Robinson. This ensured four of the most critical eyes present, and both some great observation and conversation. Arriving in the village of Kirdford, we find ourselves in some disbelief of what we are seeing. We seem to have been transported to a place that bears a startling resemblance to a 70’s episode of The Avengers or Doctor Who. At any moment you expect to hear the whine of John Steed’s 6.5 litre Bentley, as they trundle past the manicured telephone box and Saxon church, on their way to…