It was mid-October and as the nights grew longer so had my studio hours as I prepared for a project referred to only as ‘Pegasus’. Despite the thrice daily secure calls I had set my watch by, I was counting down the weeks until I could emerge from my repressed corporate form and return to something altogether more mercurial. Somewhere between takes in the Soho studio, an invite from Rolls-Royce arrived on my desk titled: Nocturnal Instincts. “Interesting. Are there any more details?” I asked our production assistant. “I’m afraid not until you sign this”. It looked like there might be one more confidential trip before I could lay Pegasus to rest: Ghost Black Badge, a most fitting spectre for this chapter in my year.

I have to admit that after being locked in a TV studio and production suite for two months, I was climbing the soundproof walls a little. Being on one’s absolute best behaviour, acknowledging all rules written and societally regarded, was wearing more than a little thin. The antidote to the banality of modern life? Perhaps an aircraft hanger lined with the latest admission into the Rolls-Royce hall of fame, the Ghost Black Badge. 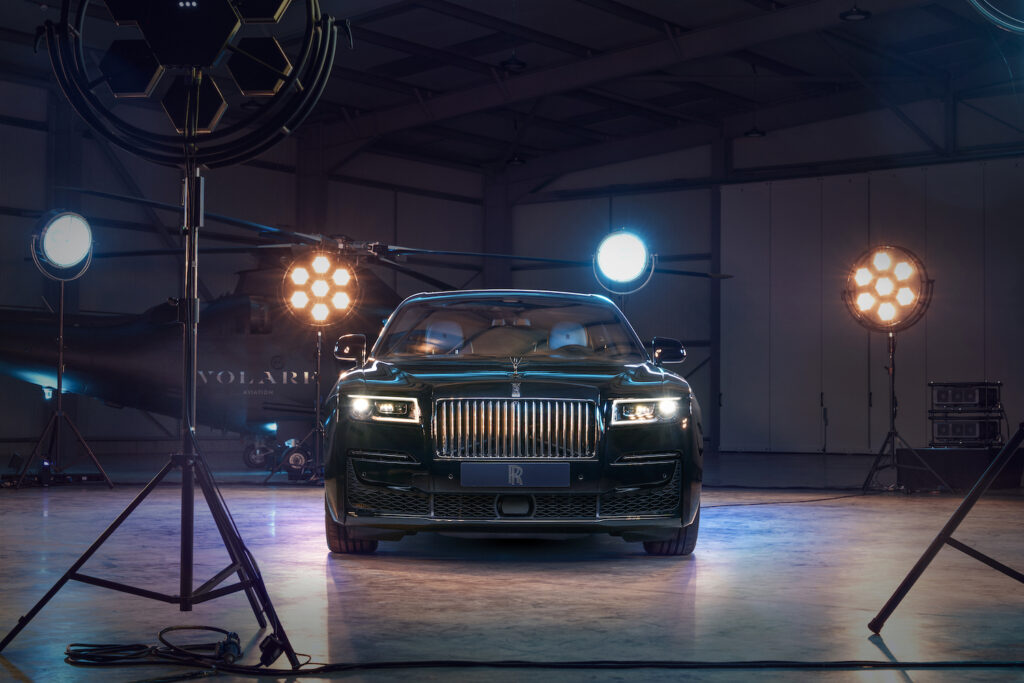 My last engagement with a model from the Black Badge range had been the Cullinan, a muscular incarnation of the brood pushing nearly 2.7 tons to 60 in 4.9 seconds courtesy of a 6.75-litre V12. Did I mention it was iced military green? Certainly a break from convention, but when you consider that almost a third of Rolls-Royce’s clients opt for the darkened aesthetic, it makes sense to pursue this more assertive character.

As I approached the hanger, cosseted in the backseat of a Black Badge Cullinan, it occurred to me that, for the first time in a long time, I had almost no idea what to expect from the evening. All my briefing confirmed is that the launch would be taking place under cover of darkness until late into the night.

Very few organisations set the tone as well as the team heralded by the Spirit of Ecstasy. As I followed the large tunnel towards the light of the hanger, I was met by a senary of Ghost Black Badge, each post opulently specced. Amongst the leviathan of luxury marques stood an Agusta 109E Power and My Tiger Janu. A sizeable white tiger installation by Chila Kumari Singh Burman, made from neon tubes to celebrate the year of the tiger. Given the deft with which Rolls-Royce curates their demeanour in all things, it was as expected, quite the spectacle. Rolls-Royce is, after all, a direct reflection of their customers and Black Badge ever more so. Few brands can confidently argue that they have the closely coveted ear of their clientele as convincingly as Rolls-Royce. It’s this relationship that has helped the brand lower its average customer age to 43 years old. Not to mention the addition of the brand’s dedicated social media and content app for owners. 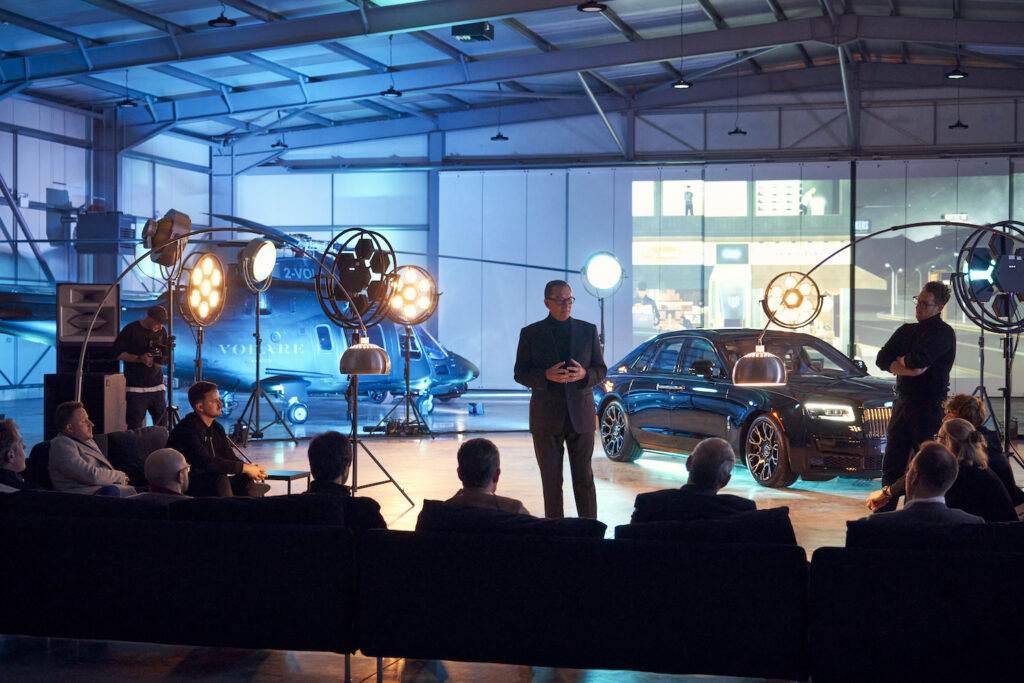 Now, non-alcoholic drinks in hand, we were upstanding to see the latest incarnation of the brand’s evolution. The first thing that struck me was the 21-inch carbon composite corners it was comfortably riding on. Reserved for Black Badge Ghost, the 44 layers of carbon fibre are bonded to a 3D-forged aluminium hub using titanium fasteners. The Black Badge house style has a minimalist design focus that genuinely appeals to me. Surprise. This specs dark and brooding exterior consists of perhaps the industry’s darkest black, weighing in at 45kg of paint. Yes, I know BMW coated an X6 with ultra-black, but you can’t buy one as standard can you. It’s a Steinway finish as expected, but when paired with the blackened brightwork on the Spirit of Ecstacy, badging and accents, it’s a commanding aesthetic. You can opt for any one of 44,000 exterior colours or, of course, your own custom hue. The scala red is quite striking but I think I would probably dial it up to almost verging on ‘blood red’. Do with that what you will. 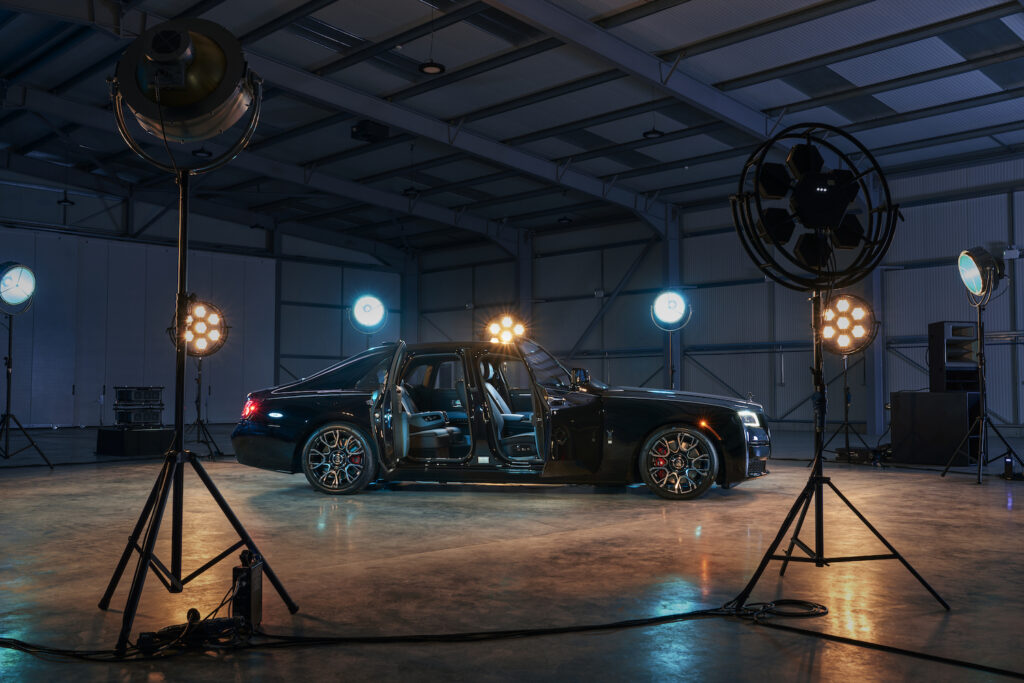 On first glance, the interior is everything we’ve come to expect from Rolls-Royce and more. The starlight headliner, decanters, seat-back TVs and a bespoke interior clock and seats in a punchy aquamarine contrasting leather. That’s ‘turchese’. It’s your choice entirely whether to opt for a black coachline or something more iconoclastic. “Look at that subtle colouring. The tasteful thickness.” The inspiration for the Rolls-Royce ateliers? That of haute couture from the likes of John Varvatos, Alexander McQueen, Yohji Yamamoto and Ann Demeulemeester. Ultimately, the darker aesthetic establishes a strong presence without detracting from the car’s silhouette.

“Black Badge represents a natural evolution for a brand that is defined by a culture of collaboration with its clients,” explains Torsten Müller-Ötvös, Chief Executive Officer. “Black Badge is not a sub-brand. It is an attitude that represents an authentic and confident response to the desires of a new group of clients who proudly practise bold self-expression.” 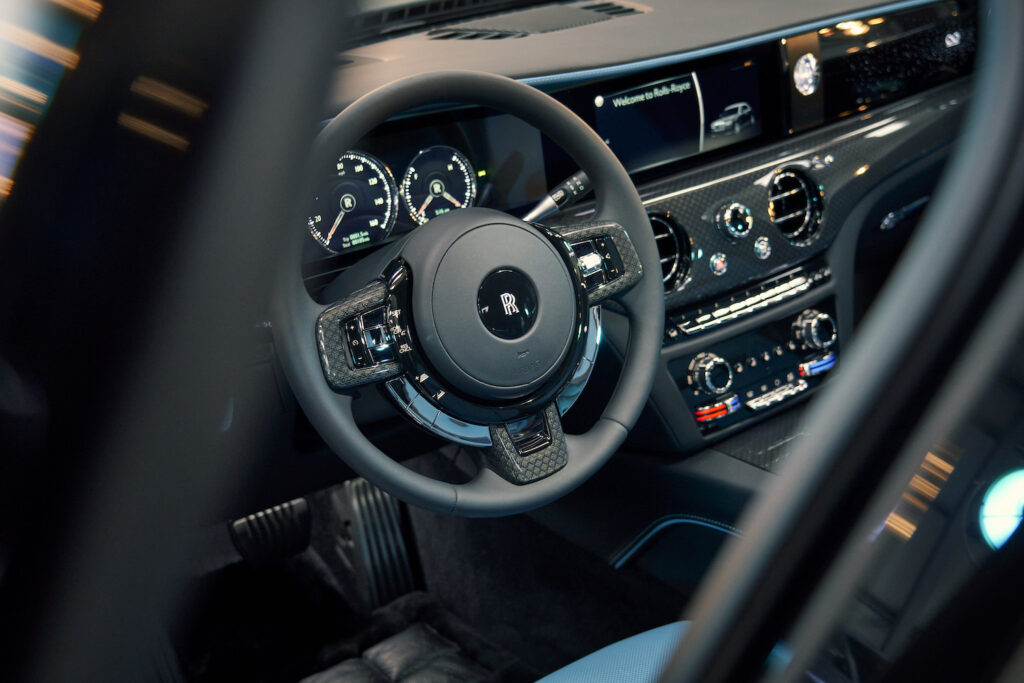 After a group conversation with Rolls-Royce’s Director of Global Communications, Richard Carter, about the origins of the Black Badge range, the hanger doors opened revealing an illuminated runway stretching out to the horizon.

The Ghost Black Badge has, at its heart, the same 6.75-litre V12 prevalent in the rest of the range that draws a balance between out and out performance and, of course, unbridled luxury. However, output has been lifted by 29bhp to 592bhp total over the standard ghost setup. I can assure you that when I was finally instructed to ‘plant thy foot’, the red and green runway markers were indeed a smooth blur by the time we had clocked over 130mph and dropped anchor. That increased maximum torque of 664lb ft is available from 1700rpm with the ‘low’ driving mode sharpening gearshifts and enhancing engine notes for good measure. It’s certainly a more engaging driving experience, without losing that cosseted wafting feeling the brand is so renowned for. Hail the all-aluminium spaceframe architecture. Not to mention the all-four-wheel drive and steer. Cornering feels immediate and decisive which is also down to the fitting of internally pressurised air springs aiding in the reduction of body roll. 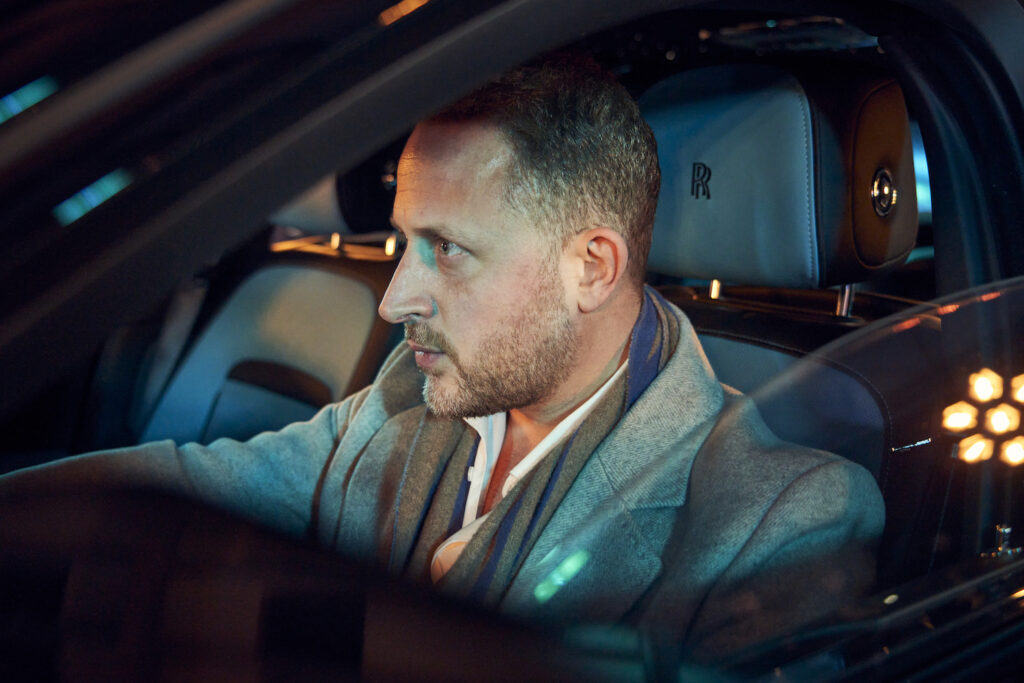 So as the night air began to draw colder and the runway surface cracked slowly under the Ghost’s carbon corners, I made my way to the airfield gates. Our final destination was the Mandrake Hotel, the sort of outfit with a Veronese Bookend marble bed in the penthouse. Seeing is believing, but before we could be distracted, we had another destination. A meeting with the Brotherhood of St. Francis. Hellfire clubs have arguably been around for over 300 years but few were as notorious as that of Sir Francis Dashwood. Dashwood founded and presided over The Order of the Friars of St. Francis of Wycombe. The Friars were rakish well-to-dos who conceived a mock monastic order where they would indulge in making fun of religion, drinking and having considerably indiscriminate sex. In or around 1755, the ‘Monks of Medmenham’, as they were also known, rented an abandoned monastery alongside the Thames, not far from Dashwood’s home estate in West Wycombe. This seemed a rather fitting location to set aside personal driving duties, however enjoyable, and to begin the night with a few libations. 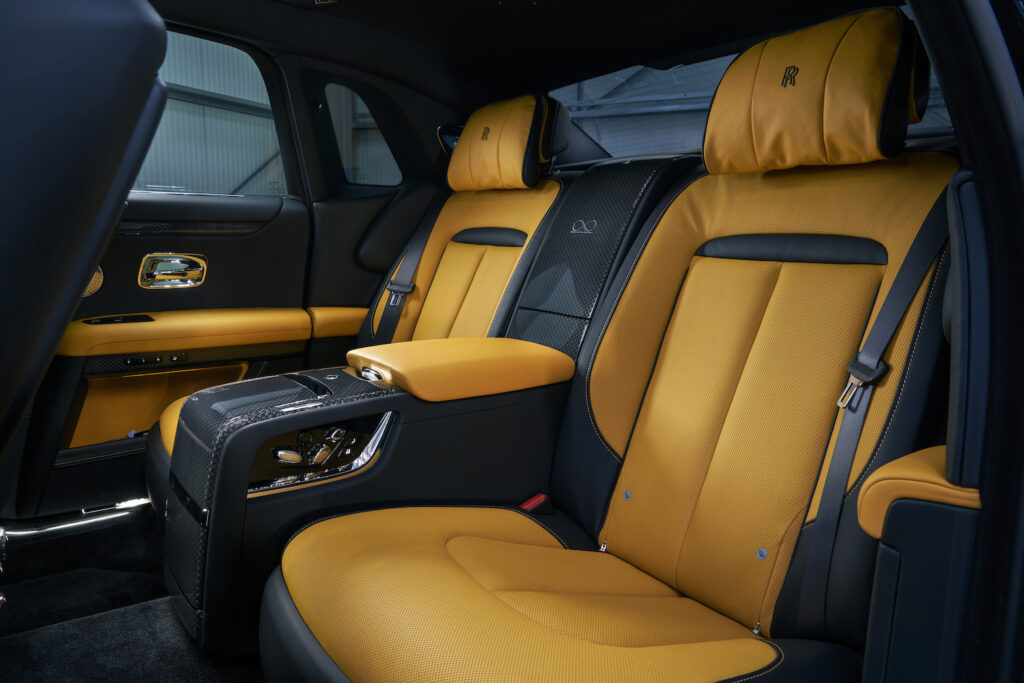 The final stretch into London was by chauffeur, glass in hand of course. The last time I sat down with Peter de Savary, he had a tartan cashmere blanket, a small dog and a well stocked humidor residing on the back seat of his Silver Cloud III. Another reader who shall remain nameless had bench style seats installed in the rear.  Whether you plan to run a Black Badge Ghost as a daily driver or to reside in the rear, it’s a limousine for the times and arguably sets the standard for passenger comfort. “Why does the chiller have two temperature settings?” I asked the chauffeur. “The other setting is for vintage champagne, sir”. Of course it is.

As the clock neared 10:30pm we arrived at The Mandrake, which on first impressions was exactly my particular brand of sultry and suave: a noir feel of extensive cocktails and quiet corners to plot or party; perfect for the iconoclasts that covet the Ghost Black Badge.

All that remained was to take supper in The Mandrake’s private dining room and then into the Waeska bar, late into the night. I believe I clocked out sometime around 2am knowing I would be returned to base in the Cullinan, with the black spirits of ecstasy returned to their lair until our next apparition.

When Cheverolet put the Camaro on sale in September of 1966, the SR-71 Blackbird was flying at Mach 3 over mother Russia, The Beatles were apparently more famous than the son of god and wooden-toothed Walt Disney sadly popped his clogs. The 60s were a time of psychedelic drugs, JFK, civil-rights and a cultural counter revolution; a time that I would be hard pressed not to spin the dial to, if old Doc Brown turned up the in DeLorean. So, whilst America was on its way to a decade of societal change, so was the automotive industry.When Ford released the Mustang in 1964, there was no serious reaction from GM….