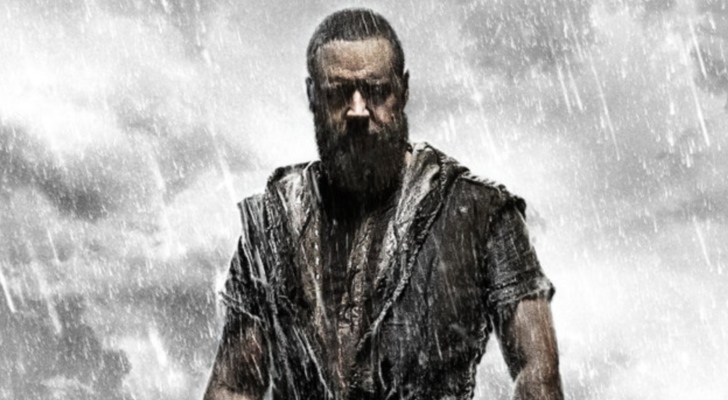 With Noah about to hit the big screen, Alan Diment looks at the religiously-thematic aspects of director Darren Aronofsky’s oeuvre.

2014 will see a raft of films inspired by Biblical tales. Among them will be Son of God, a retelling of the Christ story, and Ridley Scott’s Exodus, with Christian Bale donning his Moses sandals. First, we have Noah, directed by Darren Aronofsky, a lavish version of the Genesis story, dealing with water levels that make the recent floods look like a leaky tap.  Russell Crowe, as Noah, will lead a menagerie of survivors onto his purpose-built ark, including his wife and adopted daughter, played by Jennifer Connelly and Emma Watson. Noah has already experienced some turbulence during production, with the massive ark set built in Oyster Bay, New York, being torn asunder by Hurricane Sandy.

There is around $125 million of Paramount’s money riding on this voyage, so pleasing the sizeable Christian audience in the US is crucial. Preview screenings of Noah, held for Christian groups, have resulted in more grumbling than hallelujahs amongst the congregation. Complainants have said that the film strays too far from its source material. Some even objected to a scene in which Noah gets drunk, even though just such an incident appears in Genesis.

Paramount has reportedly recut the film six times in an attempt to please the evangelical brigade. Now, the studio is to place a disclaimer on the film’s marketing material effectively stating that, although the film is inspired by the Bible, if you want a more faithful account, then you should go and read the Good Book. But the problems do not end there, with the news that Noah has been banned in several Arabic countries for conflicting with Islamic teachings by depicting a messenger of God.

The union of Darren Aronofsky, a stubborn artist with his own uncompromising vision, and a big budget epic was never likely to be straightforward. The director claims to have been obsessed with the story of Noah ever since the age of thirteen, when he used him as the basis for a prize-winning essay. For Aronofsky, the ark builder is the ultimate victim of survivor’s guilt, being saved by God, whilst the rest of humanity (save for Noah’s family) perishes beneath the deluge.

Aronofsky may not have created a film of this scale before, but there are themes found in the Noah story that tie in with the director’s previous work. The central character is driven by a personal obsession (building the ark in this case) whilst attempting to comprehend his role in the vastness of the universe. Then there are the more supernatural elements, which Aronofsky has really gone to town on. Not only are there vast numbers of CGI animals and raging flood waters, but gigantic fallen angels (known as the Nephilim) also make an appearance.

One doubts that the average devoted Christian would have many Aronofsky films in their movie collection, considering the full-on depictions of sex and drug taking involved in several of them. Yet, the work of Darren Aronofsky is shot through with religious allusions and metaphysical concepts that make the director’s foray into Biblical territory seem less of a surprise than one might have imagined.

Darren Aronofsky does not claim to be religious. “I’m Godless,” he once told an interviewer. “And so I’ve had to make my God, and my God is narrative filmmaking.” Born in 1969, into a conservative, Jewish background in Brooklyn, New York, Aronofsky pursued his own brand of faith at Harvard where he took Film Studies and Social Anthropology. Going on to study directing at the American Film Institute, he picked up his first award for his senior thesis film Supermarket Sweep.

In 1998, Aronofsky wrote and directed his first feature, Pi, for a mere $60,000, raised through family and friends. Pi revolves around Max (Sean Gullette), an isolated maths genius, who is striving to uncover a code that governs the universe whilst gradually sliding into madness – until a Hassidic Jewish sect asks him to locate a secret message hidden within the Torah.

What Max actually discovers is the true name of God, written in numerical form, something which has the potential to return the Jewish race to a blissful state of Eden. This knowledge proves too much for his mind to take, and only by forgetting what he has learnt can Max find peace.

A visually astounding nightmare, Pi set the ground rules for Aronofsky’s films. There is his distinctive hip-hop editing style, a pounding music score from Clint Mansell and a role for the actor Mark Margolis, who has appeared in all of the director’s subsequent work. But Pi is also a film that is unafraid to ask some profound questions within its more obvious framework.

In 2000, Aronofsky directed the much admired Requiem for a Dream, based on the cult novel by Hubert Selby Jr. Stylistically, this film went to new extremes, most notably in the speeded up drug-taking sequences, which made the audience feel like they were tripping with the film’s characters. Requiem for a Dream is essentially a horror film about addiction – from smack to prescription drugs to fame and consumerism. Ellen Burstyn stars as an elderly widow desperate to find her place in the world. The chance to appear on a sensationalist TV show seems to offer hope, but instead leads to her becoming hooked on slimming pills and experiencing a psychotic breakdown.

Less obviously religious, there is still a touch of the Old Testament about Requiem for a Dream with each character suffering hideously for their aspirations and weaknesses. The final montage is awfully hard to watch as Burstyn, her junkie son and his friends descend into a relentless Bosch-like hell of degradation and pain that is, in turn, mental, physical and sexual.

Aronofsky’s next self-penned project, The Fountain (2006), proved difficult. The film’s original star, Brad Pitt, walked out during pre-production and the movie’s budget was scaled down as a result. Upon release, The Fountain was deemed a flop, but has been somewhat reappraised since. Perhaps audiences were confused by the film’s triptych structure, which saw Hugh Jackman playing a 15th Century conquistador, a doctor seeking a cure for his wife’s cancer and some sort of monk travelling through space in the company of a tree

The Fountain has several Biblical references. The conquistador is sent on a journey to find the Tree of Life, denied to Adam and Eve after The Fall, which can render immortality. In Genesis, the tree is guarded by a cherub with a flaming sword; in the film, it is a Mayan with a fiery weapon that stands in the way. These Christian beliefs are intertwined with Mayan concepts of rebirth through death, which sees Jackman’s conquistador return to nature by becoming a plant and the monk heading towards a potential new life in the heart of a star. The central message of The Fountain seems to be that we can find happiness by accepting our mortality and that death is itself part of life.

Aronofsky’s last two films are thematically linked, in that they are about two very different forms of performance. In Black Swan (2010), Natalie Portman plays a ballerina who undergoes a sexual awakening after landing the lead in Swan Lake. Freed from her sheltered existence and the possessive hold of her mother, the dancer appears to transform emotionally and physically into the role of the seductive black swan.

Darren Aronofsky did not write the screenplay for Black Swan or indeed its companion piece, The Wrestler (2008), but the latter was his idea. The Wrestler is a thinly veiled Christ analogy, in which Mickey Rourke plays Randy ‘The Ram’ Robinson, a grappler who is at least ten years past his best-before date. Tossing back his long flowing locks, Randy sustains all sorts of damage in the cause of his art, especially in a no-holds barred match where the weapons include barb wire, sheet glass and a staple gun. His wounds could be seen to be stigmatic: a cut to the forehead (which Rourke actually inflicted for the sake of authenticity) and lacerations to his back and torso.

Randy’s best friend, Cassidy, works in the sex industry, as a lap dancer rather than a prostitute, and waxes Biblical as she attends his wounds. “The punishment that brought us peace was upon him and by his wounds we were healed,” she quotes, although her reference point is a film, The Last Temptation of Christ, rather than the Bible itself. Randy, it seems, goes through all his pain on behalf of the baying mob that make up his fan base.  One disabled acolyte approaches him ring side, not to be healed, but instead to offer up his artificial leg as a weapon.

It is questionable as to whether Darren Aronofsky will want to make another Holy epic after his experiences on Noah, and it will be up to the box-office returns as to whether he will be allowed to. But this most original of directors will doubtless continue to explore spiritual, impenetrable and downright out-there ideas in his films yet to come.

It might seem obtuse of me to begin this new column on car restoration with a well-targeted shot across the bow – but nonetheless, I’m taking aim and firing.