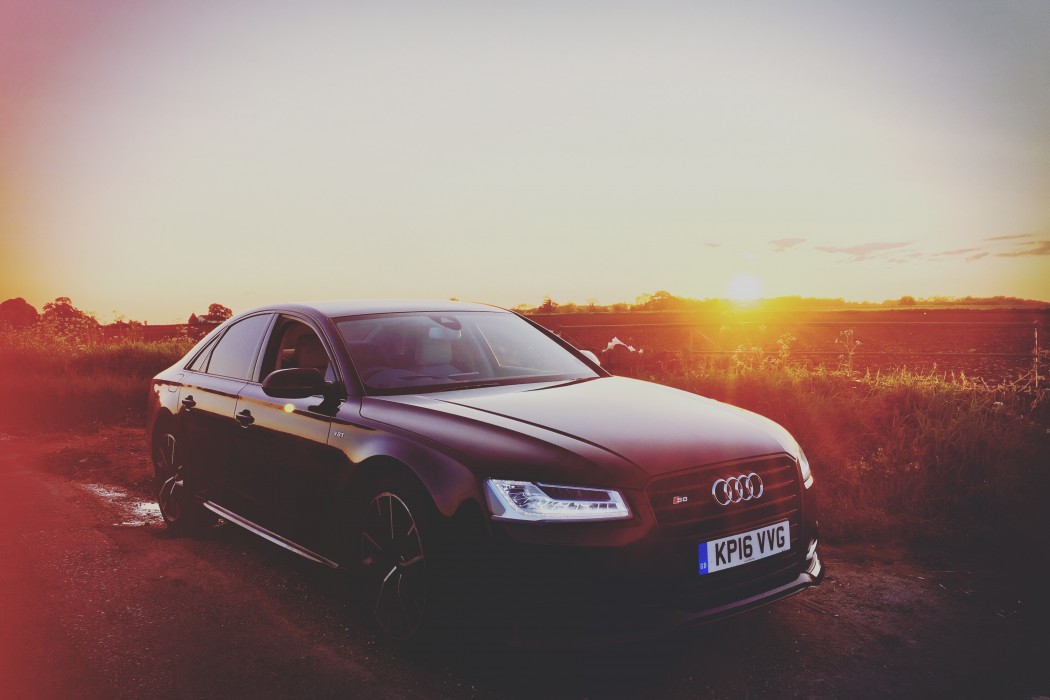 I arrived in the Cotswolds late one evening, to collect The Review’s motoring editor, Oliver Smith. I had driven out to catch the sun set across the fields, as I wafted along to the sounds of Romance by John Barry. For a moment, I experienced a sense of stillness behind the wheel of Audi’s 4.0 litre, 597bhp weapon. This was quickly dispelled by the quad exhaust delivering a guttural raw the likes of which can only be conveyed in a Jerry Bruckheimer film.

I arrived in good time, of course, able to observe the usual pleasantries of drinking coffee, whilst lapping the stationary vehicle and muttering first impressions to ourselves.

With that, our quiet mutterings were stoned to death by the arrival of Laura Ferrier: ‘Looks like a bit like a drug dealer’s car’.

All the diplomacy of a hammer, with the automotive knowledge of someone that prefers horses over horse power.

‘If it’s a drug dealer’s car, they’re the CEO of Pfizer’, Smith fired back. Such a poignant retort. I just stood in silence and raised my eyebrows to convey my accordance with his point.

Laura offered a parry: ‘It’s the wheels and the blacked-out windows’.

‘Which come as standard on most modern luxury marques. Would you want the locals peering into the back seat whilst you are sat in traffic finishing off a merger?’

“Probably not’, Laura muttered (an Audi owner herself, I might hasten to add).

With the usual visual assessment dispensed with, Smith decided it was time to see if the S8 Plus lived up to the hype. The S8 Plus is the understated option in a market swarming to appease those that clamour for an SUV. If you want a luxury 4×4, I recommend giving a makeover to a 110 Defender. If you want a car with a wheel base short enough so that you don’t appear to be the chauffeur, but still have enough power to crush the opposition, I think the S8 Plus fits quite well.

‘Give me road. God, it’s just grabbing, clawing at the tarmac. It should be caged like an animal’.

‘But there is causality to consider,’ he adds, before planting his foot on the brake. The S8 Plus lists a little, whilst I try and control my knee jerk reaction. But nothing noticeable.

‘Physics, Robinson, physics. At over two tons, that’s not bad at all’.

I have to agree with him too. At over 5-metres long, it’s a lot of aluminium to quell and still be sports-car fast.

I jest, the S8 Plus is fitted with more cameras than central London. If you clip it parking, it is very much your own damn fault.

The interior is no slouch either. Audi has a solid reputation of intuitive, rational control layouts. The seat detailing was understated, but every bit deserving of the ‘S’ badge. The gearstick is somewhat reminiscent of Thor’s hammer, though, which pleased me often during the test drive.

So, the S8 Plus is clearly more of an MI6 wet team than a full-frontal assault with a challenger tank regiment. It’s the option for when you want people to know you have ‘made it’, but not cause a strike at the office over pay. Understatement. People, understatement.

During our week together, I did city runs and long Cotswold trips alike. The litmus test, for me, is the whisper assessment. Can I hold a fully effective conversation with a friend or colleague whilst talking in my most dulcet tones on motorway or A-road. Well, when the stereo wasn’t achieving sound-barrier-breaking base, it was all rather pleasant. It’s clearly a car made of two moulds. On one hand, you have the typical pace and muscular driving achieved by a quattro four-wheel drive system. On the other, you have the S8’s limo-like qualities, capable of delivering a team of highly-paid execs to the city in elysian comfort.

I did find myself entirely bewitched when following a rather unremarkable people carrier on a lazy Sunday afternoon, driving west on the M4. It baffles me as to why people must sit in the middle lane, regardless of traffic conditions or their need to maintain a speed of 66 miles per hour. I have a rule of thumb: if you are of an age to have served in a war, then you must be allowed to drive in a mundane fashion across our fair land. If you aren’t, then you should simply know better. You must return to your colleges and schools and tell your educators that you aren’t ready for the real world. Driving in the middle lane on a seemingly empty motorway should be punishable by stoning. There are few things in life which leave me foaming at the mouth, and few solutions once this Jekyll and Hyde transformation has taken effect.

The S8 Plus reminded me that I am an adult, though, a fully-functioning member of polite society, who does not need to harbour such mercurial tendencies toward bad driving. Were it not a gross breach of data protection, I would post the driver’s registration and declare a fitting bounty for their head… lights.

Luckily, though, the S8 delivers a self-satisfying engine note as you pass lesser motoring mortals leaving behind your cares and derision for all that they stand for.

I could now take the opportunity to explain why the good people at Audi decided to launch the S8 Plus. We could compare the competition. We could even consider the standard S8. But let’s be brutally, unequivocally honest: our S8 Plus comes in at £99,055, so it isn’t going to break the bank. It’s a price entirely befitting of the engineering prowess, we can assure you.

My first encounter with a Volvo came in the form of a friend’s mother’s 245, sitting outside her modest home like a trusted family friend. The Volvo 200 series ran from 1974 to 1993, selling over 2.8 million units and becoming ubiquitous with British life in the process. It was overtly safety-conscious; the equivalent of fitting your child with lifelong orange armbands. But the idea that a car represents a certain set of society is becoming rarer as the automotive industry rushes to build as many vehicles with international appeal, using as few distinctive parts as possible. Despite being regarded as decidedly Swedish, fast forward to 2017 and we’ve seen…