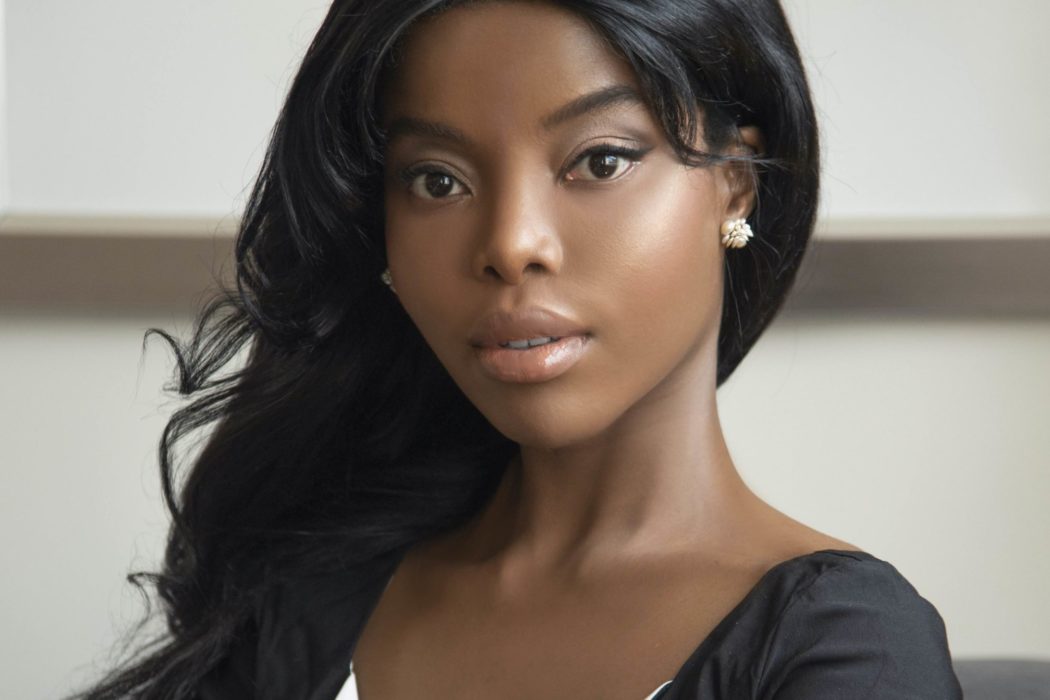 Portia Antonia Alexis is a UN Change Maker nominee, has consulted for Mckinsey, Newton Investment Management, Bank Of America, and analyses the solutions of income inequality. She is an active member of the Department of Economics, and The London School of Economics and Political Science.

What was the inspiration behind your research and business career?

I admit that I didn’t know if my vocation as an economist was born from being exposed to interesting financial conflicts from a young age or if my interest in economics and finance was the sign of an emerging vocation. I decided to choose this speciality, rather than becoming a historian. I understood that it allows you to have a foothold in the world of research and another one in economic policy.

My parents’ education gave me a certain sense of responsibility that goes with the good fortune of being born inside a wealthy family in a rich country. I learned to see the world a little beyond the tip of my nose. All of this certainly influenced my desire to play a useful role in the world.

I decided to go for economic research because it allows me to play a vital role in the equation. I believe that, with the help of my colleagues, we can build a better economic system, a system more oriented towards social issues. This financial system cares about collective interest more than the individual one.

What’s the best lesson you’ve learned as an economist?

I had the privilege to work on several projects from which I could draw several economic lessons. Still, the most remarkable, in my opinion, is to rethink the role of the state in the economy, this lesson came from my profound feeling that the current difficulties offer us a unique opportunity.

At the end of World War II, the welfare state model dominated in most advanced countries. Then, in the 1980s, with Ronald Reagan and Margaret Thatcher, a wave of liberalism and deregulation swept over the developed world. Not everything was negative in this phase, in particular, the emphasis on competition and flexibility in the goods and labour market, which stimulate innovation and economic growth. But the crisis of the past two years has shown the limits of ultra-liberalism. Countries like France, Germany, and the Scandinavian states, with excellent unemployment benefits or social security systems, have stood up better to the shock than the UK and the US, which did not have such automatic stabilisers.

As we hear daily, ‘these are unprecedented times’. Do you have insight into whether we’re headed for a global recession, and what can markets do to rally?

The pandemic has forced many countries to take drastic measures: the suspension of airlines, the closure of malls, bars and restaurants, and the confinement of millions of people, putting a stop to world economic activity.

It is crystal clear and without a single shadow of a doubt that the coronavirus pandemic will cause a global economic recession, which could be more reliable than that observed during the financial crisis of 2008. Still, global economic activity should rebound in 2021.
Many countries have already taken extraordinary budgetary measures to strengthen health systems and protect the workers and businesses concerned. Big economies are in a better position to respond to the crisis, while many emerging markets and low-income countries face significant challenges.

Central banks around the world are taking out the vast arsenal. I am talking here about exceptional measures never seen before: reduction in the key rate, a massive injection of money, purchase of bonds. The markets should stabilise at a stage. Still, everything will depend on the evolution of the pandemic and if world markets will manage to find some sort of balance between supply and demand.

Do you foresee any industry trends that could make a significant impact on society in five years?

To find the most promising industries, we must ask ourselves a question: what are the main problems that humanity must solve in the coming decades? There is one that is very well known: global warming. The key objective is to manage to decarbonise energy sources and, therefore, to live on solar and wind energy, or even tidal. And to do that, we need a precise technology, which does not yet exist. We would need very high-density batteries to be able to store energy.
Another problem to be solved, especially in the western world, is the ageing of the population. There is a whole range of opportunities opened by genomics and predictive medicine, which will make it possible, in the years to come, to have a better life. There are a lot of companies starting up right now.
In the factory of the future, two other promising sectors answer a societal problem. 3D printing, and on the other hand, it’s robotisation. These two technologies will make it possible to repatriate employment and factories in several countries. Except that, if we bring back production, we must produce printers, we must also create robots, we must provide technologies and software in these areas.
Another sector that is unanimous about its growth potential is artificial intelligence. In 5 to 10 years, it will allow us to create other experiences, other ways to behave, different ways to buy, other ways to communicate, other ideas to have fun.

What’s your approach when looking at possible business opportunities or investment?

There’s a variety of investment opportunities on the market that offer attractive returns. It certainly does not make my job of finding profitable and safe investment easier, especially since the financial crises of these years have exposed the fragility of certain types of financing.
Making a profitable investment means that the gains obtained are not only attractive, but I expose myself to too high risks of loss. Therefore, before choosing my investment opportunity, I need to consider the pros and cons carefully. Thus, I must consider the rate of return, the duration of the investment, and especially the level of risk of the financial investment. A criterion like the level of risk is essential insofar as specific, very profitable opportunities can lead to the loss of all the capital invested.
To judge the profitability of an investment, I only focus on the rate of return. I make tax options adapted to the type of savings chosen. Indeed, the tax rate can significantly influence the net gains that investment makes. We will have to be well-informed before getting started. Several investors seek the help of an adviser, which I highly recommend for those who struggle to find the necessary information on their own.

What habits helped make you successful?

Before, I used to let myself be carried away by events, to give up quickly, and to be satisfied with what I had. I thought it was challenging to be able to reach anything in personal/professional life, but I managed to get this out of my head and put the odds in my favour by applying five rules.

First, I set goals and a strategy to achieve them. Objectives are challenges to be met daily. To reach them, the implementation of an action plan, imposing according to the purpose, is necessary.

I never stop believing; I do not listen to parasites. I have heard many times, “It will not work,” “no one will want your product,” “it is useless”. Tt regularly came from the mouths of those I told my ideas. They are parasites. If I gave them too much importance, they would pollute my mind, whereas you had to believe in me to succeed in what I undertake.

I don’t make excuses for what didn’t work or what I didn’t do. I realise that I am the only one responsible for my failures, my abandonments. Looking for excuses is like giving myself a good reason to do nothing, and that’s the worst poison for someone who wants to be a leader.

What role do start-ups play in a ‘complex economy’?

Experts agree that a bad economy is an excellent financial climate for a start-up. Indeed, considering the start-up boom, this may seem to be true. This trend is continuously growing. However, the start-up economy is emerging, now having its market force and spurring a chain of positive effects on the economy.

One of the results of the recession has been an increase in the size of the contingent. Large companies employ fewer people to remain flexible and operate the proportion of large numbers of full-time staff on foot. It means that now, more than ever, finding a job in a large company is extremely difficult, especially for young university graduates.

During this oppressed economy, start-ups provide an opening onto a highly competitive and mostly incomprehensible job market. Thousands of small businesses, which employ thousands of self-employed and skilled graduates, reduce the unemployment rate significantly. Small businesses hire about 30% of the workforce in the United States, for example.

How does competitiveness relate to economic development?

Competitiveness is a broad concept used in multiple ways and multiple contexts. When it comes to countries, competitiveness often refers to the ability to trade and integrate into world markets. It therefore assumes that a given country has a enough tools and industrial sectors capable of completing it.

Improving the competitiveness of the economy is essential to boost growth and economic development, create jobs, and enable citizens and businesses to reach their full potential.
Human capital appears as a first factor allowing gaining competitiveness. The second is innovation.

The more competitive a market, the more companies are led to produce better products, to innovate and to outdo themselves. In this way, we revive the economy; we create jobs; the households’ income increases in parallel with consumption. We inject money into the economy and all stakeholders benefit: state, businesses, banks, employees.

What do you want your legacy to be as an economist?

In my dreams, I would like people to remember me as one of the women who reopened the debate on the need to find a new economic model that is more focused on the social side than financial gains. And maybe with a little luck and the right people to support the decision, I could even be part of those who created this model.

The growth model based on globalisation and financialisation will have to be corrected, and the trend towards a more sustainable economy will accelerate. The confrontation for hegemony between the United States and China had already opened a debate which has just rekindled the disruption of supply chains that have been victims in this crisis of many industrial sectors, such as pharmacy and automotive, who will have to learn to produce differently.

We will have to reinvent globalization. It will not disappear, but it will undoubtedly be more nuanced with more regionalisation, redesigned production chains, and less tense inventory management, which will have substantial impacts on the management of companies.

Goudhurst. I couldn’t even pronounce it properly, let alone find it on the map. But this is where Gemma, the other half, decided to bring us for my birthday. We’ve been scouting villages around London, making a shortlist of places that are charming enough to call home—you know, buy a house, get nestled, and eventually fire out some little ones. So this was as much a reconnaissance as a celebration. One of the great, incontrovertible truths about England is that, deep down, we’d all rather be in the countryside. If you don’t feel it now, you will. The English weren’t built for the city and its Faustian promises. We’re too…