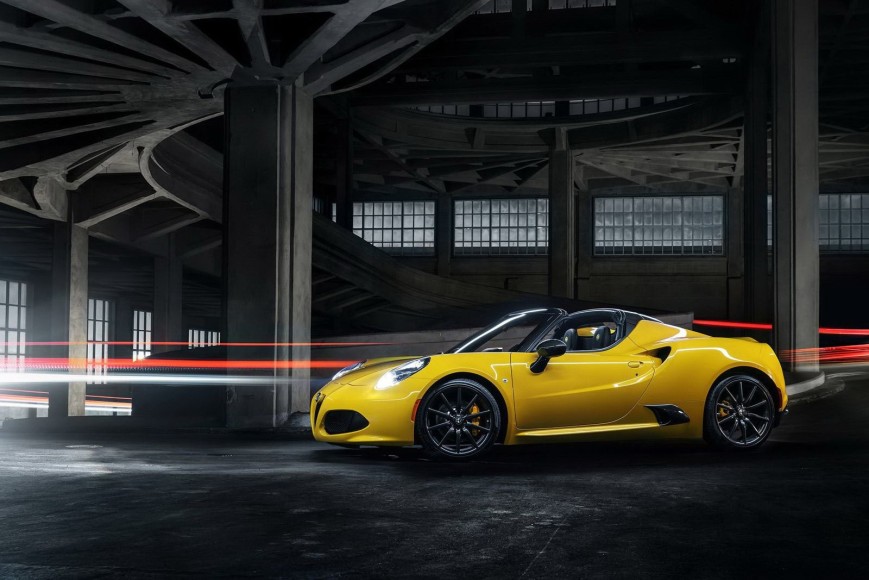 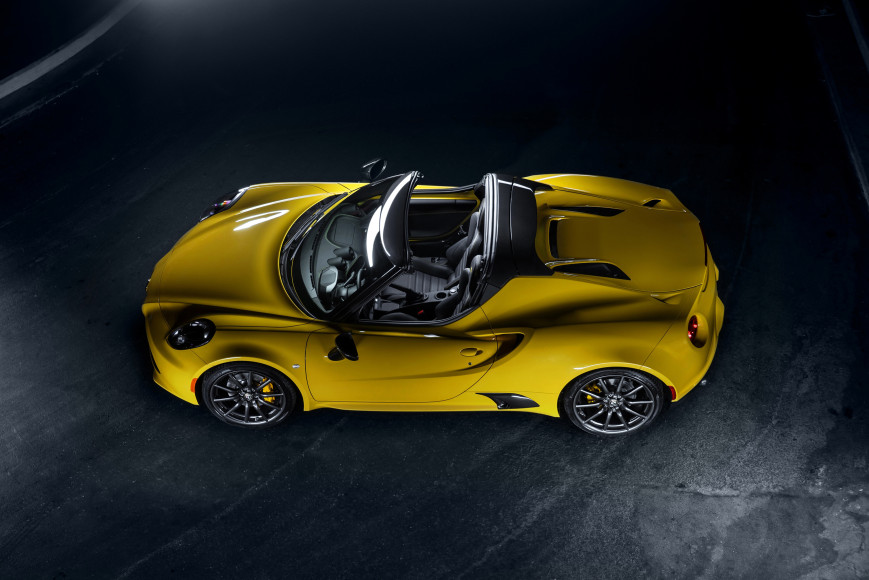 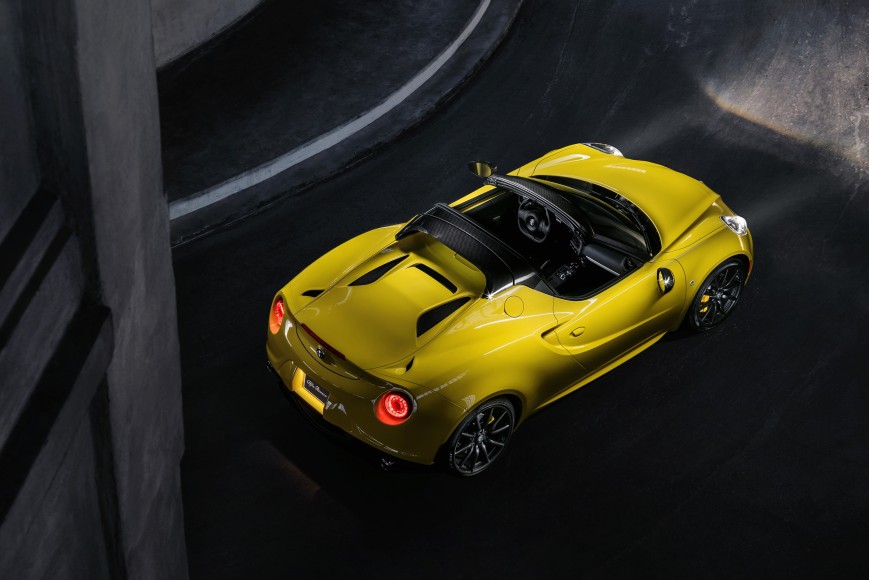 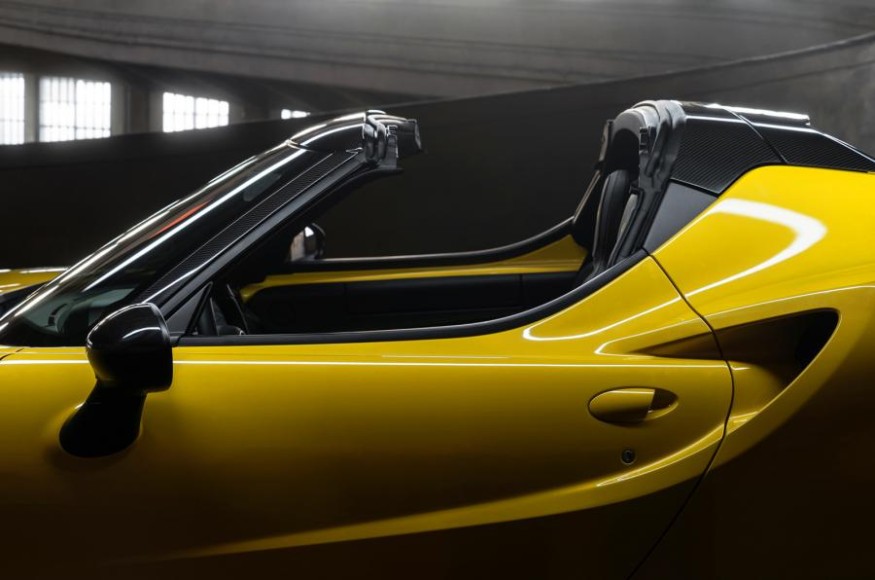 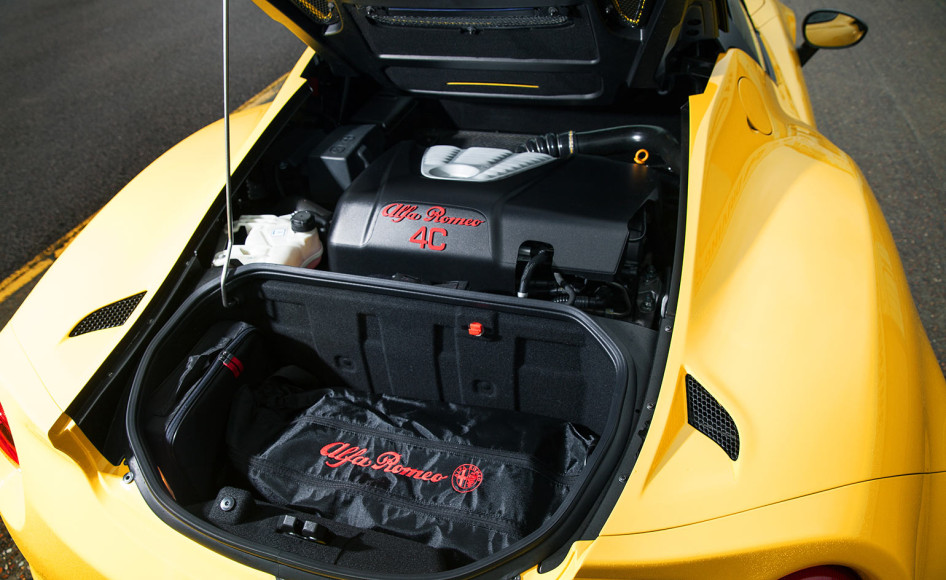 The dream of al fresco motoring in an Italian sports car is arguably something that lives deep inside the psyche of every bona fide driver. Picture the scene: you sit bathing in Tuscan sunlight outside a bar on the Piazza Garibaldi. The glowing white marble ostentatiously matches your white chinos, complemented by your Fairfax and Favour suede loafers. Caterina Murino gently brushes your shoulder as she brings you a freshly poured espresso, powerful enough to rouse even the most content debutant. She leans and whispers into your ear, “Andiamo a casa per poche ore e guardiamo il tramonto dalla camera da letto.” You slink over to your Alfa Romeo 4C Spider, which has already drawn a small crowd of faithful Italian fanatics. Caterina smiles at you knowingly as the sun glints through her hair and you feather the throttle just enough to hear that satisfying crackle from the 237 bhp, mid-mounted, 1.75 litre turbocharged engine.

Sadly, this is not Tuscany, but the South West of England in an altogether wetter time of year.

My hopes of al fresco motoring in England are almost always dashed by a downpour of biblical proportions, so I hadn’t made any specific plans for my time with the 4C and honestly had little idea of what to expect.

First impressions count. Don’t judge a book by its cover. Whatever idiom you choose to live by, the Alfa Romeo 4C Spider looks like it’s been carved from marble by Phidias. Its beauty is self-assured, because it knows you want to take it out for dinner and dancing. Perhaps more.

Given its first intake of fresh air at the 2014 Geneva Motor Show, the Spider version of the 4C had been in development, standing in the shadow of its concept brethren since 2011. The power plant has remained the same as the coupe, a turbo-charged, 1.75-litre, four-cylinder rated at 240 bhp. Weighing in at a mere 940 kg dry, (add 58 kg for Caterina Murino, 80 kg for me and perhaps a few litres of Taittinger), the 4C spider is a featherweight. The power-to-weight ratio should leave you fearful of wanton destruction at every corner. Luckily, I had just returned from a ten-day sojourn, so perhaps wasn’t as prepared to face the 4C Spider as some of my learned colleagues.

Two things that struck me upside the face, like a malcontent Head of Year: the 4C has only two peddles and no power steering. These two bastions of tradition and modernity are, of course, in violent collision. I like to exercise my left leg as much as the next man, but perhaps not as much as the petrolheads of my generation. This is very much a horses-for-courses situation. Rolls Royce Wraith? Sure. The less I have to do, the better. Let the luxo land yacht all but drive itself. Two-seater Italian sports car with manual steering and a monocoque carbon-fibre chassis? Let me get my race boots. The dual clutch automatic isn’t a deal breaker, but there is a notable amount of turbo lag in D, N and A. This is the Alfa Romeo’s control system and with the right amount of adjustment you can wrench control back from the Italians onto your terms.

Having spent an overnight stay in Fernham, in the Vale of White Horse, I was becoming increasingly late for a meeting with Oliver Smith, this magazine’s motoring editor. A man so hell-bent on eradicating tardiness, he was as unlikely to move from his position as a French man living next to a brothel.

I had left Fernham in good time that Saturday morning, but encountered significant traffic outside of Swindon. I evaluated my options. Logistically, the only other way from here to the Smith compound involved a gamble that could increase my arrival time a further 30 minutes. I decided that this traffic jam was the mountain I would die on and set in for the long wait, giving me time to cover some of the more obvious points on the 4C.

The bright yellow paint work with contrasting carbon fibre detailing and yellow leather stitching on the seats is a triumph, and refreshing from the usual supercar colour paint-by-numbers. The 4C is buxom and elegant yet hunkered and strong, a raging bull in a Hermes sports jacket. It draws on elements of Alfa Romeo’s history, but also nods to its performance future in a single mile.

As I adjust the stereo to play something a little more sitting-in-traffic-friendly, I wonder why an Alpina stereo has been shoehorned into the dash. It is high time a bespoke arrangement was made with the Italian car maker and an audio partner of provenance.

As I rolled towards a blind bend on the A420, I could finally see the temporary traffic lights up ahead. The temptation to switch into race mode in anticipation of finally moving a few miles was palpable. However, knowledge of the Gablecross Police station, at the start of the road, gave me reason to remain in adult mode.

A short while later, I had managed to make it across town in record time, thanks largely to the 4C’s racing mode. Take note: Dynamic will give you the full red-alert dashboard, increased throttle response, and an altogether more stiff marque. Natural mode won’t allow you to take liberties, but the car will still look after you, and all-weather will ensure you are sensitively coddled to sleep. What none of these modes will do, though, is save you from the 4C’s standard driving requirements. It is a challenge to drive quickly. At some points I had very little idea of where the car was pointing. I tried in vain to get to grips and feel at one with the car, or at least to some level where I could anticipate what it would do in given road conditions. As I came out of the Blagrove roundabout, approaching the M4 junction in the wet, the 4C decided I was taking liberties and spat me out with more than a little rear end shift. As I wrestled the Italian’s flared nostrils into submission, I was left feeling energised, though acutely aware of how unforgiving this car really is.

Given the weight of the car, its wheel camber and general chassis setup means that it can be a handful to keep on the straight and narrow. It doesn’t take a racing license, but you will need to put your kid gloves on. Trail the breaks, load up the front tyres, and let them bite – you’ll be fine. Luckily its weight is also its saving grace, so if you find yourself Armco-bound, you should be able to stop proceedings pretty sharpish.

As I pulled onto the M4, my Tuscan summer day was caught short by a sudden downpour. The 4C’s roof can be clipped back into place solo with only a modicum of fuss. I decided, however, that I was still too late to justify wasting time with the roof and opted to outrace the rain. This can sometimes be effective, but sadly, on this occasion, it wasn’t. Spritzed and late, I arrived at the Smith residence in full-blown apology mode, almost genuflecting. Like a gentleman, he quickly mumbled for me to forget about it, and confirmed that the drinks would be mine to cover. Cotswold civility at its finest.

The Alfa Romeo 4C is a driver’s car in every sense of the overused term. We all want to be put back into a position of control, fundamentally, to be able to make the throttle, steering and breaking choices for ourselves and decide our own fate. With DNA disabled and race mode in full swing, the 4C comes alive like a wild animal. It will ultimately push you to be a better driver or crush you and hide your body. To the victor the spoils. Andiamo.

The world of classic and vintage cars has seen a boom over the last 10 years – and with that, so have the events related to these ageing works of art. Pebble Beach in California, Villa d’Este in Como, and now Salon Privé on the outskirts of London. Going from strength to strength, ‘England’s answer’ is now based at Syon Park after a spell at the Hurlingham club. The mastermind brothers behind this event are David and Andrew Bagley. They’ve taken the format and really established it in the motoring world, not only for securing the attendance of some of the world’s rarest and most interesting classic and vintage cars,…