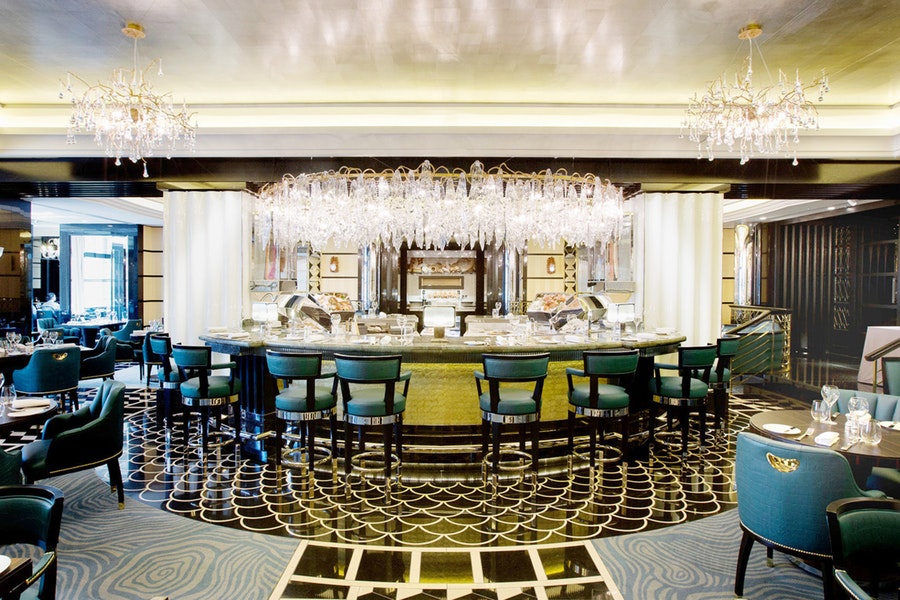 For the longest time, The Savoy has eluded me. I’ve passed its decorated facade on many occasions, but for some reason, its heavily recessed entrance has never drawn me in. In its defence, I am incredibly hard to market to; a wolf in wolf’s clothing.

Built in 1889 by impresario Richard D’Oyly Carte and acquired by Prince Alwaleed bin Talal bin Adbulaziz al-Saud in 2005, the two proprietors couldn’t be further apart on the cultural spectrum. D’Oyly commissioning Gilbert and Sullivan to pen HMS. Pinafore for the Savoy Theatre, and the Prince being a devout lover of comic opera – especially The Mikado, I am sure.

I was in attendance that brisk November morning to meet with the producer of a new automotive YouTube channel. The Savoy is not typically a location where I would consider hosting a working lunch though – but then again, my judgement of what constitutes a ‘working’ lunch arguably differs from most.

“Do I have to dress smartly, as in smarter than normal work clothes”? she asked.

“I’ll wear something smart-casual, but I don’t think the dress code is particularly militant. What would you usually wear to a work meeting?”

“Do it, you know the drill. There will be people there who are so loaded they will look like they’ve covered themselves in glue and run through Oxfam. Then there will be people who are out for a day trip dressed like faux royalty, dripping in enough luxury goods to keep a sea of child workers busy for a year”.

Pulling punches is not something in my cultural lexicon. The clientele of central London’s elite hotel properties is a rapidly shifting dichotomy after all.

I was greeted on arrival at 1130 by a Lego takeover of the iconic Savoy sign. The Savoy is part of Lego Group’s biggest-ever global brand campaign, Rebuild the World, inspiring the Gen P to champion the importance of creativity as a key 21st-century skill. I shan’t argue. I was an ardent Lego architect right up until I discovered the opposite sex.

The lobby of the hotel was adorned with large scale Lego displays in homage to the Twelve Days of Christmas. I happily wandered the corridors, restaurants and meeting areas looking for more Lego installations, whilst taking in the impressive works of Henry Ward and Stuart McAlpine Miller.

The Savoy is uniquely cavernous. It took me most of the morning to get my bearings, having come straight from the American bar, uncharacteristically drinking Earl Grey. With the the more weighty subjects out of the way (like filming budgets and locations), we sauntered down to the hotel’s seafood restaurant, Kaspars. You’ll find it down the main staircase, through the Thames Foyer, beyond the glass-domed atrium. Perhaps leave a trail of blinis.

The name Kaspars takes a little explaining: to the modern diner, the fear of having 13 guests might well fall on deaf ears. In 1898, South African mining magnate Woolf Joel hosted a dinner at the hotel for 13 guests. He formally rebuked the superstitious idea that the first guest to leave the table would endure any bad luck, and to prove his point, left first. Upon arriving in Johannesburg, he was promptly shot dead. Presumably by Lieutenant Gonville Bromhead brandishing a Webley Mark VI.

Such was the superstition at The Savoy that they vowed never to allow a table of 13 diners to sit ever again. They even went to the trouble of seating a waiter at any table unlucky enough to have the magic number. This proved to be more than a little problematic, for both the hotel and dining party, and made clandestine conversations rather tricky. Though, in all fairness, better safe than dead.

The solution to this rather obscure problem came in the form of British Architect Basil Ionides, who was incidentally the grandson of the Greek ambassador, and more importantly a fellow of the Royal Institute of British Architects. Having been commissioned to redecorate the hotel’s private dining rooms in 1927, he crafted an ornate 2ft high black cat from a London plane tree. ‘Kaspar’ was to become the fourteenth guest at all future private dinners, where the great and the good could only muster thirteen.

But, for a moment, let’s consider the fact that for almost thirty years the hotel had a member of the restaurant team join any dinner party with 13 guests. Presumably, this was an option that could be politely refused. The joys that Pascal, the front of house manager, must have had sitting down to eat vichyssoise with a grieving family or roast lamb attached to a group of politicians.

It’s not entirely impossible. Churchill was known to frequent The Savoy. Well, anywhere with a bar and a humidor, really. Kaspar even made it out on a couple of evening manoeuvres. Once with 609 Squadron who, having spent the evening talking of daring-do, were totally blitzed and took him a prize. Well, crimes of passion and war are forgivable, surely.

Kaspar took up honorary membership during world war two and made lodgings at their Lincolnshire barracks for some time, until he was returned to his posting by an air commodore. So, if you have the luck to know 12 people you can stomach for five courses, you can have Kaspar join you, napkin forever hanging around his mendicant neck. Why Kaspar? Why a black cat? Why the gypsy suspicion to dining in groups of 13? I do not know.

Despite my itinerant ramblings, I was slowly making my way to the restaurant, I assure you. 1889 and all that.

I should point out: the restaurant is open seven days a week from 0700 to 2300. I have my own take on all-encompassing serving hours, but I think we’ll move onto the starter.

It is a seafood restaurant after all, so start as you mean to go on. Joost Bijster, the head chef, has been heading up the table since July 2019 and he and his team “showcase contemporary seasonal dishes from land and sea that capture the vibrancy of the natural landscape”. When the dish arrived, I couldn’t help but notice the scarcity of crab. My carnivorous aquatic fear was short-lived. Under a light and rich layer of what I can only assume is more sustainable avruga caviar was a plump layer of Cornish crab. Having prepared the dish myself, in one way or another over the years, I salute any kitchen team with the patience. The three droplets of a lemon reduction atop the avruga in the open tin gave the dish a nice lift of acidity with a charred lemon edge. It was a miniature triumph, of course. The Louis Roederer premier was also adding a lot to the proceedings. You can gorge on champagne during almost any meal, but it always seems rather fitting with seafood.

I shouldn’t really name a challenger here, but my current favourite crustacean based broth comes from Wilks Restaurant in Redland, Bristol. The standard, if we can call it that, was set in 2012 shortly before the head chef was awarded his first star. So, we’ll say the bar was high. Be prepared to embrace a little pomp and ceremony. The east-meets-west tom yum-infused bisque arrived as if being released from a giant glass terrarium. Wafts of comanche-grade smoke filled the booth with a pleasing aroma that served as a culinary prologue. This is the Savoy after all; what’s life without a little theatre. This is certainly a well-conceived dish that balances the weighty west with the equally well-spiced east. It’s what New York Matinee would call “a playful but mysterious little dish”. The accompaniment for the ensemble cast was a Sonoma County chardonnay that went down all too well as the second act to a bottle of Ruinart blanc de blancs.

By this stage, I was starting to feel rather salubrious, and my dining partner and I agreed to share a pudding rather than dive headfirst into a cheese course which was certainly vigorously debated.

Not only was it plated in a way that confirms my suspicions that there might well be a god, but it tasted as if prepared by the divine. Paired with a dessert wine, the name of which escapes me, but chosen by the sommelier, as well as a double espresso, I was content.

All that was left was to lament those dishes that had gone untried. The beluga, the Irish oysters, the Aberdeen Angus tataki, the Dover sole. Gone, but not forgotten. So, whether you’re visiting as a city type or seasoned tourist, find your way to The Savoy, preferably by black cab. Then immediately convene a group of your nearest and dearest 12 friends and sit down to dine in Pinafore. The Other Club has been meeting there since their first dinner in 1911. If you know, you know.

Top Dishes of the Year

I’ve never given anything ten out of ten. Not food, not sex, not a book, not a film, not an album, and certainly not a restaurant. Imagine the existential impasse, the cultural cul-de-sac of grading things immaculately.  What would be left, except to die the perfect death? To me, nine out of ten is the highest possible accolade. If you get a nine, that’s an idiot’s ten. But don’t be fooled – it’s still not perfect. Perfection can only be judged once you’ve tried everything else. When I’m on my deathbed, only then will I go back and revise all the eights and nines, because only then will I have…