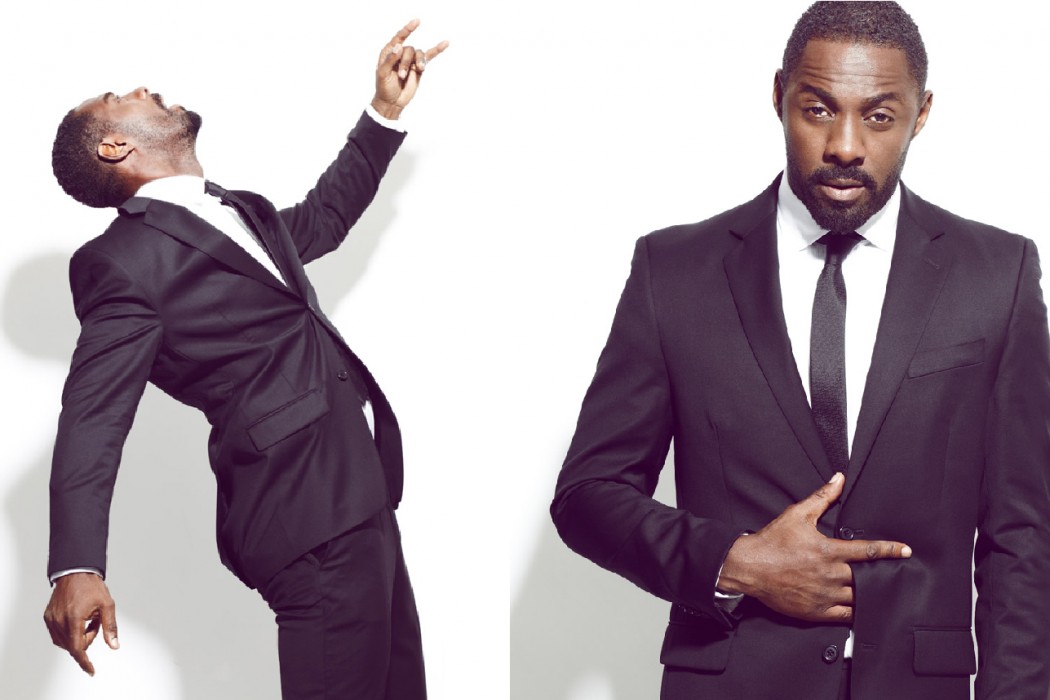 For a thespian known for his fierce roles, namely as street-wise drug-ring leader Stringer Bell on The Wire, Idris Elba is wacky and self-deprecating in person. Whilst knocking back a peppermint tea, he explains that he’s a skilled tap dancer, although has no plans to ever appear on Strictly Come Dancing. “No. There it is,” he says. “It’s a guilty pleasure to watch it”.

It’s the first in a line of anomalies about the man, who was born in Hackney, London, in 1972. For instance, despite his acting pedigree, Elba is quite indiscriminate in his viewing habits. He may have won a Golden Globe for his role of the fanatical Chief Inspector John Luther on the BBC series Luther, but when he’s back in the UK, he likes indulging in the same bubblegum TV as the rest of us. “I’ve watched Jersey Shore and Geordie Shore and compared the two. Geordie Shore is about kids from Newcastle. It’s very similar to Jersey Shore, but raunchier,” he analyses.

Even Elba’s past in full of surprises. After leaving school in 1988, he won a place in the National Youth Music Theatre, a result of a £1,500 Prince’s Trust grant. Elba then worked various, menial jobs, including work as tyre-fitter and cold-call advertising salesman, to earn money between roles. He even did a stint in Crimewatch murder reconstructions.

His first proper role came as in 1995, on a series called Bramwell, a medical drama set in 1890s England. His subsequent credits include Absolutely Fabulous, Ruth Rendell Mysteries and The Bill. But Elba truly became a household name with his film career, most recently in his celebrated role as the eponymous lead in the biopic Mandela.

It sounds like you had quite a colourful life before breaking into acting. Tell us about the work you did.

I was a bartender. I was a DJ most of the time. I did a little door work. I worked at Carolines comedy club in New York, on the door for a while. I worked at Ford Motor Company at Dagenham, East London, making cars for Ford. I’ve been about, man. Acting is the only thing I’ve wanted to do, so I didn’t do any permanent jobs. I just did odd jobs to keep me in the space where I can audition for stuff.

You must’ve met a lot of funny and famous people working in Carolines?

Yeah, I was there for a year and change. I had a good time working there. I met all the comedians. It’s funny now, because they’re like “Wait a second. Don’t I know you?” I’m like, yeah, I’m the guy at the door. That was me.

Luther really made you a household name with UK audiences. Did you ever expect it to become such a phenomenal hit?

“No, not at all. To be honest, I was concerned – it was a massive risk. Even though I was popular from an American show [HBO’s The Wire], British audiences hadn’t seen me on TV for at least 10 years, so it was a bit of a risk placing me as the lead of the show. I was definitely surprised at how popular it became. It continues to be popular, especially with worldwide audiences – they’re starting to embrace the show in different countries, especially America.”

Why do you think it’s become such a huge hit in the United States?

I think the audacity of the show is what really appeals to Americans, and seeing it come from the English, who typically do more tailored TV. Luther plays like an American show but with English characters, and I think that’s part of its appeal there. They’re not seeing stiff upper lip TV, they’re seeing this ballsy six-foot tall black guy kick some arse!

Talking of kicking arse, you were recently linked the James Bond role, when Naomie Harris claimed you had been in talks with producer Barbara Broccoli.

Thinking back to Mandela, what did you say when they first offered you the part?

It was definitely ‘no thanks’. It didn’t feel like the right time. I’ve got a career to defend, and I want to be around for a while. If I fucked Mandela up, that’d be the end of me. But talking to the director, Justin Chadwick, I realised that, one, it’s a massive honour, and two, it’s an opportunity to do something different from the average biopic.  It was almost an origin story, taking you right back to where he began.

Which aspect of Mandela was it most vital for you to get right?

The voice. If you’re watching a film about Mandela and the voice is wrong, no matter what the guy looks like, you’re going to be turned off. But if it sounds like him you start to forgive how much I don’t look like him!

You even spent the night in a cell on Robben Island, in preparation, right? How did that feel?

It was no fun. They locked me in at about 7:15pm, picked me up at 7:30 the next morning. The security guard left me a cellphone. I opened it, but no fucking signal. And it sounds obvious to say, but there’s no getting out. The guy locks the first gate, asks: “You’re sure you want me to leave? Alright.” Walks about 20 yards, locks a second gate. Another 40 yards, locks a third gate. And I’m thinking ‘fucking hell’. Freedom only becomes sacred when you lose it.

So apparently Mandela liked the film?

He was very excited by it. He saw a little bit of it before he died. I mean, he’s seen himself in films played by different actors, but this film was entirely dedicated to his life story, and he was fascinated by the detail. He was quite close to the project even though he was very ill.

We read somewhere that you relished your role in No Good Deed, as psycho who tortures a family?

Yeah, I have to be careful saying I enjoyed it. Here’s the thing: I just don’t get to play characters like that very often, so it was a nice change for me to play someone that twisted.

How do you get into the mindset of playing a role like that?

The script is what the script is. I wanted to find out from people who create these situations, what’s missing in their lives. You and I may have a conscious stop button, and we know what we’re doing is wrong, but this character [Colin] doesn’t have that. I wanted to research that psychosis to understand the people who are in jail for similar scenarios. My research involved looking into the mentality of someone like Colin, a troubled and anxious man on a mission. There are so many common denominators like their upbringing, neglected at child birth, abused as a child by their mum, dad, or siblings, bullying, and they ended up having these similar personalities and didn’t have a conscious.

Is it these differing, challenging roles that have made you famous worldwide?

I’m not famous, I’m popular. And that popularity is at a fever pitch at the moment. And I’m definitely aware of it. And I’m taking advantage of the opportunities.

In this fast-paced, technologically-bombarded era, we find ourselves switched on from dawn ‘til dusk. It’s becoming even more important to kick-back and unplug regularly to enjoy some clear headspace and remember what it’s like to share precious times with loved ones, connect with our natural world and simply switch off. Add to this the known benefits of taking in the sea air, originally heralded by the Victorians for its health giving properties, and you can head for a coastal retreat that unplugs and recharges you batteries like no other break. The health benefit claims range from improved quality of sleep – due to the sea air, which is charged with…