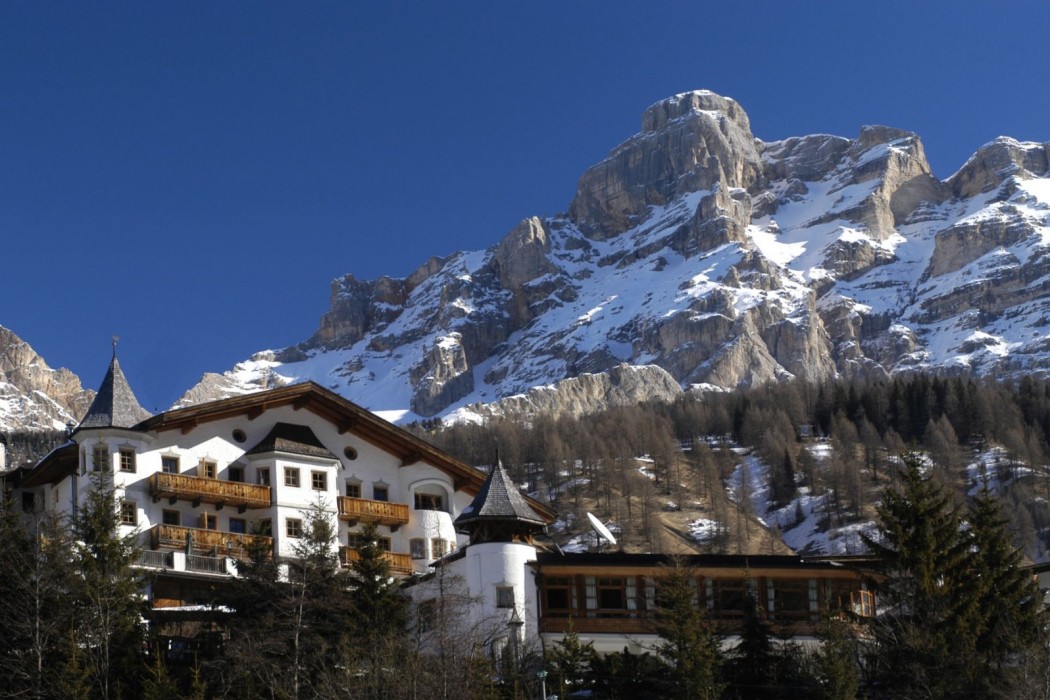 Having skied most of Europe over the past five years, some places twice, it was time that the team headed to pastures pinker.

The Hotel Rosa Alpina resides in San Cassiano in the Dolomites, the epitome of Italian charm. If Peter Sarstedt’s ‘Jet Set’ needs a new bolt hole, San Moritz is out, San Cassiano is in.

The small town of San Cassiano is located at the foot of Mount Lavarela. With a population of under 1000 people, it is a welcome change from the hedonistic attitude and footfall of its more meretricious cousins. We shan’t name names. San Casiano is more of a sybaritic escape for the great, the good and the indomitable ‘foodie’.

New for the resort this season is ‘A Taste For Skiing’ – a showcase for typical South Tyrolean produce. Gourmet dishes, created by Dolomitici and European Michelin-starred chefs, will be on the menu at ten local mountain refuges.

Having driven from Innsbruck airport, we were in need of refreshment on our arrival. The wonderful team at the Rosa Alpina bypassed the usual check-in nonsense and sat us on the terrace for a glass of warm cider and a selection of amuse-bouches from Chef Niederkofler. The atmosphere was serene with Mount Lavarela watching over us, cigar in hand.

Stefania Belle, the hotel resident manager, kindly came out to greet us and ask us if there was anything we needed during out stay with them. Having spent a good few nights at the Rosa Alpina, it became clear that the management team at the hotel got to know every guest personally.

The hotel itself has a timeless charm etched with contemporary accents throughout. If I had to compare the Rosa Alpina to an existing establishment, it would have to be the Mont Cervin in Zermatt. It has a warm family atmosphere that you usually expect from guest houses high in the Alps.

The hotel boasts 51 rooms – all are generously appointed with traditional local antiques and are incredibly spacious.

Dressed for dinner, we were invited to join Norbert in the kitchen for a tasting of his mountain-inspired menu. Norbert explained he was first taught in Germany, then moved through Switzerland, USA, Austria, and then back to Germany. He was trained by chefs Jörg Müller, Eckart Witzigmann and back in Italy by Nadia Santini. Norbert is unflinchingly down to earth. For a man that has reached his lofty position in the Alpine cooking scene, he is gracious and welcoming, even to a group of writers in his busy kitchen. He serves up truffled encasements, the lightest ravioli and traditional local meats to name but a few. The onslaught of Gault Millau food served to an 18.5 rating is vertiginous.

Having met the great man and toured his kitchen, we were politely ushered into the restaurant. I opted to linger behind a moment longer to see what Norbert and his team were plating up at the far end of the kitchen. I watched as they delicately placed each item on the plate and, like artists, painted their canvas in the way only Michelin star restaurants can.

Norbert noticed me briefly and beckoned me over. He signalled for service and whipped one of the purple delicacies out of the pan, handing it to me on a table spoon. It is a revelation. What I first think is a dessert turns out to be beetroot gnocchi served on beer soil with a cream of daikon cress. My eyes rolled back in my head and then came forward with the realisation that I was still in the kitchen and must not fawn too much, for the best was yet to come.

The restaurant is named after St Hubertus, the patron saint of hunters. Fitting, really, given that the restaurant’s menu is based on a project geared towards increasing culinary identity in the region and promoting alpine food culture. Not to mention sustainable agriculture and its social implications. Is it any surprise that, in Italy, such a great importance is put on dining?

The restaurant is alpine-inspired through and through – stag, elk, anything with antlers really, adorn the walls. This penchant for antlers would become an unforgettable fixture later that night. If you have never been to an alpine region and are a bit squeamish about taxidermy, good luck to you by the way.

The majority of the team opted for alpine linchpins, beef tenderloin and suckling pig. I opted to try Norbert’s signature menu, ‘The Mountain Kitchen’.

Highlights were the tartar caviar, which looked like a plated scene from a carnival and tasted divine. The veal tripe did initially concern me. Having never opted to try entrails, I should’ve of known better. They were first class, a gamey texture with a rich taste beyond compare.

The meal was served with a flight from Christian Rainer, the maître d’ and sommelier. Matching wines to a seven-plus course meal is an art. You do run the risk of opting for wines that are too punchy and inebriating the guests. Or going in on the defensive and serving something that is not equal to the food. Christian, however, is worthy of an international accolade.

With the meal drawing to a close, it was time for one final piece of dinner theatre. A dessert flight served on huge antlers. This was Willy Wonker meets alpine tradition: candyfloss, chocolate lollypops, and gin explosions (you will have to see for yourself).

A night well spent in the company of good people and fine food.

This, however, did not make for the most gracious skiing the following morning. We were met in reception by Stefanie from the Alta Badia tourist board, who would kindly guide us that day. The Rosa Alpina staff dutifully take all their guests skis up to the ground floor from the ski room every morning. Heaven forbid you should lift a finger. A minibus then drives you the few hundred yards to the bottom of the slopes.

A short lift up and you are in the Alta Badia ski region with access to the Sella Ronda circuit and 1200km of slopes. The amount of open slopes this time in late March boggles the mind. The Alta Badia region has 53 ski lifts with access to piste for all levels. I am told that this region is popular with families, given the diverse range of skiing. Marco from the Scola De Schi Dolomites joined us that afternoon and showed us that even with blue bird sky. There were still great stretches of firm piste. If you are looking for a guide in the region, it is worth arranging a day with the Ski Dolomites team. In order to fully appreciate the magnitude of this vast ski region, I do (for once) recommend a top ski guide. We also opted to take some snowboarding lessons with them. I definitely got the hang of it and Carlotta was great at lifting my 13-stone frame off the deck, but my ego couldn’t take it for long. It isn’t as easy as it looks.

After a long day of skiing and boarding, there was something comforting about knowing the hotel’s transfer van was a call away. Sure, the walk to the hotel was 5 minutes, but if they were coming anyway, why not. Later that night, we all arrived en masse at the Rosa Alpina Spa for a sauna and a steam, not to mention a host of treatments. Three days really aren’t enough, I assure you.

The hotel also offers a grill option for dining, at its Wine Bar and Grill. Should you want a little more space, there is the glorious Penthouse with its own fireplace, kitchen and chef.

Rosa Alpina has covered all the bases here: two leading restaurants, a fantastic bar, sublime service and a staff that really go out of their way to make you feel at home. Book now for the 2014 season to ensure maximum bragging rights.

The Beauty Passport Goes To Korea – With Kōsame

The Beauty Passport, as a series, was born from a particular passion I indulge when travelling. I deign not to bring home tourist trinkets; photos and memories will do for me. And as much as I enjoy perusing fashion whilst away, I know from experience that falling into the moment with an impulsively-purchased pashmina I’ll never wear again will only frustrate me when unpacking at home. For me, the holy-grail purchases from my travels are the beauty items I can’t get back home (and some of the most treasured times are the moments I spend sneaking off in pursuit of them). The best liquid eyeliner I’ve ever used was from…