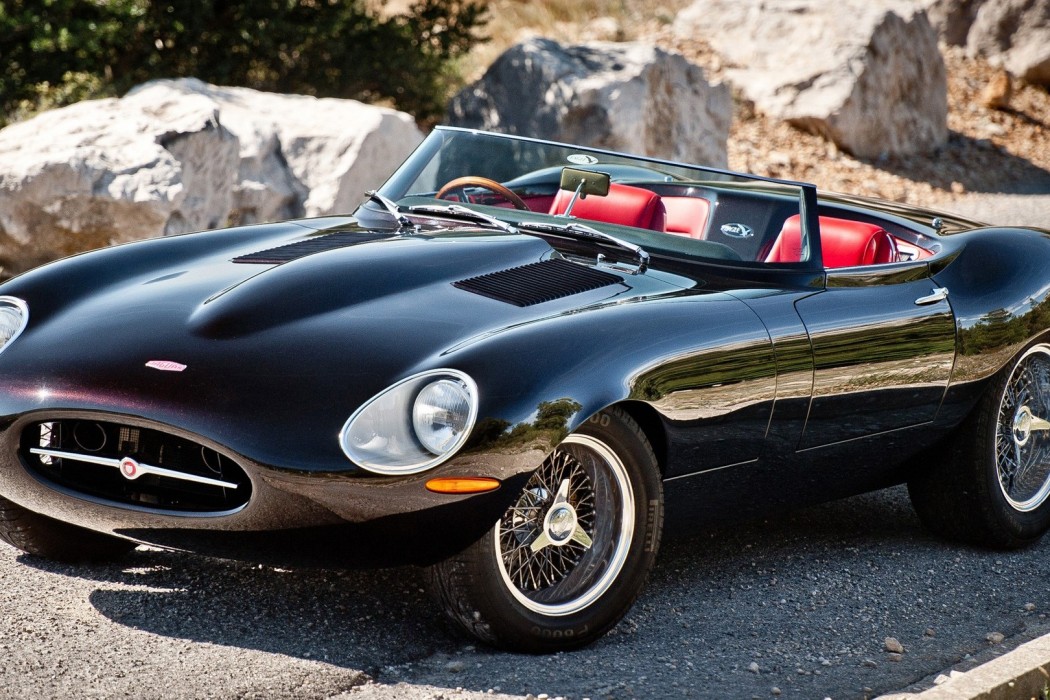 The E-Type was first presented to the world’s press at the Restaurant du Parc des Eaux Vives, in Geneva on 15 March 1961, a launch timed to coincide with the Geneva Motor Show of the same year. Such was the media excitement and clamour for demonstration runs up a nearby hill-climb that Jaguar founder Sir William Lyons instructed chief test driver Norman Dewis to drive through the night to bring another model to Switzerland. Dewis, who was one of the team drivers for the ‘55 Le Mans Team, took eleven hours to drive from Calais to Geneva. Averaging 68mph, across France. On non-motorway roads. In a factory-fresh car. Strewth!

When Enzo Ferrari saw the new Jaguar E-Type, he pronounced it ‘the most beautiful car in the world’, and he was not a man known for his compliments. He so enraged Ferruccio Lamborghini, who complained to Il Commendatore about faults on his Ferrari, that he vowed to make his own cars, and that they would be better than Ferrari’s. And so the Raging Bull arose as a competitor to the Prancing Horse.

The E-Type is the ultimate four-wheeled phallus, an object so sexually charged that, when painted red, it looked like an orgasm on wheels. The styling for this masterpiece had, as usual for Jaguar, been guided by the hand of Sir William Lyons. William Heynes (the engineer in overall charge of the project, and designer of the XK series engines) and Malcolm Sayer (the designer, who had been an aerodynamicist with the Bristol Aircraft Company, and was responsible for the final bodywork form) were jointly responsible for actually putting it into production. It was broadly based on the design of the D-Type, the racing Jaguar that Mike Hawthorn drove to victory in the 1955 Le Mans. The D-Type was based on the C-Type, which was based on the XK120C (Competition); Jaguar were nothing if not prosaic with their model nomenclatures. There were no A or B Types.

Technically, the E-Type was not such a great leap forward, but it did showcase two significant pieces of cutting-edge automotive technology: disc brakes all round and a sub-frame mounted, independent rear suspension set-up that was used on every Jaguar thereafter until the mid-80s.

“Half a century of progress has not diminished the significance of the E-Type,” said Mike O’Driscoll (Managing Director, Jaguar Cars and Chairman, Jaguar Heritage) in 2011 on the occasion of the E-Type’s fiftieth birthday. “It was a sensation when it was launched and remains Jaguar’s most enduring and iconic symbol.” E-Type owners included celebrities such as George Best, Brigitte Bardot, Tony Curtis and Steve McQueen, and it became as synonymous with the Swinging Sixties as the Beatles and the mini skirt.

“It is impossible to overstate the impact the E-Type had when it was unveiled in 1961,” said Ian Callum, Jaguar Design Director. “Here was a car that encapsulated the spirit of the revolutionary era it came to symbolise. The E-Type is a design that, even today, continues to inform the work we do in styling the Jaguars of the future.”

The E-Type’s competitors were either hand-made, foreign, more expensive, or all three – think Aston Martin DB4GT, Ferrari 250GT or Maserati 3500GT. When Autocar tested the 3.8 litre 2+2 in March 1961, it was priced at about £2400. The Aston cost £4084, and the Ferrari and the Maserati cost the same or more, depending upon the specification. Jaguar historian Philip Porter, who runs the E-type Club and owns several examples himself, commented “There’s a huge spread of values from £5000 up to £200,000 – or £1 million for a genuine ally-bodied lightweight racer. For those wishing to have something more individual, Eagle probably represent the peak of the rebuilding companies.”

I had the opportunity of driving a couple of these iconic machines at the end of May, in the company of Paul Brace, General Manager of Eagle Racing, otherwise known as Eagle Jags, and manufacturer of the stunning Eagle Speedster, an all-aluminium bodied, hand-made creation, conservatively priced at £500,000. So, what are they like to drive?

The first was a 1964 Mk1, 3.8 roadster, resplendent in deep-gloss, dark blue paintwork with a parchment leather interior, and fitted with big bore exhausts. Hard acceleration sounded much like Odin standing in the halls of Valhalla, calling across to Mimir, his uncle – in Iceland. It was fast, too. With the same power-to-weight ratio as a modern XKV8, it dispatched queues of traffic with ease, and dealt with corners as if on rails. Brace explained that, in general terms, he doesn’t stray too far from the original spec, so driving aids like ABS and traction control are not fitted. This particular car, however, was retrofitted with a five-speed gearbox, air-conditioning, and a decent stereo and CD player. The other noticeable aspect of the car was the ride comfort. The all independent system, fitted with adjustable dampers, has torsion bars at the front and a sub-frame mounted wishbone system at the rear, is supple and beautifully damped, turning pave surfaces into slight irregularities, and blesses the car with brilliant handling and road-holding.

The Speedster is in another league. The engine is an all-aluminium, 4.7 litre, twin-cam, straight six; 0.5 litres larger, lighter and more powerful than the standard XK 4.2 litre lump, which benefits steering, handling, roadholding and acceleration. The power-to-weight ratio has been improved to the ‘scary fast’ point: at 307 bhp/tonne, it is the same as the Ferrari California! The engine also produces 340lbs/ft of torque, which almost turns motoring into a top-gear-only (sixth) affair. It is achingly beautiful and superbly finished, with some interesting additions to the original bodywork design. It’s de-seamed, the wheel arches are more pronounced, and the rear end finished with the exhausts recessed into the bodywork. The other most important change is that the front and rear tracks are now much wider, giving the car a far better feel, and more assertive stance on the road.

It is blindingly fast and extremely comfortable, with bespoke air-conditioning and electric steering systems that make for cool and easy driving. This particular car was the second made. Any others made will be bespoke for each owner and made only to order. A point here: each car will use an original VIN from a donor chassis, thus retaining its original E-Type identity.

Put up your Dukes

Bored of floating around on the fickle winds of fashion? I think that you need something reliable in your life. As a country boy, I work on the premise of ‘If it’s not in fashion, then it can never be out of fashion’. And I pride myself on my mantra of ‘Tradition, tradition, tradition’. However, contrary to what you may now think, we don’t just wear baggy-arsed red corduroy trousers with turn-ups at half-mast. When not slowly pickling oneself in port for the six months of darkness, the winds of fashion do occasionally blow through the ‘the sticks’. These winds tend to bring variations on tweedy classics and the odd…