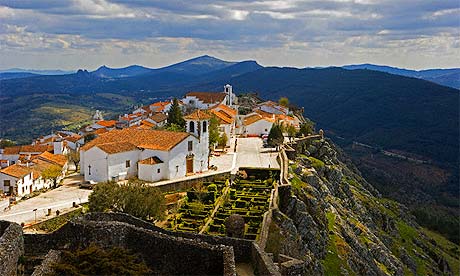 Alentejo is a region that remains unspoiled by other tourists: sparsely populated and baking hot, it is a place that invites you to savour relaxing in spa hotels and on boats, eating Alentejo’s distinct bread dipped in locally produced olive oil from traditional pottery dishes, and drinking the plentiful variety of developing wines. Relax, eat, drink; the building blocks of a perfect break.

Any landscape that achieves nearly three thousand hours of sunlight every year is an impressive alternative to the steel grey sky of the United Kingdom. And the rolling hills of Alentejo are spread liberally with vines, olive trees and cork oak woodland.

The rivers, lakes and beaches provide an ideal setting to soak up many of those 3,000 hours. The manmade Lake Alqueva, on the eastern border with Spain, has 83km of exploration opportunities, with hundreds of little islands to be explored by boat and bicycle and a plethora of watersports on offer. It also connects many of Alentejo’s cultural and historical hotspots, while also safeguarding against the risks of drought.

In the remaining non-sunlight hours of the year, Alqueva’s night sky comes highly recommended; the starlit canopy reflected on the perfectly still waters is a uniquely peaceful experience. The Alqueva area was the first to be given the accolade of ‘Starlight Tourism Destination.’ This can be attributed to the region being sparsely inhabited and therefore largely free of light pollution – while equating to a third of Portugal’s landmass it holds just 5% of the population.

The country’s oldest city – Evora – is the jewel in Alentejo’s crown. UNESCO awarded the ancient settlement World Heritage Site status for its golden age architecture, a Roman Temple from the first century AD, and the Manueline signature nautical ropes that adorn most public buildings. While rebuilding the city in the 1600s, Franciscan monks used the contents of the local graveyards to build the intriguing Capela dos Ossos – a chapel almost entirely constructed from human bones. It stands as a symbol of human equality in death, showing no distinction between races, religions or riches. Alongside these historical monuments, the city has many artisan boutiques, which are full of locally crafted jewellery, clothes, shoes, hand-painted pottery and more products made of cork than one could ever imagine.

The abundance of cork in the region allows for many inventive uses of the material. One of Alentejo’s recent bloom of spa hotels – fittingly named Ecorkhotel – uses it to insulate their modern, minimalist exterior walls and decorate the interior ones, too. Alentejan people joke that you can’t open a new hotel in the region unless it has a spa attached, and there are certainly many to choose from.

L’And vineyard resort is less than an hour from Lisbon airport and provides the perfect antidote to your flight; we had our noses filled with the scent of eucalyptus, our muscles massaged with luxury products and a glass of the local produce in hand, while sat by the outdoor pool, within just a few hours of touchdown – a fast track to relaxation! The resort also offers a uniquely luxurious way to sleep under the stars, with a skylight over the beds, which in summer can be opened to the air.

As soon as you enter Alentejan scenery, the bustle of Lisbon is forgotten; remarkable when you consider the proximity of Evora to the capital. This played a great role in the city’s selection as the favoured hideaway of Portuguese royalty when the plague was ravaging the capital. The Convento de Espinhiero was the monastery in which kings and queens would stay, and it now continues to provide a haven for the wise and wealthy as a five star hotel. In times past, it was the stage on which miracles and curses played out, allegedly altering the course of Portuguese succession. The hotel has fully embraced its history and character, including rooms named after the kings who stayed in them, religious statues in every corner, and a monthly mass in the consecrated 200-seater chapel.

The Moroccan chef’s experimental take on traditional Alentejan cuisine and the hand-harvested olive oil make a meal in Divinus restaurant unmissable. Traditional food in the region revolves around pork and the local speciality of mashed bread – more elegantly referred to as ‘migas.’ For an authentic Alentejan meal, the famous and family-run Fialho is the first restaurant any local will recommend, but the newer Dom Joaquim serves an exquisite dish of traditional pork cheek and chestnuts with a walnut and apple chutney, which still makes my mouth water. For keen or inquisitive amateur chefs, many venues across the region offer cookery lessons, which presents a great opportunity to learn what goes into the food and to take a bit of Alentejo back to the dinner table at home. Or it’s just a good morning’s entertainment.

At Herdade do Esporão ,the restaurant and sun terrace look out across a vast expanse of the winery’s 160 hectares, and the cuisine naturally goes hand-in-hand with the local wine industry. The industry in Alentejo is a young one, but it grows every year, with vineyards experimenting with new blends and developing their existing products continuously. Alentejan white wines can be crisp and fresh or rich and oaky, and many producers are creating rose blends due to high demand. The intense heat creates the ideal environment for smooth red wines of varying complexities and characters but consistent quality. The heat also means the wines pack an ABV punch, and Portuguese authorities have increased the percentage of a bottle of table wine to accommodate the hotter summers of more recent years.

With such a laidback pace to Alentejan life, and such an abundance of ways to relax and revitalise, it is an ideal destination for a sophisticated getaway with friends, a classier kind of hen holiday, or a splash of sunshine for a long weekend.