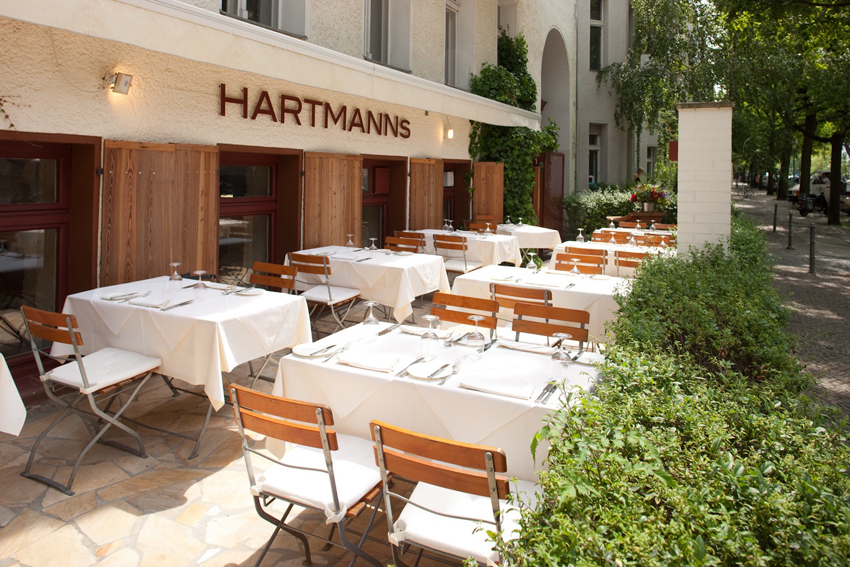 I am not a restaurant critic. But my fiancé, Paul, is. I am a scientific researcher (hence my rather straight-to-the-point prose) in the fish biology discipline (specifically trout — important later). In return for agreeing to marry Paul, I often come to be his chosen review date, a treat that just about makes the forthcoming contract worth it. And the reason you are reading my review is because, during our meal at Hartmann’s, Berlin, I felt so compelled by the food (or the too-much wine?) I grabbed the voice memo, snapped plates with my iPhone and duty-bound myself to the task of fluffy food talk.

I think I’ll start by getting the boring stuff out the way. Hartmann’s has a lot of good press and a Michelin star. It’s run by the affable Stefan Hartmann who is one of the leading ‘new German cuisine’ chefs in a small (or intimate, as all the other professional reviewers say) basement of a typical town house in an area called Kreuzberg. Think Notting Hill without the dirty crowds. Inside: white walls, white linen, white people. It’s a warm, romantic atmosphere with young, friendly staff and a little peephole into the kitchen ’round the corner, which I don’t know why, but I always take as a good omen.

Now to the nitty gritty: the food. And the reason why you’re reading my utterly biased opinion. The food is bloomin’ great. Nod your head when asked if you’d like to try Stefan’s seven-course tasting menu with paired wines, sit back and enjoy.

As some sort of recompense for my weekends of wine, wine, a cigarette or two and more wine, I consume an abnormal amount of beetroot and can’t get enough of the blood bulb. So, when the first course of beetroot three ways came up, I was very pleased. And it’s testament to Stefan’s cooking that Paul, who has started to shy away from the beets since I started side-dishing every meal I cook with them, also ate every last red smudge of beetroot three ways.

Next up, guess what? Rainbow trout. Had a private detective reported back to Stefan that his latest restaurant reviewer ate beetroot all day whilst working to save the plight of our dear trout? A big fillet of my fish-of-choice safeguarded by two towers of salsify (another root) and big juicy orange sapphire jewels of trout caviar that burst on my tongue (according to the voice memo).

As if Derren Brown and had subconsciously ignited my desire for pâté earlier in the day, by having me walk past an anti-foie gras demonstration near the Bradenburg Gate, a plate of the gorgeous stuff turned up next with jellies, poached pear and delicate sweetbread. I was beginning to think I could predict what the next course would be — and so forecast some ‘baby’ lamb.

And as if by magic, baby calf (close enough) was the next course — specifically a calf thyroid from a calf that had been allowed to suckle for longer than usual (delicious bitty!), thus producing a more succulent and musty taste. And a great conversation topic for us, as unbeknownst to Paul and unlike the actual sweet bread served before, this sweetbread was a big juicy gland and the best I have ever tasted.

Out next comes perfectly mashed carrot and suede (a million times better than Mrs Mother’s) and handsomely strong venison that’s able to pop its head up above the last four courses amongst some sprout leaves that some poor bugger has spent all afternoon separating.

Lastly the sweets — a sesame seed dessert, which didn’t require memo-ing but kudos for not flopping out a slice of cake, and then a plate of truffles and mini cheesecakes, which is quite honestly the last thing you need, but you eat nonetheless.

If this is how you do a restaurant review, then it’s great. But I suspect I got one of the best out of a big and potentially bad bunch of restaurants and chefs. Well done Stefan and well done Hartmann’s.

Britain’s social calendar runs from March if you care to take in the Oxford and Cambridge Boat Race, to September and finishes with London Fashion Week and Goodwood Revival. But for those of us who prefer our events to be a little more traditional and a little less frequented by this year’s batch of social media darlings, Royal Ascot is the pinnacle. Of all the events attended by Her Majesty, Elizabeth II, there can be no finer display of heritage and style than that of the five days of Royal Ascot held annually in June. This year, to help us navigate the gauntlet of the famed Royal Ascot Dress Code, we’ve…