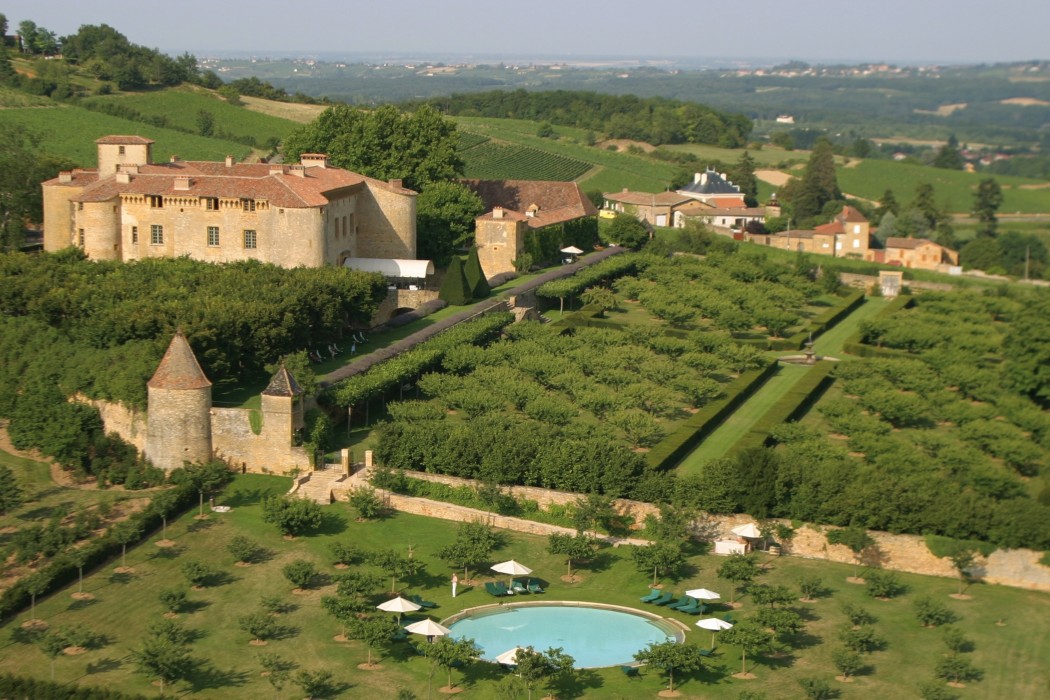 Is there anything more splendid than spending a night in a chateau? Of course, I am accustomed to penthouses, apartments, villas and the like, but nothing has the quite the same feel as a chateau. I first encountered this mainstay of the French countryside whilst visiting the Comte and Comtesse de Vanssay in the Loire valley. How wonderful it was to wake up in such a grand building every day, and to become part of that building’s history.

The Chateau de Bagnols was built, or at least started, between 1217 and 1222 by Guichard d’Oingt. He built the main defensive fortress with three round towers linked by curtain walls with arrow loops. After the Hundred Years War – during which the château was owned by royalist d’Albon and de Balzac families – the Medicis arrived in Lyon in 1466 and were instrumental in the city’s rise to the position of commercial and banking capital of France.

It was in 1987 that the present owners discovered Château de Bagnols; a sad, but ravishingly beautiful building with leaking roofs, creepers running rampant, cracked walls and a family of crows living in one tower. It was, however, a ‘Monument Historique Classe’, a building protected by the State for its architectural and historical importance. As much as I would like to educate one and all, the chateau has over eight centuries of history, so you are best off visiting.

We arrived in the evening, desperate to try and arrive before the chef and team decided to call it a night. Luckily we called ahead and were told that the restaurant would stay open late on a Sunday for guests.

No more than twenty minutes later, we were sat in the Salle des Gardes, champagne popped and the sun setting over the vineyards below. The French have basically got it made. The chateau has twenty-two bedrooms and suites, each of which is big enough to host an after party.

I have come to learn that there is always a bottle of champagne on ice when you stay at a French retreat. Our room was to be the Seigneur d’Albon. The Knights of Albon owned the chateau from 1288 to 1453. Each piece of carefully selected furniture dates from the 17th and 18th century. The whole feel of the chateau is wonderfully escapist, a place I could easily have spent a week at.

One thing worth mentioning is that the hotel has a beautiful pool in its gardens; it isn’t, however, open all year round. Even for British travellers who see the four or five degree temperature increase as a reason to emulate Jack Cousteau.

The restaurant is run by head chef Jean Alexandre Ouaratta. Jean was head chef with Bocuse and worked alongside Yannick Alleno at the Palace Hotel in Paris and Courchevel’s Le Cheval Blanc, to name a few. I recommend the snails cooked with herbs, which were to die for. The eggs benedict that followed in the morning was also a dish of pure, unadulterated joy.

If you are planning a long break, why not take the hotel chopper to Courchevel to stay at their sister property, Les Suites de la Potiniere. The chateau is a grand escape – as Awasiwi Odinak said, “Far from the things of man”.

The idea of a sneaky few days away to a boutique country house hotel in the midst of Autumn with long walks, roaring fires, healthy food and the opportunity to be pampered at the same time is my idea of heaven. Add to this that it’s at Robin Hutson’s Lime Wood Hotel in the heart of the New Forest and I am taken to a different dimension altogether. Forgive me if I sound a bit like a Robin Hutson cheerleader, but quite frankly I am. For me Mr Hutson sits in the realm of hotelier aristocracy and if there is ever a lifelong achievement award as thanks from all of…