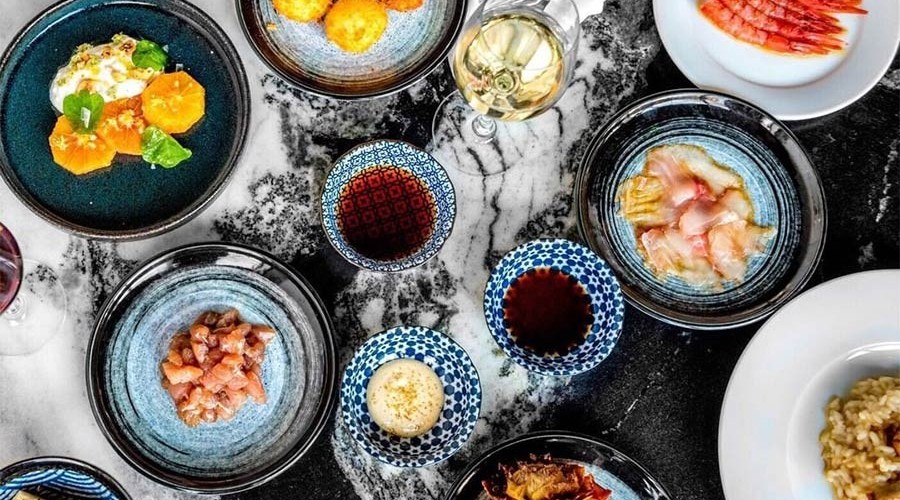 It was last November when I first received word that a new Japanese-Italian restaurant was opening in Dalston, East London. The invitation — for a preview dinner party — contained a certain ‘f’ word. No, not ‘food’, nor the other ‘f’ word so often used when eating out (example usage: ‘How — much?’). The word is — of course — ‘fusion’.

It was with trepidation that I accepted this invitation due to the track-record of Japanese-Italian fusionists. Whilst I’ll admit that I, and all food writers alike, suffer from the same affliction of ultracrepidarianism symptomatic of self-importance, in this regard us sneery writers have been right, the road to culinary hell is well-paved with the intentions of past attempters. Boring, bland, and often over-priced; I have frequently wondered how one managed the mathematical anomaly of taking two positives — Japanese and Italian cuisine — and making a negative.

My pre-emptive hostility, however, was unwarranted and — a few feedings and half a year later — I am confident that Angelina is on to a good thing. What makes Angelina great is not forced, fanatical fusion but an exploration and an appreciation of the commonalities of the two nations produce and techniques. ‘Fusion’— if mentioned at all — is very much tongue-in-cheek.

Undoubtably, Angelina plays to her strengths; with a team whose background include Bocca di Lupo and River Café, it is unsurprising that the food has strong and robust Italian base notes. However, the skilful application of fresh Japanese accents provides an enhancement to the traditional which more than satisfies the curiosity it attracts.

The restaurant interior, on the other hand, has a predominantly Japanese vibe with clean, crisp lines and hanging lanterns. Whilst there is an option to eat at the bar to watch the kitchen, I prefer the marble-topped tables of the restaurant floor particularly as, when the Fritto Misto and the second course arrive, the table gets full quickly.

Arriving on an array of beautiful Japanese porcelain, my partner and I armed ourselves with our forks en-garde; I was ready to use mine should he appear to be forking too much food in his own favour and from his eyes I knew he was thinking the same. Luckily, we avoided a scene of bloody proportions over portions because Angelina has the sense that seems to evade other establishments: a positive correlation of bites to persons present.

Explanation of the plates is quickfire: Japanese fried chicken with sake and mirin; soft shell tempura crab; tempura nettles stuffed with sausage; sea bream with yuzu and aged soy; bruschetta of unagi and gorgonzola; and cuttlefish with squid ink vinaigrette — and that’s the summary version; it’s an understatement to say owner Joshua Owens-Baigler gets excited about the food, particularly the Japanese elements one may be less familiar with.

For me, the stand outs were the fried chicken and the bruschetta. For the former, think of it as the emperor of fried chicken; kinglier than kings and far superior to the lowly colonel. With the latter, unagi — so often the dominant flavour bullying weaker, inoffensive support acts — is made to compromise with the gorgonzola resulting in a powerful but balanced double-act.

My other half continued to favour the tempura nettles which are (thankfully) an Angelina staple and for this visit were stuffed with sausage meat. The sea bream crudo (or sashimi depending on your fancy) is further evidence of the team changing and improving upon core plates; the addition of yuzu made it the best version yet with the hybrid citrus flavour providing a fresh cut to batter crisp of the tempura.

The third course led to ‘ooh’s of interest at its appearance: sausage and clams atop daikon and verza and then topped with bright, almost fluorescent, green caviar. It was fun and slightly alien-looking but tasted homely. I spent a while attempting to capture the last spheres of caviar on the plate with the prongs of my fork but failed miserably and, after admitting defeat, finished rather quickly the young Langhe Nebbiolo which accompanied this course.

Now, my visit to Angelina rounded off a busy week of dining out where I experienced many a good start with very mediocre middles. Thank the heavens above, therefore, for Angelina. Brought to the table was lamb three-ways — and a rather good Barco Reale di Carmignano — roasted, grilled ‘the Roman Way’, and finally in a little tortello shaped like a biretta hat. It was Perfection with a capital ‘P…lease bring me more’ and therefore my only complaint is that there was only one tortello.

We finished with roasted peach, topped with a miso crumb, and a chocolate and amaretto sorbet — it was nothing showy but as I was not on the rue de Bac, that doesn’t bother me. It was a dessert your mamma would make, using nonna’s recipe, after an adventurous holiday to Tokyo. Admittedly, the vin Santo di Carmignano was my partner’s favourite part but seeming as he is usually as anti-chocolate as I am anti-fusionist, the fact he finished the whole thing speaks for itself (and also upset me as I would have happily gone in for seconds).

So, what makes Angelina? By understanding that the partnership of Italy and Japan is less about forceful conquest and more about diplomatic respect of each other’s value, Angelina succeeds where others have failed. Fun, friendly, and scrumptious; an absolute pleasure.

Britain’s social calendar runs from March if you care to take in the Oxford and Cambridge Boat Race, to September and finishes with London Fashion Week and Goodwood Revival. But for those of us who prefer our events to be a little more traditional and a little less frequented by this year’s batch of social media darlings, Royal Ascot is the pinnacle. Of all the events attended by Her Majesty, Elizabeth II, there can be no finer display of heritage and style than that of the five days of Royal Ascot held annually in June. This year, to help us navigate the gauntlet of the famed Royal Ascot Dress Code, we’ve…