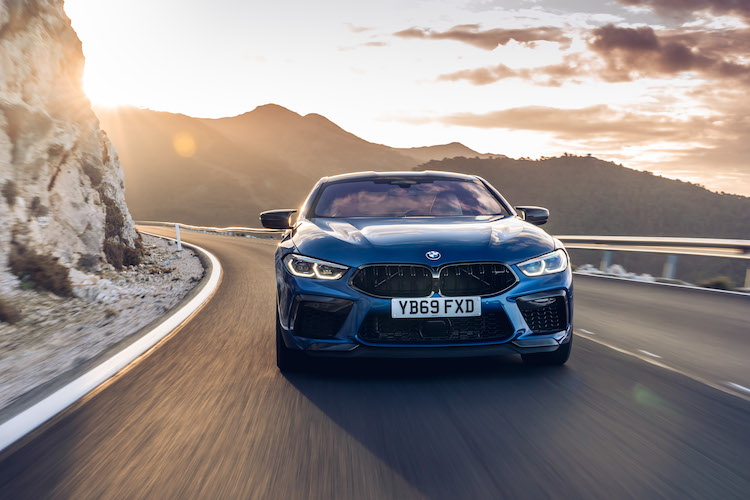 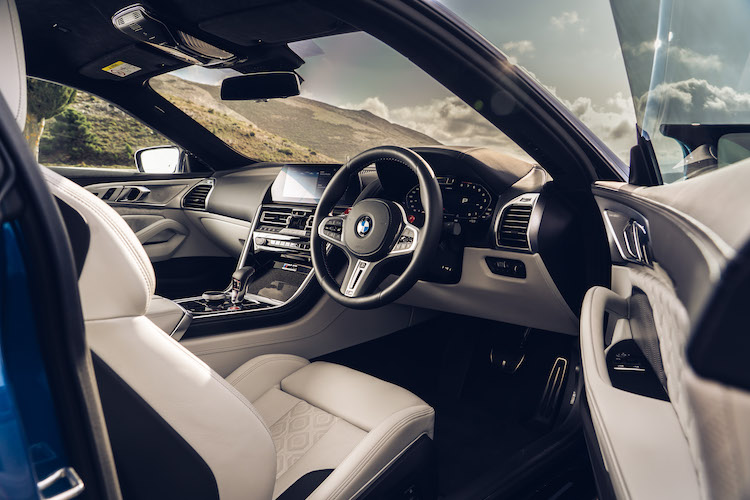 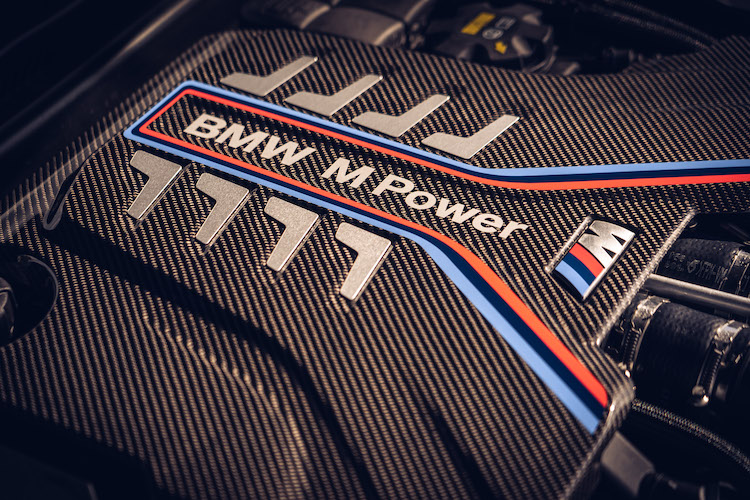 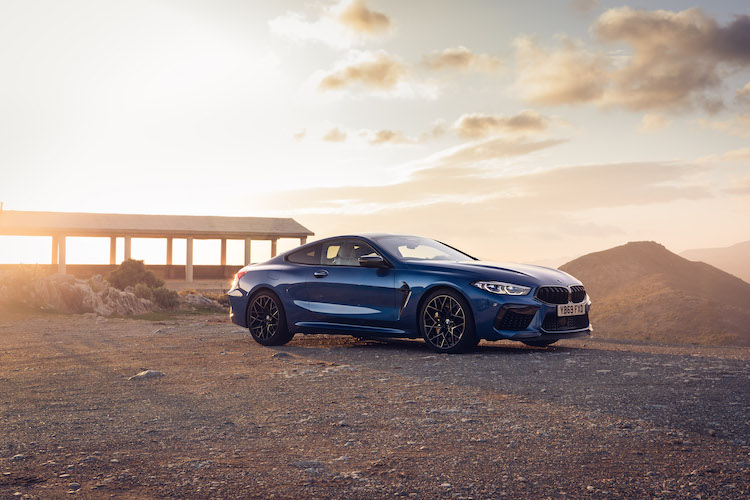 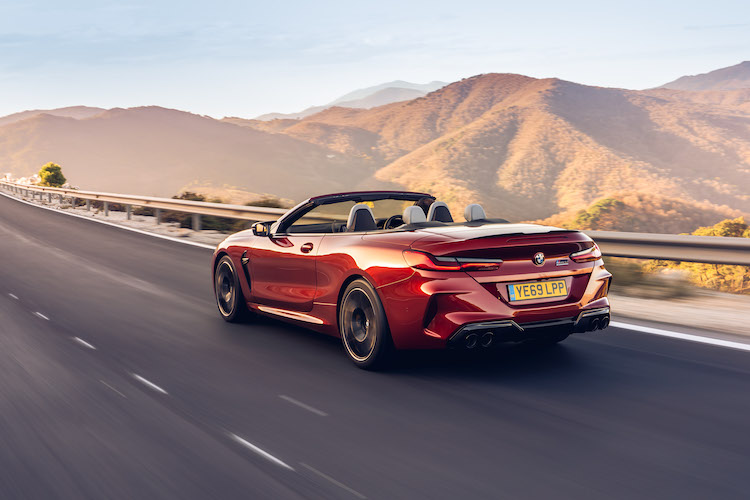 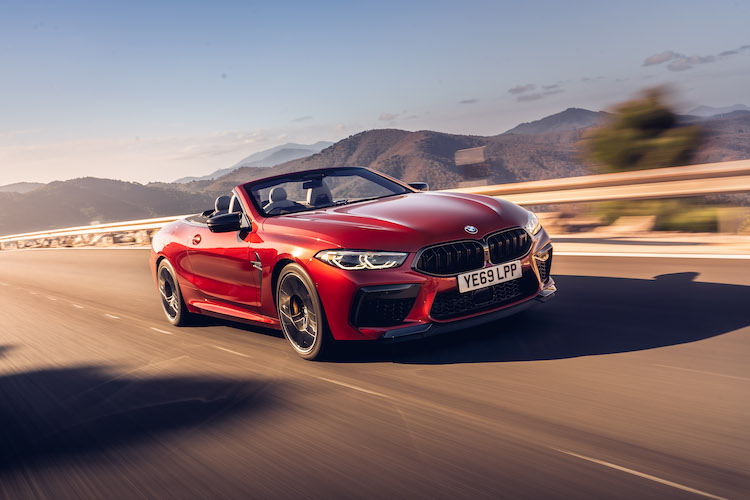 I can’t quite remember when the phrase ‘things used to be better’ became a fixture in my thinking. I’m 38 but feel more and more like an octogenarian when faced by the world we live in today. Technology innovations, slang, TV programming, and don’t get me started on chart music. I know none of it. When I was a boy, a BMW 325i was a 3-series BMW housing a 2.5 litre engine. One knew, by virtue of the fact, that a 323i housed a 2.3, a 316i, a 1.6 litre engine. A code so simple most could follow.

In 2019, due to economies of scale, and increasingly stringent restrictions for car manufacturers to work within, means we see the same architecture rolled out across multiple states of tune. The number system we so easily used to denote the potency of our favourite Bavarian charge has fallen by the wayside and we rely more on a keen eye than a badge.

What hasn’t changed is what the famous M designation means for a BMW product. And that is something true whatever number follows it. A car market catalysed by £23 billion in PCP debt has helped manufacturers appeal to ever-widening buying demographics. We have seen the rise of the so-called M-lite models of the current and previous iterations of both the one and two series models. The recently released M340i;  as well as diesel M lite cars in the form of the M50d in various SUV clothes across the line-up and the similarly powered M550d. Whilst providing another range point for the buying public, has it in fact dampened the appeal of the full-fat models out of Germany since their first foray with the M1 in 1978?

The M1 is actually a good point to start, and a useful reference point to how far the car market has progressed in the 40 years, since Giugaro cast his eye and pen over the design. Lamborghini was pencilled in to partner, but financial constraints put paid to that. What came was a Dallara-derived chassis (another name rearing its head again recently) mated to a mid-engine 6-cylinder unit. In coupe form, it was capable of over 165mph and delivering 277bhp from an engine taken straight from their famous flier, the 3.0 CSL. Fast forward 40 years and the BMW’s range-topper again derives itself from a racing heritage, namely the M8 GTE seen in the World Endurance Championship. What our 2019 eyes now behold is a long, purposeful coupe that retains a menacing presence through carefully selected and keenly directed styling cues. The ‘double-bubble’ carbon roof echoes racers of the past. The carbon side gills, engine cover, mirrors, front intakes, rear spoiler and diffuser are part of the ‘ultimate package’. 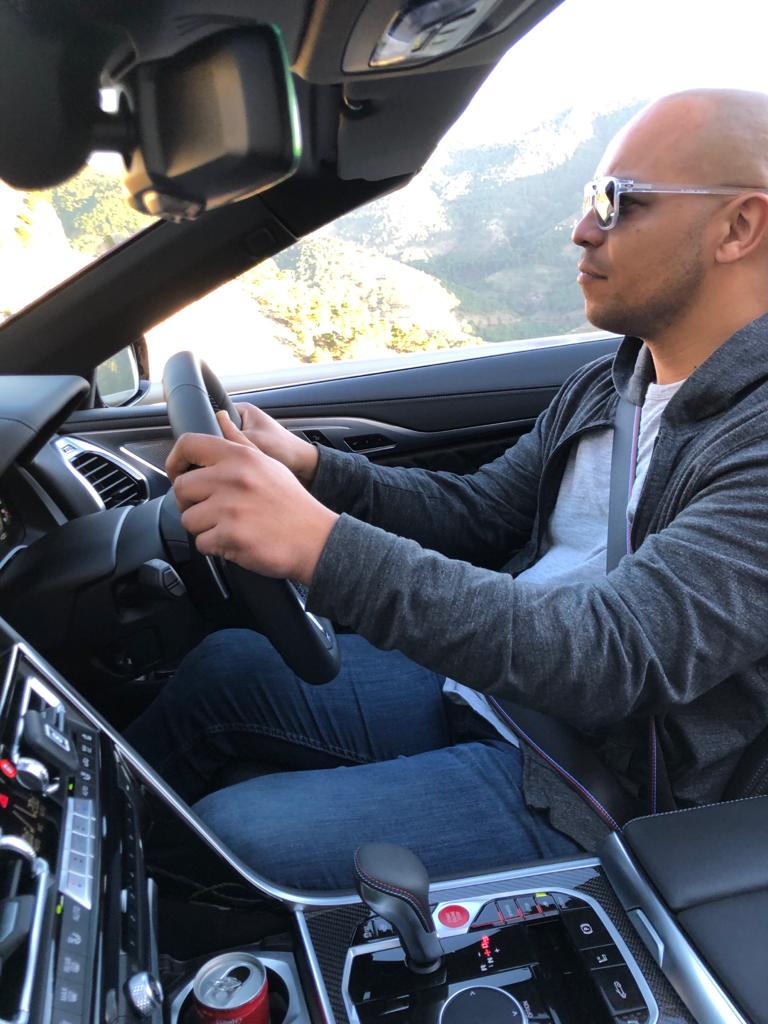 Aaron looking calm and collected at the controls.

£20,000 worth of the finest extras BMW can offer. This includes a formidable Bowers and Wilkins stereo, quite staggeringly effective carbon-ceramic brakes, an M drivers package (more on that later) and laser lights. This doubles the already powerful LED effective distance from a not short 300m, to a quite long 600m. Other options include two styles of alloy wheels, plus the possibility for BMW individual exterior colours.

For a car measuring some five metres in length, interior space is, let’s say, restricted. The rear can only really be described as an effective 2 by 2 arrangement. Given the car’s overall size, that does mean luggage room is immense. So, for a couple off on a weekend, bags can remain securely in the boot with no intrusions into the cabin space. The driver cockpit area is wonderfully appointed in BMW’s finest merino leather. This is complemented by tactile swathes of alcantara, the two-tone style exclusive to the M8. The new switchgear and infotainment systems, now in their seventh generation, prove intuitive, and not just to those familiar with the BMW set up. The touchpoints do feel like those of a car at this price point, which is no mean feat given the cars actual price point. £123,000 list; £145,500 as tested.

So, what does nigh on £150,000 in the market today give you from the minds and metal of BMW? Well, for a start there is the powertrain. The S63 code engine in this form is a 4.4 V8 with two twin-scroll turbos, featuring race-derived cooling and a high-pressure injection system. In competition trim that equates to 625PS and over 700nM torque powering all four wheels, in two different modes. Or like the F90 M5 that preceded it, 2wd sending power and torque to the rear wheels only through the eight speed ZF box. 0-62 is seen in 3.2 seconds, the convertible model following a tenth later in 3.3. 3.2 seconds.

Rolling through the Andalusian mountains, straights between the bends are seen off with such disdain as to be laughable. Even when the 1885kg mass gets rolling, those prodigious brakes as seen on the example tested, coupled with a rear-wheel steer function, makes the twisty parts strangely satisfying. A car this big and heavy shouldn’t perform this well through such unpredictable and, in places, extremely tight roadways. As you look to trim speed that you barely thought possible, the carbon ceramics clamp hard. And when it looks as though you may scrub into understeer, the rear wheel steer kicks in to pivot the car. That can, at first, feel like a kick of oversteer, but you learn quite quickly what is happening under the body and also quite how capable the car is. 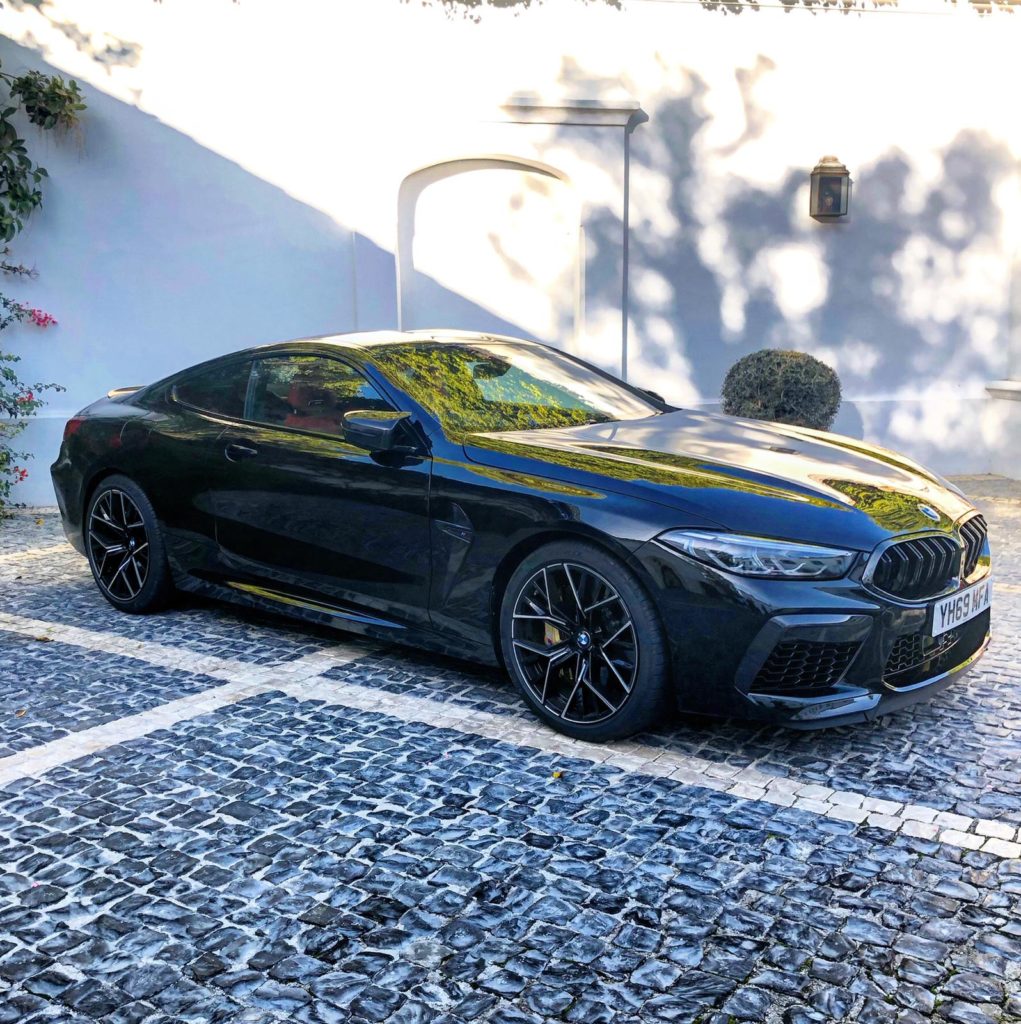 This replicates across the full gamut of road types. Twisty mountain roads: check. Motorways: check. Urban surface road: check. The mass is hidden well, but you aren’t lured into thinking you’re driving a much smaller car. It almost demands that you are aware of its mass and size in order to get the most out of it. An active M differential, variable damper control, a new front stiffening plate and enhanced engine mounts add up to a grand tourer that rides stiffer and more focused than most of this segment. Like a 911, you can read the road in part through the connection of posterior to seat, and whilst electronic steering can feel numb, the surprisingly taut chassis still provides enough feedback to keep one on road.

A new range of driver set up is possible through the 12.3-inch main screen. Allowing new levels of individualisation: changes to the power delivery, steering feel and also brake sensitivity levels. An ‘M’ mode button is also introduced that in ‘track’ setting, allows for a full ‘off’ state for all the driver aids prevalent in today’s cars. So, those aids designed for traffic and pedestrians, impact warnings, lane assist et al, are fully disengaged to allow one’s attempts at heroism to go unchecked. This centre screen is partnered by a 10.25-inch digital instrument binnacle that again can deliver a range of information to the driver, ditto the HUD. The centre screen also allows for up to 10 pages of personalised home screens, each allowing up to four ‘widgets’, meaning one can trim the information presented to their own desires. The technology extends further to the ‘drive recorder’: essentially an inbuilt dashcam that autosaves up to 40 seconds of video in the event of a crash.

Manufacturers being restricted by the new set of emissions regulations has meant a degree of sanitisation of cars, especially aurally at this end of the market. Across the way, in Affaltabach, those developers at AMG are scratching their heads similarly. However, the engine note is purposeful, if not guttural; it peaks with a bark, not a shriek, and it certainly has a tone that singles itself firmly out as an M car.

It is, of course, still very much a BMW; just one that sits high atop of an ever-increasing product line up. Is it a car that demands the price tag? Does it do enough to tempt buyers away from another manufacturer’s metal? Can a car this size and weight really sit as a full-fat sports car?

High in the mountains of Malaga, with the sun beating down, the noise of the engine echoes through the sky, the grip of the leather and Alcantara seats holding firm. It certainly feels like a £150,000 car. As the expected arrival time on the GPS starts dropping minutes in increments of 10, one cannot escape that it’s not only sportscar-quick, but would certainly worry some supercars. I mean, the new Aston Martin DBS Superleggera will reach 0-62 in less than 3.6 seconds. Nearly 0.5 seconds behind the M8 – and that costs a leg-crossing £225,000 at base. The question of tempting purchasers is, however, more difficult given the profile of £150,000 car buyers is so different now to what it was 20, even 10 years ago. It’ll certainly attract some.

The build quality and reliability, the ease of the dealer network, and the slightly more reasonable running costs than other more exotic rivals will certainly prove attractive. As will the contributions that could be seen on new orders, I’m sure. Others will retain a degree of snobbery concerning badge desirability at this end of the market, but for those, I’d probably just give a knowing smirk and then embarrass them to 62.

Gregarious, opinionated, a destroyer of cocktail menus and invariably late. Motoring Editor Edgeworth leads the team providing automotive content stemming from years of passion and part time work. A keen eye for design and a horder of factoids combine with a love of architecture, good food and the occasional party. Mostly found avoiding public settings.

The Nadler’s facade is one of my favourites. It’s probably meant to look quite divine and heavenly – after all, it’s a statue of an angel – but it’s actually quite demonic: black with pins protruding from the face and body. Still, there’s a certain beauty about it, one that exudes class and otherness; something out of the ordinary. This understated hotel is located just off Soho Square and strikes the perfect balance between form and function. There’s nothing superfluous here, just tasteful, clean design, a blend of business and pleasure. The colours are warm and elegant, which is exactly what you want from a hotel. Check-in was one of…