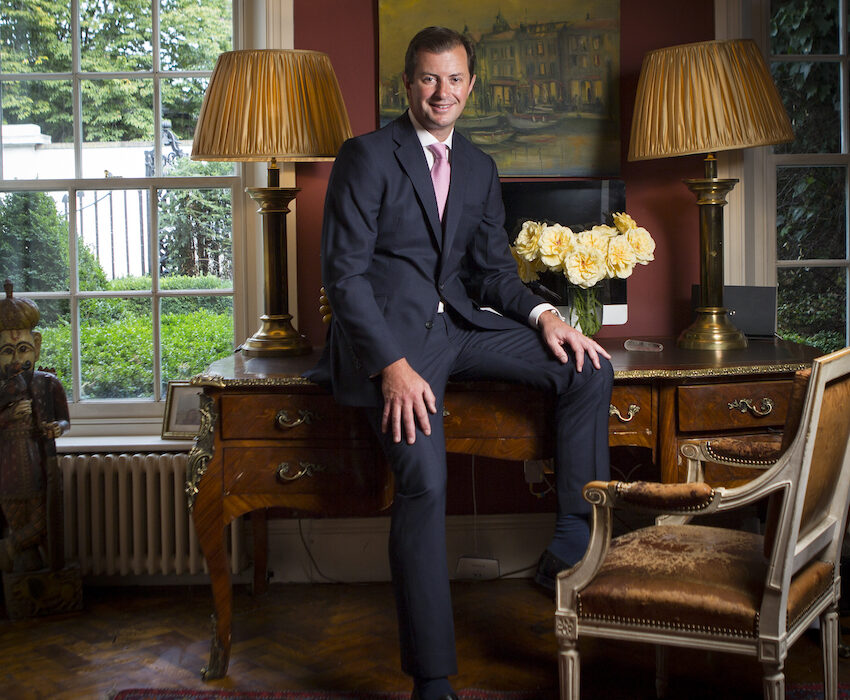 Alex Christian, the director of Savills private office in Central London, is missing the spontaneity and long lunchtime meetings of the pre-pandemic world. He begins our conversation by lamenting just how organised and scheduled everything has become. In doing so, he already speaks for the vast majority of us aching to chat business while sunk into a battered Chesterfield, with a bottle of something lovely from the Left Bank lubricating deals along the way.

Ah, well. Maybe in a month or two.

With back-to-back telephone and video meetings booked for the day, Christian is a busy man with a broad portfolio of properties to keep his expert eye upon, and an even broader international clientele to keep onside during these unpredictable times. Despite this, he’s clearly in the mood to chat, and exudes a surprising optimism throughout our conversation. This somewhat flies in the face of what we’ve been primed to believe about the property industry in the murky waters of post-Covid Britain. Aren’t we supposed to be bracing for a crash, and preparing for a country beset by wind-blown high streets littered with empty shops and echoing office blocks?

Alex insists this dystopian vision is far from realistic, claiming that recent months have seen the high-end real estate market in London – and elsewhere across the country – buoyed by an infectious positivity and reinvigorated interest. A sense of stability has returned to the UK, according to Christian, and for those seeking to invest in property, there’s plenty of good news on the scene – with even more to come.

READ THE INTERVIEW HERE IN THE SPRING EDITION

As somebody who’s been in the industry for over two decades, how does the pandemic compare to previous market challenges you’ve seen?

Quite simply, it doesn’t.

The most protracted downturn that I’ve seen, in terms of sales, was in the months following December 2014. The rapid changes brought about by George Osborne in stamp duty, inheritance tax, levies put onto foreign investors looking to purchase real estate in the UK, the mansion tax… all of this, compounded by the Brexit referendum and the sudden dip in the pound made London, for the first time in years, look relatively unattractive to investors.

I was doing a lot of travelling at the time, and without exception, I was meeting people overseas who would comment that London appears overtaxed. We lost a lot of our top-end international buyers and mid-rate investors at that time, and they only just started returning to the fold as Brexit finally seemed to be sorting itself out. The credit crunch of 2008 was another difficult period, but essentially it was wrapped up within a year – a short, sharp shock to the system – and yet amid the panic, there was plenty of opportunistic buying.

The main issue of the pandemic – and why it stands apart from other market challenges – has been one of logistics. It’s not that foreign investors don’t want to buy in London, it’s that they simply cannot get here to do so. We’ve seen incredible demand building up since the election in 2019, yet people haven’t been able to come to these shores for almost a year to close their deals.

In a nutshell, Covid-19 has restricted turnover, but it hasn’t done anything to impact prices at the top end of the market. In fact, in this sector, we’re anticipating a feeding frenzy.

Have there been any new or unusual property-buying trends you’ve seen as a result of the pandemic?

It’s not rocket science – we’ve seen those in the domestic market buying their way further up the property market. Prior to the pandemic, we were seeing domestic buyers invest between ten and twenty-five million pounds, whereas now it’s not uncommon to see the same bracket of buyers putting in forty to fifty million. The private equity and hedge fund guys have done well throughout this period, and it shows in the figures and how they’re driving these top-end investments.

Interestingly, those buyers seem to be migrating away from their typical heartland of Mayfair, Knightsbridge, and Belgravia, and opting for property in Chelsea, Notting Hill, and St. Johns Wood. They want the gardens, the space, the leafier more village-oriented spots, and this is a major trend that doesn’t look like it will reverse any time soon. The market has become property-specific rather than area-specific, and this is the result of trends that began at least a decade before COVID struck.

What about outside of the UK – are the trends similar?

Absolutely. People are taking a long, hard look at their lives and reassessing what they need from their properties. The demand for homes in Hampshire and Wiltshire has been matched by demand in Somerset and Dorset; people want the space, the community, and they want more for their money.

In terms of investment properties – what changes have you seen? Have, for instance, your clients who let properties been impacted in any way?

Rental demand is still very strong, as the rental market – especially among foreign buyers – is driven by taxation. However, the tide is showing signs of turning, and a lot of investors who were happy to let their properties in recent years are now looking to buy and sell property instead, and the same can be said for a lot of tenants, too.

We found that a lot of our clients weren’t able to sell for the past five years at the prices that they wanted, and as such, became almost accidental landlords as a result of market dynamics. A lot of them have decided to sell in recent months, as this was what they always intended, yet they had no choice but to wait for the right moment.

With so many people now working from home, in what ways has this impacted your commercial clients with offices and sites, and how has this affected that side of your business?

Logic states that this is a sector that was due a significant downturn, as there has obviously been this huge drop in occupied office space. While there has been a dip in demand, it’s been nothing like what was feared. It’s extraordinary – there are still really good deals being done in this sector, as people still see it as a fairly safe investment.

When it comes to potential investments for our readership, what type of real estate has proved popular and resilient during the pandemic, and what looks good for the future?

Undoubtedly, the most resilient type of real estate in these times has been houses and family homes. In London, it’s all been about houses with gardens within touching distance of the capital’s various villages. To give a prime example, we’ve seen huge spikes in interest in Wimbledon and Richmond – these green, leafy areas that feature plenty of shops, independent eateries and bars have proven incredibly resilient.

Wider, low-built and spacious houses, especially detached family homes, have been in higher demand than I’ve ever seen. On the flipside, we’ve seen the classic London six-storey townhouse suffer, along with flats and apartments in some areas. Again, it comes down to that desire for space, for gardens, and for the touch of greenery that has typified the market in these times.

What about investment opportunities overseas – which regions or properties are showing market resilience?

The locations that have fared well during the pandemic are those that are not reliant purely on overseas purchasers, and as such have strong domestic demand.  Investors in Geneva are snapping up property in Verbier, those in Madrid are investing in the Costa Brava, and the French Riviera is benefiting from lots of Parisian interest.

There has undoubtedly been a shift to larger properties as people seek space, especially second homes that people actually live in, rather than use as holiday homes. On top of that, we’ve also seen a rise in branded residences off-plan and even site unseen. Powerful branding on a development – such as W or Mandarin Oriental – gives buyers more confidence in their purchase, making them strong investments throughout the pandemic.

Where do you see the property market and property investment going from here – have there been any opportunities being created by the pandemic?

Well, it certainly hasn’t created what your average international investor expected after the first lockdown, which was value and distress. There’s been very little distress, and in fact, the post-Brexit and majority government situation we’re now in has flooded the market with a really positive sentiment.

The UK is being seen once again as a stable country and a solid, safe-haven player. When you compare the other parts of the world from which we typically attract buyers – namely Hong Kong, the Middle East, and even the US – you’ll find plenty of turmoil which we simply aren’t experiencing here in Great Britain.

London remains not merely an amazing place to have a home, it’s once again being seen as a great place to invest. This is especially true of our newly-moneyed friends in the Middle East and Asia, for whom London – especially a post-Brexit London – retains an amazing pull.

What’s the one piece of advice to anyone looking to invest in property at the moment?

Property trends, as a rule, have the ability to change on a sixpence. One thing to bear in mind is that the foreign contingent of investors have their own tastes. And personally, I think that the Mayfair and Knightsbridge scene will take off again in the near future, as a result of these preferences and as a result of travel restrictions being eased.

If I had to choose, I would say that the one area due a serious uptick is the lock-up-and-leave new development – big lateral spaces in the West End or centre of town. There’s still plenty of good stock in these developments, where all the security and amenities are in place and ready to go, and where foreign buyers can spend a couple of weeks per year before shutting the door and heading elsewhere with peace of mind. Because this market sector has suffered a lot over the past year, there are bound to be plenty of good buys to look into.

At the end of the day, what we’ve seen recently isn’t going to reverse in the near future. If you can invest in a property with a garden and that’s close to a park, you’re onto a winner.

Norris is a copywriter and journalist from Bristol, England. He works regularly with some of the world’s leading luxury brands, and splits his time between the UK, Germany and Hungary. Norris also has a penchant for Alsatian wines and dodgy 80s synthpop.