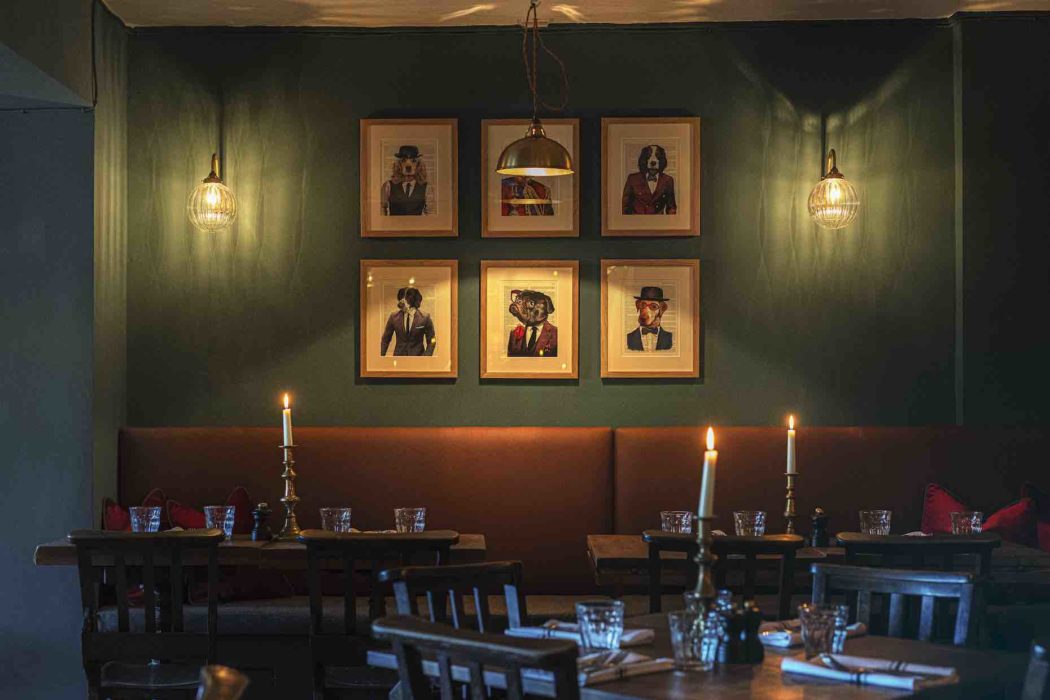 The Morgan raced on down the lane as the late October rain pelted the demure metal figure of British engineering. The storm had been battering my small enclave of the British Isles for some time. So much water had risen, I was beginning to forget a time before the flood. The weekend had been considerably less torrential. A pre-emptive group escape in an equally well-revered corner of the country, Clov… actually, I think I will confiscate that one. A scene so acutely pure and picturesque, yet so formidable to get to. We had braced and swam in the green marbled sea and crashing waves. We sought shelter under a cliffside waterfall to open a bottle or two to improve blood flow. From the calm of the coastal landscape to whipping through an autumnal tempest in the Cotswolds, the year had been tumultuous to say the least. But with a destination on the horizon and a Morgan Plus 6 at my fingertips, life seemed like it could be bent to my will once more.

As we crisscrossed the Cotswolds, we made sure to take the more scenic route. Though very little isn’t appointed a plaque, rosette or award in one shape or another here.

The last time I had been to Guiting Power was Christmas 2016. I was staying at Barton Farm and was keen to see what the local watering-holes had to offer. The nearest pub on the boundary within walking distance was the Hollow Bottom. I remember a sizeable pizza menu, substantial horse-racing ephemera, and a few patrons under five foot. Perhaps it wasn’t the first pub I had visited that night.

What I did know of the Hollow Bottom was that it was arguably fabled and had a clear and present racing pedigree. Its proximity to trainers Nigel Twiston-Davies and Fergal O’Brien’s operation meant that a Gold Cup or Grand National knees up was a forgone conclusion each year. But that alone didn’t particularly entice me to drive across the county for a pint there. What pushed me was the pub’s sudden closure in July 2019. After some 18 years of operation (which in the current climate is to be bloody well commended), the landlord had decided it was time to move on. I imagine locals from acres around lamented the news of the closure. But it was short-lived, as bad news usually is. As a Cotswold dweller for some years, I had the virtues of the Lucky Onion instilled in me soon after I moved to the area. Anything they touch will arguably turn to hospitality stock options via savvy marketing or sheer force of will. 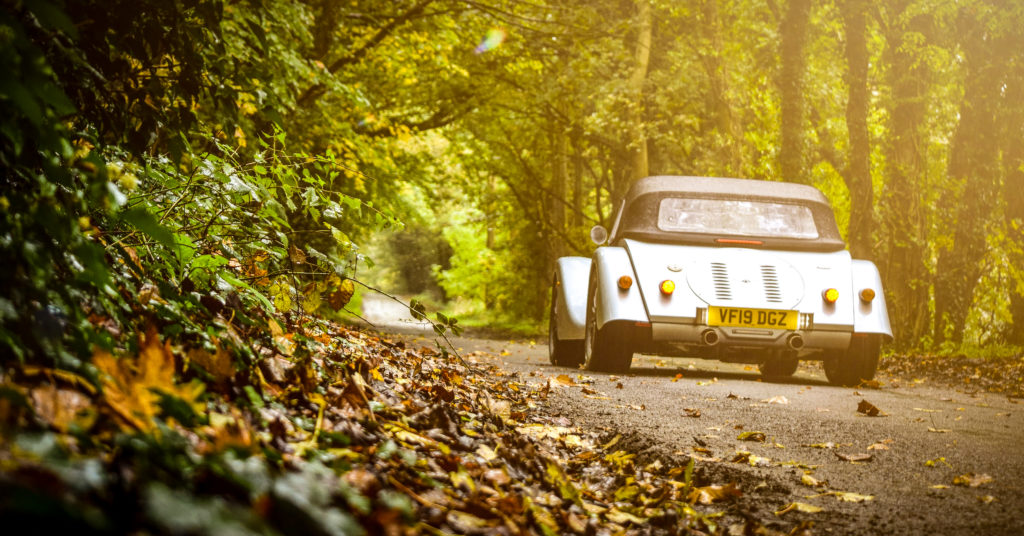 So, I was on the road to discern what the newly-refurbished and reimagined Hollow Bottom Pub in the village of Guiting Power had become. I did, of course, try to glean some sort of advanced report or at least general consensus from the commentariat before arriving. No such luck. I turned first to the Telegraph, who have made quite a habit of producing adequate, albeit rather banal and nepotistic travel editorial, in a sort of paint-by-numbers way. I got what I expected: a love letter to booking.com. Not satisfied, I went onto the Cotswold Life page to see their summation. A press release milled into article format and posted in place of, well, journalism. The in-house counsel tells me I am on solid ground there.

I was, therefore, racing along to the rarest of occasions: the opportunity to dine somewhere with zero expectation or previous acquaintance.

I pulled up outside, taking care to ensure enough distance from the pub to alight the now muddy Morgan without appearing to be a quadruple amputee. As my mac caught the wind, I knew it wasn’t to be. I would have to clamber out with all the glory of someone with an iconic car but rickets.

The pubs seventeenth-century stone face sits well amongst its neighbours, weathering gently. I am not sure how much adrenaline was still flushing through my system as I arrived, but I recall there being a bar (though smaller than I remember). Full disclosure: I was a little sauced from an Epernay breakfast. So yes, I will need to go and prop myself up at the bar and try not to case the locals, at some point soon. In my defence, when the offer was made to be seated or have a drink at the bar at 1230, I was more in need of some fine country fare than a pint of Guinness. This is racing country, though, where you certainly wouldn’t be judged for getting biblically stuck in.

The dining room was certainly true to the group’s curated-design ethos. Exposed beams, open fires, stone floors, a darkened hunter-green and burgundy colour palette, all partnered with a few tons of Cotswold Stone. Elegant ornate silver candlestick holders might adorn each table and eclectic artwork might hang on the walls, but you still won’t miss the flat-screen TV showing the jumps racing season getting into full swing. The Showcase is the first meeting at Cheltenham that signifies to many that the National Hunt season is really up and running. For those of you aghast at the very idea of a TV in any dining setting, get off your high horse and drink your local ale. This is racing country. 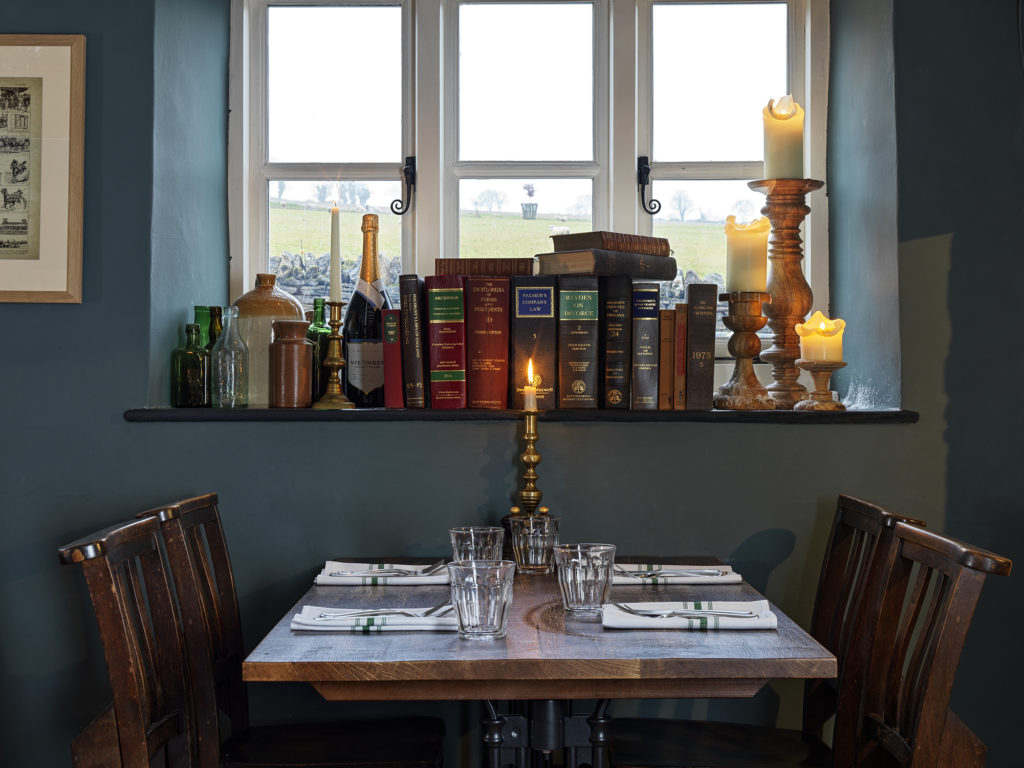 The menu for the afternoon was a foregone conclusion for me, despite its strong choice of stock, font and foil. Once a publisher, always a publisher. David Minns of tailors Brown in Town turned me onto devilled lamb’s kidneys some time ago. It’s been a long time since I saw David’s somewhat linear face, and about the same amount of time has passed since I ordered the dish, so that was a given.

When the plate arrived, the aroma from the mound of well-spiced kidneys was all too familiar. They were rich and gamey in each bountiful bite. Furthermore, biblically filling. Especially on top of the chorizo and goats cheese crumpets I had used to line the stomach that morning. I finished the dish in fifteen minutes and started to wonder whether ordering the ham, egg and chips had been a colossal mistake. Guests were beginning to arrive in small groups and conversation was breaking out as each race commenced.

“Are you heading down today?” I was asked by a rather staunchly dressed lady. “We’re not, no. We’re headed to the galleries in Stow on the Wold,” I replied. “You are certainly dressed for the races,” she quipped, raising a glass of champagne. I, of course, followed suit with a glass of Nyetimber Rose. It was at that moment, the waitress bought forth the ham, egg and chips, with the ham easily the size of my fist, if not more generous. I looked up across the table at my dining partner with a raised eyebrow. A sizeable glazed ham hock sat staring at me, slow-cooked, well-seasoned; my Everest. The eggs and chips were modest enough and fitting of what one might expect. Three forkfuls in and I was ready to take to the stage and declare this, arguably the greatest ham, egg and chips I had ever tried. 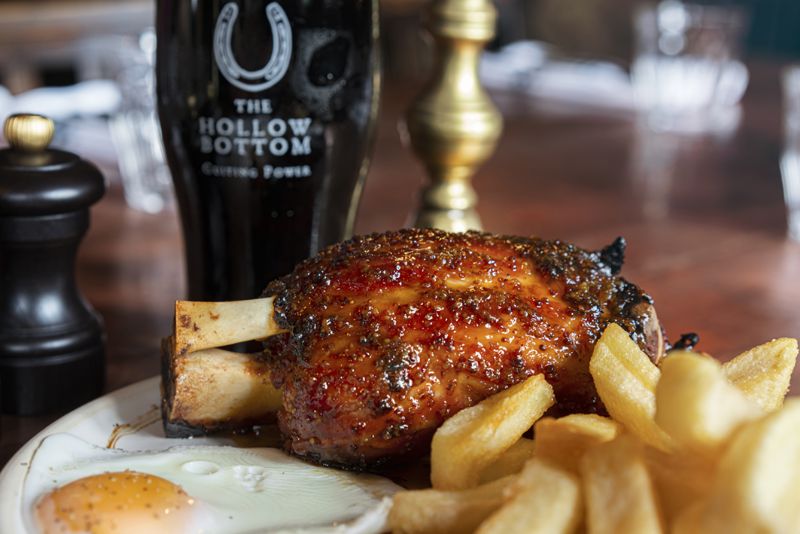 Despite an intense discussion surrounding puddings, we decided to forgo the treacle tart, sticky toffee and spotted dick. There simply wasn’t enough room. My choice of dishes was regal gluttony taken to its grotesque extreme. What the hell was I thinking: crumpets, kidneys and a ham hock?

As my head hit the hard, stone floor from a final pork-based body blow, my trainer threw in the towel. She knew I didn’t have it in me. She was already sizing me up for a gastric band. Alas, the ham hock would go unfinished today. There are very few circumstances in which the restaurant team are likely to use your leftovers in any way shape or form. If you are too meek or self-conscious to have the remains of your dish arranged into a discrete container, more fool you. There is something immensely satisfying about sitting at the dining table in the privacy of your own home with a flagon of wine in one hand and a ham hock in the other.

So, the Hollow Bottom, after some 20 plus years, lives on. Another team, another kitchen crew, but still retaining its original Cotswold charm and engaged horse-racing clientele. No doubt over the coming seasons its patronage will swell. Winter nights will give way to summer evenings, the terrace will pack, and the Hollow Bottom bus will gladly go back into operation, ferrying the inebriated home. If I lived closer to the village, Ii would certainly be a favoured weekly watering-hole. But as I don’t, I will have to make do with the occasional visit on horseback.

On my first ski trip, what seems like millennia ago, my friends insisted that we watch Art of Flight. It was a right of passage they said. Sure there were plenty of other cult boarding films out there. But art of flight was really pushing the boundaries. You try carrying five 4K cameras weighing in at 60 pounds a piece into back country. The staff at The Review are always interested in alternative investment opportunities and film is one that is sure to be with us for a long time to come. Cinematography is an art form, one of the last few vestiges that has a trade craft. Taking that…