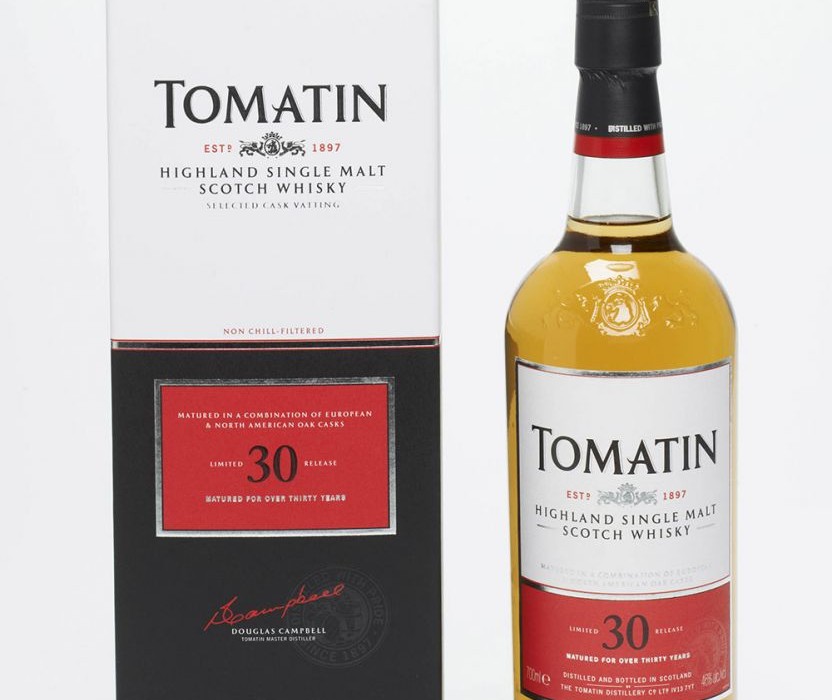 This issue, we look under the carpet at the Tomatin Distillery, located in the Monadhliath Mountains, just south of Inverness. Established in 1897, the distillery is one of the highest in Scotland, at 315 meters above sea level.

We get it: you look down on us.

Described as ‘soft and smooth’, the 14-year-old whisky has spent 13 years aging in Bourbon casks and a further one year finishing in Portuguese port pipes, which held Tawny port for between 30 and 40 years.

“In recent years we have really started to make our mark in the single malt market with recognition for the high quality whisky on offer from the Tomatin Distillery,” said Stephen Bremner, sales director for Tomatin.

“I am confident this new expression will sit nicely within the range and, most importantly, will be enjoyed by our customers.”

The high alcohol levels dull the nose on this dram. It is finished in Tawny Port pipes for just over a year. The new wave of craft distillers are using port wood to take whisky into new realm. In general, port pipes are tremendously difficult to get hold of these days. Huge, long-staved casks capable of holding 550 to 600 litres, they are hard to work with and store, and are in short supply. This is what makes the 14-year-old that much sweeter to savour.

It’s a rich aroma of coffee, dark chocolate and bark. For me, I like to return from a day’s grind, take a thick-base tumbler from the cabinet and place one small cube of ice into it. The sound the scotch makes as it hits the glass, the smell that bounds towards you, the way it feels in your hand; there is arguably a ritual that goes along with finew. Or at least, there is for me.

Every time I sip a whisky in the same age range as myself, I remember Robert Redford in Spygame. Pitt turns to Redford and says “I thought spies drank Martinis”, Redford looks up from his glass and says, “Scotch never less than twelve years old.”

Not the worst mantra to live by, I thought at the time. Remembering that Spygame came out in 2001 and I was barely at college meant that I wasn’t necessarily opting for the 30-year-old single malts in the local pub. What a waste of a drinking age.

The Tomatin 30-year-old is limited to just 2000 bottles a year, and is initially matured in Bourbon Hogsheads before being finished for over three years in Oloroso sherry butts. For those of you that like your scotch with a sermon – there you go.

It has a fruity attack on the pallet. At 46%, the alcohol should hit you with a hammer, but is it any surprise that is doesn’t. It has a slight bite, as you would expect, and an oily feeling that lingers. It’s a drop I’d be proud to bring out of the cabinet and dust off for an old friend or close family. That being said, I rarely drink single malt with my family; my uncles tend to pour themselves measures by the half glass and sink them quicker than the Belgrano. I spent too many nights watching them polish off a ‘good’ bottle of scotch whilst grinding my teeth. My dear mother began to hide her good whisky under vases, and such, it quickly became a Molière play with everyone looking for the ‘good’ whisky.

The 30-year-old is a spicy dram, and for an ageing whisky, it is full of life. On face value and initial taste, it is bright and youthful, full of vigour. Of course, behind the Brown In Town suit is a gentleman of a whisky; a man of character and courage no doubt.

Leaving a hectic JFK airport behind, in the comfort of the Dodge Challenger Hellcat, it didn’t take long before I was treated to my first glimpse of the New York City skyline. I might sound like a sycophant but driving into a city always excites me, especially as this is my first visit to Manhattan.