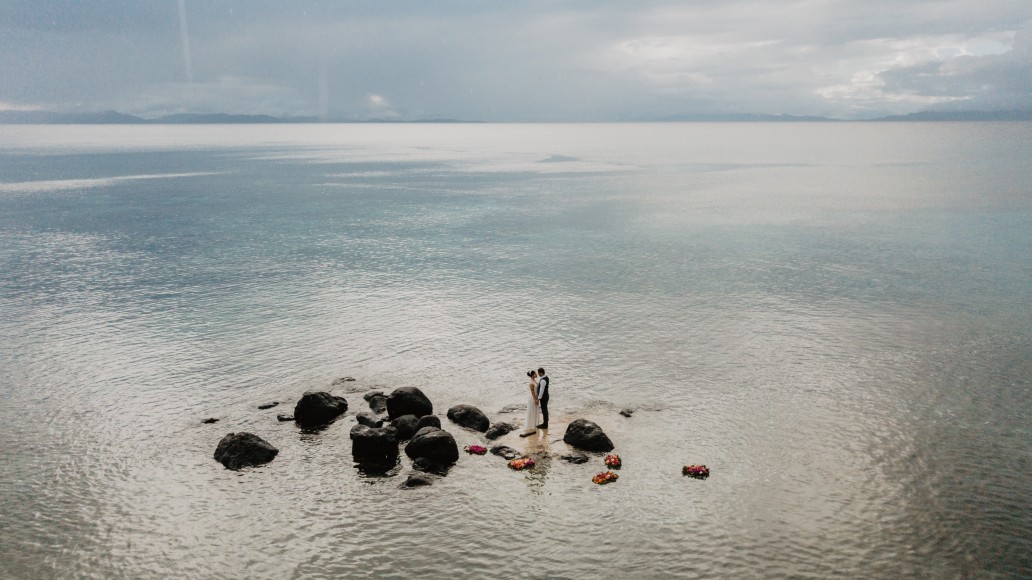 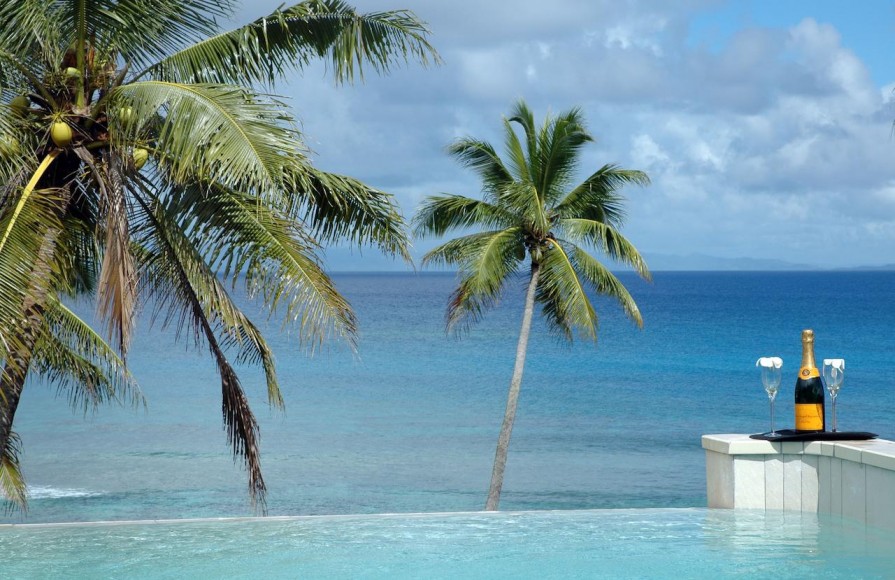 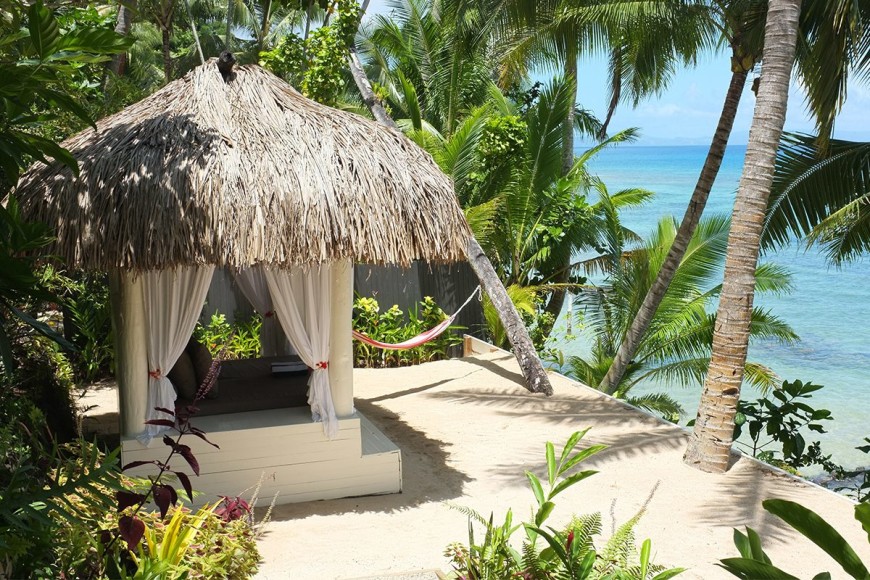 Other than ‘the bride’s done a runner’, these are the last words you want to hear on your wedding day. But here we are: Taveuni Palms, north east Fiji, hoary clouds sagging low in the sky, and a tangible unease as we quaff champagne and smoke cigarettes, praying for the sound of patter to dissipate.

We’d arrived the day before, landing at Matei Airport, which more closely resembles a wooden shack, where one man sits, glances at your passport and waves you through with a resounding ‘bula’.

Colleen, one half of the husband-and-wife team who manage Taveuni Palms, is here to meet us. It’s very kind of her, considering the two-villa resort is a literal stone’s throw from the airport. But this is the type of above-and-beyond service that we were about to experience for the next three days.

I hadn’t done much prep work for Taveuni, despite the fact we were going to get married there. Everything leading up to the big day, including where and when it would happen, was undecided until a week or so before we left. The whole trip – a mix of work, pleasure and matrimony – was an unfolding surprise, a discovery. But none more so than Taveuni Palms.

Just two villas make up this high-end estate, set amongst the biggest paradisaical clichés you can imagine. I would list them, but I’d run out of magazine. Ours is the Horizon Spa Villa, which is all white Italian tiles and dark polished wood. Walking in, we’re welcomed by a bottle of champagne waiting on the kitchen island. To the right, the living space is savvy and comfortable, high ceilinged, with large sofas, a long dining table, essential tech (TV, blu-ray, iPod, portable speakers), a huge mirror, all centred by a majestic bouquet of water hyacinths.

The bedrooms are tastefully minimal, just a bed and a wardrobe, colonial white sheets and canopy, and a stone-floored bathroom that continues to the outside, where you’ll find an outdoor tub and showers.

This place is the blueprint of luxury, an idea of luxury, a reality that I didn’t think was actually possible. And I’m not talking about the décor or the space – splendid though it is – I’m talking about the relationship with the staff and the environment. For starters, we’re the only people at the resort for the first two days, which essentially means that everyone is here for us.

Barry and Colleen take us on a tour of the villa. Outside, on villa-level, is an infinity swimming pool that runs into the lush, emerald flora. Up the coral pathway, there’s a hot tub. Down the path is a sunbathing spot and dining area. Further down, you reach your own private acre of beach, where hammocks sway in the lazy breeze, and a canopied daybed gives shade from the mid-afternoon glare. There’s the choice to dine here too, any time of day – and I do mean any time. Taveuni works entirely to your clock: as soon as you’re hungry, as many times as your belly demands it, simply pick up the phone and let the kitchen know what you’d like. And they already know what you like, because Taveuni asks before you arrive, so that your experience is tailored, down to how many ice cubes you like in your drink.

For me, it’s the perfect set-up, liking nothing more than lounging around, getting a tan, eating fine food, drinking wine and cocktails, and generally not seeing any other people. And being in our infinity pool, glass of champagne in hand, was the first of a few moments I’ll never forget: watching the frenzied twilight hit the ocean like static on a TV, and the faint smell of firewood from the burning torches that set the tone for dusk.

I can’t even remember going to bed that night.

Waking up that first morning – and oh shit, it’s our wedding day – unlike any other morning, anywhere, ever. Colleen and Barry had shown us some spots where the ceremony could potentially take place, but the instant they told us that a few people, including a Hollywood director, had recent swapped nuptials on a small island of rocks in the sea, our minds were made up. A rain shower was forecast, but we stayed optimistic.

Our phenomenally talented photographer, Ropate, arrived, and we drank beer and tried to work out how this thing was going to pan out. All the while, the sky slowly began to drain of colour.

I look across to see Gemma, sat on a lounger, dripping cool in her Catherine Deane dress, and keeping the energy level high. No rain was going to ruin this day. And with that, it was showtime – any longer and we’d be at the mercy of the tide too.

Me first, umbrella in hand, taking the long walk along the coral path to the other side of the beach. Barry is there to meet me, along with all the Taveuni staff, and a small boat waiting to take me across to the island of rocks. I won’t be able to board without getting my boots wet, so one of the guys kindly picks me up and carries me over (because wedding days aren’t surreal enough, right).

As I stand on the island, I have another moment: me, surrounded by the ocean, part of its rippled consciousness, connected to everything and nothing, and this beautiful sense of empty time where nothing else matters. The only thing missing is Gemma, who’s preceded by the sound of Fijian drums, a quartet of warriors, and the choral sounds of the Taveuni staff – our family for the day.

It’s the most fitting entrance for the most beautiful person, who, like me, is lifted on board the boat and drifts closer to the promise of a future together.

Alongside the registrar and two warriors, we stand hand-in-hand, speaking those words we’ve all heard a thousand times, but finally understanding the enormity and importance of their meaning. And in another poignant moment, the rain stops. We look up at the sky and a rainbow appears, stretching from one side of the resort to the other. We’re married.

The others get back on the boat, leaving me and Gemma to enjoy a moment on the island alone. The tide, which until now had been patient and forgiving, started to swallow the rocks, inch by inch. I was so busy rolling up my trouser legs to realise one of my boots had floated away, much to the laughter of everyone. At least I wouldn’t have to be carried off the boat again.

Barry and Colleen made sure everything was just as perfect as the ceremony. Barry had even made a cake, one of the best I’d ever tasted (so good, in fact, we finished it for breakfast the next morning).

As the light faded, we sat poolside at the villa, drinking champagne with Ropate and Charlie, one of the staff who had been playing traditional Fijian songs on his guitar. Though it wasn’t long before him and Ropate were taking it turns to play some more western singalongs – cue Time of Your Life, Wonderful Tonight, and House of the Rising Sun. Our wedding dinner was on the beach, in the crackling glow of burning torches, the most romantic setting I’ve ever been in. Ceviche, lobster, and of course Barry’s wedding cake – the menu we wanted without even thinking about it.

I’ve been travel writing for about 8 years now, but there’s no place like Taveuni Palms. It’s the intimacy of service coupled with a realisation of what high-end can be. And stunning location aside, it’s purely down to Barry, Colleen and the tireless Taveuni family. It’s no wonder they’ve recently added three more awards to their growing collection. This time, World Travel Awards for Luxury Romantic Villa, Luxury Private Villa, and Luxury Private Pool Villa.

And for me? The best place I’ve ever stayed.

Alistair Guy is a celebrated Portrait Photographer who is a regular contributor to the likes of British Vogue, Harper’s  Bazar and i-D. With a portfolio of work that covers everything from fashion to portraits, Alistair Guy is known for shooting some of the world’s most stylish individuals. Not your ordinary fashion photographer, Alistair takes a unique approach by choosing to photograph people in the industry itself. His series of black and white photographs showcase exceptional men and women. Celebrated photographer Alistair Guy and Marcella star Nicholas Pinnock have joined forces to create ambitious exhibition English Rogues, which has just launched at London’s iconic Oxo Tower, celebrating Britain and the English pirates and scoundrels who helped build it.  The duo cherry-picked nine models, actors and rockstars who embodied the wild,…