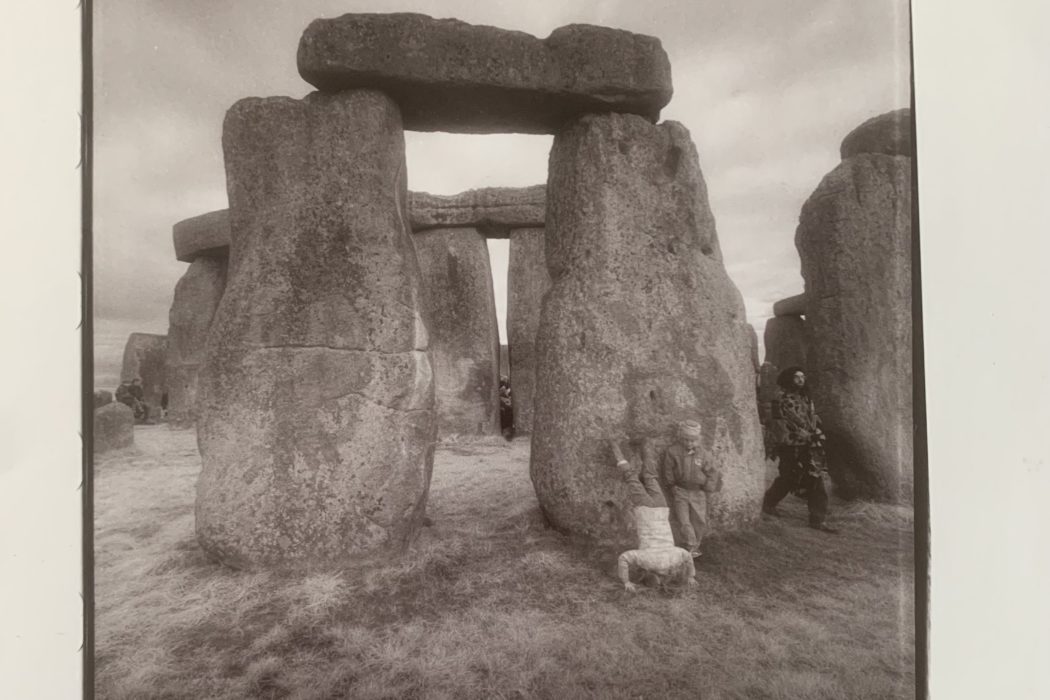 The year was 1989. George H. W. Bush had been elected President with 53.4 percent of the popular vote. The Exxon Valdez was spilling 11 million gallons of crude oil into the Prince William Sound. And I was in the back of my mother’s Mini Cooper, none the wiser to any of it. We had been bundled into the old Mini at horrendous o’clock in the morning by my dear mother, who was resolute in her intentions to make it into the stone circle before sunrise. But, even as a precocious six-year-old, I knew nothing of the politics and social battles that had raged for the past decade.

Stonehenge has been a Unesco World Heritage Site since 1986 –– and rightly so. It was purchased on 21 September 1915 by Cecil Chubb, who paid £6,600 for the monument at an auction in Salisbury, Wiltshire. It is believed that he did so on a whim. And having generously passed Stonehenge into public ownership in October 1918, Chubb was promptly given the title of Sir: First Baronet of Stonehenge. So, the stones were made available to all, for the princely sum of one shilling each per visit, in perpetuity. For anyone not aware, a shilling is about 5p adjusted for inflation today.

The Stonehenge Free Festival emerged in 1974, and by the 1980s was attracting up to 30,000 people. It had been a tribal route for 8,000 years up until 1985, when the legal team at Whitehead Vizard, acting on behalf of several governmental agencies and local landowners, secured a High Court injunction to prevent the annual Stonehenge Free Festival from taking place. Make no mistake, the ‘festivals’ and ‘raves’ that you attend in the new 20s have nothing on the Free Festival. Zip, nil, nada. It was totally and utterly unhinged. The Free Festival stood in technicolour contrast to the typical consumerist, status-driven, brand-saturated, optimised-for-your-convenience world.

Of course, this entirely hedonistic, non-establishment behaviour would all come crashing down on the heads of New Age Travellers and the like. Riot police secured the Stonehenge site on 1 June 1985 and refused access to anyone. Not surprisingly, this resulted in a full-scale battle, with eight police officers and 16 travellers being hospitalised. More than 500 travellers were also arrested. It was the largest mass arrest of civilians in English legal history. But I am not here to dwell on the past. Firstly, I wasn’t there. Secondly, apart from my mother, the only person I know who was is the founder and chief executive of renewable-energy company Ecotricity, Dale Vince.

My first visit to Stonehenge was on a frigid morning in 1989. A time when there were no fences, no security guards, and no facilities at all, other than a small car park. I faintly remember running around the sarsens and bluestones with my childhood friend, as druids recited prayers and shared food. Everyone was there to experience the time of death and rebirth, when the sun abandons the earth and the darkest day occurs. As a child, the enormity of Stonehenge both culturally and spiritually was entirely lost on me. All I have to remember those moments are two beautiful black and white photographs taken by a complete stranger. My mother –– always keen to befriend any waifs and strays –– had met a photographer from Mount Laurel, New Jersey. In between sharing stories, she had asked Bernard to take some candid photos of my school friend and I. Bernard, of course, obliged, wound up his 35mm and captured a handful of stills of two children happily playing amongst the 5000-year-old prehistoric monument. Rather impressively, a few months later, a package arrived in the post. Inside were a selection of black and white photos, exposed by Bernard in his New Jersey studio and kindly airmailed back across the pond.

So, when the prospect of visiting Stonehenge again arose, some 30 years later, I was always going to be in for a sizeable shock to the idyllic memories I had conjured. As we were lodging locally, we arrived promptly at 7am, as advised. The standard opening times are from 9.30am, FYI. I’m not sure what I expected, but it certainly wasn’t a £27m visitors centre designed by Denton Corker Marshall. Arguably the site needed some form of crowd control as last year over 1.5 million people visited Stonehenge. That’s 4,100 men, women, children, OAPs, and coaches filled to the brim with insipid tourists every day. I am not entirely averse to mass tourism; I still want to see all the sights, but ideally under the cover of darkness with a moratorium on movement.

As I pulled into the centre on the old A344, I was met by a sturdy yet half-open gate with a Vauxhall Astra parked alongside and no signs of life. I pulled forward into the car park only to clock a chap in a hi-vis jacket in my rearview mirror, waving his arms as if preparing for take-off. I reversed gently and put down my window. “Did you see the gate was closed,” the rather irate man barked.

“Closed is a binary state, as you can see by the cars waiting behind me that have gone through the very open gate.”

“Is he always like this?” the man asked my passenger.

We’ll park that story there, other than to say, any public-facing organisation should put the front-of-house staff at the front, and anyone with the bedside manner of a Baldwin brother, in solitary.

The visitors centre houses multiple museum exhibitions, a 360-degree experience, café, and of course a gift shop. Given the early entrance time though, all but the cafe and gift shop we’re yet to open. This is because there are two types of Stonehenge ticket. The standard allows you to walk around the stone circle on a path from a distance of ten metres at its closest. If you’ve never walked amongst the stones, you wouldn’t know any better, and this will certainly suffice. The circle access pass allows you to do what people had been doing since 3000 B.C. and actually walk amongst the great neolithic monuments. As long as you sign the terms and conditions sheet and agree not to fornicate, film, or flagellate near one of them.

Upon arriving at the circle, which is a short walk or bus ride down the now-closed A344, we were given a brief safety and security talk by a member of the security team. It was confirmed there would be no touching the stones, no licking the stones, no playing with crayons or throwing food. Any of these would result in everyone being sent to bed without supper. I entirely understand the need to secure these ancient monuments and preserve them for another 5000 years, but I recognised half the security team as ex-doormen from local Wiltshire nightclubs. Perhaps we could secure the site with a little more humility?

None of this stopped me sitting cross-legged like a poor man’s guru in the stone circle and listening to the group of druids hold their ceremony though. To say the experience was moving is a grave understatement. I believe that the stone circle holds great power. There, I said it. ‘Witch,’ you cry. It might not manifest itself in a real-world way of understanding, but there is something there. It could have been the 30-plus years that had passed since I visited with my mother, but I sat quietly and had a small, noble, man-cry. All the while, the 20 other people in the group were moving freely amongst the stones, equally moved. Many embraced, sang songs and watched on as the group of druids formed a circle and began chanting.

Some took selfies and live-streamed –– but hey, you can’t kill all the enemies of civility, who would populate social media? For me, it was one of the most spiritually enriching moments of the year. To think that only small groups are able to walk amongst the stones with pre-booking makes it a little bittersweet. Though, once I was physically in the circle, everything else became white noise. The miserable security chap at the gate, the burly ex-doormen manning the site, everything started to fade out leaving an unfathomable sense of deep calm for the next 40 minutes.

Make the journey. No matter where you are from, no matter how far. Eat the entry fee that should be a shilling, accept being distanced from the stones by bouncers. But go. Stonehenge is an experience beyond parallel.

MENTAL HEALTH FOR THE MODERN AGE

Playing National League rugby on that fateful Saturday, the imposing second rower launched himself into a tackle, as he’d done a thousand times before. On this occasion, though, a sudden change of direction by the opponent meant James’ neck was badly impacted in the collision.