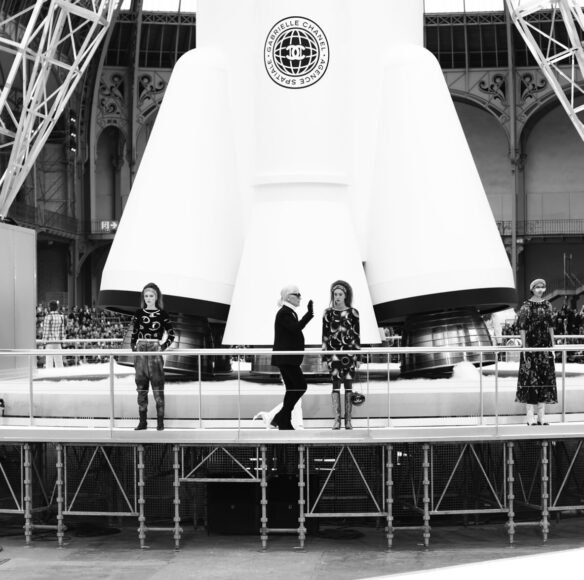 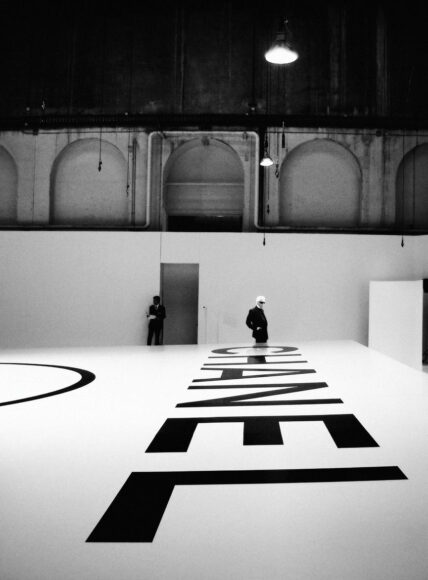 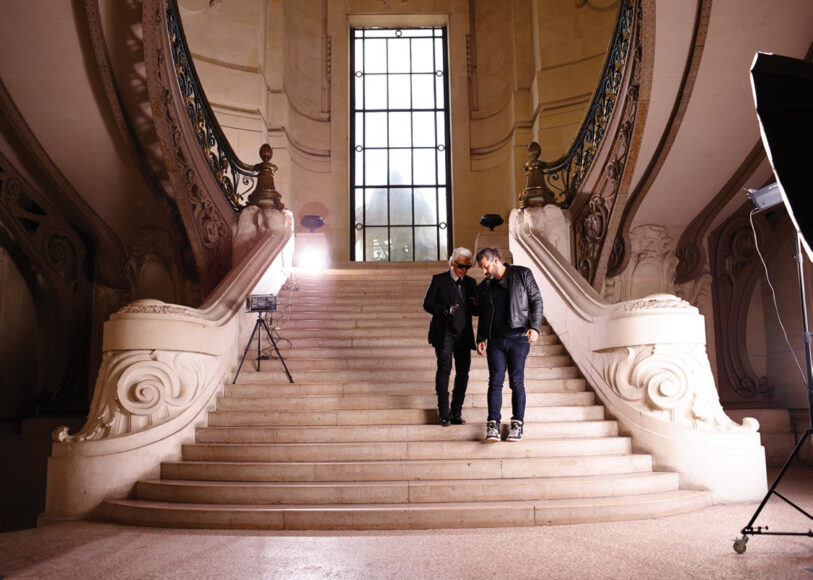 I was just barely getting by, working an office job in Paris, when by chance I met James Kaliardos. I didn’t know who he was, but we quickly became friends. Turns out James is a renowned makeup artist and one of the founders of the legendary New York fashion magazine V. He and one of the other founders, Stephen Gan, had an idea to shoot a fashion show from up on a roof. It was a bit unusual and none of their regular photographers were that interested. I had never been to a fashion show and thought it sounded like fun.

Words and Photography by Simon Procter.

I’d recently bought a very old dusty Mamiya Universal Press Rangefinder camera from eBay, with the optional 6×9 back – a huge, heavy thing that had been state of the art in the late 1970s. I’d also managed to track down the mythical 75mm f/5.6 Biotar lense. Though outdated, this lense is still considered one of the sharpest ever made. But in the early 2000s, people were basically giving them away. And by the time of the shoot, I had almost figured out how it all worked. Firemen and security helped me climb up a rickety walkway to a roof far above the show. In the front row were Karl Lagerfeld, Yoko Ono, Elton John, Kate Moss, and a dozen other people I had only ever seen before in magazines. I knew this was a chance. I shot everything in as many ways as I could think of doing.

When I got all the films back and scanned, I spent a very long week putting it all back together, to make one single picture. I combined moments, I combined exposures, things that were invisible I made visible. I stitched shots together to make an impossible perspective and then worked some more to make it almost believable. At the end of the week, I sent it to Stephen and James in New York. I was exhausted.

The next day they sent me to the Milan fashion shows and then on to New York. They printed the story across ten huge pages. The New York Times called me the day it came out and commissioned a three-day studio shoot (even though I had never been in a photo studio before). Later Nike called, then Nokia, and we went around the world shooting amazing things and meeting amazing people. But whenever I had a little time, I would shoot a few Paris fashion shows, almost always Chanel, and I always sent the pictures to Stephen and James. 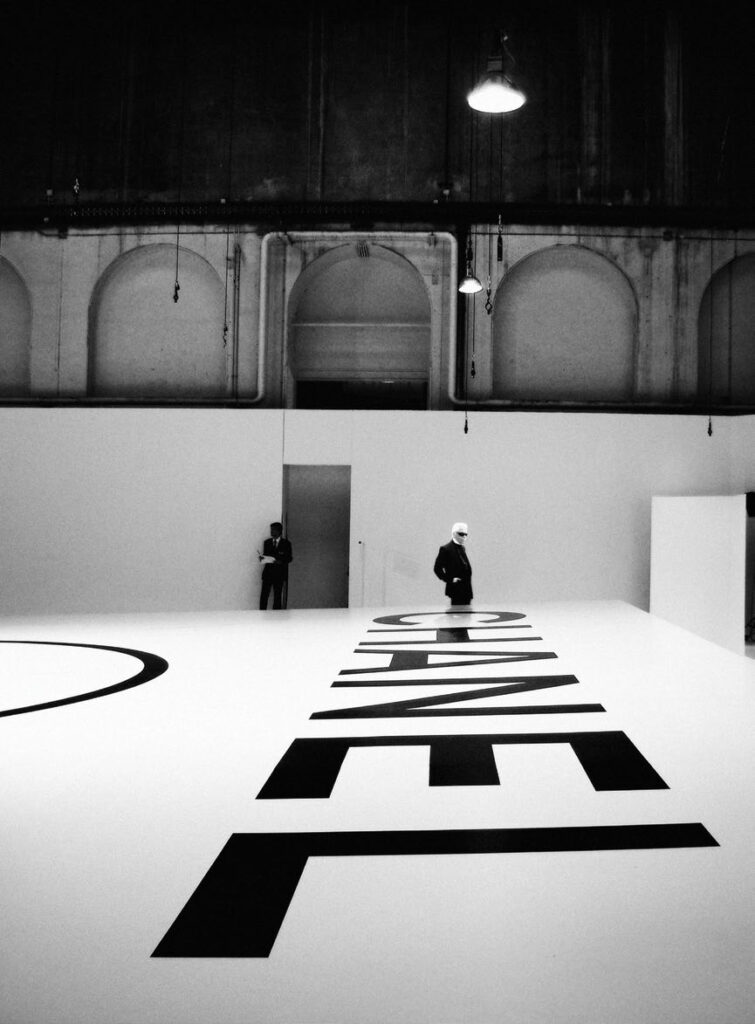 I met Karl Lagerfeld for the first time in 2006 because (again) of Stephen and James. Harper’s Bazaar had commissioned me to shoot his portrait in various iconic New York locations. It was very nerve-racking; there were a lot of models and a lot that could go wrong. We knew Karl had been working all night and it was not even sure if he would turn up. We set up on the roof of a skyscraper waiting nervously and then he arrived. He greeted every single person and made most of them laugh. And then spoke very quietly to me alone. He told me that I should not worry and that he would do whatever I asked—that it was only my vision that mattered. It was an amazing day. The last shot was in Times Square, it was a great feeling; we knew we had done a great shoot and everyone was laughing. I felt like I was drunk. A lot of people had surrounded the shoot to see Karl and the ten beautiful models. More and more people kept coming to see and eventually we had completely blocked Times Square. 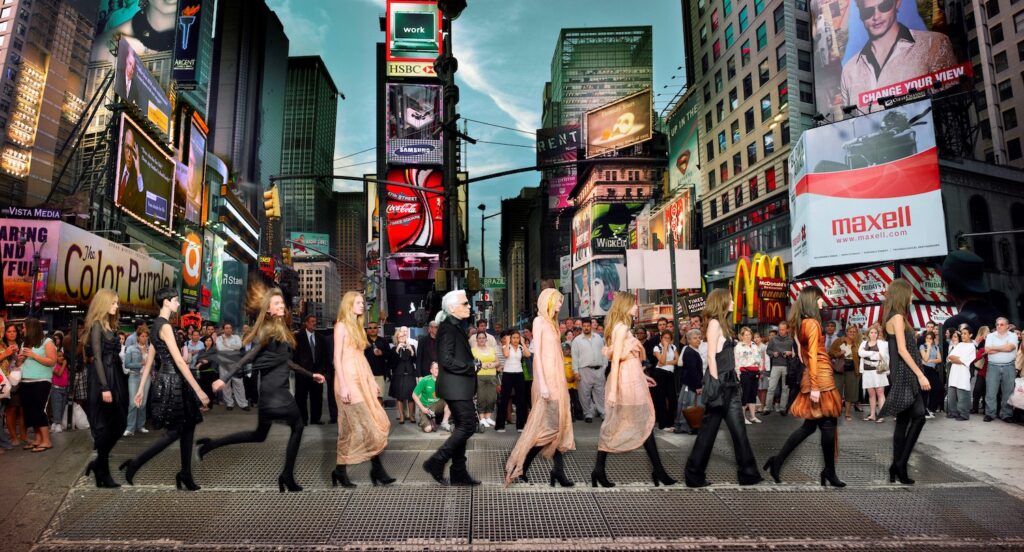 A few years later I had the idea for this book and James arranged for me to meet Karl in his Paris atelier. The place was filled with people—his closest creative collaborators—all of whom looked absolutely delighted to be there. It felt like a party and it was very exciting. Karl was doing a photoshoot at the same time as a hundred other things. Michel Gaubert (sound designer for pretty much every fashion show) was there showing someone how to use their iPod. I saw Karl pause and put down his camera and immediately three people held out dictaphones, he then spoke to them in three different languages, before whirling off to do something else. After a while he came to me to discuss the project. I had prepared a presentation of the book, but Karl just waved it aside:

“I don’t need to see, I know all of the works, they are wonderful, your work is wonderful, the book will be wonderful.” 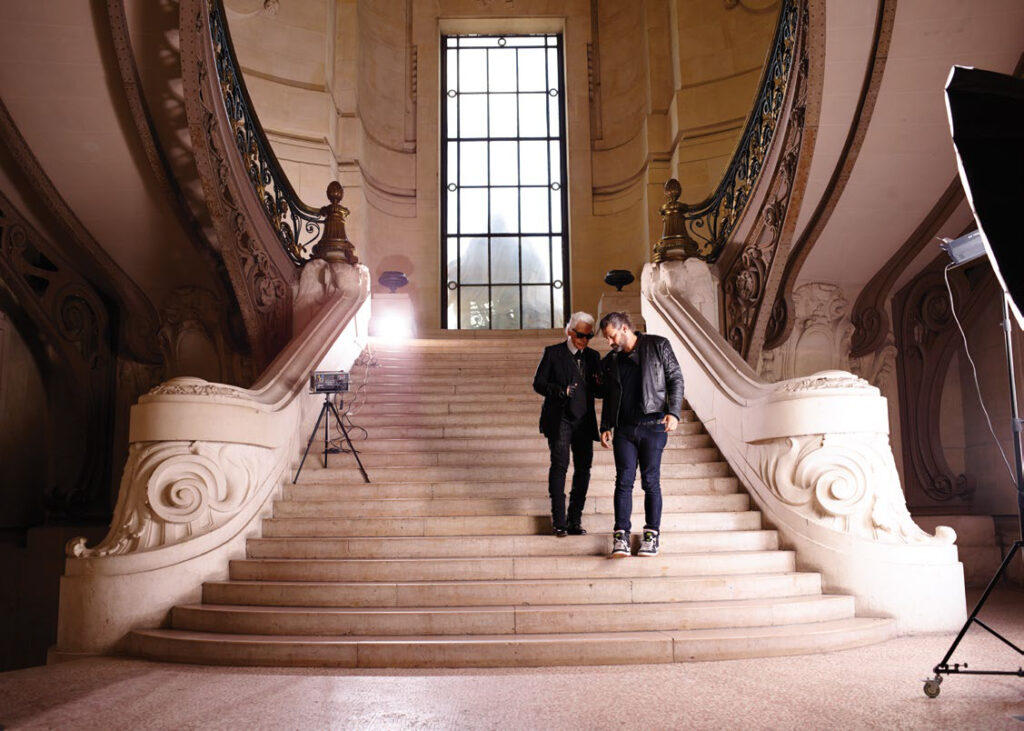 I was lucky enough to meet him many times over the years; it was always a delight and we always did great work. The two things I remember most were that he always personally greeted everyone in the room. The other, that he was very very funny. Many times whoever was standing next to him could be seen giggling uncontrollably over something he had whispered to them.

Karl Lagerfeld worked very hard for a long time and dwelled rarely on the past. He made people laugh and was polite to the point of graciousness. I think we can all learn something from that.

I couldn’t stop smiling the first time I saw the rocket. It was just so much fun. And so very impressive – an extraordinarily realistic space rocket almost touching the roof of the Grand Palais. It was also brilliant how they produced the show. To give the illusion of a flight launch, the fins at the base slid up the body of the rocket in a cloud of smoke and sparks. It was just fantastic! The original artwork became really popular with art collectors all around the world. I decided to take it further and produced another version that incorporated actual footage from the real NASA rocket launches. 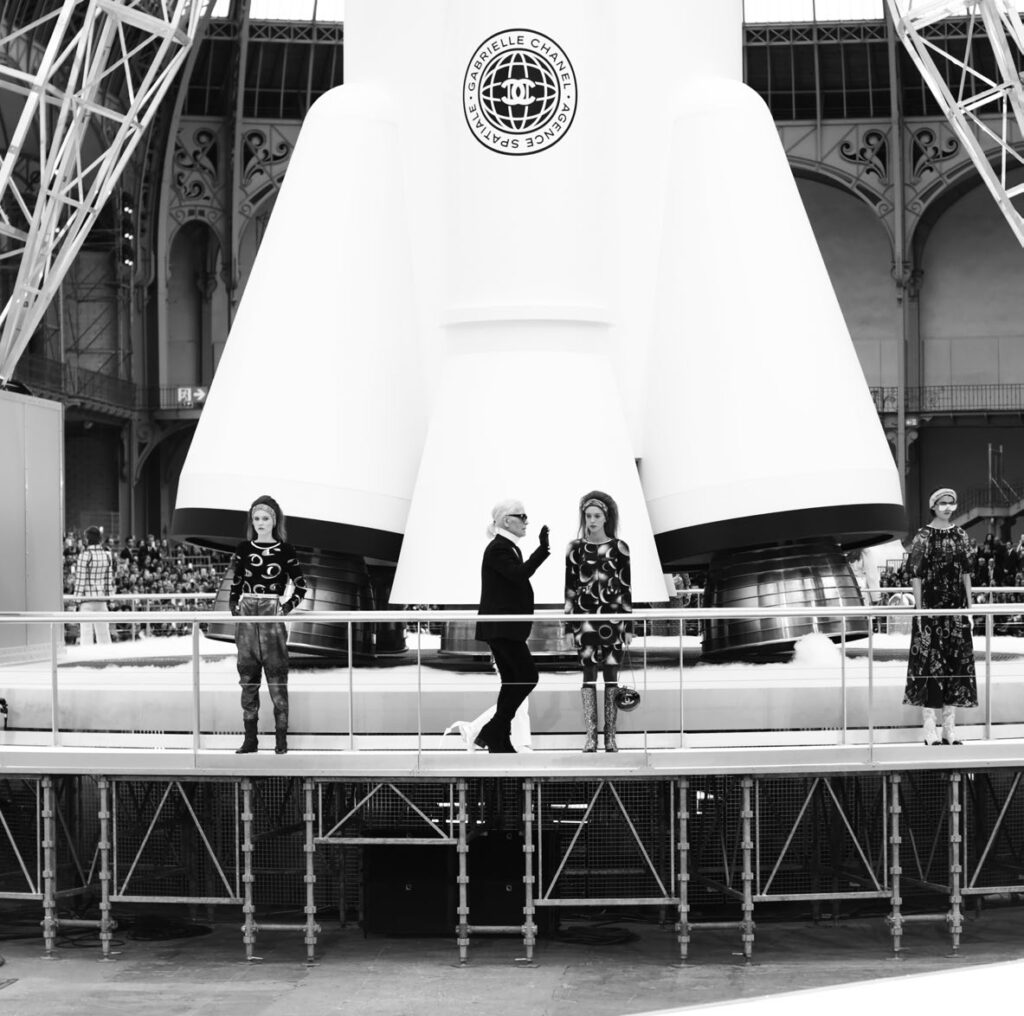 Chanel used their HQ as the venue for the show. A much smaller space than usual and, as such, a much more chaotic scene than usual. I managed to stake out a position to the right of the main group of photographers that I thought could work really well for the shot. And then I waited. Normally at a fashion show two enclosed and strictly secured areas are designated for the photographers, these are called the “podium” (regardless of whether or not it is an actual podium). Often, for what I try to achieve, it’s not the best position and I have been very fortunate over the years to have been given very special access to choose the place I want. This is no small thing for Chanel to do, as their shows are huge and immensely complex to run (and as a rule, photographers are a nightmare). Sometimes confusion about who is allowed where and to do what can creep in. 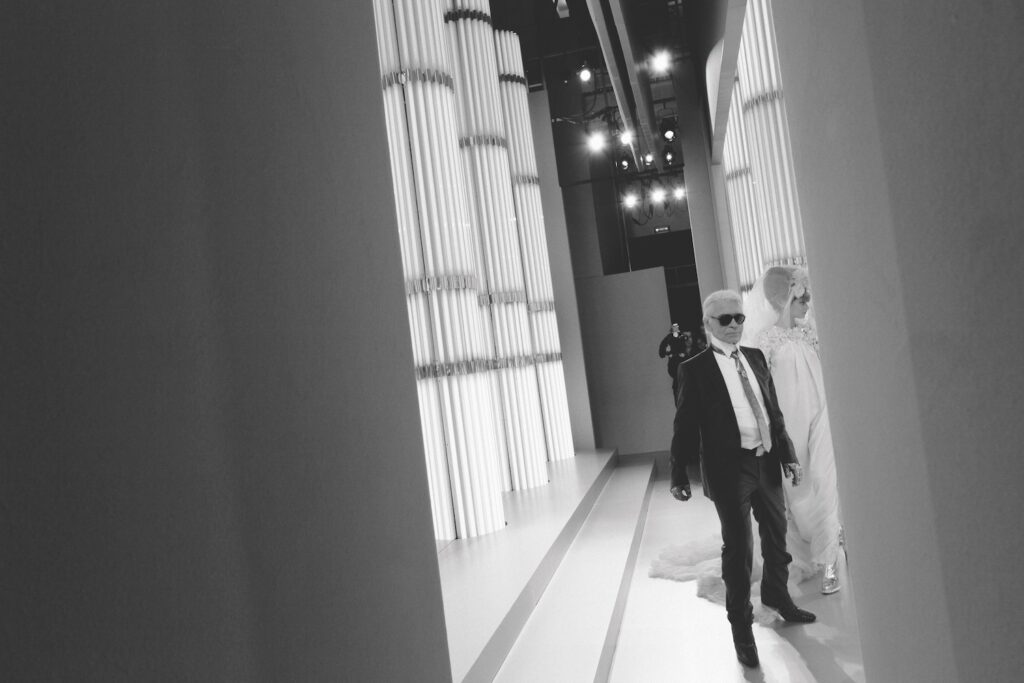 Just as the show looked like it would begin, someone with a microphone headset ran up and started shouting my name. My heart dropped. My first thought was that there was some problem with my access and I was about to be removed from the show. I raised my hand, slightly reluctantly. “Quickly, quickly, Karl is asking for you.”

To my left, fifty fashion show photographers gave me a combined dirty look. I can’t lie, it was brilliant.

I was led through a heavily protected door to the backstage. Everything here was different. It was quieter, as everyone was busy doing something, and surprisingly serene. The space was pretty tight, filled with people working very closely together. Beautiful models wearing huge heels and over a foot of hair towered over everyone. Stylists and make up artists picked at them, the show was seconds away from starting.

Karl came through the happy throng and greeted me warmly. And as he took my hand it was one of the strangest experiences of my life, everyone in that small space seemed to turn and smile lovingly at me for the longest time. Then Karl started to explain to me his concepts for the show. I was starting to freak out a little – the show was seconds from starting. How would I be able to make it back to my original position? Did everyone really love me? Was Karl expecting me to give feedback on his artistic choices? Did I have the right lens on the camera?

“Come,” said Karl, as he led me right up the show’s runway entrance. I was almost in the show. “I really think this would be the best position to shoot from,” said Karl. And he was right. 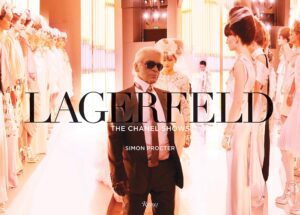 Lagerfeld The CHANEL shows is available here via Karl.com

Britain Britain Britain, with our inconsistent weather, flash showers and snow drifts, is it any wonder some of us play it safe during Apirl. Fear not, Holland Cooper have some wax saviours for all. The Classic Cape and Wax and Leather Wrap The Windsor Jacket A style that exhudes Britishness, our military inspired jacket is bold and sleek.  Its lightweight and will make any outfit look polished – whether you have it fastened or have it thrown over your shoulders. Tweed and Fur Wrap A silhouette that suits everyone, and a perfect fit every time – the tweed and fur wrap makes any outfit instantly glamorous, but can also be dressed…