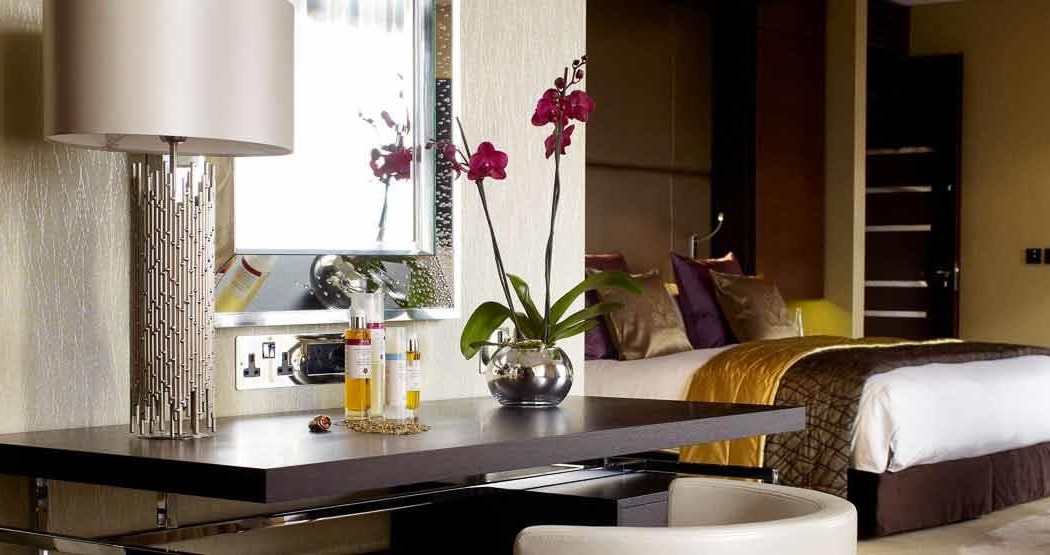 When you park your marque in the Jumeirah Carlton Tower’s underground bunker, you pass Phantom nestled next to Ferrari, tucked in beside Aston. It might as well be a private car club. In hindsight, we probably should have let the concierge park our pool car though. However, at the time, a white Ferrari FF was arriving with the usual pomp and ceremony from a well-honed door staff. This is Kensington at its most seductive.

The gold gilt and mahogany lobby is refined and unassuming, the staff polite and courteous, with personality too. This makes a change from the usual robotic gofers you find at many London hotels.

Having checked in, we were shown to our suite. I do like a good enclave when staying in central London. The bustle can be quite imposing, especially at rush hour and during the run up to Christmas. People tend to become feral whilst tearing each other to pieces in Harrods. Of course, at the Jumeirah, you can just have it delivered to your suite. This is exactly what we had in mind, as a selection of previously selected pieces arrived via courier. When in Rome.

The hotel houses 216 rooms, 58 suites, a bar, the Rib Room restaurant manned by Chef Ian Rudge, and serves afternoon tea created by eminent pastry chef Eric Lanlard. A full health spa is also housed in the 18 floor monolith. Add to that a gym with the best view in London (nine stories up) and the Jumeirah is a residence with a lot to offer.

It sits like a garden ornament on Sloane Street overlooking Cadogan Place and is a stone’s throw from the Danish and Icelandic embassies. If you’re in London to shop, the Jumeirah is a great choice. Prada, Burberry, Dior and Chanel are all close enough to lean from your suite and lob a fifty at.

Once I had stowed our new clobber in the walk-in wardrobe, I was pleased to find a decent desk to work from. So often I find myself hunched over a regency block with no thought to working posture. If you’re going to be in central London for a few days, chances are you will need to check in with the office. God knows nothing works without you of course.

After a relaxing lounge in the suite, we were dressed for dinner and with a wave from the doorman, a black cab stood at our feet. I come to London a few times a month. I see the same doorman at the Jumeirah every time I go past and I’m always impressed that the hotel has staff longevity. It shows depth of commercial character when an establishment has the foresight to ensure that it courts its best staff.

Some four hours later, we arrived back at the hotel on foot. Apparently, some more garments had arrived for us and the staff had kindly organised them in the room.

Moments after dropping my keys and wallet on the bedside table and brushing my teeth in the fine marble bathroom, I donned a heavy thread robe and headed for REM.

This will seem like fine detail, but curtains that close properly are important, otherwise you will wake from your slumber to that thin stream of light intruding on your downtime. Once you have gotten to your feet and tugged hard enough, it’s shut out, but by that point it is too late, your brain is on its first thought and it is hard to shake it. At the Jumeirah, the bedroom was shrouded in darkness – perfection for a night owl like myself.

After an invigorating shower, I heard a knock at the door. It was breakfast. In our slightly inebriated state, we had chosen to have breakfast in the suite and used the self-service menu before promptly hanging it outside the door. This resulted in the delivery of all manner of delicacies. Eggs benedict, pastries and of course a decent English breakfast. Luckily we would be joined by our friend, Catherine, who would helpfully polish off several cups of fresh coffee along with a handful of pastries. Breakfast is best enjoyed in one’s own company with a crisp copy of the Sunday paper. Too often are we forced to hoover something tasteless whilst flicking through BBC News on our way to the office. A lazy Sunday breakfast is something of a treat in my house and ever more so when taken at the Jumeirah.

Realising we were running out of precious time before check out, we decided to take our bags to the car before taking a trip to the hotel’s spa. With square footage in central London at a three blood diamonds and two tons of timber per square foot, I didn’t expect a pool with enough length for a proper session. I was wrong; formal apology submitted. I grabbed the entire rack of Sunday papers and headed for a lounger.

The Jumeirah is a hotel gunning for establishment status like that of the London Big Three. Mark my words, it will get there.

Charming, Erudite and a seasoned rainmaker, it doesn’t take long to realise why Iain Tait is heading up the Private Investment Office at London & Capital.  Tait founded his own wealth management firm after getting his Economics degree in 1996 and becoming a partner at Farmer Anderson and Co. He joined London & Capital in 2006, becoming a partner and is in many respects the heir apparent.  Iain sat down with Peter Robinson at their Fitzrovia office to talk investment strategy, entrepreneurial investment and what London & Capital is doing to engage the next generation of investors. What does an average working day look like for Iain Tait? Do you start…