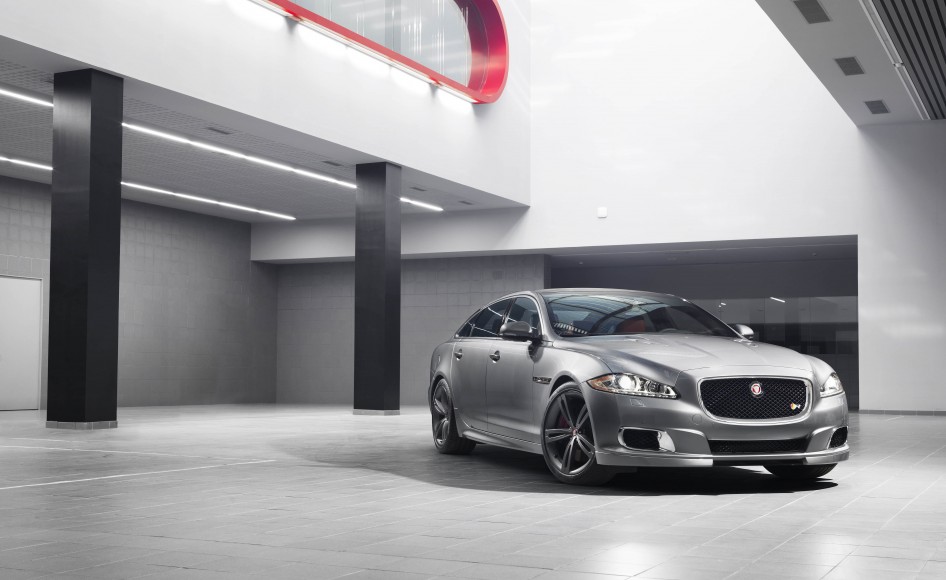 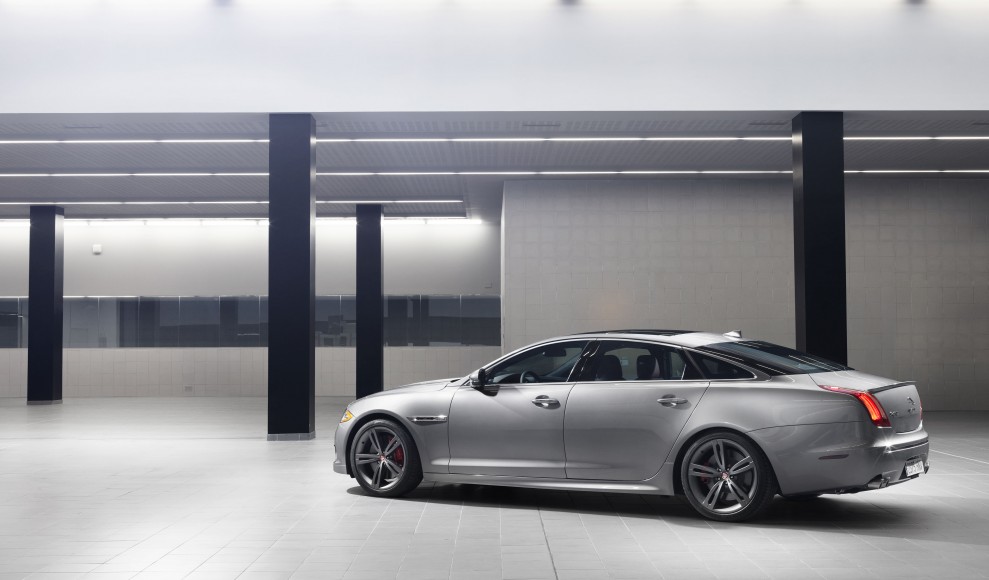 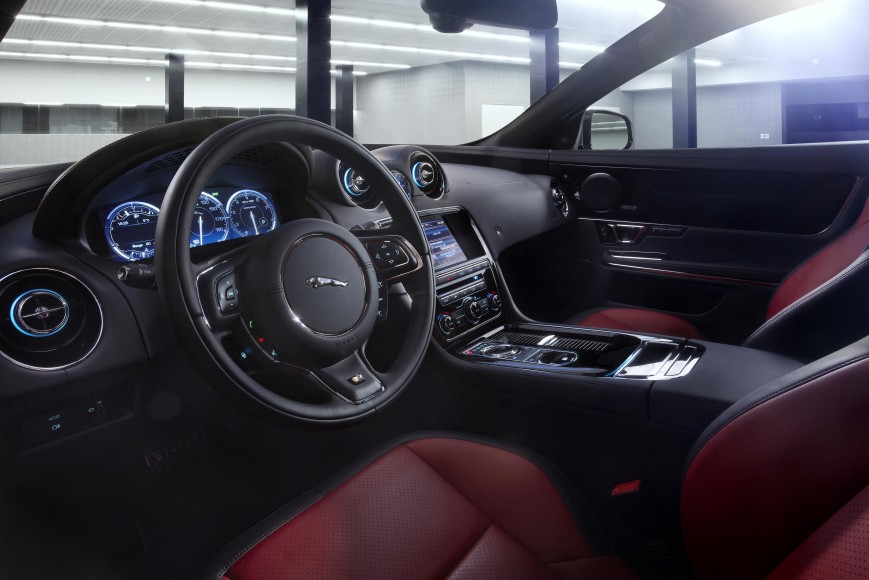 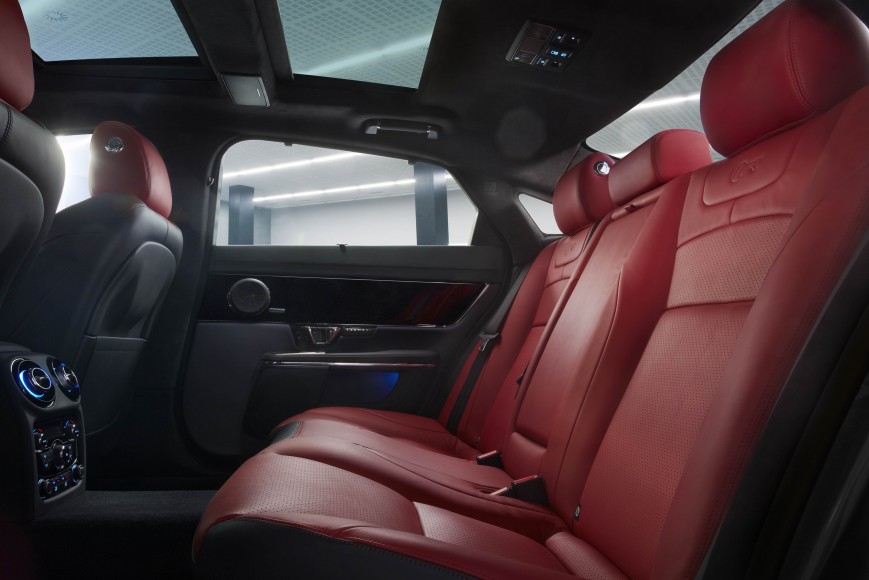 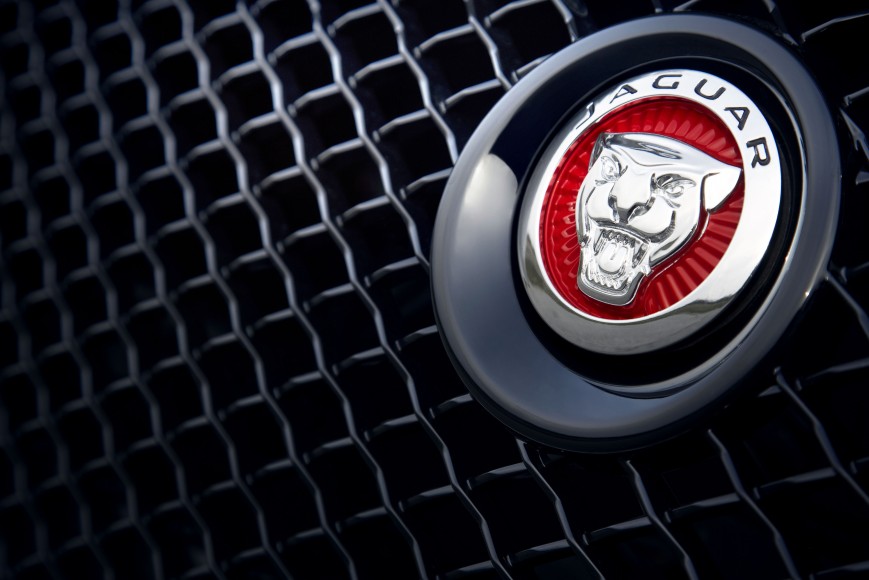 As it comes sweeping into the car park, I ask myself if the XJR really is the short wheelbase. It is, but it also looks massive. Looking similar to a pissed-off battleship, this car says, ‘Yes, I own the company and, yes, I have no qualms about my source of income. Kalashnikov anyone?’

Jaguar have tried very hard to shake off the Brummie pub landlord image of the Jaguar XJ, and I can say, if you still think that, the new XJR will metaphorically smash a pool cue in half whilst striding towards you with a fixed stare, wearing the sharpest suit you have ever seen. Respect it.

First impressions sitting at the helm (this is way more than a car) are that inside it feels snug, not small or cramped, but it lacks the airy feel that you would expect. This deception in size, however, comes in very handy – more on that later.

My travels for the weekend take me from the Cotswolds to Hampshire and back into Bristol, so an even experience of what it’s like on most roads. The first tick in the box is from my other half, who immediately asks. “Ooh, what’s this, it’s lovely”. A far more positive reaction than her ‘observation’ of “Looks a bit chivvy,” when referring to the F-Type. Perhaps an ungrounded opinion – however, deep-down, we all care what the girls think.

With a supercharged 5.0L normally aspirated V8 producing a lofty 550bhp (when I was a nipper, 100bhp per litre was a big deal) and almost 2 tons of leather and aluminium, this car really is a luxo-barge worthy of that R badge on its flanks. Acceleration is crass. Therefore, when you kick down the XJR, the car doesn’t accelerate, it seems to engage some form of hyper drive that surges you forward at an incredible rate, whilst making a soul-stirring rumble. Nothing less than warp factor.

Going back to the cabin size, the XJR is very clever in that the rear seats provide plenty of space for six-foot-plus adults to lounge in comfort, but up on the bridge, you feel like you are in a sporty saloon – great for whistling across the country flipping up and down on the paddles. This illusion is only shattered when you try and slow the car down from high speed on A or B roads. No disrespect to the braking or suspension set-up (which happens to be beautifully done), it’s simply a case of physics.

The in-car menus and eletrickery are very well done. Aimed at the more no-nonsense user (no one said elderly), the sat-nav, meridian stereo and climate options all work well, without making you feel like a luddite. No odd navigation or IT qualifications required (I’m looking at you, BMW).

Now, a gripe I have is less aimed at the Jaguar and more towards all of the modern luxury saloons: adaptive cruise control. This is a computer that allows you to set your speed and will adjust it accordingly. If, for example, someone in a topaz blue Skoda Yeti pulls into the outside lane doing 50mph, it will slam on the brakes and flash a red triangle on the dashboard, asking for driver intervention. This is thankfully a rare example. However, under normal cruising, it does get a little irritating. When someone pulls into your lane, travelling at less than your set speed, your car gently slows to maintain an even distance a long way away. Surely the whole point of these cars is that, once you have sold your latest consignment of slightly faulty landmines, you can then tailgate people all the way to your bank in Geneva. Yes, you could turn off the cruise control, but I don’t want tendonitis from holding my foot on the throttle for hours.

This minor whinge aside, for sheer road presence, build quality, power and looks, this car has all in abundance. It makes everything else feel a bit like a slightly shit toy. It also has something that German cars don’t: the leaping cat.

Britain is back with the XJR. Properly back.

Iain Beaumont is the founder and Managing Director of Venues and Ventures. Since ditching the City, Iain has worked on some on England’s grandest country estates and leading luxury venues, refining his eye for spotting new opportunities and helping businesses realise their potential.