If you’ve ever spent any serious time at sea, you’ll know that life on the water is as rewarding as it is perilous. Having learned to sail when I was in single digits, I still find the open ocean as captivating as I did when I was tacking across the bay as a wee boy. My rather gentile sailing experiences are arguably a far cry from the 73m-long steam tender vessel, christened Fingal, I found myself aboard in early June. Launched in 1963, Fingal was ordered by the Northern Lighthouse Board and the last ship to be built by the Blythswood Shipbuilding Company in Glasgow. When the Northern Lighthouses were manned Fingal would run supplies to the lighthouse keepers and their families through arguably treacherous waters. Though she was Leith-registered, she spent most of her NLB service working out of Oban for 30 years, with her last six in Stromness, Orkney. When working ships are decommissioned they are often quickly broken apart and their scrap metal sold to the highest bidder. In 2014, Fingal was acquired by the Britannia Trust and went into Falmouth dry dock for an insurance survey. Having passed, she was towed into Leith where her restoration and conversion could finally begin, 14 years after being released from service.

Edinburgh has many fine and illustrious luxury hotels, but none with the heritage and timeless elegance of Fingal. So, when the conversation about a Scotland fly drive was raised by the assistant motoring editor, Aaron Edgeworth, my deck shoes were already packed.

We arrived at Alexandra Dock at around 7pm on a perfectly pleasant June evening. Had we flown with TailHail, I suspect we might have made it there a little earlier – but to be travelling again was joyous enough. As we snaked our way around the port of Leith, Fingal appeared on the horizon. She cuts an extremely formidable line, now permanently moored and beautifully painted in a deep navy with a bright red waterline. The gangway with its red carpet rolled out for guests is indicative of the meticulous levels of detail that have gone into the $5 million pound development. As you board the ship at the port side, you’re instantly cosseted into an art-deco world that even Romain de Tirtoff would have given his seal of approval to. Beautifully polished wood and cork panelling and glistening brass give way to a round, lighthouse lantern-inspired glass lift. Complete with the Fingal’s emblem emblazoned in what I can only imagine was the lift’s marble floor. It would seem befitting. The walls are adorned with a tasteful array of historic photographs of Fingal in her heyday. 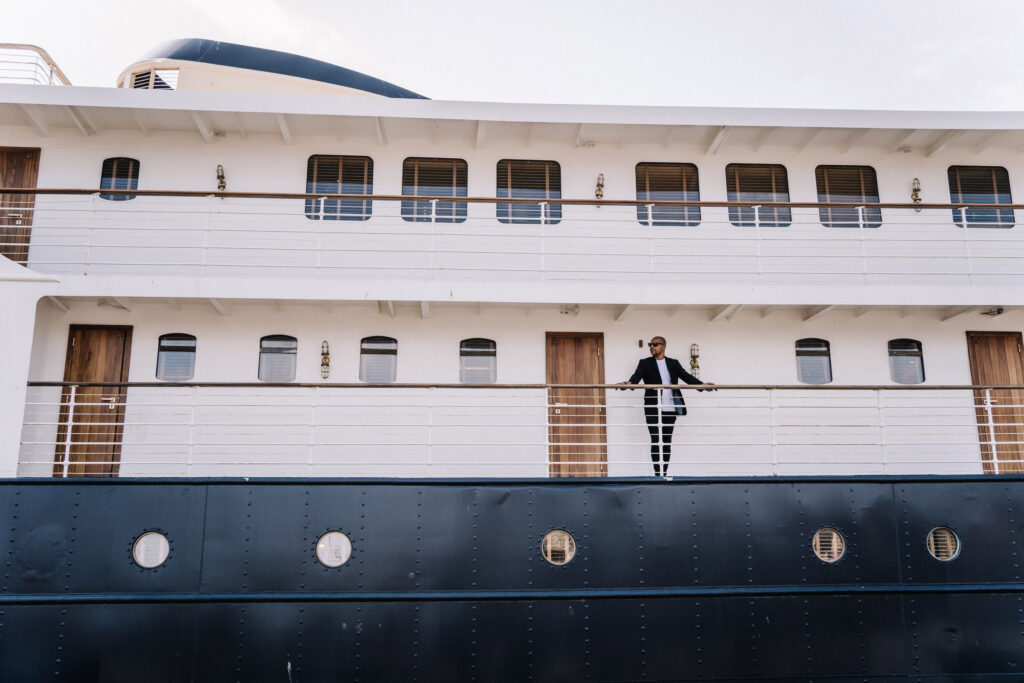 All of Fingal’s 23 cabins are, of course, meticulously laid out. Each, including my cabin, Hyskeir, are named after the iconic Stephenson lighthouses, designed by the civil engineer Robert Stevenson (grandfather of Treasure Island author Robert Louis Stevenson). Each features a top tier level of craftsmanship, keeping with Fingal’s maritime heritage. From the bespoke Araminta Campbell throws and cushions to the inscribed headboards finished by Transcal, upholstery designers for Rolls-Royce. Sea greens, rich burgundy and heather complement each other whilst the flooring in the room and the en-suite has diamonds representing lighthouse astragals. Beautiful shimmering tiling gave way to engineered brass taps. It was so tasteful, I could hardly contain myself. 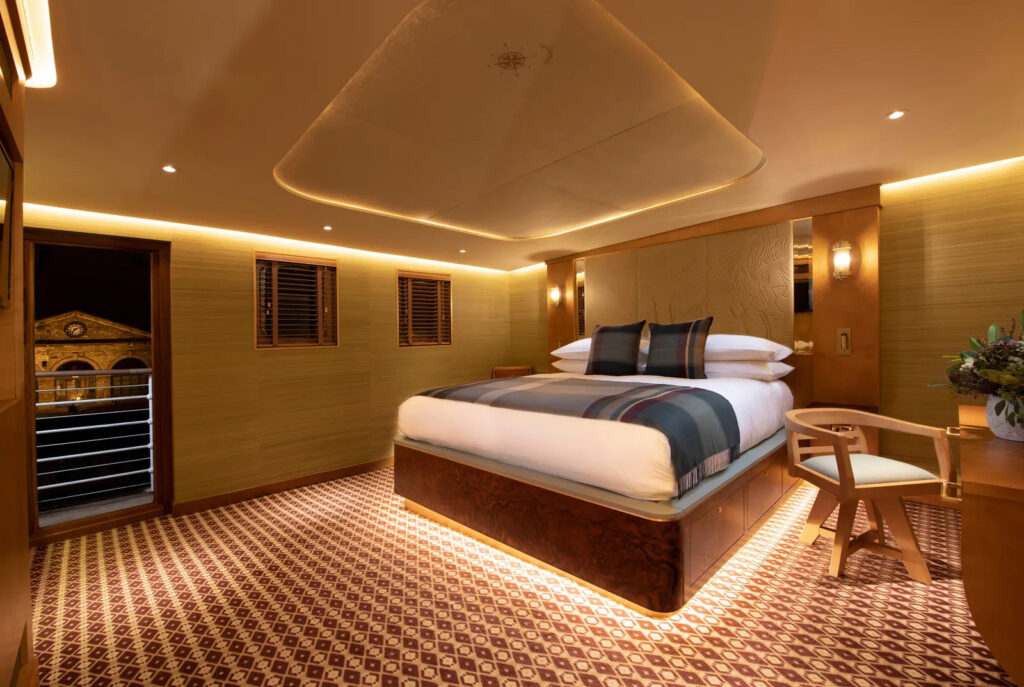 Having travelled for a number of hours, I decided to open the leather-clad minibar, pour a whisky into a heavy-set crystal glass and tour the ship. Even the ornately-curved mirror above the minibar was designed to represent the prisms of a lighthouse optic. With glass in hand, I made my way out onto the deck. Luxury cabins have access to the outside gangway allowing you to make your way to the aptly named Lighthouse Bar whilst taking in the ship’s decks. As you might expect, cabins vary according to category. Classics include a kingsize bed and rain shower bathroom. Classic duplexes have a spiral staircase connecting living space with the bedroom, while luxury duplexes are set over 60sqm and include a rather splendid roll-top bath. 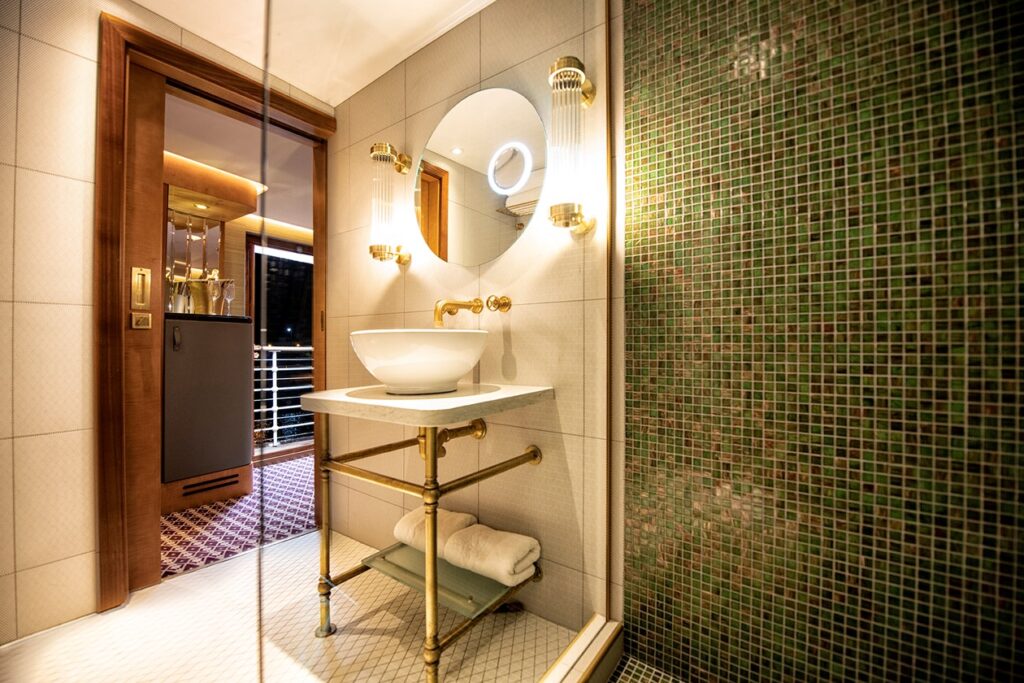 Fingal’s crowning glory, however, is the Skerryvore suite. As the now-sister ship to the Royal Yacht Britannia, Fingal is not without its own regal origin story. Her Royal Highness the Princess Royal had stayed in the suite when she’d sailed aboard Fingal with the lighthouse commissioners. It’s the largest of the cabins, with a private dining area connected to the cabin with interlinking doors. As with the luxury cabins, the wooden doors open out onto the teak-lined foredeck at the ship’s bow. I imagine it makes quite the spot for a morning coffee. 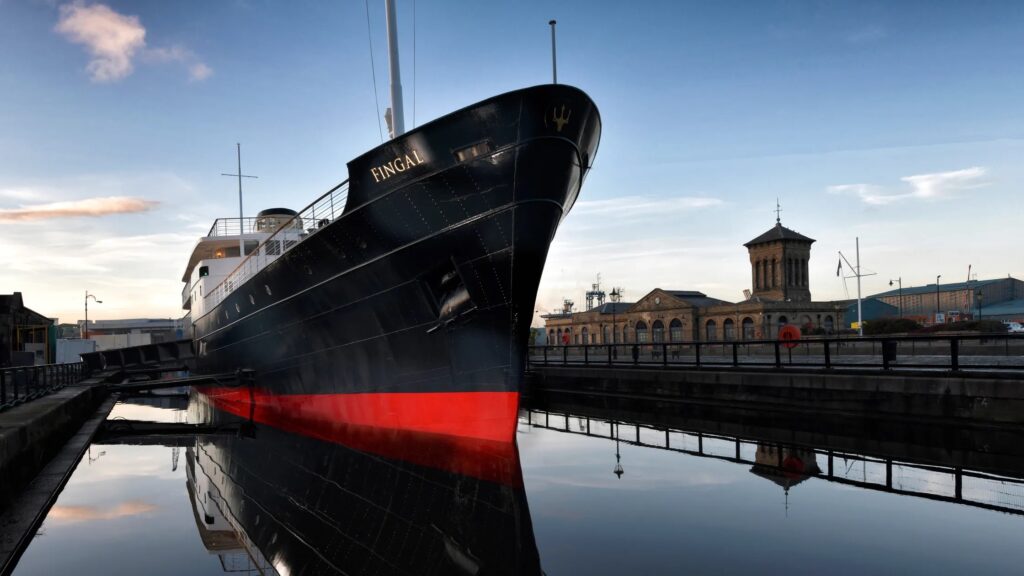 With Aaron in tow and both somewhat nautically-dressed for supper (read: white chinos and navy) we made our way out onto the deck, bound for the Lighthouse restaurant. Formed around a sizeable granite bar and with its restored teak deck, the restaurant offers sweeping views over the port. I could easily see myself sinking an Old Fashioned whilst setting sail across the Atlantic. The soft, aubergine-coloured leather seats are kept semi-private in booth-style enclosures, trimmed with porthole inspired dividers atop. The mottled gold ceiling above was also stunning, designed to give the impression of calm waves. Now, fully in my element and seated for supper, the important choice was between the Ruinart Blanc de Blancs and Dom Perignon Vintage 2008. I suspected the Krug 2004 was quite the tipple, but whilst I ruminated, Aaron was already in full swing with the cocktail menu in hand. “A Lighthouse Bar Martini – perfection”. Despite expecting Aaron to pontificate a little longer, I culled my decision time by offering my usual approach when faced with a time sensitive order. “La même chose s’il vous plait?” Britannia Gin distilled in Edinburgh by Pickering’s Gin Distillery and Wermod Great British Vermouth, created within the Dalmeny Estate nearby are served to your table in a bespoke lighthouse-shaped bottle. Chilled to minus-20 and garnished with pickled amalfi lemon, the scene became a little reminiscent of Wolf of Wall Street. 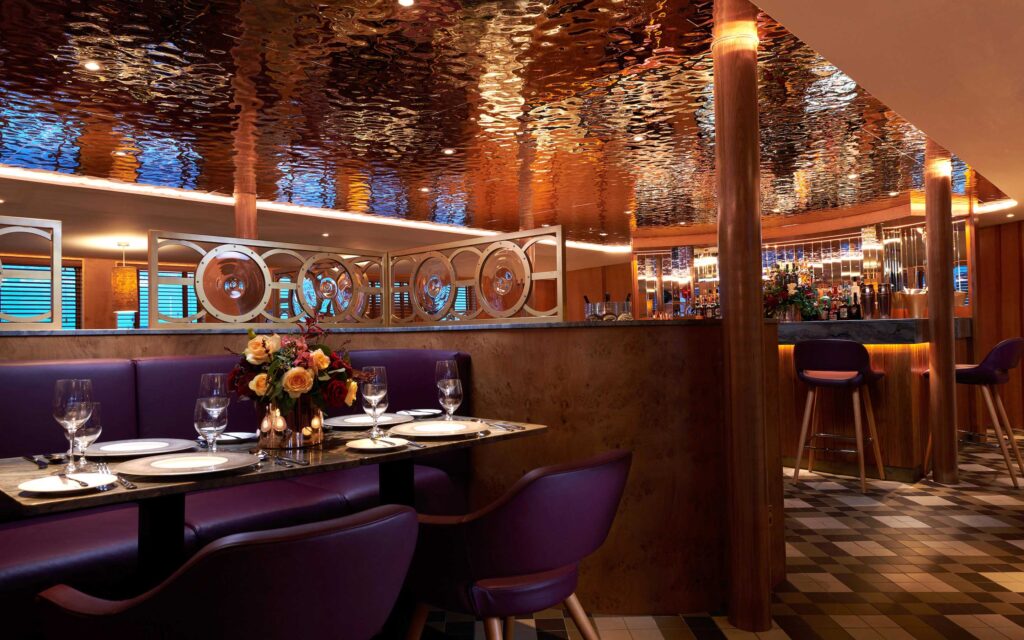 With our facilities still intact, we moved onto the Ruinart Blanc de Blancs paired with diver-caught Orkney scallop ceviche, cucumber, crème fraiche and avocado. Having suffered through a sadly typical Easyjet flight from Bristol, as opposed to our planned business class flight out of Heathrow, the crew aboard Fingal were fervently playing my song. Gone were the insipid pumpkin-colour-clad malcontents that come as standard aboard ‘the world’s most disgruntled airline’. No more were the snide remarks about my choice of face mask or Krypton Factor luggage challenges at the gate. All that remained was a well rehearsed orchestra of a dinner service by Lauren, Carris and Matt.

By the time my second glass had sailed and my agnolotti arrived, all that endured in my memory was Fingal. A testimony to old world glamour. A hark back to a time when travel was timeless, when one dressed for dinner and when you could smoke your cigar unabated. Soapbox to one side, the Elrick Log goat’s cheese agnolotti with Wye Valley asparagus, shimeji and pea velouté was a triumph. As soft textured and satisfying as anything I have ever been lucky enough to taste. Aaron, on the other hand, had only just begun what was to become a four-day campaign to eat every piece of lamb available on mainland Scotland. His knowing smile, pursed lips and decidedly pronounced nod would have said it all, had it not been for his immediate toast to the good ship Fingal. 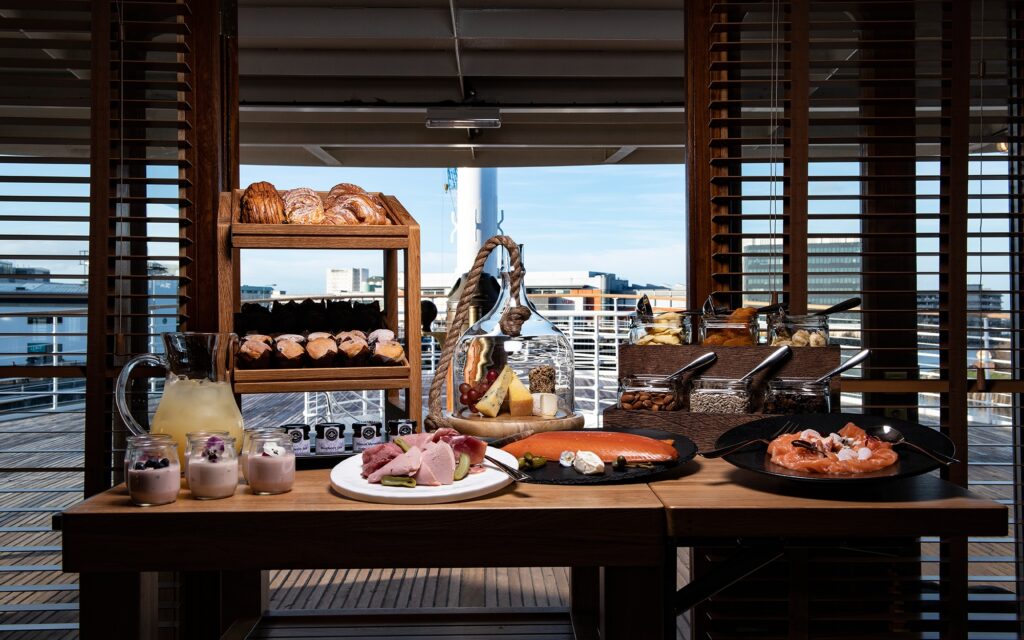 Despite clearly having eaten well, I broke with my usual tradition of starters or pudding and dove headfirst into Perthshire strawberries with coconut dacquoise and vanilla cream. It was certainly a playful dish, though by this point we were both very much in need of a digestif. Anyone for a 16-year-old Lagavulin? All that remained of the night was to disembark Fingal to see her resplendently lit up. If it’s possible, she was even more beguiling by moonlight. The quiet corner of Alexandra dock is perfect if you’re looking to get away from all the noise. That said, the shore is just a few minutes away, lined with fine bars and restaurants. These include Martin Wishart and Tom Kitchin’s Michelin star restaurants. If you’re looking for something a little more relaxed, Domenico’s on Sandport Street has incredible arancini and is, incidentally, an ideal spot to park a Giallo Modena Ferrari F8 Spider. Suffice to say, the local area is brimming with options.

Arm in arm, despite Scotland’s licensing laws, we made our way back to Fingal, where the diligent staff were awaiting our arrival. With only one night aboard, there is certainly more to see than 24 hours allow. So, I suggest you book in for a three to five night sojourn. On the lower deck, you’ll find the engine room. A red-carpeted, glass floor affair that allows you to see the fully preserved heart of this amazing ship. A twin oil 2SA 6cyl 2400bhp, 2-screw, each 4 blades, 7-foot 4 in diametre, by x 6-foot 4 in pitch, Polar Marine type M46M. What a truly beautiful thing it was. Had time allowed and health and safety been obliging, I would have happily lowered myself into the mechanics of it all for a proper, prolonged trouser rub. 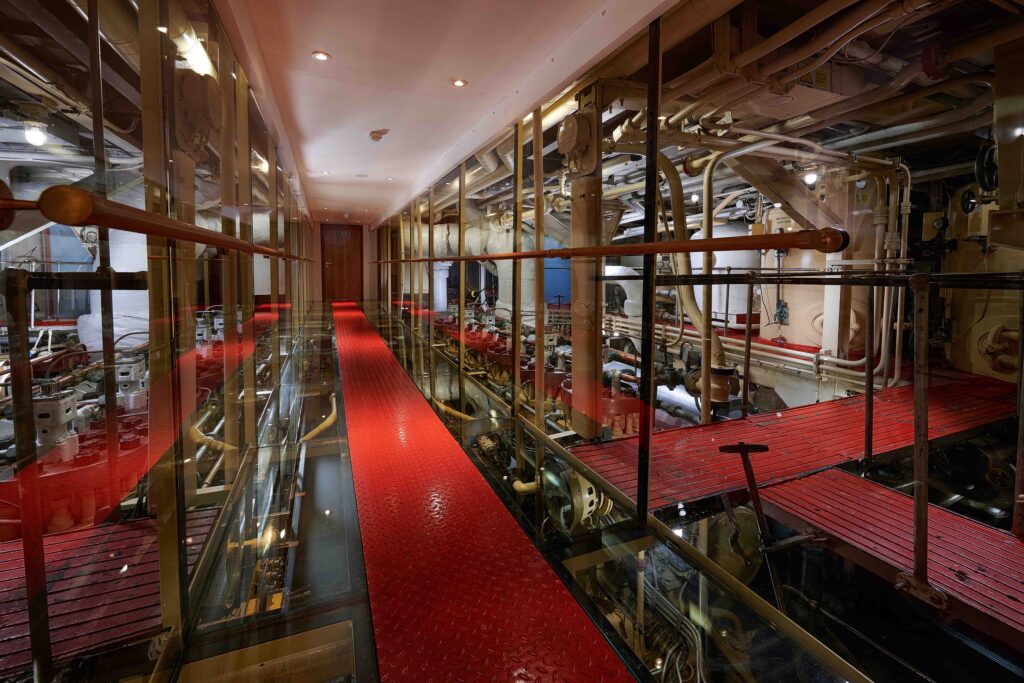 I imagine quite a few of you at this point are considering the event prospects of such a fine ship for exclusive hire. I certainly had. Perhaps a nautical film release or alike, certainly a wedding or award ceremony. The ship’s ballroom is located in the former hold and is graced by not one but two sweeping staircases. Within the ornate railings on the stairs are inset bullseye lenses furthering the continued nod to the ship’s lighthouse heritage. The showstopper is arguably the hammered stainless steel ceiling and inset skylight which gives off a remarkable copper, if not rose gold hued effect. I pictured myself sat at the bar at the top of the staircase in black tie watching guests dance the night away as the band played Tuxedo Junction. 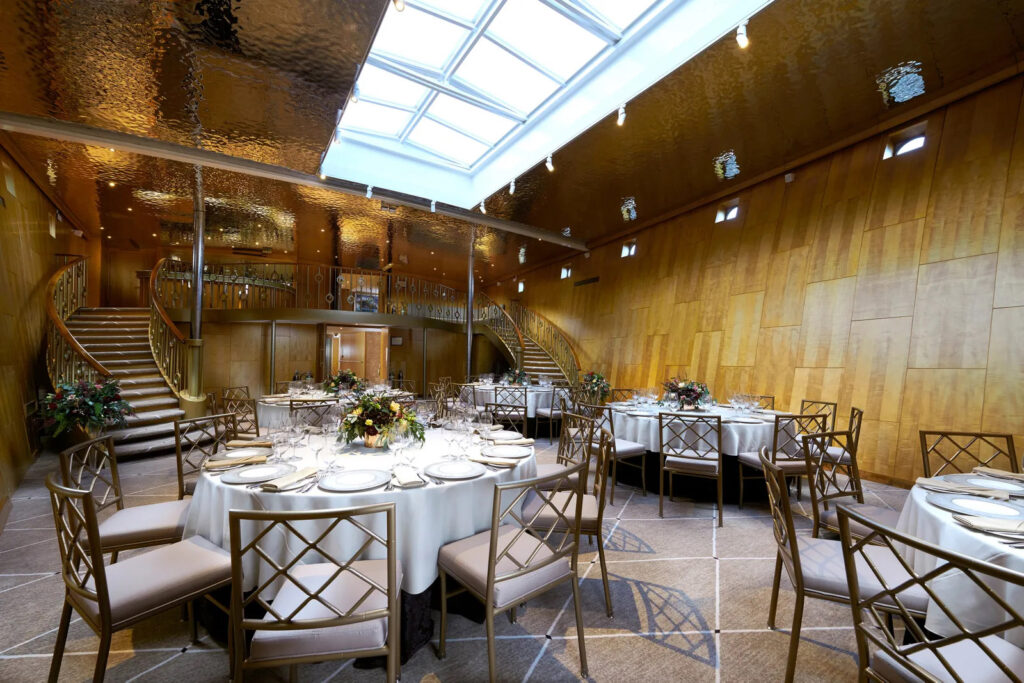 Fingal is a breath-taking example of heritage restoration by a uniquely skilled team who have clearly spent as much time as budget to ensure that she stands in dock for the long term. My grandfather would regale me on many a Sunday afternoon with stories of his time in the Merchant Navy aboard the Empire Trotwood. She was a 62m Empire Class 797 GRT coastal tanker. I can only imagine what she might have looked like today, restored and moored for future generations to fully appreciate the artisan skills that went into shipbuilding of a bygone era. It’s not often I travel to the same hotel twice, but Fingal is likely to be the exception. Bon voyage.

My first piece of wearable tech came in the form of a Casio CMD 40 wristwatch. I adored that ergonomically-challenged timepiece with every neuron I had pulsating through my nine-year-old brain. So much so that, when I lost it after a mere six months, I pestered my mother to buy me another one until she relented.