It had been almost a decade since I strapped into a Ferrari for anything other than a brisk weekend jaunt. In reverse order, The Ferrari 488 Pista in San Francisco, the F12 Berlinetta and GTC4Lusso in Vancouver, and the 2012 California 30 in the Loire Valley. Considering the amount of time and craftsmanship that goes into fettling a Ferrari to life, 48 hours seems like an affront to the great and the good in Maranello. Not wanting to appear obtuse, I boarded the earliest train from Cheltenham bound for the ‘Welsh Riviera’ to seek out the Ferrari Portofino. Ideally to ‘take her a prize’. 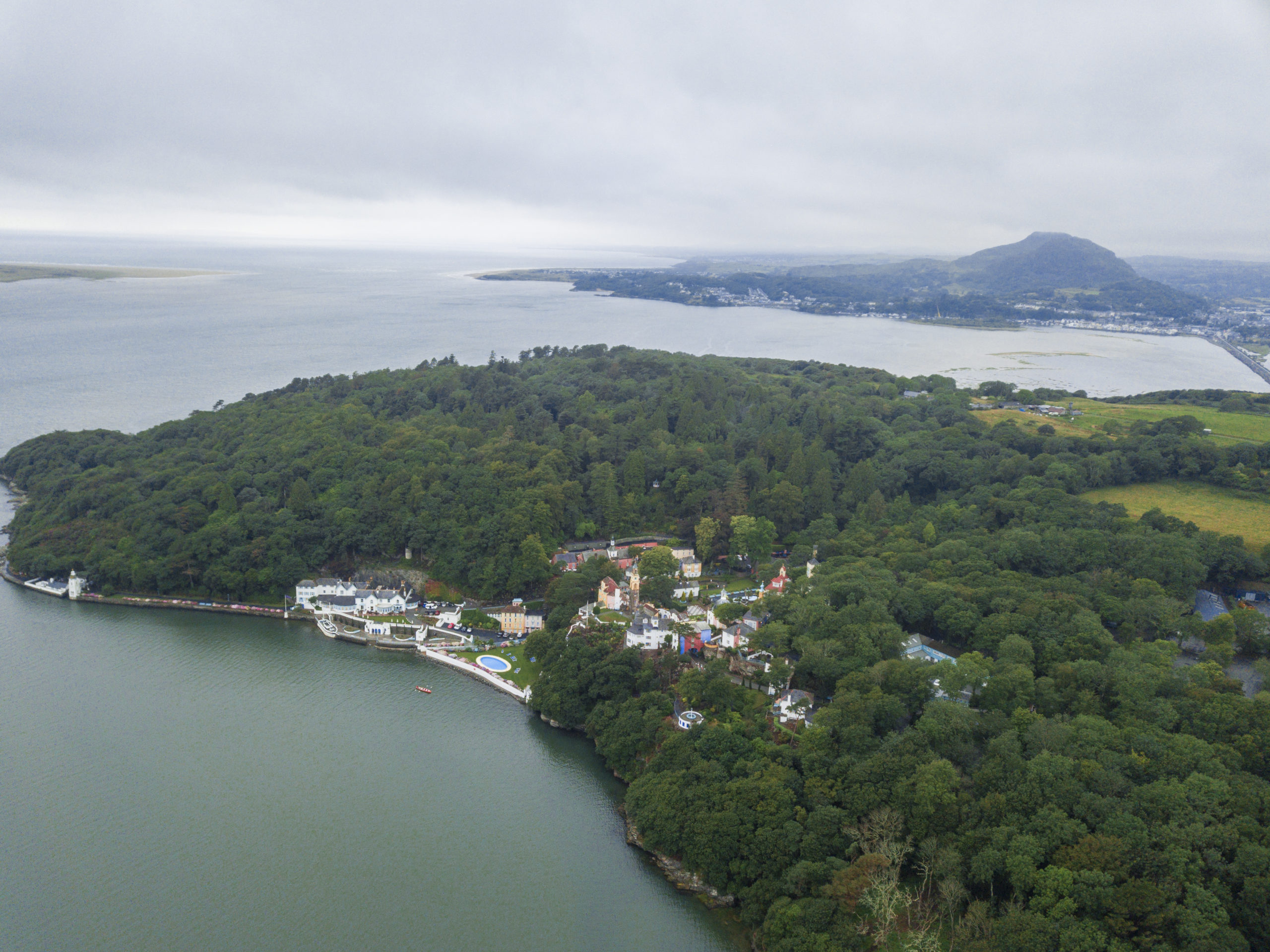 The last time I had the pleasure to tackle anything close to serious milage was in the Portofino’s predecessor, the California. Cast your mind back to the heady days of 2012. The Curiosity Rover had landed on Mars. Austrian Felix Baumgartner was breaking the sound barrier over New Mexico. And I was making good time en route to the Loire Valley to meet the Count and Countess de Vanssay. Whilst North Wales isn’t famed for its blue blood, or wine for that matter, Portmeirion is certainly fabled.

Built between 1925 and 1975 by Sir Clough Williams-Ellis CBE, Portmeirion stands today, largely, as one man’s fervent admiration for adornment. “As a child I just lamented that my lot was cast in Victorian non-conformist Wales, instead of in some such sparkling setting as decadent 18th century Venice. Where I would, of course, have had my father, a dilettante prince, with a baroque palace, a state barge, painted ceilings, glittering chandeliers, banquets, masked balls, processions, fireworks, the lot. All my life I have had consciously to fight back my innate and inordinate craving for gorgeous elaboration, regal splendour and even mere opulent display, this vulgar profusion should ever whelm my embittered sense of fitness and propriety”. 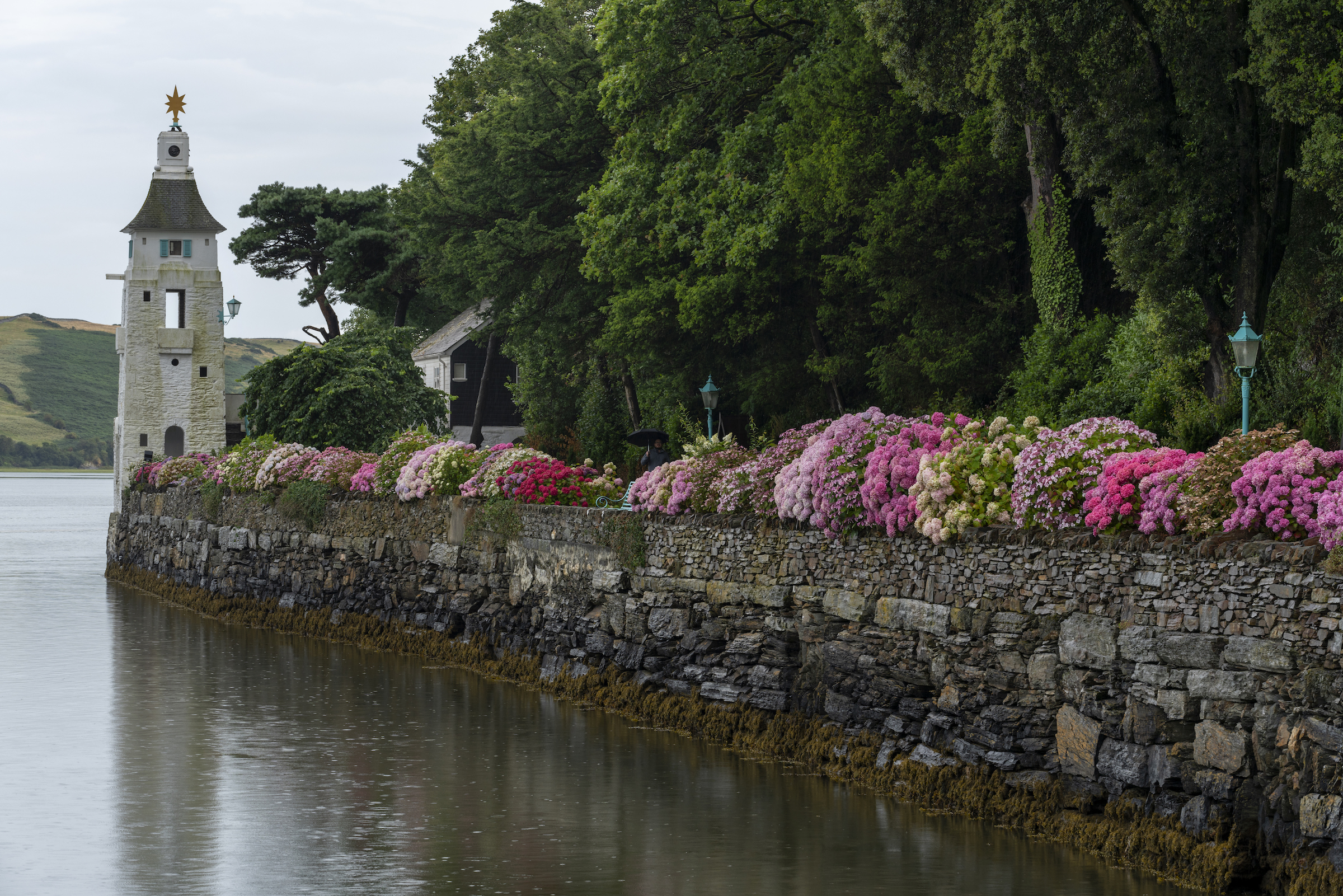 Sir Williams-Ellis was shaping up to be exactly my type of eccentric: despairing of functionalism and Brutalism.

I had visited Portmeirion as a child and returning as an adult (in some sense of the word), I was finding the village even more enchanting. As I strolled the 70-acre site, with its classical piazzas, Italianate villas and grand sculptures, I came across a row of shops with faux Dutch gabling. Many of the facades that adorn what remains of the ‘original’ buildings are pastel-shaded illusions. After the first and second World Wars, architects were gleefully demolishing a great number of Britain’s architectural gems. Sir Williams-Ellis had become prone to purchasing parts of buildings in disrepair and importing them to his burgeoning estate. It was politely referred to by the great man as ‘a home for fallen buildings’. Its distinctive architecture is just one of the reasons that British sci-fi show The Prisoner chose it as its main location.

With supper coming ever closer and British summertime in full retreat, I made my way through the village to the hotel. It’s the older sister property to Castell Deudraeth and sits on the edge of the estuary of the River Dwyryd. Even if it didn’t have four Ferrari’s parked outside, it would still be considered lavish with its carved Renaissance fireplace and chequered floors. As the weather had turned, I visited The Cockpit, a bar which was originally fitted with timbers from HMS Arethusa, the last man-of-war ship to sail into action. Portmeirion is certainly a welcome escape from modernity.

The following morning, after breakfast, we agreed that the other guests at the hotel might have forgotten to set their alarms. So, without malice, we helpfully ignited a series of twin-turbocharged V8 engines to help them rouse from their slumber.

‘Ladies and gentleman, the Portmeirion Philharmonic Orchestra with their rendition of La Traviata, by V8’. Is there anything more affecting than the resting giant that is an engine made in Maranello. Its 3.9-litre, turbocharged V8 cannot be silenced. 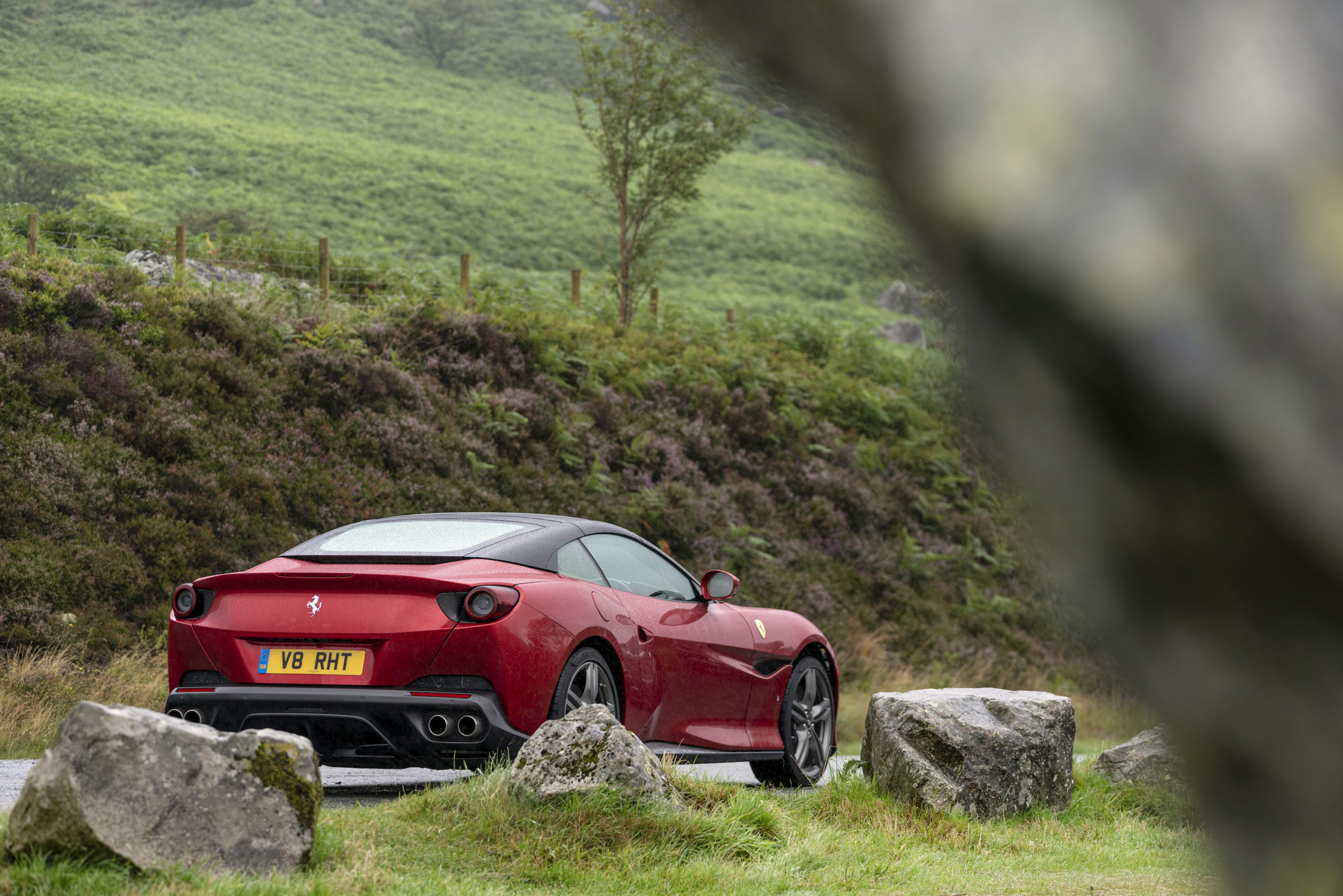 Proportionally the Portofino is longer, wider and lower than its predecessor. Which is impressive when you consider it shares the same 2670mm wheelbase. The new marque traces its roots back to the Daytona, arguably Ferrari’s first modern GT car. Front-engined, rear-wheel driven and convertible might make it a familiar sight. Consider it a coupe and convertible 2+2 engineered into one.

With the weather getting worse, I hastily loaded my luggage into the boot. Whilst you’re always going to be limited on space in any sports car, it’s worth mentioning at this juncture that this could well be the easiest Ferrari to live with ‘on the regular’. The front seats have been shaved down to be thinner than its predecessor, which means watching your more-portly pals thumb themselves into the back seats is now far less entertaining.

Aesthetically, the Portofino sits aggressively on its haunches. Designed at Centro Stile, that coupe contour flows through the bodywork with the air intakes that sit either side of the headlights, ventilating into the front wheel arches. This results in the airflow running out and along the bodyside to reduce drag. Did I mention that it’s obviously achingly beautiful? That’s a given though. Put plainly, the Portofino is a handsome SOB.

Our morning destination was Pen-y-Pass, a well-known stop off and starting point for those looking to walk Snowdonia in the rain. As expected on arrival, the vista was breathtaking; the usual rocky landscape replaced by a typical blanket of Welsh fog. This didn’t have any effect on the interest of the walkers in the car park though.

“It’s an automobile. A four-wheeled cart if you will, madam. There is no horse though, it’s powered by a small Italian wizard under the bonnet who is knocking back double espressos at a rate of knots”.

At this point, we all know there is no one on the ideological spectrum that doesn’t roll their eyes when faced with this line of avaricious questioning. Luckily for my first interrogator, you’re more likely to meet a fellow petrolhead when driving a bright red Ferrari than any other marque.

“It’s the new Ferrari Portofino. It’s basically war in seven gears and you don’t need to be Croesus to own it,” a voice boomed from behind her. Hello, new best friend. Be eternally prepared to carry the baton that furthers engineering and emotive heritage to the four corners of the world when you own a Ferrari. You owe it to yourself and to every little girl or boy with posters, no, screensavers on their tablet of the latest Maranello has to offer. You will be stopped in the street, men and woman carrying small children will point and stare. And if you’re a good sport, you’ll offer to bundle their spawn into the driver’s seat for a picture. You’ll do this, not because you enjoy paying your detailer more, but because that initial spark of interest in engineering has to stem from a common exchange. Il Grande Vecchio must’ve had the same spark passed onto him, otherwise we wouldn’t be driving down the A498 in the first place.
As far as tarmac goes, this 90-minute stretch up the A4086, A5 and A470 was some of the best driving roads I had seen in North Wales. It’s testing terrain in the wet, as in most cases you’ll meet your maker via a drystone wall or a loch if you put a foot wrong. That doesn’t mean I wasn’t driving without conviction. When you press the 3.9-litre twin-turbo into service and engage the seven-speed dual-clutch transmission, the Portofino will hit 60mph in 3.5 seconds. You’ll get a loud and stirring soundtrack from the V8 that’s raw and unbridled. It’s immediate and immersing engine notes are most attainable just above 2000rpm in sport mode. As you race up through the gears on your way to 199mph, the Portofino is incredibly forgiving though. So much so that more than a few will begin to develop artificial confidence. Note, this confidence is on loan to you from Ferrari. If you really want to test your minerals, turn off the traction control and sign your donor card. 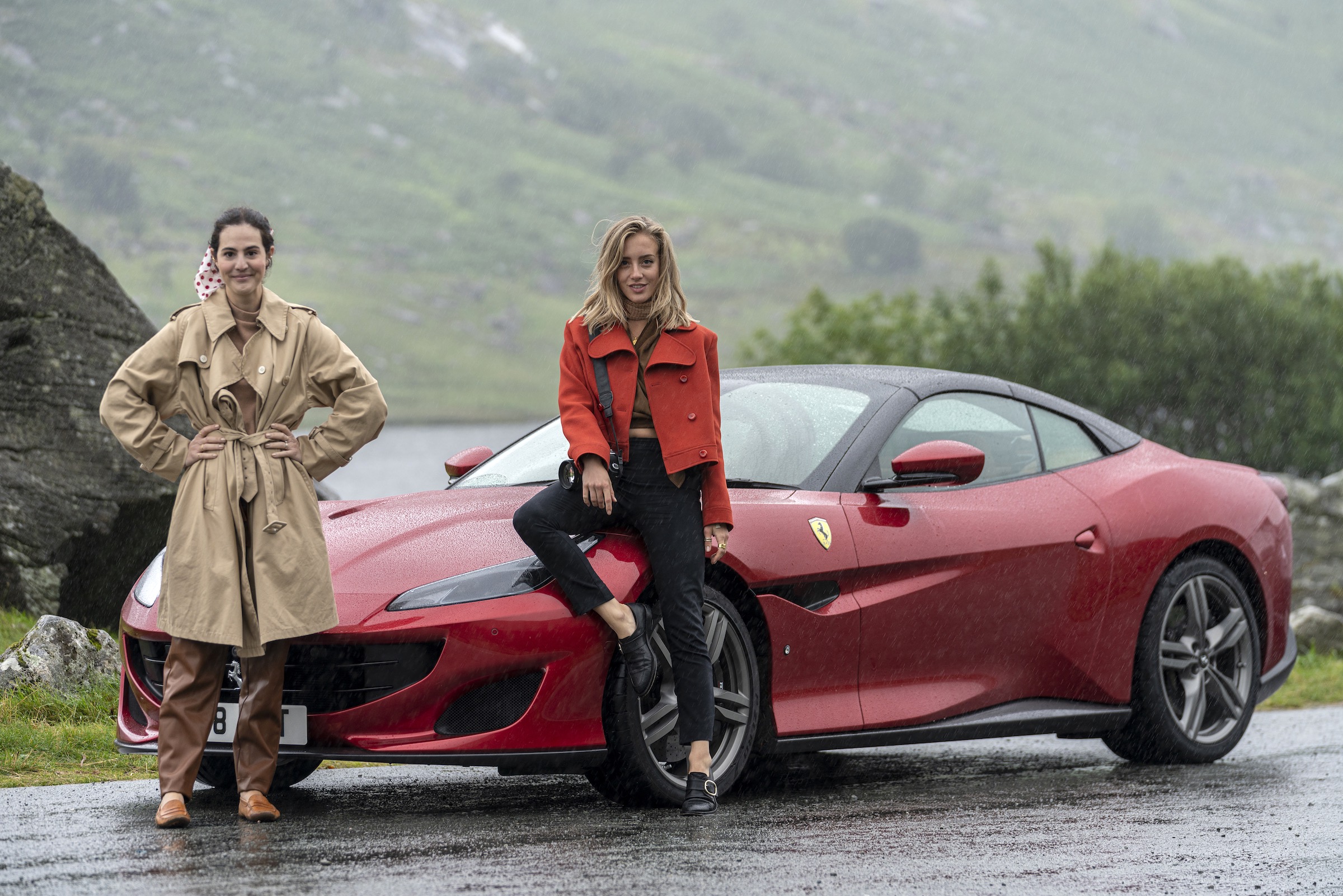 The stakes were raised somewhat when we realised we had taken a wrong turn and arrived in a town some 30 miles away from Bryn Williams restaurant in Porth Eirias. Nothing focuses the mind like an honest-to-god deadline though, and had we been paying more attention to the directions and less in the pursuit of that perfect engine note, we might have stayed the course.

Suffice to say that the Portofino is absolutely more usable than its rivals in the same price range. The 591bhp engine is a work of art and, at £165,000, it isn’t prohibitive to those new to the marque. Be warned though: the Portofino is a gateway drug to its more aggressive and addictive siblings. What starts as a passing fancy could well end up becoming a collection.

It seems a little on-the-nose titling any editorial after the name of the yacht. But given the gravitas of the Nemesis project, I thought I would cut to the chase. Not since the 118 WallyPower have I been so enamoured by a vessel. A 101m autonomous hydrofoil catamaran with a beam of more than 39m is worthy of the Thomas Crown Affair, by my standard.