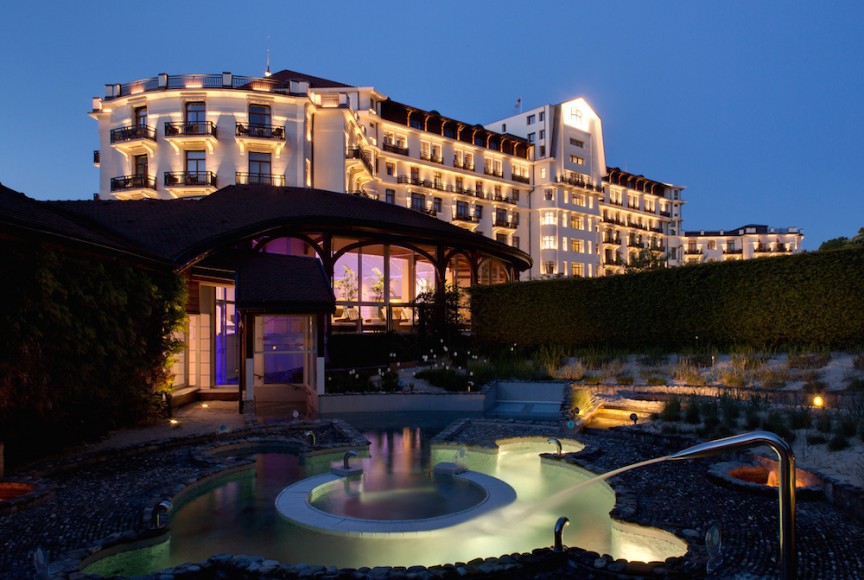 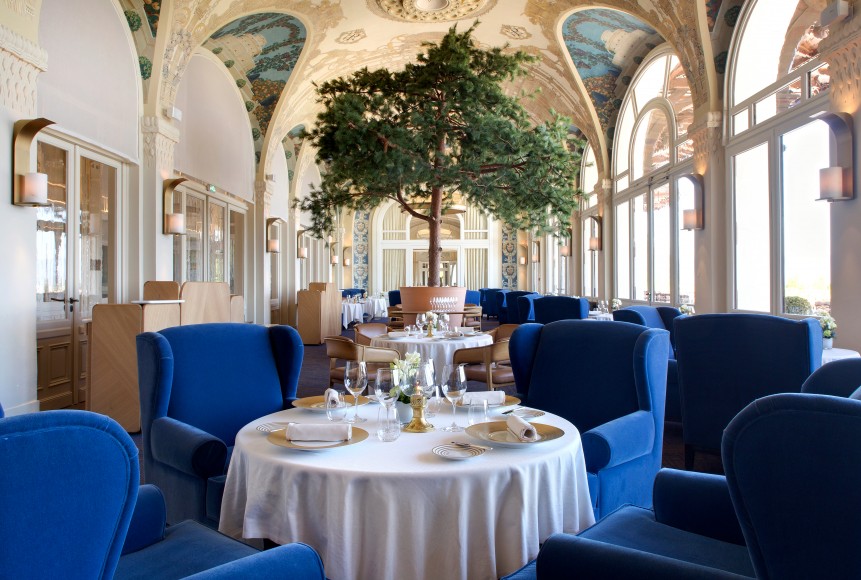 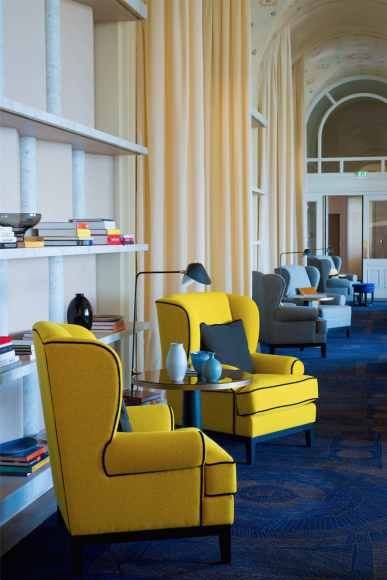 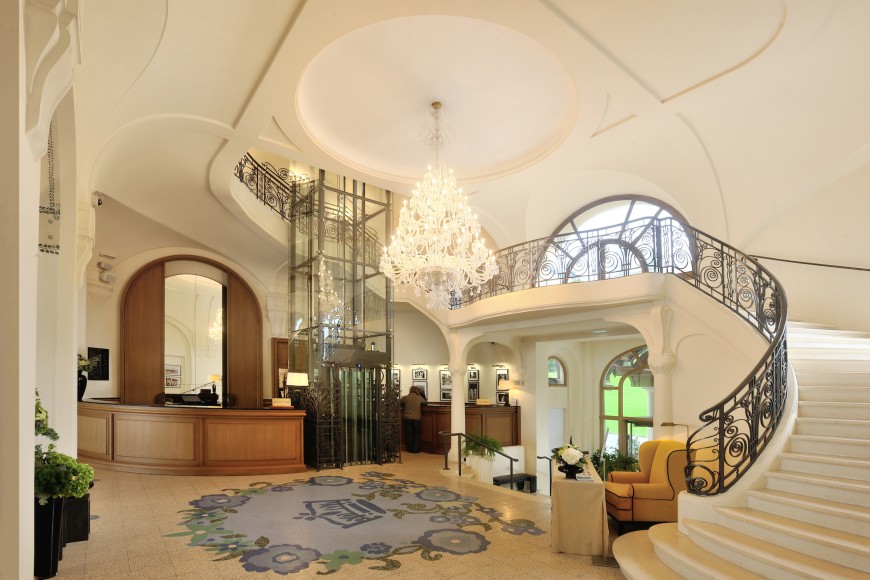 The fascination of ‘taking the waters’ for health and well-being seems to be imprinted in the human condition.

From the Turkish baths of the Ottoman Empire, and the great bathhouses of the Roman Empire, to the modern sophisticated spa, we have used water as part of many social, physical and spiritual rituals. Hot springs, cold springs, sulphur springs, sea water, river water, mountain water: this precious natural commodity has provided external and internal therapy for every generation and culture.

To review Evian, the source of one of the world’s best-known mineral waters, and home to the renovated Evian Resort, I jumped on the short flight to Geneva, crossing over the Swiss-French border to discover more about this extraordinary village, its history and magical waters, whilst also experiencing the equally-magical Evian Resort.

The Evian Resort is grand in every way, comprising of two hotels, three distinctly-different spas, a stunning golf resort and academy, a casino, and the extraordinary Grange Au Lac, a 1,200-seat venue crafted entirely out of pine and red cedar. A fascinating collection of best-in-class amenities, all born from one simple fact: that this area, with its unique geographical mix of lake and mountains, delivers one of the purist waters in the world.

The true birth of the Evian story started in the Belle Epoque era, in 1789, when the Count of Laizer, a man of science, discovered the benefits of drinking the crystal-clear, ‘easily-absorbed’ mountain water that surfaced in four original springs in Evian. The unique nature and composition of the mineral water, after its extraordinary 15-year journey from raindrop to spring, through a hydro-geographical site formed over 35,000 years ago, is simply a miracle. And no surprise, it has been drawing people from every corner of the earth ever since it was discovered. Indeed, Evian is considered to be the most evenly-balanced mineral water on the planet.

The first thermal baths started attracting the European bourgeoisie in 1824, who came to take the waters for its proven healing properties. Whilst our European ancestors may have started the trend, it is one that we’ve continued with as much vigour to this day. In fact, the therapeutic benefits of Evian’s water are formally recognised by the National Academy of Medicine, allowing many doctors across Europe to prescribe regular visits to Evian to embark on a specific health programme related to rheumatology, bone and joint problems, digestive and urinary complaints, metabolic disorders, as well as help with overall health and well-being.

Unsurprising, therefore, that Les Thermes Evian is at the heart of the Evian Resort, a stunning, light-filled contemporary thermal spa that sits overlooking the majestic Lake Geneva and offers over 30 therapy rooms, one thermal pool, two steam rooms, one sauna, three training rooms, and one leisure pool. Refurbished in 2012, by architect Oliver Chabaud, the spa blends views of the lake with the snow-capped mountains. In turn, this creates the perfect balance of a medical clinic and relaxed atmosphere. Visitors benefit from over a century’s experience of using Evian’s powerful natural resource, with the very latest techniques to help heal and rebalance the body.

The spa’s vast list of hydro-treatments is matched by a list of aristocratic, celebrity and well-heeled guests, who have travelled over the years to enjoy this stunning place and imbibe the water. Indeed, as discerning travellers came to take the waters at Evian, so a collection of glorious facilities emerged to host, entertain and fulfill their needs.

In 1905, the Evian Water Company commissioned the construction of a luxury hotel and named it in honour of the prestigious guests that it was geared to host. Originally designed by Jean Albert Hebrard, the hotel is a true grande dame of her era, sitting majestically like some sort of cruise liner overlooking the Lake Geneva in over 45 acres of pristine, manicured grounds; her style is a mix of Art Nouveau and Art Déco. This hotel exudes class and elegance, as if you’re stepping back in time to an entirely more genteel existence.

But the hotel’s past was not always glittering, having served as a grand convalescent rest home for wounded soldiers who, during World War Two, came to recover from physical and mental trauma.

In 2012, under the guidance of interior designer Francois Champsaur and historical architect Francois Chatillon, this highly-regarded Centennial hotel was restored to its former radiant glory, whilst introducing a sprinkling of contemporary style and design. The result is beautiful. Both  grand and gracious, it is situated in the most prestigious of locations, offering all the comforts and mod cons that you could wish for. The Royal offers 150 rooms and suites, a chic bar, La Veranda and L’Oliveraie and, its showpiece gastronomic restaurant, Les Fresques, which offers signature dishes that truly celebrate the local produce.

The Royal also boasts its very own spa, the Evian Source, which unlike its sister spa, is less contemporary, but oozes light and serenity with its indoor and outdoor infinity pool, an outdoor hydro contact trail, aqua gym, jacuzzis, steam rooms, sauna and gymnasium.

The Royal has a dedicated sport and culture team, who are on hand to arrange anything and everything, including skiing, dog sleighing, paragliding, mountaineering, hiking, canyoning, white-water rafting, sailing, or water-skiing on Lake Geneva. They even offer a full-rental service, so you can fly in with just your overnight bag and they will kit you out from head to toe.

For a more relaxed family stay, The Ermitage, situated a short stroll from The Royal, offers a quieter splendour. Built in a grand Savoyard chalet style, the hotel neither sacrifices the breath-taking views of Lake Geneva, nor the excellent standards of service and design. Like its sister hotel, The Ermitage also has a history of attracting the chicest of guests, particularly in its early days, before becoming a dedicated hospital.

The Evian Water Company has taken the hotel back to its halcyon days and created an entirely more intimate atmosphere, with big log fires, bars and games rooms, as well as numerous restaurants including La Table, La Biblioteque, Le Birdie and La Chaise Longue.

The spa here is the Spa Quatre Terres, which has nine treatment rooms, a relaxation area, a gym, sauna and steam, as well as two heated pools. So, after a day in the mountains, you can return to this haven to be pampered, before curling up next to the fire with a book.

The golf course, made in 1904 , was one of the first ever courses opened in France. This 18-hole green and academy features an inspiring alpine backdrop and views overlooking Lake Geneva. The ‘mineral’ par-72 course and its facilities deliver the same standard and attention to detail that are so apparent at every place that make up the resort.

Whilst it may have originally been the purity of the water that drew people to Evian, this resort and the riches of the local area, are what makes it even more special now.

Evian water may be pure, but the Evian Resort is pure luxury.

I’ve never considered myself to be driven by numbers. I’ve also never felt the burning desire to open a line of conversation with a statistic, but we find ourselves in situations without precedent.