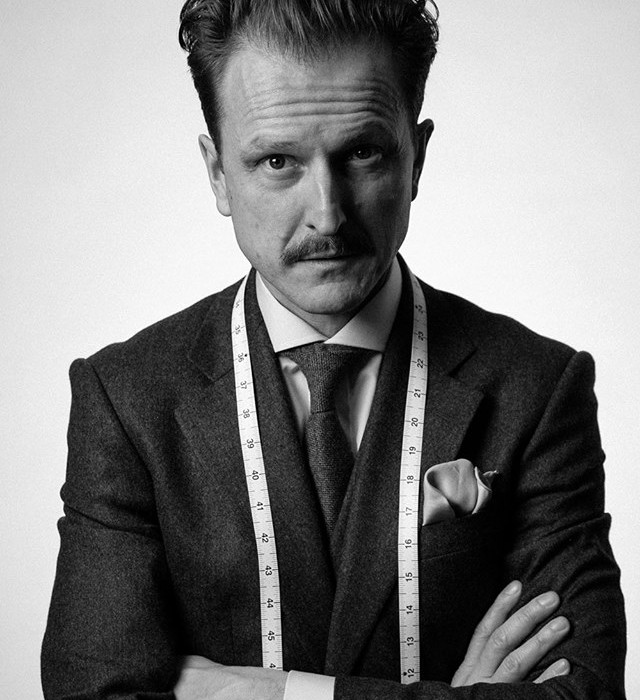 A friend recently introduced me to the new owners of Fox Brothers & Co., the last remaining cloth mill in the south west of England. Accepting an invitation to visit the showroom at their mill in Wellington, Somerset (given that I live just an hour away in Bristol), I was keen to learn more of Fox’s provenance.

The mill itself is no longer in its original location, but driving through the country lanes en route, one can see the original Georgian red-brick buildings in the distance – and how majestic they are too.

Fox once employed 5000 staff. Or perhaps it would be more accurate to say that the company employed Wellington, as it was, at the time, the largest employer in the area – not dissimilar to Clarks, also in Somerset, whose shoe empire built the village of Street.

Before I’d even entered the reception of the mill, I could hear the clatter-clatter of some original looms, weaving some of the finest cloths in the world. To the front of the mill is tailor Brian Smith’s workshop. Brian was master cutter for Huntsman for many years, but now works his sartorial magic in the surroundings of this mill, which he is very familiar with (tailor’s nirvana?). And there, in the window of Brian’s workshop, was the cloth that had eluded me my entire tailoring career: the Prince of Wales check flannel. Its mix of autumnal-coloured yarns, ever pleasing to the eye, almost brought a tear to mine.

And the PoW is not the only true British classic that Fox Brothers produce, as their archives proved. To say I was in my element, perusing the tomes of cloths produced over the past hundred or so years, would be putting it mildly. The selection of wonderful worsteds and flannels (for which Fox are renowned) seemed endless, yet so of the moment. It is encouraging to see a business, founded in 1772, not only flourishing and upholding such time-honoured tradition, but also being so relevant to modern style.

Of course, suits are currently enjoying something of a renaissance, and have been for a number of years, but there’s nothing quite like following in the footsteps of some of our greatest sartorial icons. Here are just some of Fox’s discerning and well-known patrons.

The Duke of Windsor: king, sartorial hero of mine, and once bearer of the title HRH Prince of Wales. Edward VIlI may not have been the namesake of this beloved cloth, but he certainly did much to promote it. So, whether you are a renaissance man (like me) or simply a classic dresser, there is surely nothing more hallowed than sporting a suit made of cloth of such provenance.

The Rugby Players Association launched the ‘Lift The Weight’ campaign in 2017. A Professional Players’ Federation (PPF) survey of retired players revealed 62 per cent experienced some sort of mental health issue. We sat down with James Haskell and Damien Hopley, RPA Group Chief Executive, to find out why it is so important to #lifttheweight.