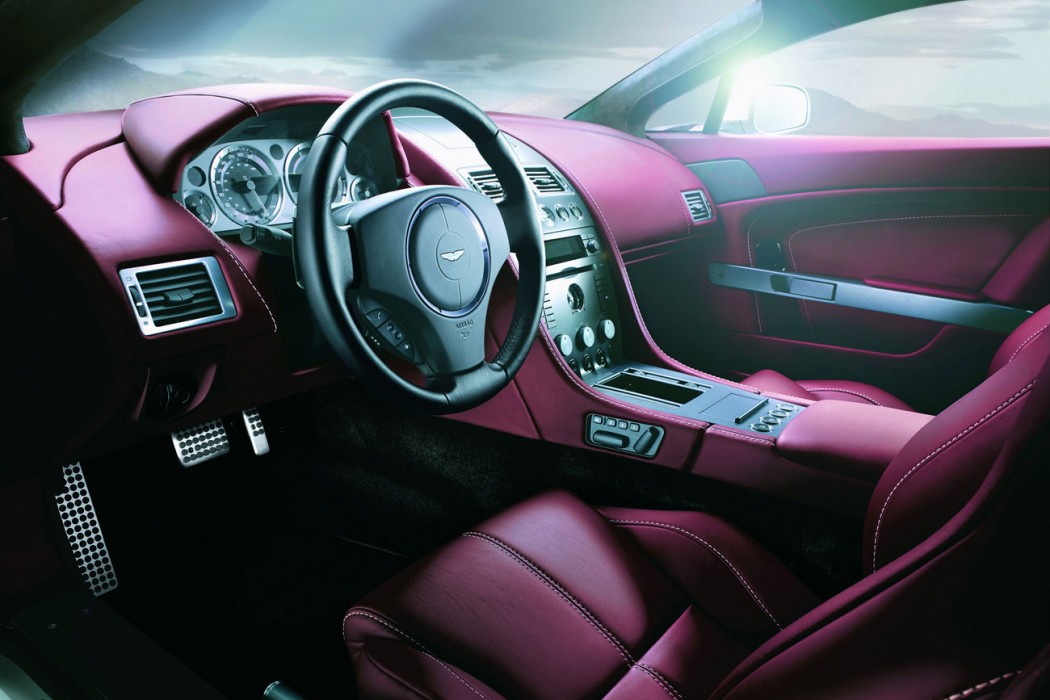 I sat there, motionless, in my own deplorable car, watching the 2013 V8 Vantage get smaller and smaller in my rear view mirror. Perhaps if I careered into a post or a wall the team at Aston Martin might take pity on me and drive me to the hospital in it, giving me few more fleeting minutes of motoring nirvana.

How do you go back to anything other than an Aston Martin? I should have been given some counselling by a tenured therapist on how to cope with my grief.

Since its launch in 2006, the Vantage has had a number of tweaks and minor remodels. In 2009 we saw a V12 version and 2008 gave us an update that, I would imagine, was based on some sage advice from current Vantage owners: “Leave the exterior alone”. Of course there were many tweaks, all done with serious engineering prowess.

Our marque for the week was the 2013 V8 Vantage Roadster in Meterorite silver, boasting an impressive 4.7 litre engine with 420 bhp.

I picked up the Vantage up on an uncharacteristically sweltering British summer day. That’s right: summer, blue sky and warmth.

Having driven a DB9 before (if not somewhat briefly), I thought I would be at one with the Vantage’s ECU key system. Apparently not. It took more than a few attempts to grasp that one, but let’s not discuss my driving aptitude just yet.

My first impressions of the Vantage were that it was clearly a thing of beauty, modelled by the gods for those of us that were deserving enough. The Vantage is Aston Martin’s entry-level model, designed to entice a new generation of sports-car owners into the meld.

The interior befits the brand and is first class: leather that smells like heritage, a precise lever of a handbrake to the right of the driver that looks like it releases the oil slick, and a graphite centre console.

When the V8 starts up with the push of the key, all your worldly worries and cares disappear – least of all, because you can drive away from them, they would be hard pressed to catch you.

The Vantage immediately feels weighted and hunkered down. Even at low speeds it feels concise and solid. For something with a curb weight of 1710 KG, 200 pounds more than the coupe, it is planted, to say the least. You wonder whether the clever chaps at Aston Martin have installed a small electro magnet somewhere out of sight.

I’m only 30 seconds down the road and faced with a set of traffic lights that appear to change every 20-30 minutes. As the weather was unusually hot, I decided to pop the roof down (this can also be done at 30 miles per hour I’m later told!). Having popped the roof down, done the iPod dance (in order to listen to motoring classics), I sit waiting for the red glow to appear up ahead. There is no one ahead of me; only the open road and an hour drive back to the office in Bristol.

Change, change, change! RED! In my haste, misjudged the clutch placement and found myself sat there, head in hands, having stalled the beast. What was worse, no one passed me! I don’t know if there was some misplaced sense of respect, because I appeared to be an Aston owner, or pity because I couldn’t drive it.

An eternity passed. I took out the key and pushed it back into the central console and waited. Nothing. Two attempts later and the engine roared into life. Unable to withstand further embarrassment, I planted my foot on the clutch and the accelerator and shot off towards what appeared to be a recently-green, amber light. “Was I committed?” I asked myself. Having driven the car for less than five minutes, three of which were spent stationary, I didn’t rightly know.

I decided to crawl forward. Not only would i have to sit in the same traffic with the same perturbed motorists that I had already let down, but I would run the risk of having the Vantage back later than planned for its video shoot with the team. With a roar that would have silenced a pride of lions and enough torque to displace the continent, I headed towards the ‘light’. With my head sucked to the headrest, I found it somewhat hard to comprehend the spectrum of colour. All I knew was that 420 BHP sends the Vantage forth in refined pleasure: 0-60 in 4.7 seconds.

As I sailed through the lights, I realised that I had been the only one to escape the clutches of the industrial estate. I gave a brief thought to my fallen brethren, and then sped off up the road with an eclipse-size smile on my face and a V8 engine note that is well-bred and screaming at the same time. A rock opera if you will.

It was a bank holiday weekend, so traffic had amassed on my way back to deepest Somerset. No matter. I was more than happy in the left lane, assessing the Vantage Roadsters mid-range cacophony. The 2008 update saw an 11% increase in BHP and a 15% increase in peak torque taking it to 470 Nm. This increased the mid-range performance and gave the Vantage an even higher top speed. It also made it more fun for my good self (my thanks to the dedicated men and women at Gaydon, he gushed).

With time on my hands and average traffic speed at 50mph, I decided to put the rear mid-mounted six-speed through its paces. I have to say, the driving position and control placement was excellent. I had that inexplicable feeling running through me that made me want to push forward harder. The 160 W Aston audio system kept me company for the duration – even with the roof down. I have no idea what I looked like. I was “that guy” – roof down, hair dramatically blowing back, iPhone, car and driver all wrapped in a death grip and completely smitten.

I honestly wish I could be less gushing about the V8 Vantage Roadster, but you would have to be mad to not find it desperately attractive.

As I cruised into the home straight, I parked the Roadster out front and headed upstairs to grab a change of clothes. When I returned, it appeared that some of the neighbours had popped out onto the balcony to pass judgement. It was reminiscent of the old senate chamber.

Having mentioned our ‘automatic’ cousins, I will take this opportunity to say I have been told that the six-speed manual is much more fun than the sportshift II seven-speed automated manual. However, this comes from friends, rather than personnel experience. I imagine it has something to do with a sense of loyalty to ‘proper driving pedigree’. Personally though, given my ‘coughs’ clutch issues, one might suggest the automatic might be proper for me.

Anyway, my neighbour Michael looked down approvingly, raised his eyebrows and gave me a thumbs up. 50-plus speak for “Bloody hell, you little bugger”. I don’t think Michael immediately recollected what I do for a living and so perhaps judged my apparent purchase too quickly.

I slid back into the full grain leather seats, pushed the key into the ECU and waited for that V8 to silence my onlookers. Eyes widened, nostrils flared, hearts palpitated and my wish-list was cleaned out and replaced with one single item.

Having made it to the shoot early, I decided that it was worth taking the Vantage for a little spin around the edge of the city. The M5 had been a long smoking trail, but what the Vantage really needed were some corners to eat.

Obviously the Roadsters rigidity is a little reduced from its coupe older brother, but it is still an astoundingly well-balanced sports car. The steering is weighted and it takes 3.1 turns lock to lock, so not the quickest, but why would you possibly spend that much time parking? You’re in your Aston, just explain to a fellow motorist how the feudal system works and request that they move their vehicle from its spot and allow you to park.

In the corners the roadster holds on like an 80s bond villain being kicked out of a plane. It holds and holds and holds beyond the realms of what is physically possible. It feels firm and unshakeable.

As I headed back into town and into Clifton Village, imagine my shock as an identical Roadster came towards me. We both slowed half-heel, nodded in agreement that we were indeed kings among men and sped off, wondering about what the others do in this world.

I sometimes wish we had pulled over for a proper discussion about the car – who better than an everyday Aston owner? Surely he would have realised that the car wasn’t mine and that I didn’t know the secret handshake.

With that missed opportunity, like the rest of my everyday issues left at the side of the road, I headed back to the studio to park in the Aston, ready for its interior shots.

As I sat across the road from the studio waiting with the car, listening to it cool down, I pondered the fuel consumption. There are many ways to skin this particularly beautiful cat, but our reality was around 19MPG. The Aston will, however, hold its value like nothing else available in its class.

I would live and fall in love with the Aston for another four days that week (and still, some two months later). Reliving the moment I handed it back is still too much to bear.

The V8 Vantage Roadster has a price tag of £84,995 – a great entry level price to the analogues of motoring history we feel. It makes what is arguably one of the finest engine notes on the planet and its unparalleled beauty is worthy of a place in MoMA. If you are aren’t considering investing in this icon of modern British motoring, then hand your subscription to The Review at the door on your way out.

It’s the final adornment before an evening well-lived. Finding a signature scent amongst the abundance of musky, floral, citrus or even woodsy notes is a time-honoured tradition amongst the many perfume counters and white-glove perfumeries across Europe.