Like many Swiss watchmaking dynasties, Alpina can trace its founding back to the turn of the nineteenth century – 1883 to be precise – by Gottlieb Hauser, a watchmaker in Winterthur, who also established the Swiss Watchmakers Corporation (Union Horlogère Suisse).

Given I came into this world kicking and screaming in 1983, where exactly is the Alpina brand now, over 130 years on?

Alpina describe their modern-day fans as Alpinists – be that on skis, board, skates, on deck or underwater. The brand focuses on producing sports watches that perform in challenging outdoor environments, whilst respecting and implementing the ‘Alpinist Principle’ in design, manufacturing and technological innovation.

I was decidedly far away from the Alps when I first encountered the brand at a charity event in Bristol in 2013. Has ever a more effete occasion been put forth than the stalwart of all CSR events, the charity supper. You know at some point someone’s going to either invite you to the silent auction table or wave raffle tickets at you, until you relent and spend over £100 with no godly idea what’s in the line-up.

I opted for the direct route and took myself to the silent auction table solo. Amongst the usual suspects was a bright yellow dive tank. Too small to be real and too big for my action man, I decided to check the branding on the tank to get a read on what exactly it was. Perhaps by design, the vaulted cellar we found ourselves in had absolutely no wifi. Other than to take donations one expects, it was all rather Eyes Wide Shut.

Upon further inspection, the dive tank contained a rather smart Alpina Extreme Diver watch. With the entrée on its way, I scribbled a figure on a piece of paper, so not to appear rude, and placed it into the box beside the tank. 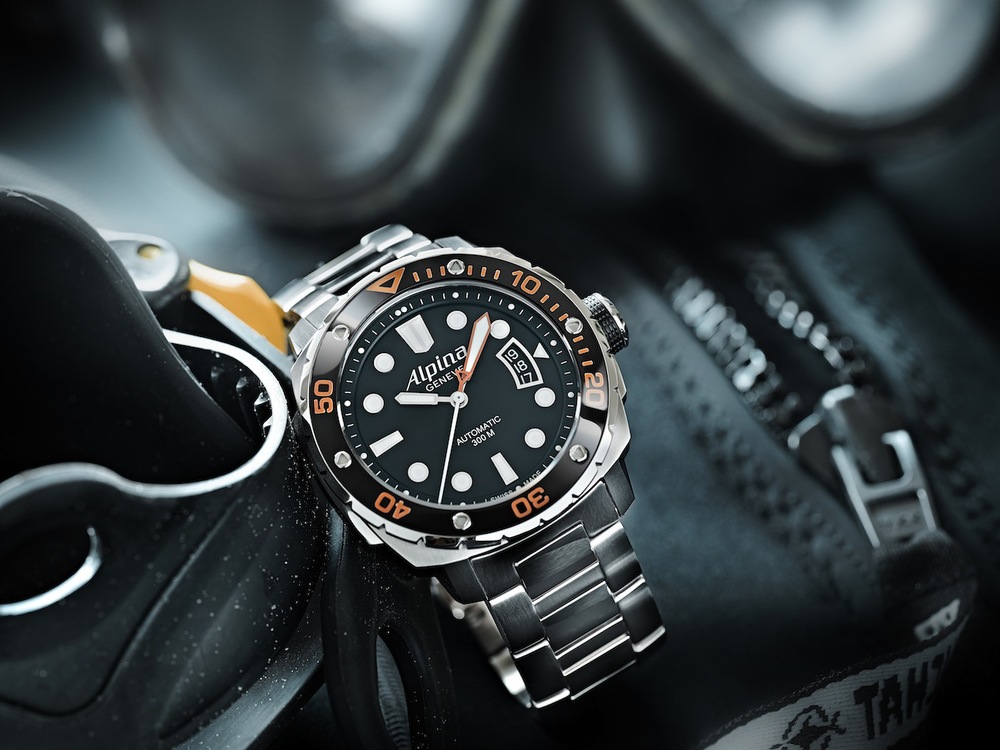 Throughout the evening, I considered returning to up my bid, but by that point in the night’s proceedings, the crowd was no longer concerned with fiscal responsibility. I learnt the following morning that I hadn’t won the watch. No one had. It hadn’t met the reserve. Despite the brand’s lineage, it was a veritable unknown in the mass consumer market until it was acquired by Frédérique Constant in 2002. Despite the fact that the purchaser was only established in 1988 by Dutch entrepreneur Peter Stas and Aletta Stas-Bax, they had enjoyed rapid expansion and success.

What would this titanic change mean for Gottlieb Hauser’s Alpina brand? Well, I wasn’t aware of the company’s rich history in 2013. My interest in the brand was a result of the new owner’s efforts to release new designs, like the Alpina Extreme Diver. And work their efforts did. I called the organisers of the event the next morning and asked if I perhaps doubled my bid, might I be more successful? With luck on my side, the Alpina Extreme Diver became my day watch and has remained so ever since. Yes, I have been diving with it, though only to 12 metres. The remaining 288-metre capability remains untested for now. I’ve also been skydiving, surfing and sailing off the coast of Belize with it. The only element that has ever needed replacing has been the rather fetching mesh bracelet, which was human error when tacking.

Alpina launched their first dive watch in 1969 and branded it the ’10 Seastrong’. It had a self-winding calibre, 17 jewels and you can likely find one on the market today for around €1000. The 10 Seastrong featured two crowns, one was responsible for determining the decompression time through a 60-minute rotating bezel. The other was used to adjust the time. As you might expect, both had waterproof seals, but the chronograph function did not work underwater.

Having only visited a handful of Swiss workshops and no interest in window shopping, I had not seen another Alpina in the flesh. Enter the Startimer Pilot Chronograph. As you might expect, Alpina has a rich history in the aviation space too. But to strengthen its modern day market position in 2017, it secured champion air racer Mike Goulian as its new ambassador, and became official timekeeper of Team Goulian in the Red Bull Air Race World Championships. I hadn’t planned to use the watch for anything near as daring. 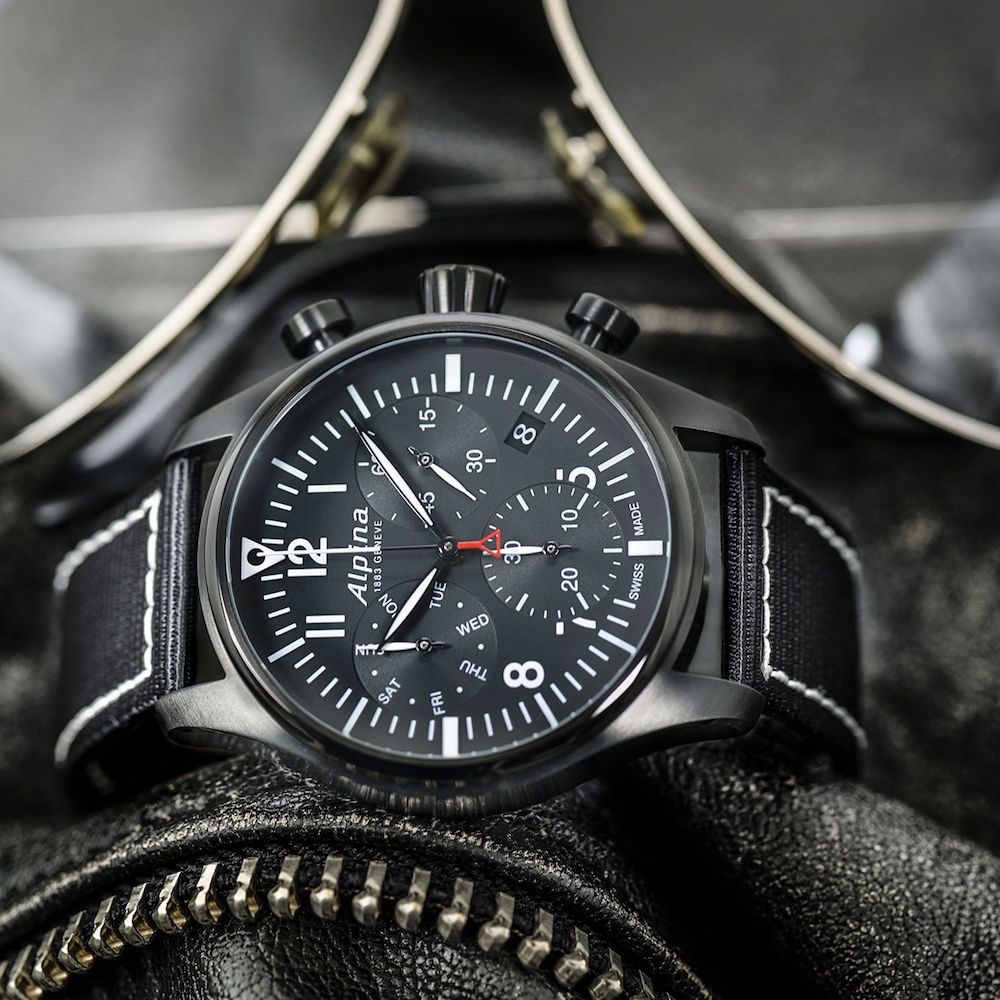 The Alpina Startimer Pilot series features a stainless steel 42mm case, with a fixed bezel and a scratch resistant sapphire crystal. It also comes in five different flavours covering three dial colours. We opted to test the all black version. The Startimer Pilot contains a Swiss-made quartz movement with a built-in stopwatch function. Each has a 42-mm steel case and tri-compax dials with small seconds at 3 o’clock, a 30-minute chronograph counter at 6 o’clock, and a day of the week display at 9 o’clock, along with a date window at 4 o’clock. All of this atop a Caliber AL-371. This piece has a water resistance of up to 330 feet/100 meters, suitable for a water landing from your plane presumably. As has become the staple, an engraved Alpina logo graces the solid, screwed-down casebacks. The models with a sunray navy blue dial are available with either a matching blue nylon strap or a stainless steel bracelet.

On an otherwise muted dial is the Alpina logo formed onto the second hand. The logo was developed from the Matterhorn mountain in Switzerland, which is 4,478 metres above sea level and overlooks the Swiss town of Zermatt. Having visited several times, I can vouch that it is one of the most majestic mountains in the Aosta Valley.

For me, the Startimer Pilot fell in line quickly, becoming another day watch I found myself pairing to understated outfits again and again. It even replaced the Extreme Diver in some cases. This is the second all black watch I have considered since acquiring the HotBlack made by British physicist and watchmaker, Richard Hoptroff. But without visiting the Alpina workshop, it is still hard to grasp a real-world idea of what the brand’s heritage means today.

Not to mention that, in May 2016, Alpina’s parent, Frederique Constant Group, was acquired by Japanese watch giant Citizen. This does nothing to dissuade me from being an Alpina brand fan. However, it does make me wonder whether some of the mid-priced range will hold their value.

The Startimer Pilot is listed on Alpina’s website at £644.50, though I’ve found listings for half that. This is, of course, good news for those looking to invest, but perhaps not so much for those who purchased at the top of the market. Not to mention at the sub-£3000 mark – are you really concerned with a three-decade resale value?

Frederick Forster joined Prescott & Conran in July 2012 as the head chef responsible for Boundary Restaurant, and Boundary Rooftop Bar & Grill. Earlier in his career, he won the Roux Scholarship, before going on to win the prestigious Craft Guild National Chef of the Year Award in 2011. What is the philosophy behind The Boundary Restaurant? Our philosophy is to produce consistently high-quality French based food using only the best and most authentic ingredients available in the UK and from France, creating dishes with simplicity and techniques that are representative of a first-class establishment. Seasonality is key, with the main ingredient of a dish always remaining the focal point….